This NGC group in Pisces under the Great Square of Pegasus is located about 220 million light-years distant. All but NGC 7780 are members of the WBL 727 galaxy group. All 5 are members of the USGC U860 group. That group has two other members out of my frame, one to the south the other to the northwest.

I was only trying for the WBL 727 group so the rest are just lucky to make it into the frame. Especially FGC 2548 which was also on my to-do list but I\'d not realized could be part of this image. I sometimes get lucky. It is better known as LEDA 091829. I was interested in the little red galaxy off its west ansa. Unfortunately, I can\'t find anything on it as it isn\'t in either NED or SIMBAD.

NGC 7782 is the only one large enough to show much detail. Notice how its spiral arms aren\'t connected to anything like a core. Also, it seems to have faint outer plumes regions to the north, south and east that may indicate it is still digesting another group member it ate in the past. In any case, it is very large. I get a size of 175,000 light-years including the plumes. Ignoring them it is still 115,000 light-years in size.

NGC 7778 is listed as an elliptical though one paper says it shows hints of spiral structure. NGC 7779 is a very fuzzy spiral, NGC 7781 has no detail at all and may be an S0 to my eye. It is the smallest member of the group at 55,000 light-years. NGC 7780 has some interesting spiral arms. Two may come from the core while two arcs appear to be bright extensions of these arms after they faded away. The southern one longer than the northern. It seems rather odd to me but didn\'t get a peculiar label.

There are a couple of distant galaxy clusters in the image. Neither have a cD galaxy so I\'ve drawn a line to the center position which is rather vague in NED. One has an estimated distance, how that was estimated I have no idea as NED doesn\'t say. The Zwicky cluster has no distance at all. It is quite large and may include the other cluster. Data on both is too vague to even hazard a guess. Another galaxy I hoped to find something on is the blue smudge of a low surface brightness galaxy southeast of NGC 7779. NED shows it only as an Ultraviolet Source found by the GALEX UV satellite. Apparently, nothing else has even noticed it.

This field is near the Zone of Avoidance so poorly studied. I was surprised I found as much as I didn\'t. Normally I don\'t include names that are just coordinates, just listing them as G for galaxy, Q for quasar GC for galaxy cluster etc. This is because their labels get huge and often overlap. This field had no such issue and with little else, I broke my rule and included such identifications even when no redshift data was available. Don\'t expect to see this very often. 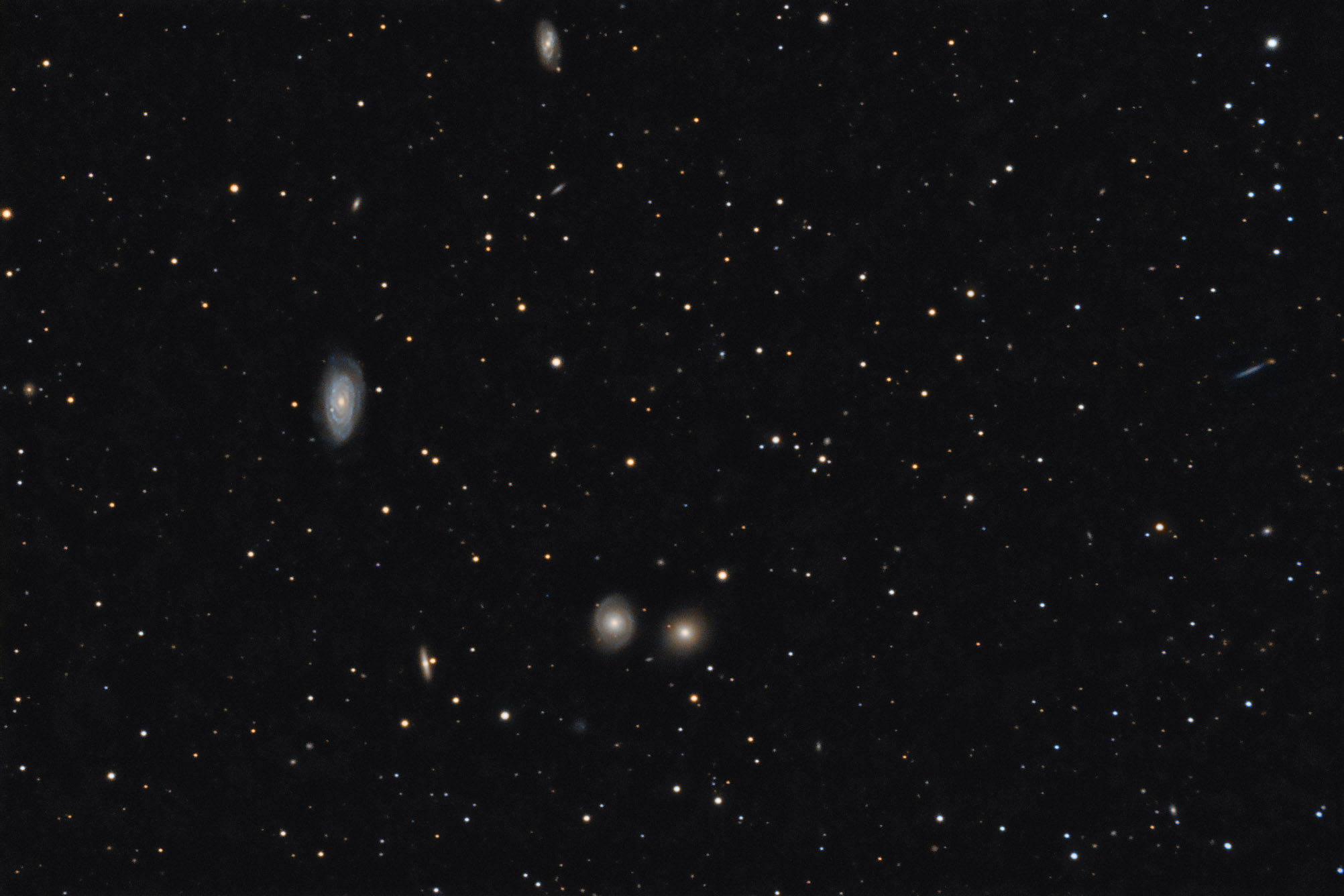 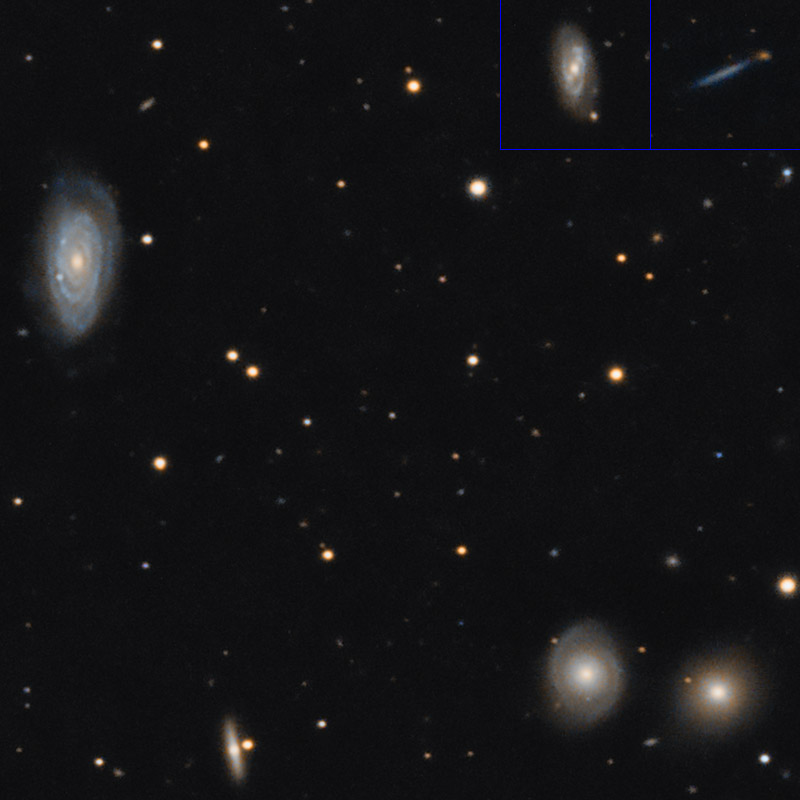 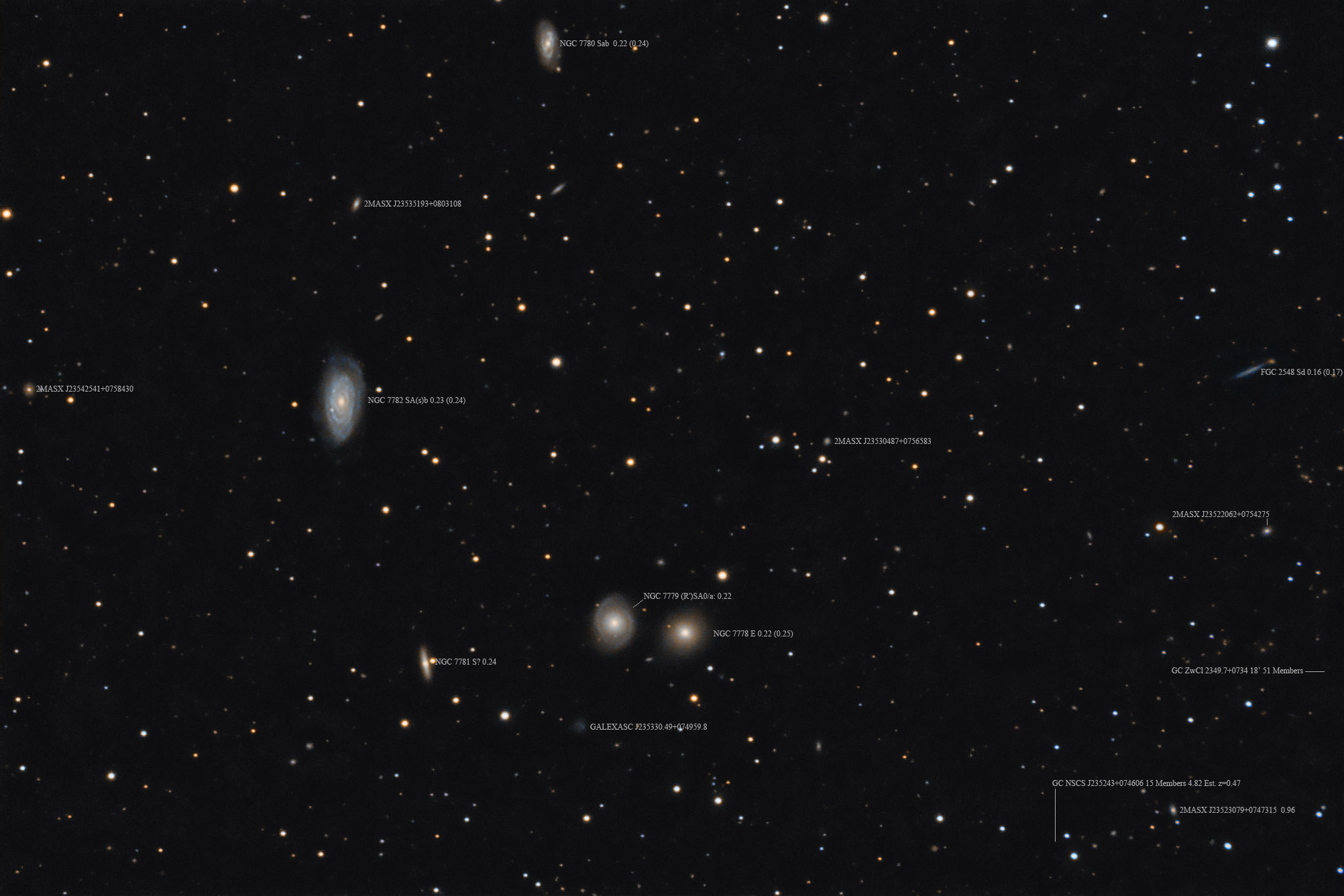