NGC 7094 IS a planetary in Pegasus not far from the famous globular cluster M15. The central star in this nebula is a rather odd star. It is known as a hybrid PG 1159 star. What this means is that it, first off, has an unusual amount of hydrogen left in its atmosphere. Secondly, it is a variable star. White dwarf stars are normally dead stars only giving off heat and light stored in them when their nuclear furnaces were still working. When they die they throw off the outer atmosphere that still has hydrogen, creating the planetary nebula, and retaining the core of heavier elements created by the nuclear furnace. They get a small amount of energy from gravitational collapse as they cool but they shouldn\'t vary in brightness. But some do. It is thought that the outer atmosphere of the star becomes more or less opaque depending on the ionization level of certain heavy elements such as iron in the atmosphere. It is this variation of ionization that makes the star appear to vary in brightness. In fact, it doesn\'t, it\'s just that the atmosphere blocks the light at times. Such cycles are very irregular. In this case, the star varies at a rate of 2000 to 5000 seconds. Since my exposure of this guy was 6000 seconds it may have varied 3 times during my exposure! Thus catching this isn\'t easy, nor would I try. I knew this before I took the image. What I didn\'t know was that it shares the field with a very faint galactic cirrus nebulosity. Since I didn\'t know it was there I severely underexposed the image as do most who take this planetary since the planetary is bright compared to the nebula. I need to go back and try a much longer exposure. But something is reflecting into my field. When I centered the nebula a rather bright ghostly nebula appeared to the west of the nebula. I have no idea where the reflection came from. To get rid of it I had to lower the object. Raising it didn\'t help. Since the nebula is mostly \"below\" the planetary that means I lost some of it. I can\'t find any reliable distance data for this planetary. Again, if anyone knows let me know. Contrary to the above galaxies, this planetary is a good target for a 10\" scope but have narrow band filters like the UHC or OIII handy as you\'ll want them to see more than a blob of faint blue light. It was discovered by Lewis Swift on October 10, 1884.

Conditions went from fair to bad during this exposure. The loss of resolution caused the blue and especially green frames to be \"defocused\" causing the odd blue-green halos around stars as well as making them larger than usual. Yet another reason to redo this one but I have such a backlog of objects not taken the first time it is hard to go back and reimage those I should. 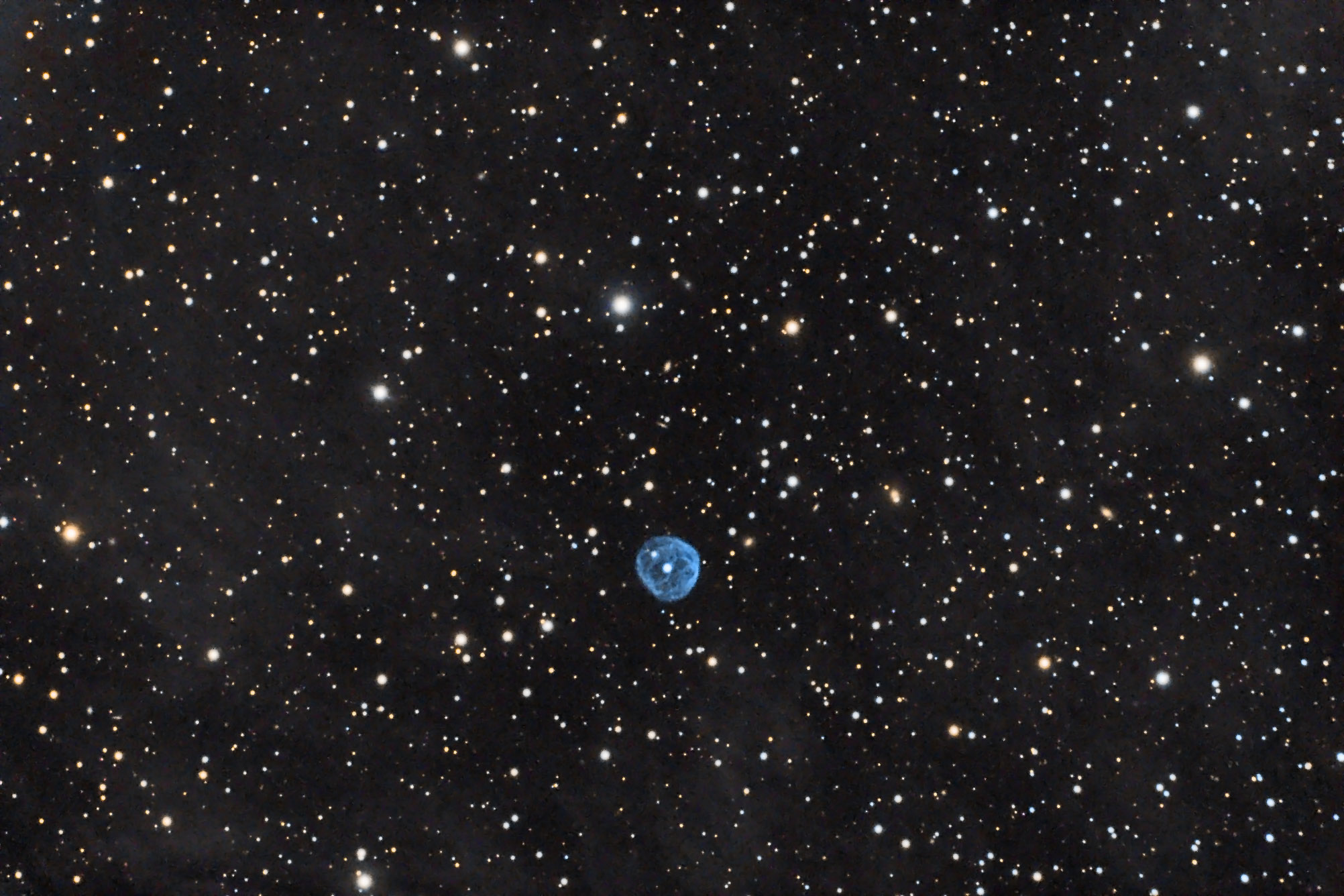