On May 31 at 20:59 UT asteroid (285263) 1998 QE2 passed within about 3.6 million miles of the Earth. It was daylight here and the asteroid below my horizon. That night it never got high enough to clear the walls of the observatory and it was cloudy with light rain in any case. The weather did clear on June 2, 2013 about 8:30 UT but by then the asteroid was in my Meridian tree and it was dawn before it came out. The following night we had broken clouds. It was high enough but looking low I was seeing too many clouds for decent images. Still, I had to try as the forecast (and actual weather) was for rain and clouds since then. I did manage 15 1 minute frames while tracking on the asteroid. Conditions varied greatly making this a processing nightmare that has taken me several long days to sort of make work. The clouds moved in during the 15th frame and totally hid the sky for a while putting an end to the movie which covers the time from 05:41 through 05:58 on June 3, 2013, UT.

After it \"cleared\" I had just time to grab three 10 minute frames in RGB for a starfield shot with the asteroid making a very long colorful trail. I assembled these into an RGB image of the stars and cloned out the asteroid but noted its position precisely at the start of this series. Clouds covered the frames more than it was clear so they are about equal to 3 minutes of color in clear skies but was the best I could do. I then aligned the asteroid trails using the brightest (most cloud-free) section of each trail. This gave me the RGB values for the asteroid which came out rather white with a slight reddish slant. It is said to be virtually black reflecting only 4% of the light it receives. I have no idea if my color is reasonable or not. Just what I got. I then stacked the 15 luminance frames of the movie to get an image of the asteroid and applied the RGB values I obtained from the color frames. I then put this image of the asteroid in the carefully noted position it was in when I first started the color frames. The color image is the result of this process.

Even with so little light, I was surprised to see another asteroid in the frame. One out in the asteroid belt. Since I was tracking on the stars it made a short colorful trail in the image. It is (10176) Gaiavettori at magnitude 16.0. 1998 QE2 was at magnitude 11.4. These magnitudes are according to the minor planet center as my data is too poor to use.

Even more surprising was that I captured a galaxy that is on my to-do list! Unfortunately, it is still on the list as I had so little data it just shows as a faint reddish blob. It is a neat ring galaxy much like Hoag\'s object. If the rain ever lets up I\'ll try again for it. It is the bottom-most galaxy on the left side of the annotated image. NED had no distance data for it but did for the much fainter galaxy nearby. The image also contains two flat galaxies from the 2MASS Flat Galaxy Catalog. Few frames contain one by random luck. Two is very surprising. All galaxies in NED with redshift data are noted in the annotated image as are a few of the brighter ones without distance data. Far more were listed but my extremely limited data prevented me from seeing most of them. 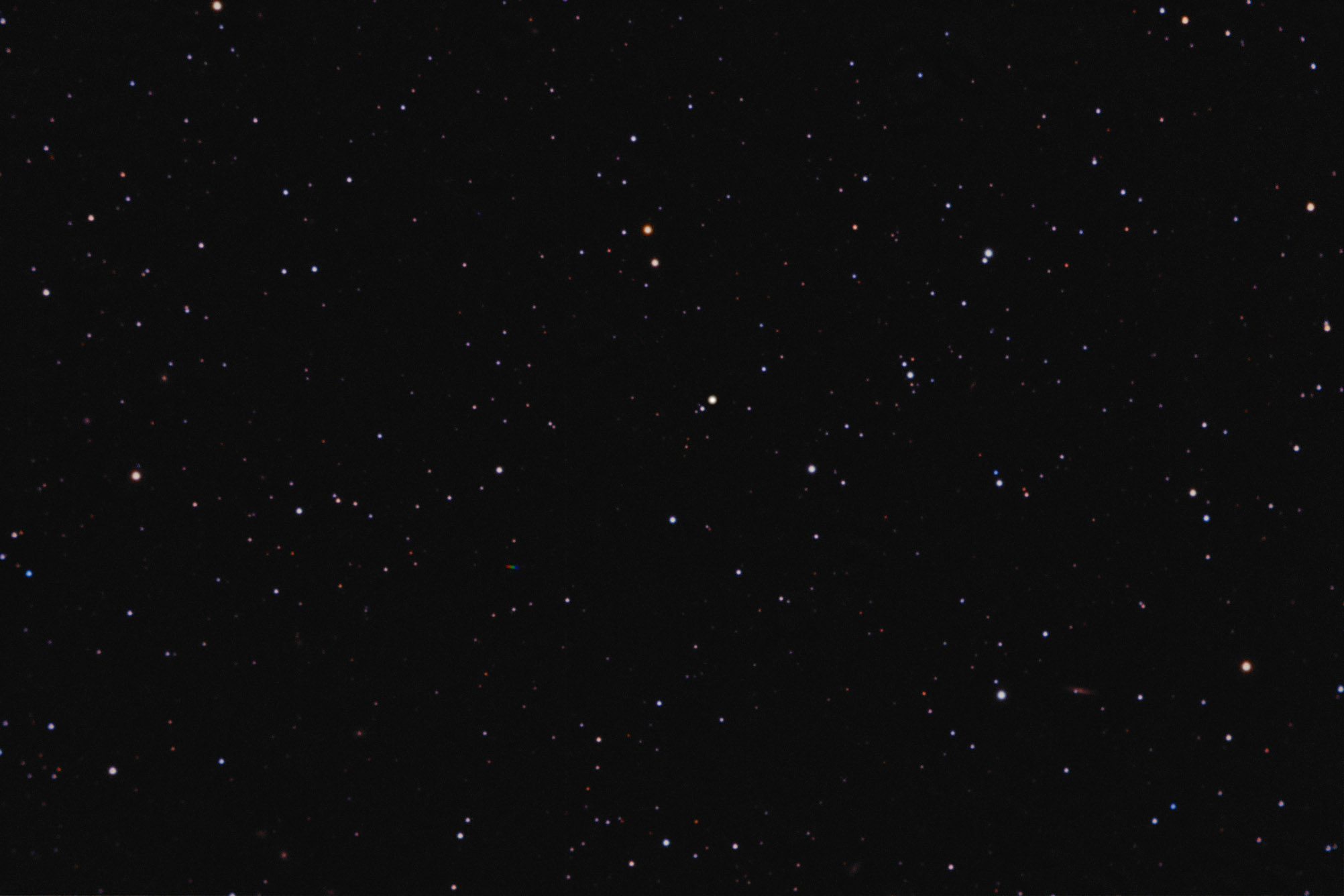 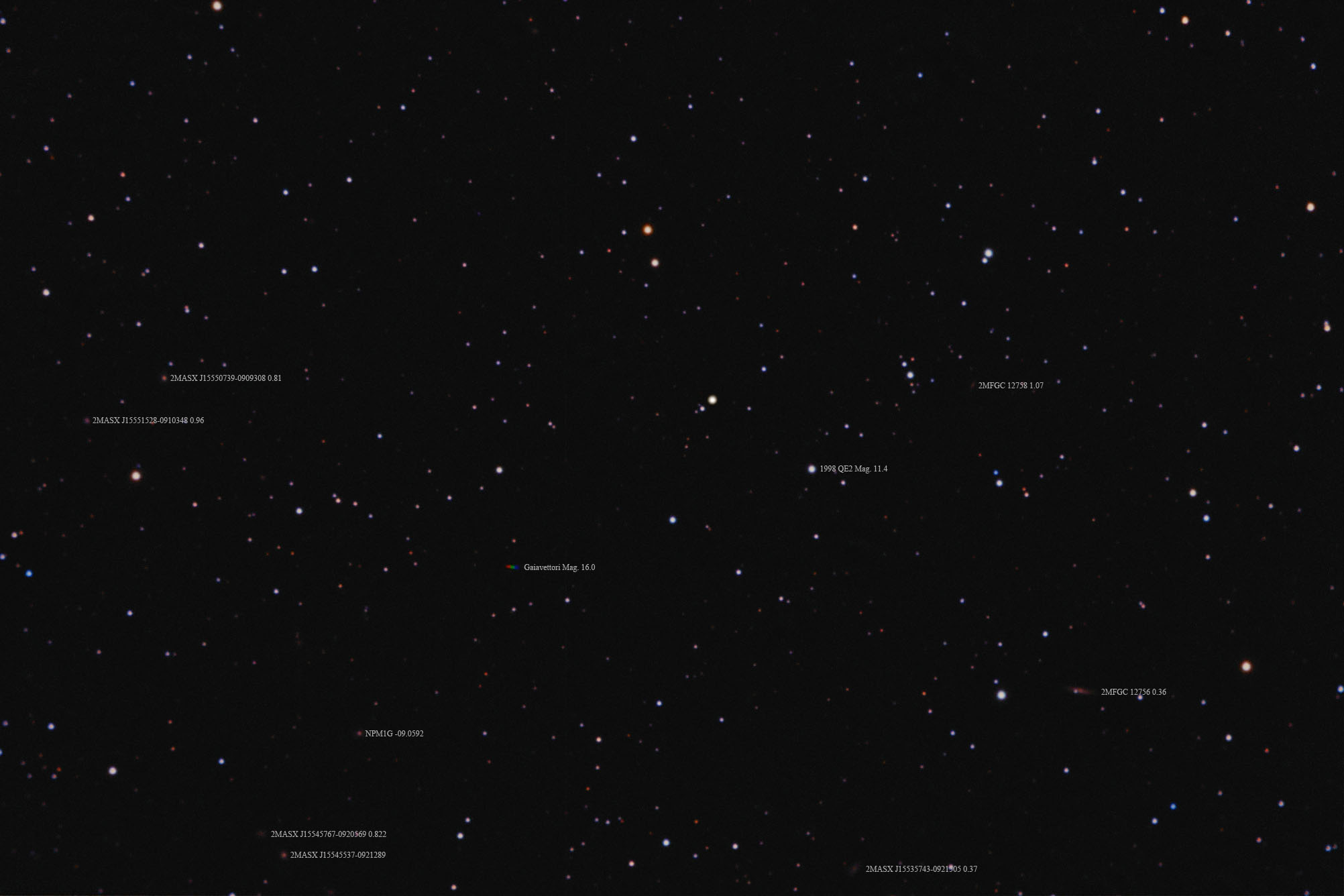