The Abell Galaxy Cluster is located in Orion, not a constellation you\'d look to for galaxy clusters. Some claim it looks like the constellation of Orion itself. I see three galaxies in a line much like the belt stars of Orion but they are vertical rather than nearly horizontal. To make the rest of the constellation I have to include stars as well as galaxies. Maybe you can see the similarity that I can\'t, but then I don\'t see Jesus in burnt toast either.

The cluster is possibly made up of two clusters, one about 350 to 400 million light-years distant and another from 410 to 460 million light-years away by redshift. It may be they are two groups at about the same distance but with different mean recessional velocities. Like with most galaxy clusters most members are elliptical or S0 galaxies, likely due to chowing down on smaller members in the past. NED lists the cluster as having a diameter of nearly 6 degrees. Obviously, I can\'t fit that in my 0.2 square degree field of view so I settled on just the core region. It is classed as BM III which means it has no central galaxy. But the center of the cluster does have UGC 3274 which is made up of 6 galaxies. The three brightest make up the vertical \"Belt\" I mentioned. I\'ve noted the UGG 3274 members under their LEDA or PGC designations on the annotated image as 6 galaxies with the same UGC number gets confusing and adding NED01 or NED03 etc. to the UGC number would not fit well in such tight quarters. One without redshift data is from the VV catalog, which lists them as VV161 plus a letter, is shown as VV161d as it had no LEDA or PGC designation that I found. Also while Abell said it has no central galaxy I see NED indicates that LEDA 075312 is the Bright Cluster Galaxy and it is the center of the three bright \"belt\" galaxies.

The portion of the cluster in my image has one entry from the Flat Galaxy Catalog at the top as well as three others from the 2 Micron Flag Galaxy Catalog. The latter has far less stringent requirements for entry in the catalog so they aren\'t as flat as FGC 0528.

Seeing wasn\'t up to what I\'d have liked but transparency was average which, is excellent for how the year was (and is) going. Fortunately, there\'s not a lot of detail to be seen in S0 and elliptical galaxies. 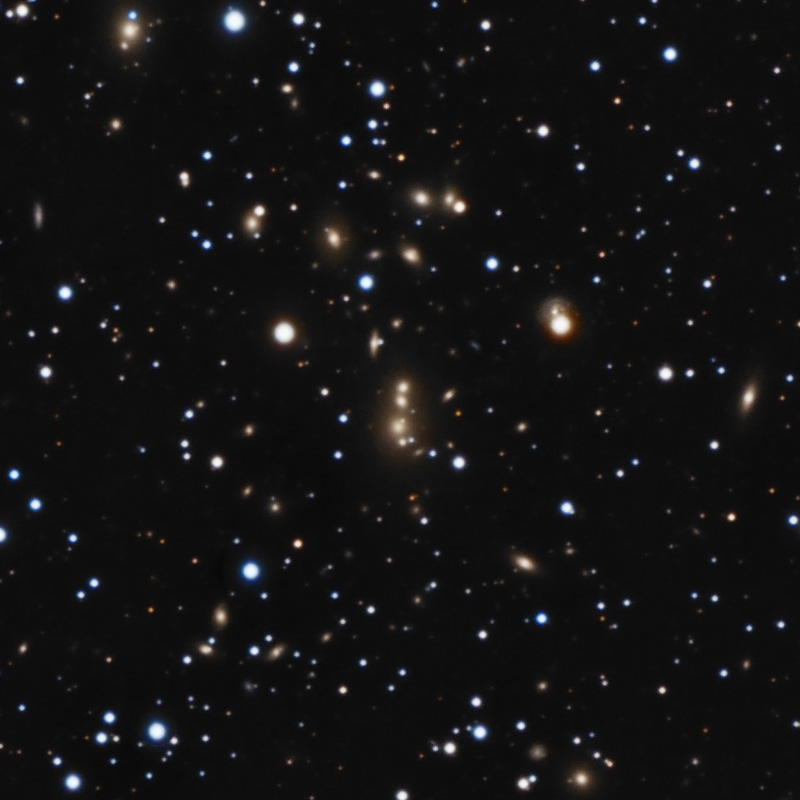 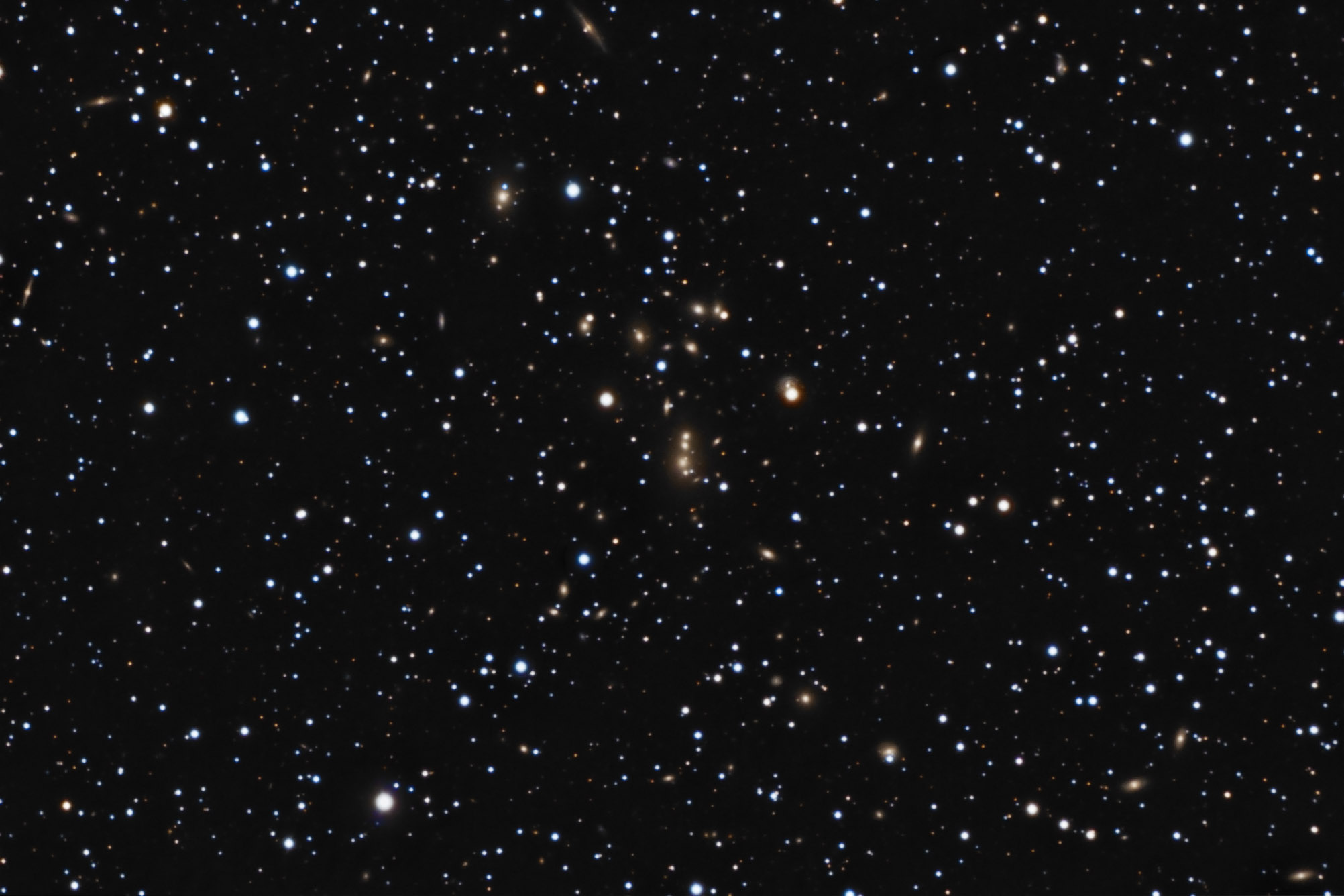 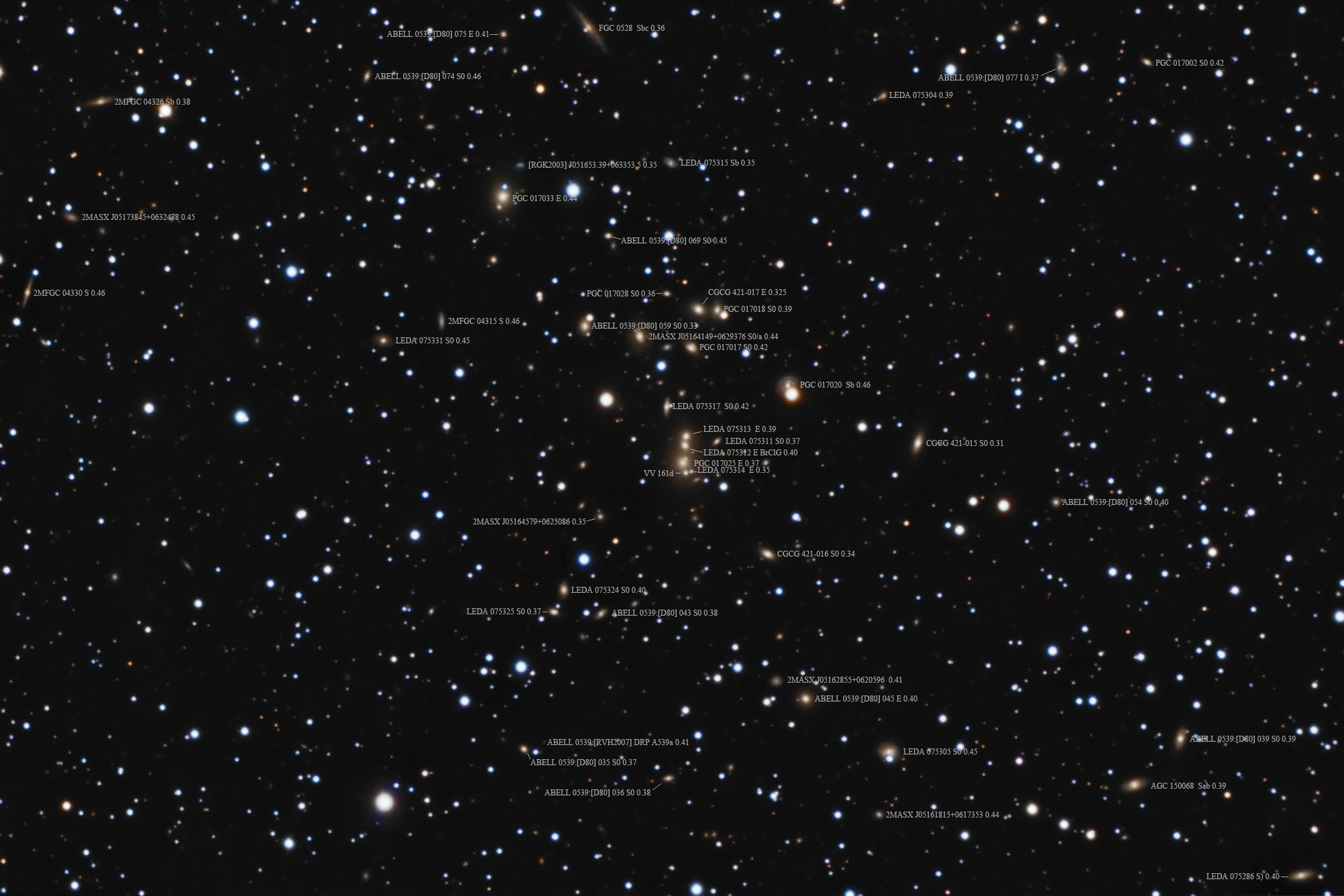