My target was And IV so I\'ll start there then go to what else I picked up unknowingly until I researched the image. And IV is a very interesting and difficult target by itself.

Andromeda IV is a something seen in the outskirts of M31. What that something is is still being debated. Originally it was thought to be a satellite of M31. If it is close to M31 and thus about 2.5 million light-years distant it is only about 1,000 light-years across its major axis. Darned small for even a dwarf galaxy. Since it is seen through the faint outer halo of M31 some said it was a star cloud in the galaxy. That at least would fit its small size as the NGC 206 star cloud is much larger than this object though all stars are too dim for me to see. This means it is a very old cloud without the massive blue stars of NGC 206. Yet its color is very blue. It\'s redshift while positive is very small, essentially worthless for determining its distance. Though if it was in M31 I\'d expect its redshift to be negative since the galaxy is heading for us or us to it or both. Many predict a collision in a few billion years. A single tip of the red branch measurement at NED puts it some 6.3 mega parsecs distant (20.5 million light-years). That would make it some 8,000 light-years across which is reasonable for a dwarf galaxy and would explain why I see no individual stars in a galaxy that is very blue indicating it has massive, bright stars. A note at NED also agrees saying it is likely 5 to 8 mega parsecs distant. That note indicates it along with three other galaxies form a filament of low-mass galaxies. http://www.aanda.org/articles/aa/pdf/2003/30/aa3819.pdf See page 828 near bottom of left column.

Since the above paper is the latest I find on this object and it fits what I see better than the other papers I\'ll go with it for now and move on to the \"impossible\" objects I picked up.

I prepared an annotated image. One thing I didn\'t expect was that I managed to image what are labeled at NED as planetary nebulae in M31! If correct that is not something I ever expected to be able to image. They are marked with PN followed by their designation in the annotated image. Some are so faint they may not have survived the JPG losses of the annotated image though can be seen in the lower compressed full image once you know where to look. Unfortunately, I found so many obvious errors involving other objects in the image I\'m not all that confident they really are planetary nebulae. These errors involve objects NED labels as *Cl which stands for star cluster, both globular and open use this label. While some of the blue ones seen in the edge of the brighter edge of M31 are likely open clusters many of the others are obviously distant background galaxies rather than globular clusters. When it is quite obvious the *Cl label is wrong I put what I feel is correct, usually G for galaxy in parentheses. Globulars that are likely correctly labeled all come from the Bol catalog of globular clusters in M31. Rather than using *Cl, which I reserved for apparent open clusters, I just used the Bol number. Some Bol entries were actually labeled as galaxies and will carry the G label without parentheses. Others have no red shift but look to me to be galaxies. Those are labeled *Cl? without the (G). A couple of the brighter galaxies without redshift data are labeled with their catalog name.

This brings me to the last object. It is near the eastern (left) edge of the image and is marked with ???. It\'s not in NED at all and is the color of an object shining with some H alpha emission, that is pink in color. Some planetaries are this color but it is several seconds of arc across making it too big for a planetary in M31 (considering its brightness). It might be a planetary in our galaxy or it might be an emission nebula in M31 that just happens to be round or it is something else. For now. I have no idea what it is. I did try imaging it through my H alpha filter. It didn\'t enhance much but didn\'t dim it much either. Thus my guess, for now, is it is a distant galaxy reddened by dust and by a rather higher H alpha emission than is typical for such galaxies. I don\'t have an OIII filter which, if it is there would indicate a possible planetary nebula. I consider that unlikely, however.

HST image of And IV: http://upload.wikimedia.org/wikipedia/commons/0/0b/Andromeda_IV_Hubble_WikiSky.jpg 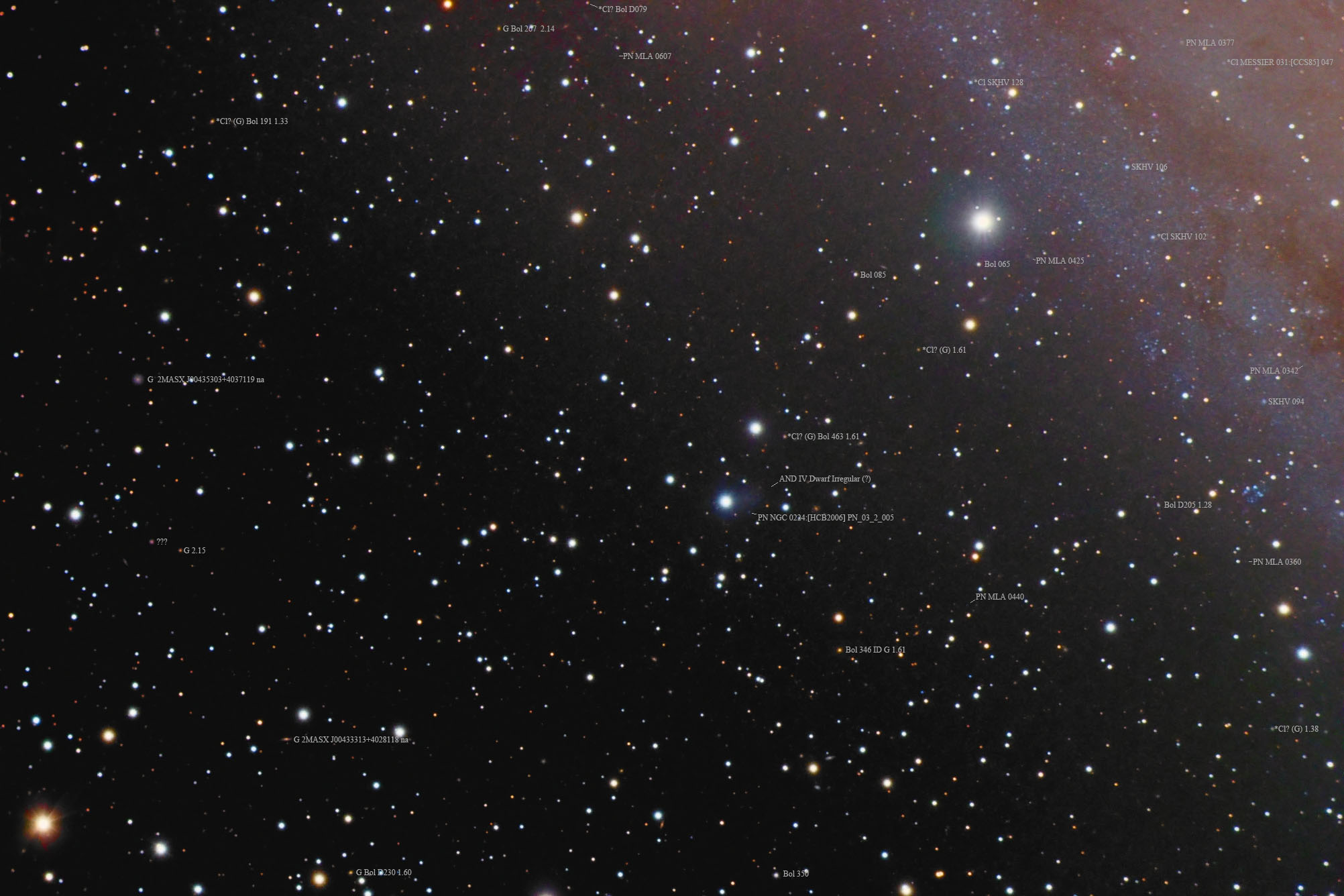 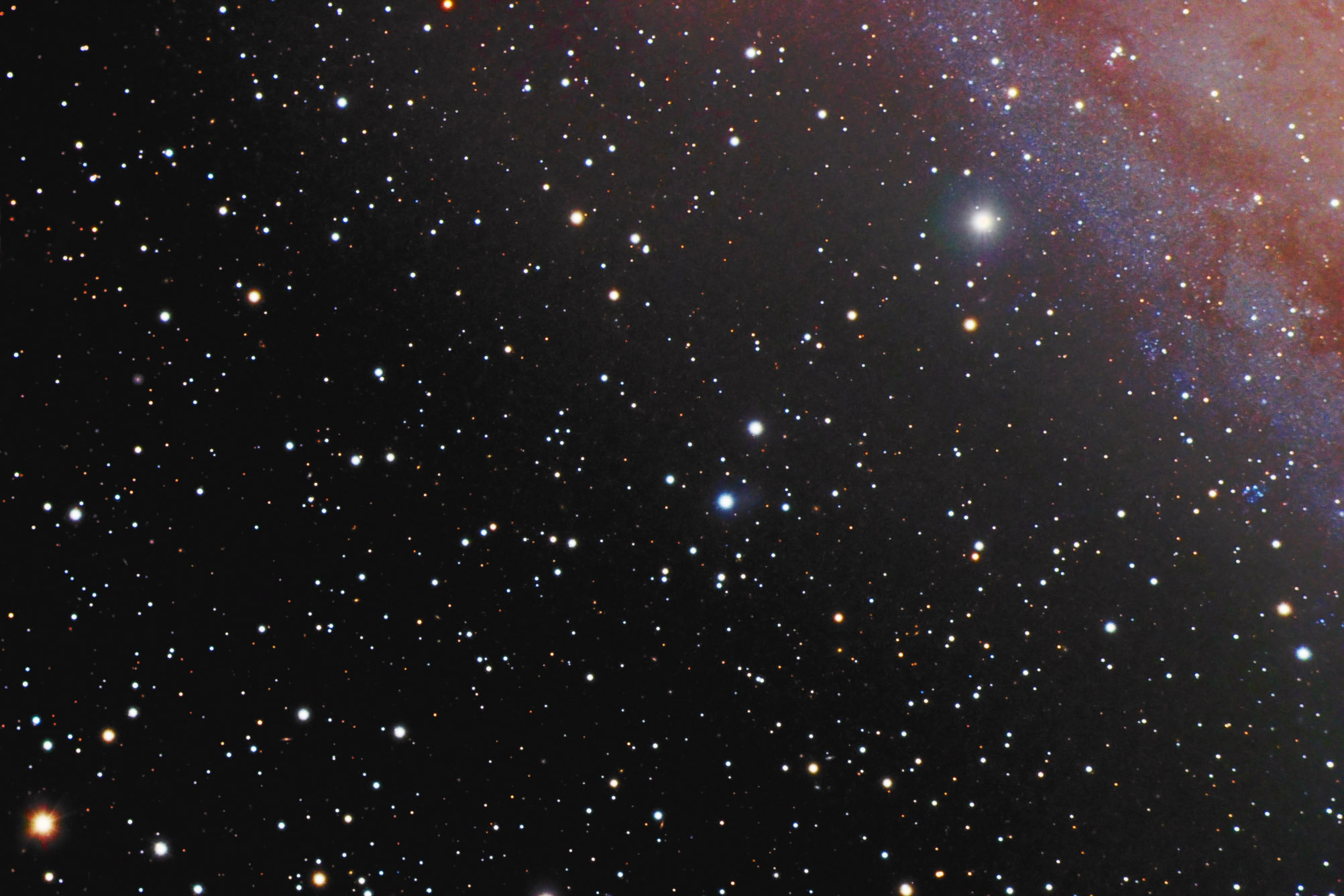