Barnard 13 is listed in SIMBAD as being 0.07x0.13 minutes in size which makes no sense and the position is east of the dark nebula complex normally associated with this dark nebula. Other catalogs give the same position but at least list its size as 11x4 minutes which does fit the complex, just not its position. And yes these are J2000 coordinates. It is described as: \"Irregular; irregularly darker inside with a rather sharp, short, narrow extension toward the S.\" It is listed with an opacity of 4 on a 1-6 scale with 6 being most opaque. Various pieces of it carry separate designations which I\'ve listed on the annotated image.

I was intrigued by a rather colorless smudge near the center of the image. NED points to a position just east of the smudge and calls it 2MASX J04293754+5452234 with a position error circle of 1.25\" radius. That just about reaches the east end of the smudge. SIMBAD lists a galaxy about 6 seconds of arc northeast of the position NED gives and calls it LEDA 2798557. It also gives it the catalog entry of ZOAG G150.98+04.36 which NED also gives it but their positions don\'t match. SIMBAD lists no error circle. To confuse things more when I ask The Sky to find it, it points to the faint star just east of Simbad\'s position. None give a magnitude for it. Nothing points to the smudge. But then NED and SIMBAD give its size as 0.09x0.08 minutes which is virtually round and best fits the starlike object that The Sky pointed to well east of the smudge. But its size is 3.4\" on my image which was about my seeing for the night -- lousy. That is 0.057 minutes, smaller than NED or SIMBAD say. I\'m thoroughly \"Lost In Space\" over this one. Maybe the smudge is just a bright piece of the obscuring nebula. If so I find no listing for it.

I had tried to find the one paper SIMBAD listed for it but that returned a paper on bees! I recently did track down the paper and find the ZOAG designation was the original discovery. That catalog has an error of 0.25 minutes or 15\". That would reach the starlike object. Also, the paper says they used a microscope to separate stars from galaxies on the red POSS II plates indicating this is a starlike galaxy. So apparently The Sky is right and it is the starlike object leaving the smudge-like object that\'s still a mystery. Both show on the POSS plates so the smudge is real, just unidentified.

Conditions were very poor, especially for the color data. Red was especially bad. I tried on several nights but all were nearly equally bad. Red was especially nasty with stars sometimes bloating to 10\" of arc in some direction then settling back down again. While I used 2 frames of each color out of 8 taken they equal less than one frame on a good night. Seeing for the luminance wasn\'t much better. Seeing was running 3.5\" to 4\". So don\'t look very closely at the star shapes, they are all highly distorted. So much so even RegiStar that can normally align anything refused to bring these stars into alignment and just shut down trying to match every sub to the best one. Now that\'s bad. Yet somehow I managed to get something usable anyway. Just ignore all the color artifacts the super noisy data created. Due to these issues, I\'m reducing this one to 1.5\" per pixel. 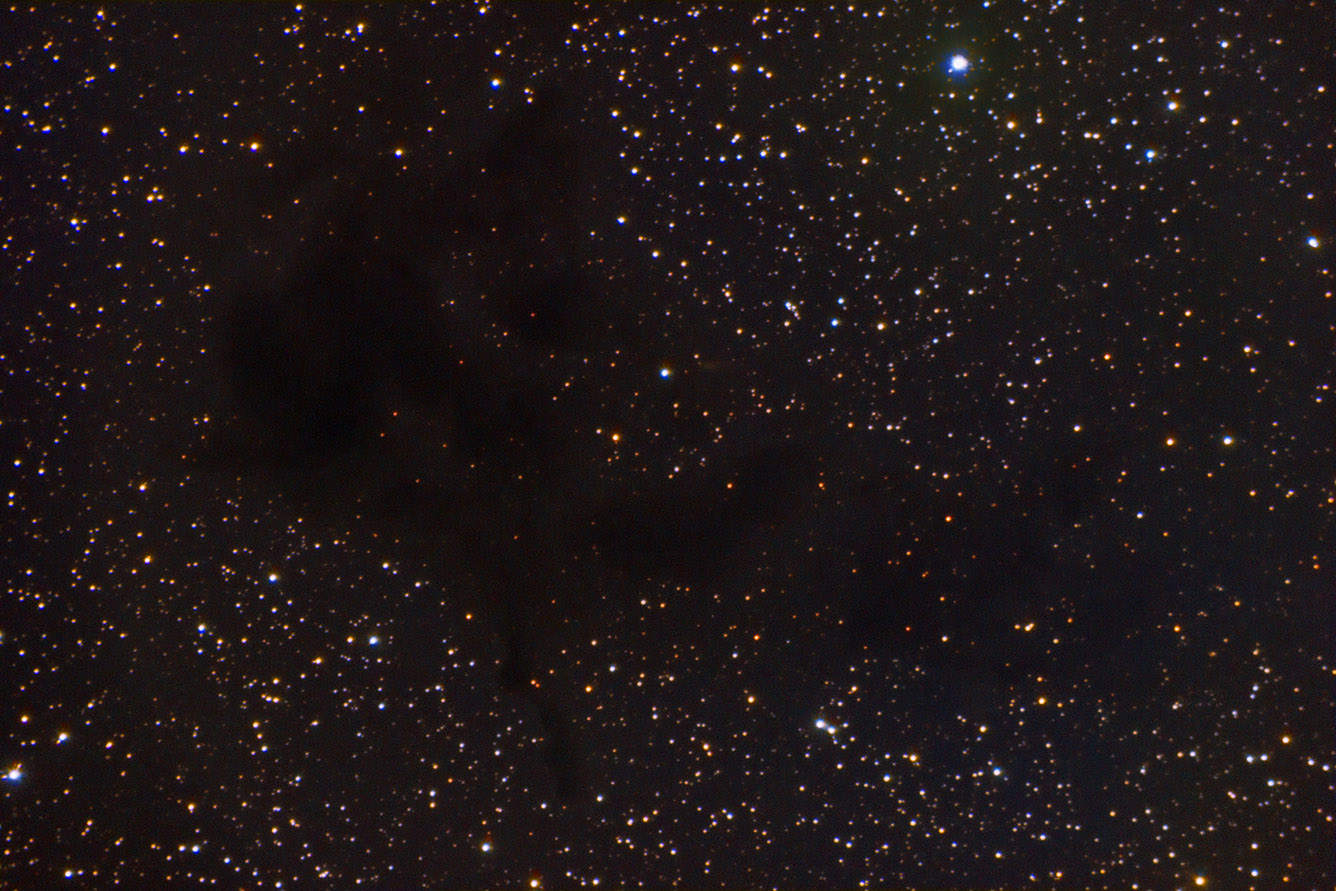 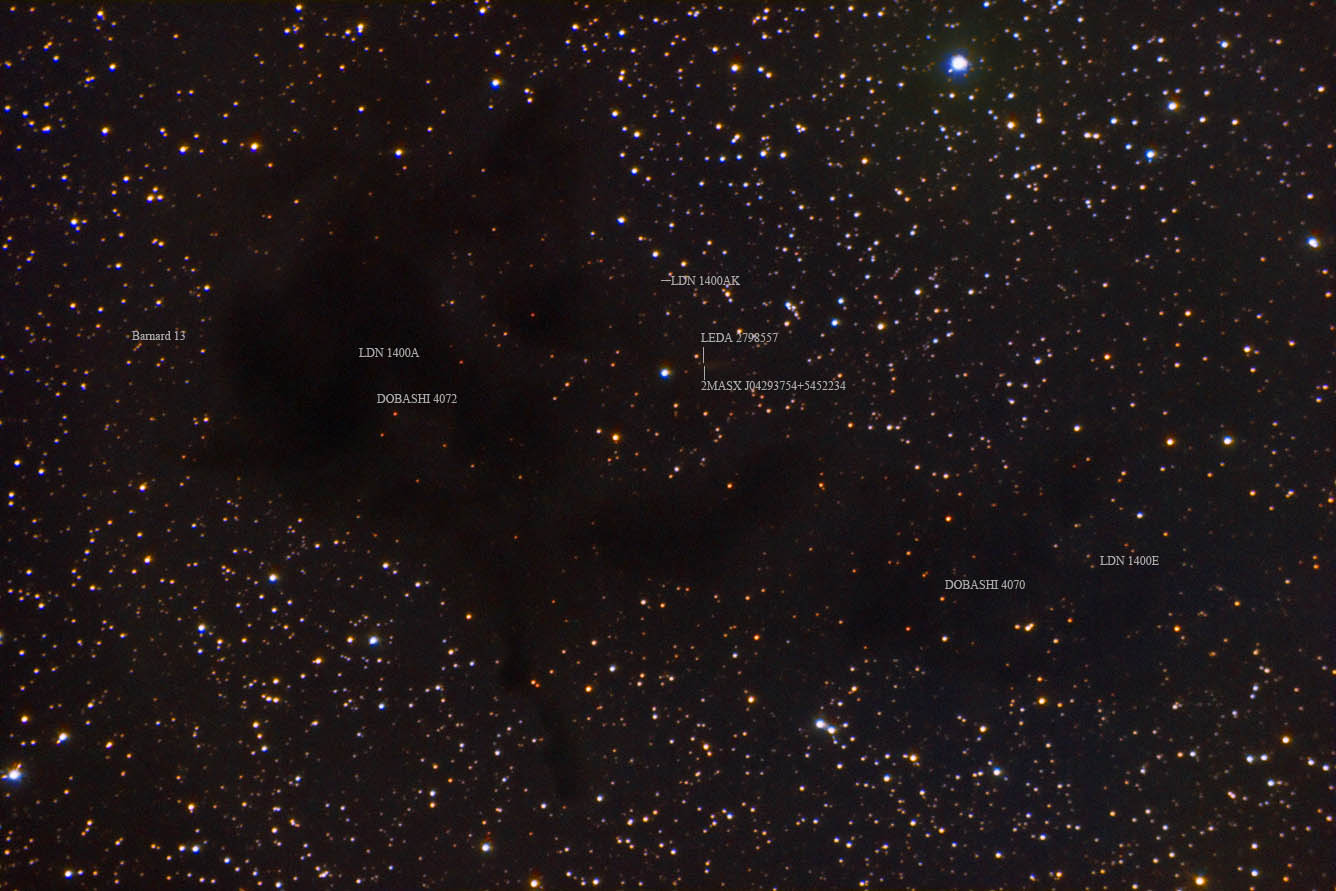