Barnard 139 is a very red dark nebula in Aquila. I couldn\'t find a reliable distance. One paper did assign it a distance of 600 parsecs but that was an \"Assumed value\" used for analyzing their data. That would translate into an \"assumed\" 2,000 light-years.

While I didn\'t realize it at the time I also caught the planetary nebula NGC 6778/6785 near the bottom of the frame. It\'s a rather unusual looking planetary. That\'s because it is \"disrupted\". It has a binary central star (not seen in my image) that creates two collimated outflows that are thought to be the cause of the disruption. You can read all about it at http://arxiv.org/pdf/1201.2042v1.pdf . The distance to it is very uncertain as I found two papers saying it was between 1 and 3.7 or 1 and 4 kpc which would be 3,300 to 13,000 light-years.

I also caught the object known as IC 1298 which is listed as an open star cluster. But it consists of only 4 or 5 stars. Dreyer\'s description is very small cluster then it mentions NGC 6788 3 minutes east. SIMBAD returns \"Not found in database.\" I guess that means they consider it nonexistent. WEBDA doesn\'t have it in their database of open clusters either. I\'ve marked it anyway on the annotated image. It was discovered by Guillaume Bigourdan on July 30, 1889. At best it is likely just an asterism.

Several galaxies are seen through all the obstructing dust. I\'ve marked the two most obvious ones. No galaxies in the field are noted at NED or SIMBAD. They are obviously reddened due to scattering of their blue light by the obscuring dust. There\'s a third object I noticed that is not obviously reddened at the bottom center of the image. It is noted with a question mark. I don\'t know if it is a galaxy that escaped the reddening of the others due to a hole in the dust or is so blue the reddening only turned it white or it is something else like a planetary nebula. I\'m not fond of the galaxy idea as I see no hint of a core region seen in the other field galaxies. Neither NED nor SIMBAD show anything at its position which is about 19h 18m 00.5S -1d 36\' 45\". It\'s not in the published listings of planetary candidates. There\'s an unpublished list I have no access to nor did anyone I contacted about this. Right now the area is too near the sun for imaging. It will be late spring before it is high enough in my sky to try and get a higher resolution image of it. It is faintly but clearly seen in the POSS 1 and 2 images but not with enough resolution to tell much about it. I don\'t have an OIII filter. That might help tell if it is a planetary. That it is rather neutral in color bothers me. Galaxies should be red and most planetaries are either red or blue. Only some reflection nebulae are neutral and those are rare. Another possibility is it is just a tight grouping of faint unresolved stars. Lots of possibilities but no answers as yet. If anyone knows anything about what it is please let me know. 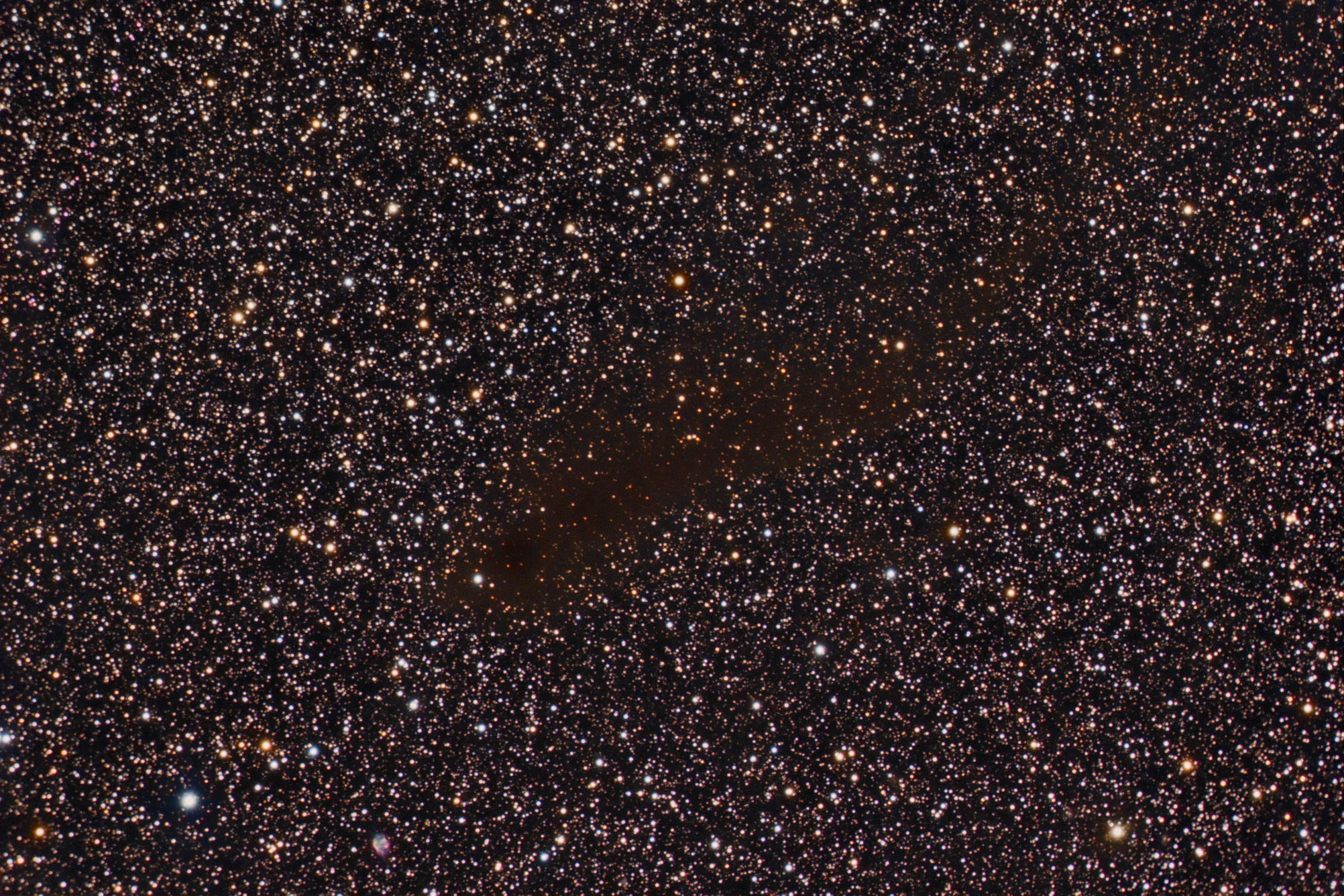 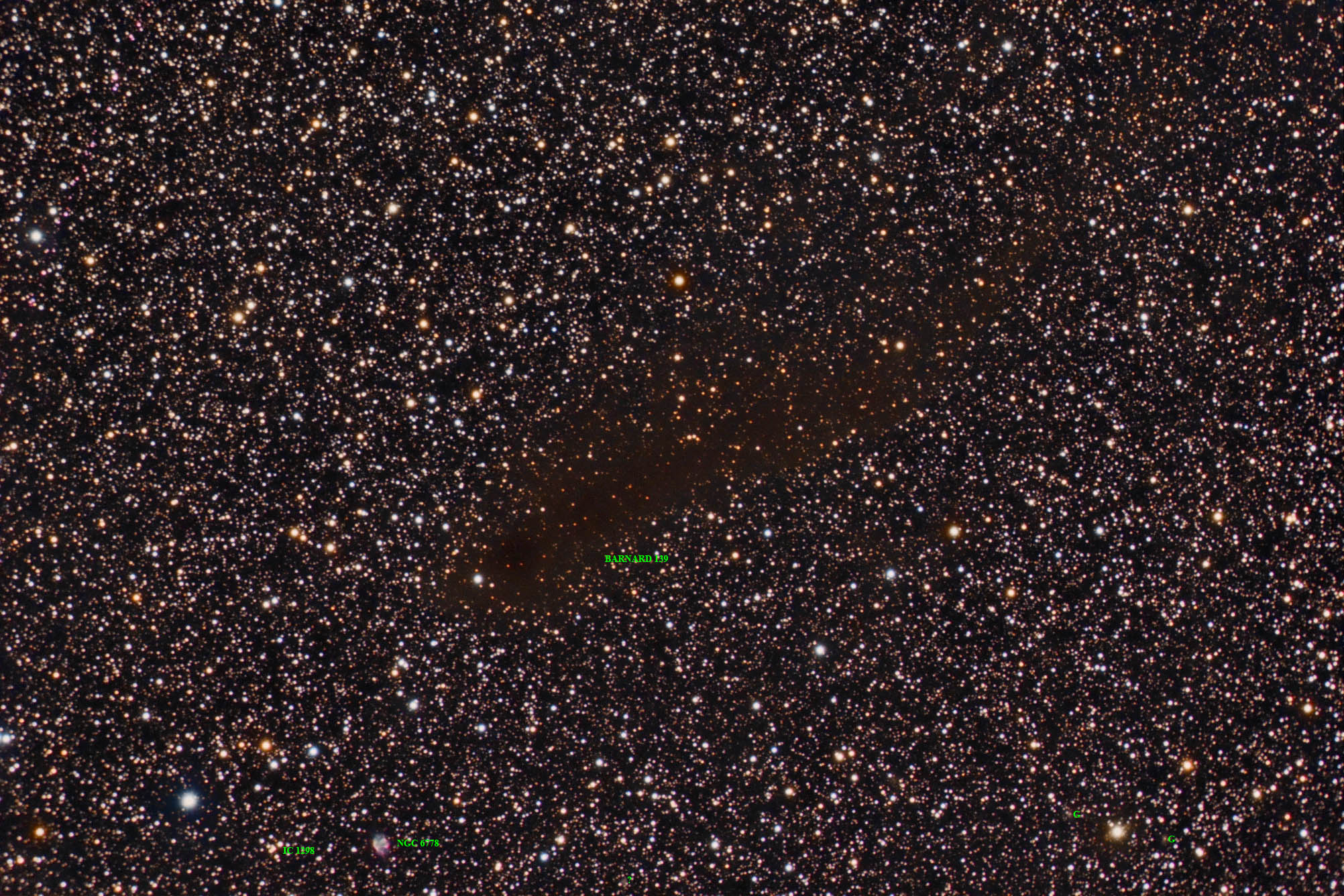