Barnard 163 is one of many dark nebulae in IC 1396, home of the far more famous \"Elephant Trunk\". IC 1396 is a huge emission nebula in Cepheus. Barnard 163 is a full degree from the center of the nebula and the \"Elephant Trunk\", both of which are to the northwest. 2 degrees north is Mu Cephei the \"Garnet Star\". So this is a rich area. It is thought to be about 3000 light-years distant. For beginners, I should mention the B stands for Barnard. Edward Emerson Barnard was a famous astronomer of the late 19th and early 20th century with lots of discoveries credited to him. He compiled an atlas of dark nebulae of which this is entry 163. http://www.dvaa.org/AData/Barnard.html He pioneered scientific imaging of the sky helping to bring an end to the era of visual astronomy. While others had taken images of a few bright objects he took the art to a much higher level. He also has a nearby dwarf galaxy and a star named after him. He was the sole discoverer of 14 comets and co-discoverer of 2 more. He died in 1923 at the age of 65 from complications of diabetes which had dogged him the latter part of his life.

To me Barnard 163 looks like a goose coming in for a landing. Even the neck is goose-like. I saw several references to it looking like a duck but what duck has such a long neck? \"Wings\" do look more duck-like however. Barnard was more serious in his description: \"Small; very black; pointed to the S; two dark streams running from this to the N.\"

Also in my image (lower right corner) is the cometary globule (another elephant trunk type object) GN 21.39.9 which houses a very tiny red spot known as HH 588 which in turn is due to the young stellar object 2MASS J21402898+5635556. This is a protostar condensing out of the cometary globule that has not yet lit its hydrogen fusion core. I\'ve marked a few other HH objects in the area, all carrying the HH 588 name plus additional descriptive characters so as to have a unique designation. All are likely the result of protostars hidden behind obscuring dust. The annotated image shows a few of the brighter ones as well as other named features. Two dark nebulae weren\'t in SIMBAD. They are marked by a question mark. In researching this field I found some with very wrong labels for these objects. I identified these using SIMBAD and plate solving to find the exact locations so am sure of my designations. I even copied and pasted them rather than risk a typo.

I am constantly asked how I come up with the objects I image. In most cases my to-do list was done so long ago I have no idea but sometimes I make a note. In this case, it was an APOD image, http://apod.nasa.gov/apod/ap110501.html . I even framed my image the same. Considering the APOD is credited to several major observatories I think my image is quite comparable. To see the entire cloud click on the next to last link in the APOD article http://apod.nasa.gov/apod/ap050908.html then click on the image to see it oriented the same as mine, north at the top. It shows Mu Cephei in the very top of the nebula and Barnard 163 at the bottom. The real elephant trunk is seen to the right of center.

Due to weather issues, this was taken over many nights in August. Conditions varied greatly making assembling this image \"interesting\" to say the least. My not using H alpha data added to the issues - I wanted to see if it was even possible without it and it was. 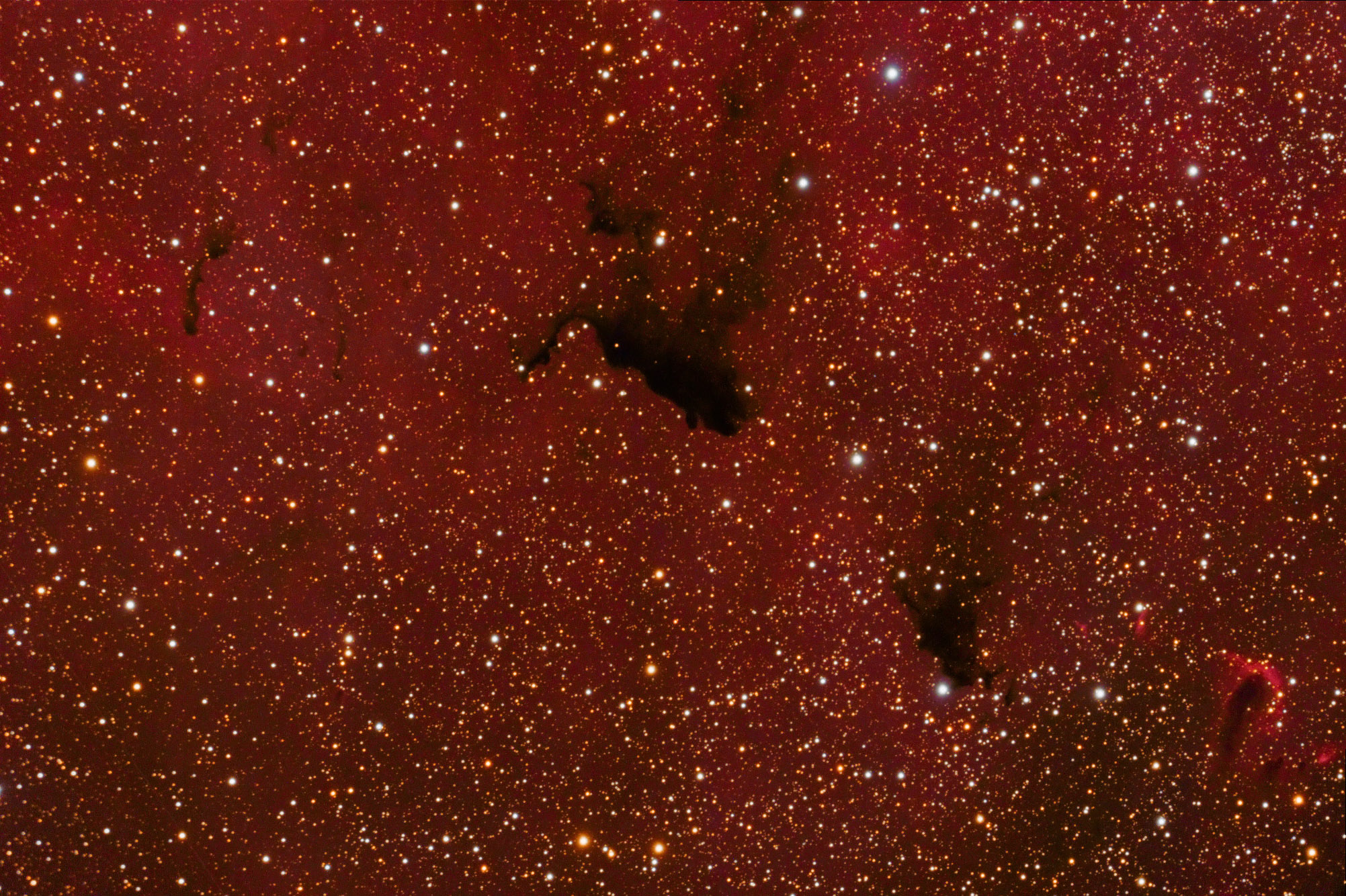