While at first glance the image may appear to be taken someplace in our Milky Way it is actually in another Milky Way. The lack of resolution of background stars should have given this away. The image is looking deep into M31, the Andromeda Galaxy. We\'ll be getting a real close up look at it in a few billion years when we collide and probably merge with it.

The cluster I centered on is often seen in shots of the galaxy as a tiny star, sometimes the HII shows it as pink to the west of M32. Even the full image is too narrow angle to show the edges of the galaxy.

I\'d picked up a few stars in the cluster in a previous image taken about 5 years ago. Ever since I\'ve tried unsuccessfully to resolve it until this short lived super night of August 29, 2008 UTC. Oh yes, it\'s named. It has several. In the \"Atlas of the Andromeda Galaxy\" it is cluster C179. For those who\'ve never heard of the Hodge atlas, it is online at http://nedwww.ipac.caltech.edu/level5/ANDROMEDA_Atlas/Hodge_contents.html

C179 is one of the largest star clusters in an HII region in the galaxy. I especially liked the arc of blue stars above it. Is there some reason for this arc? Wish I knew. Was it created by radiation pressure from the core stars? Just a random pattern? I have no idea. That\'s what it attracts me. NED lists two catalog names for it MESSIER 031:[BA64] 289 and MESSIER 031:[PAV78] 258. Though these refer to the HII region rather than the cluster. The Atlas mentioned above doesn\'t have a section for HII regions so apparently, we need both to fully cover it. Both are part of the stellar association the atlas calls A22.

I\'ve prepared a partial annotated image using the designations in the atlas and NED when the atlas didn\'t include the object. C is a cluster, G a globular cluster and A a stellar association. D is for dark nebula but I didn\'t include any of these in the annotated image. Since stellar associations are hard to identify I\'ve not labeled many of them either. Both are rather vaguely defined so best seen using the atlas. C179 is on Chart 5 http://nedwww.ipac.caltech.edu/level5/ANDROMEDA_Atlas/Chart5.html. The image does extend into 3 as well. You can spend a day identifying all the features. The charts were rather small on my monitor and I had to blow them up to see them clearly. While most fuzzy blobs are identified on the atlas as globular and open clusters I\'ve found several that aren\'t identified by either the Atlas or NED. I put a question mark beside them. Not all globulars and open clusters are in the atlas, some I only found in NED. Those carry the NED designation. BOL stands for Bologna Globular Clusters. Why some aren\'t on the atlas I don\'t know, later data? MLA0469 is an HII region as is [PAV78]274 near it. Only the former is pink. The latter is associated with an open cluster which dominates my color data.

Just like it is easy to get lost in the Milky Way you can get lost in M31 when the image scale is large enough. Having the needed seeing once in 5 years really makes me envious of those few imaging remotely from mountaintops where such seeing is routine. Seeing pinpoint stars at 0.5\" is a fantastic sight to this image. I just wish the color data were up to that quality.

Using NED I was also able to find a handful of very faint planetary nebula. All but one were close to the noise level making ID a bit uncertain so I\'ve not listed but two of them, one quite bright on the left edge of the image. Think how bright it must be to be so easily seen over more than 2.5 million light years. Even C179 and its HII region must be a grand sight for those living within a few thousand light-years of it in the galaxy. 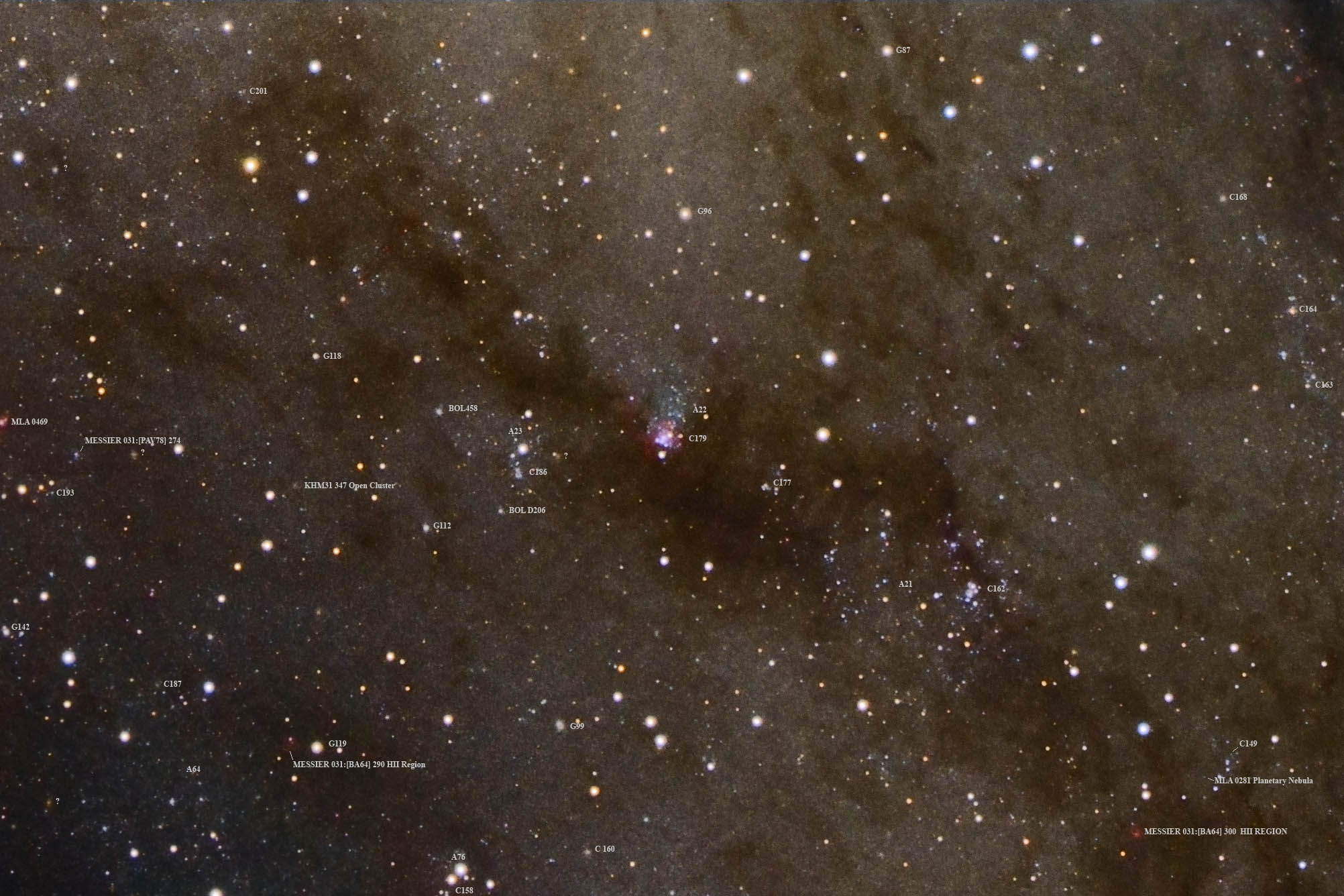 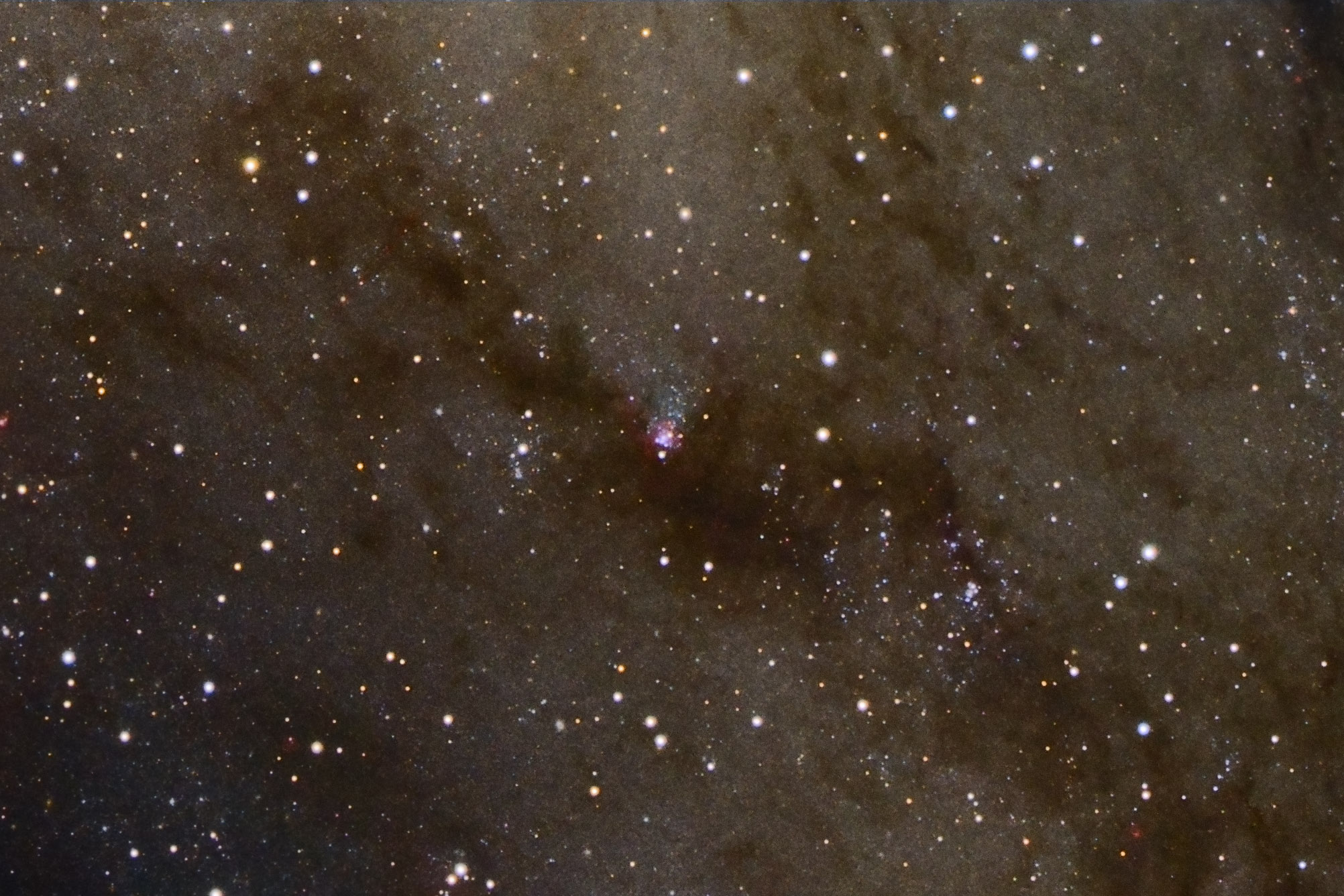