This Smiley Face or Happy Face is the result of gravitational lensing of distant galaxies beyond the lensing galaxies. NED gives it the name Cheshire Cat if you are looking it up. An alternate name is Cassowary 02L1. A bird and its hunter. Though I suspect most house cats would end up very dead if they took on a Cassowary. When I was in Australia we were cautioned not to get near one as they were \"The most dangerous bird in the world\" or something like that. True or not we stayed very clear of the two we saw. They are quite rare so seeing one isn\'t common. Habitat loss is the problem.

Back to astronomy. NED puts it about 4.5 billion light-years away with a redshift of 0.426. Is that the distance to the lensing galaxies or the lensed galaxies? I think that is the distance to the lensing galaxies. NED has an entry centered on part of the blue arc, CASSOWARY 02G with a distance of 7.65 billion light-years with a redshift of 0.966. NED points two other at 11.37 billion light-years. So the cat is made up of many unrelated galaxies that have the proper geometry when seen from earth to make a smiling face. It is the lens that brightens these very distant galaxies sufficiently that I can see them. I doubt any would be visible in my 14\" scope without the foreground lensing galaxies. The CASSOWARY name is an acronym for CAmbridge Sloan Survey Of Wide ARcs in the skY. Someone had to really stretch for that one! Anyone know why the Australian tie?

Using the diameters of the two \"eyes\" at NED and a distance of 4.5 billion light-years I get a size for these two galaxies of about 110,000 to 120,000 light-years. Not as big as I expected for how bright they are. Their brightness isn\'t enhanced by the gravitational lens they create for the background galaxies. NED says they are magnitude 20.2 and 20.5 left to right. Normally I find galaxies at this distance to be at least a magnitude dimmer, often 2 magnitudes fainter. Though ASK 186534.0 is magnitude 18.3, 2.18 billion light-years distant and 145,000 light-years across making the two lensing galaxies somewhat smaller and dimmer by comparison.

I\'ve had this one on my to-do list since February 2015 when it was first announced. The complex passes less than 2 degrees of my zenith so I expected it easy to get good enough seeing for long enough that I could catch it. I figured on a minimum of 2 hours of luminance, three times my typical exposure time. But seeing has never cooperated. Finally this March the night met my specifications and I started in with near 0.5\" resolution for one frame. After 4 (each 10 minutes) seeing had deteriorated so much I had to stop. Since color data can survive such seeing I started in on that and got one round of 2 frames each before seeing then said no way and besides clouds moved in. I had to throw out one green frame as it was too cloud hit to be used. I had several more clear nights but seeing just wasn\'t good enough. Ditto for April. Now it is too far west and low for the seeing I need for this super tough object. Even though I had no more data than I use for most of my imaging I went ahead and processed it. The better than normal transparency for the first 3 frames allowed me to get something, just not what I wanted. It doesn\'t compare to Josh Smith\'s fantastic image using over 32 hours of luminance. https://www.astrobin.com/286097/0/ Adjusting for aperture that\'s 5 hours at 14 inches or 7.5 times the photons I was able to grab. Josh send me your seeing and clear skies. I was surprised I got as much as I did though the resolution was poor due to the low signal to noise ratio and deteriorating seeing. After I picked up the smile and the arc on the west I noticed the eastern side of the arc was missing. But it is pretty well lost in Josh\'s image as well. If I get needed skys next year I\'ll try and add more photons. In the meantime Josh\'s image is a good example that small aperture can do as well as larger if you put in the additional time to catch enough photons.

Since the image didn\'t do what I wanted I did annotate everything with redshift data at NED. Also, here\'s the link to the Hubble version https://www.nasa.gov/content/hubble-sees-a-smiling-lens . It\'s a bit better than mine but is it billions of dollars better? 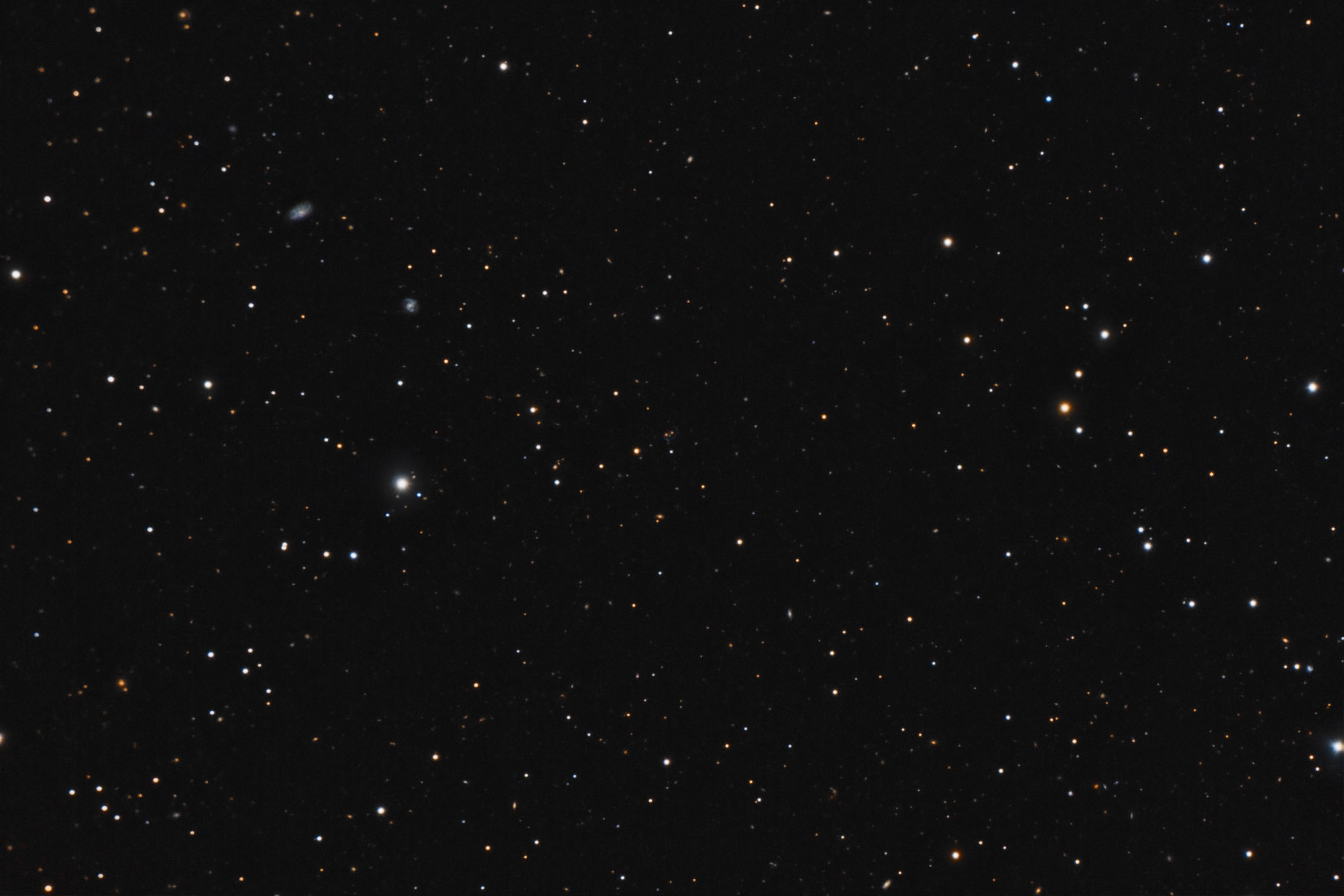 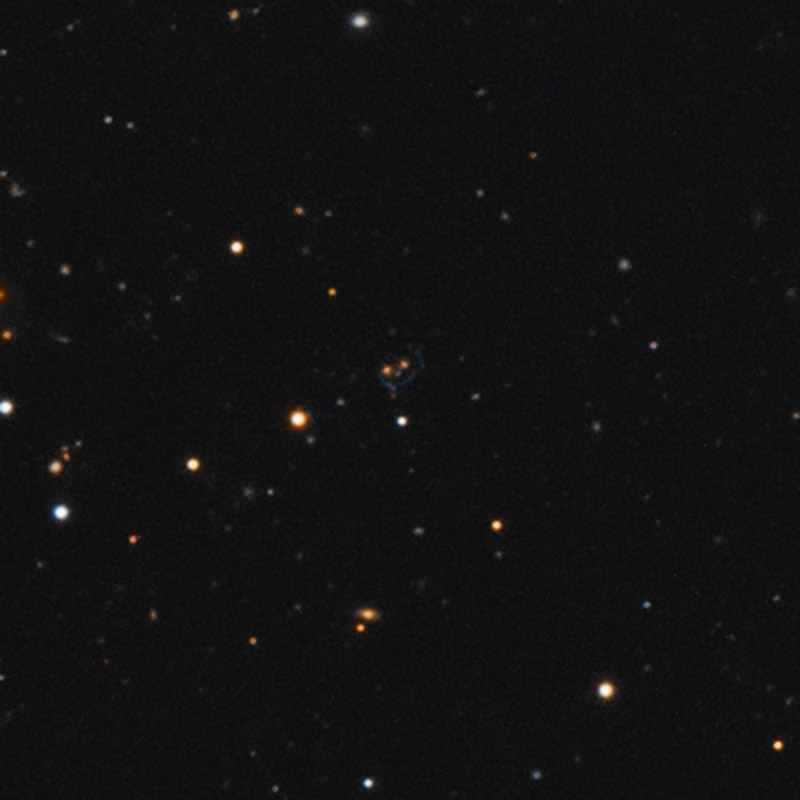 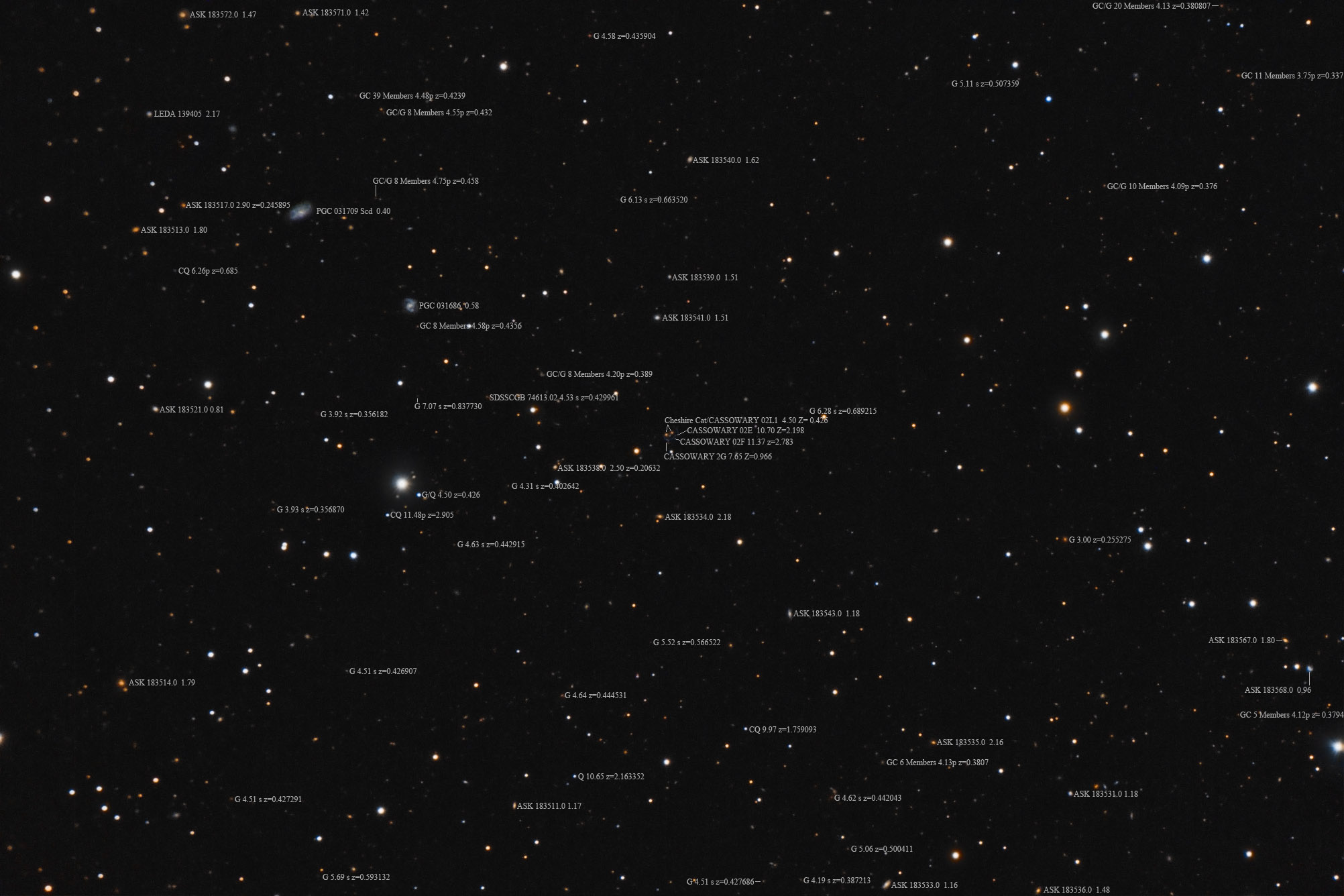