This is a retake of an image taken in the fall of 2011. Conditions were very poor then so I wanted to retry it. I took data over three nights in December 2012 but conditions stayed very poor. At -11 degrees this one isn\'t easy even on a good night. Seeing was much better though again sky brightness was very high due to haze and nasty airglow. Again the fainter details escaped me. But thanks to better seeing it is a noticeable improvement over the previous year. Most of the text below is from the original post which is at: http://www.spacebanter.com/attachment.php?attachmentid=4373&stc=1 .

DDO 005/PGC 2689 is a strange galaxy near the right edge of my image. A note at NED shows lots of confusion about this galaxy in the MCG catalog (it is MCG -02-03-009). It reads: \"Interacting? Perturbed SB? -- On the arm is a nucleus or a star, and also a compact E or star [16 mag] is found in it.\" The 16th magnitude object appears to be a star in my image judging by its PSF (Point Spread Function). The 18th magnitude object to the upper right, however, is not a star nor is the blue object below the 16th magnitude star. To me, both are star knots in a very disturbed looking galaxy. They are very common in such galaxies. I had expected it to be classed as an irregular galaxy but NED say it is a barred spiral classing it as SAB(s)m but of the Magellanic type (named for the Magellanic Clouds.) The DDO is the David Dunlop Observatory Catalogue of dwarf galaxies, most of which have low surface brightness.

The other main galaxy in this field is NGC 255 on the far left. Tully-Fisher measurements of the distances to these galaxies say both are about 65 million light-years away. Redshift measurements are in close agreement at 60 million light-years. Thus, while widely separated in my image, their projected separation is only about 500,000 light-years. It is quite possible they have interacted in the past. This could explain their appearance. NGC 255 is listed as SAB(rs)bc by NED and the NGC Project. It has a bright core region and widely spread very low surface brightness outer arms. It was discovered by William Herschel on November 27, 1785. It isn\'t in either H400 observing program.

This pair is located less than a half degree north of NGC 246, the Skull Nebula. So you\'ve likely had it in your field of view when looking at this rather famous planetary nebula at low power.

There\'s another pair of probably related galaxies in the image. The spiral MCG -02-03-013 at the top of my image and LEDA 966142, the disk galaxy well below it. They have a redshift light travel time distance of 750 and 710 million light-years respectively. I found no other estimates of their distances. While a 40 million light-year difference may seem big this may be more to do with their relative velocities than a true distance difference. Or they just happen to be line of sight.

An apparent galaxy cluster is seen to the upper left of NGC 255. NED lists the 2MASS galaxies in the area but gives no indication that this is a cataloged group nor are there any distance estimates for them. Unfortunately, this is a very poorly researched area of the sky.

As mentioned I didn\'t begin to get the data I wanted and after a month of trying I gave up on it. I had to throw out about 70% of the frames as they hurt more than they helped. Satellites were nasty as well. Some frames had up to 3. One of the two usable red frames had three. With so few frames and some going right through detail in galaxies I had a lot of work removing them since I had to preserve the detail in NGC 255 and DDO 005 meaning cloning was not an option. I had to do a manual version of a rejection stack in Photoshop with only 2 color frames to work with. Lots of \"fun\" for a not so hot image. 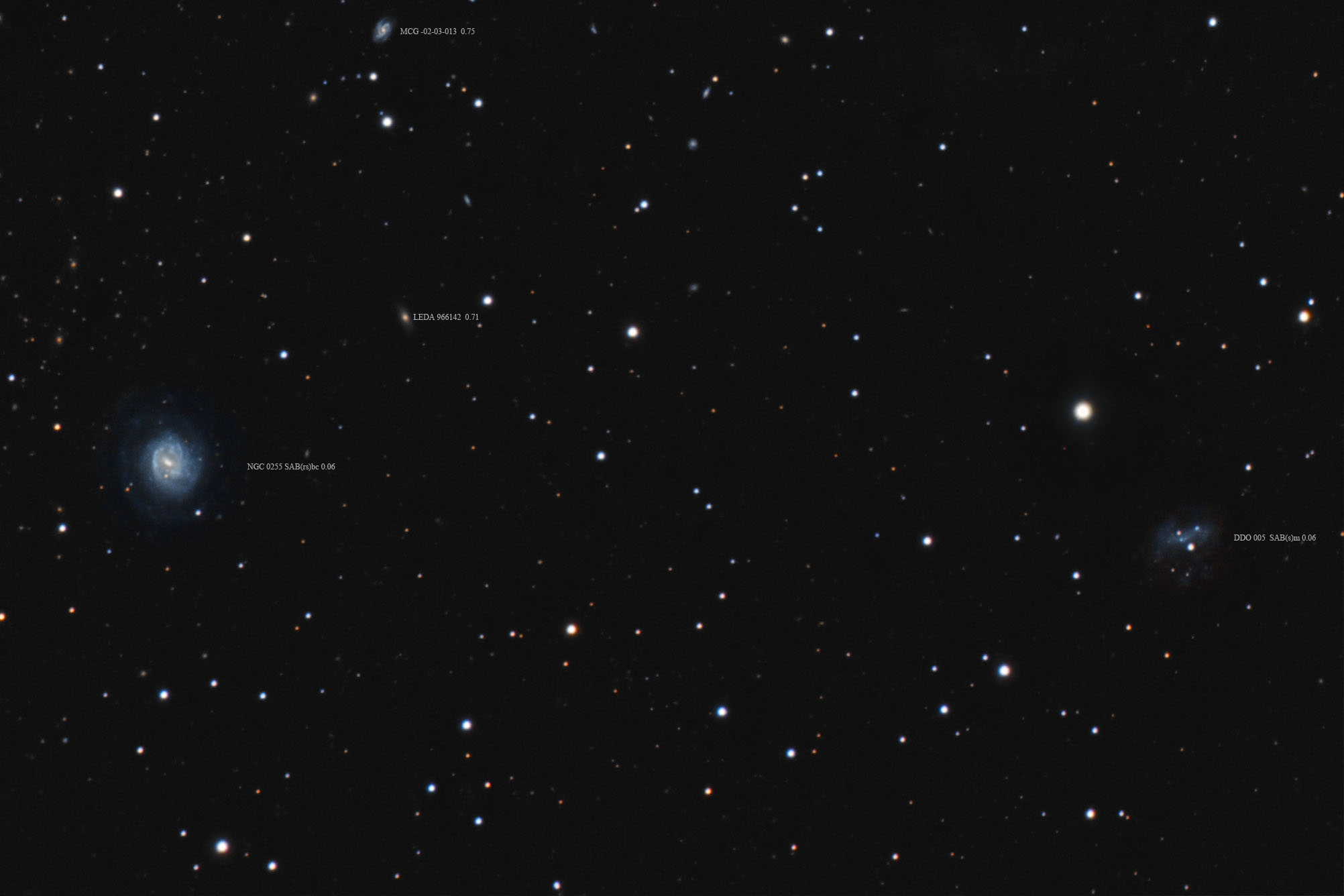 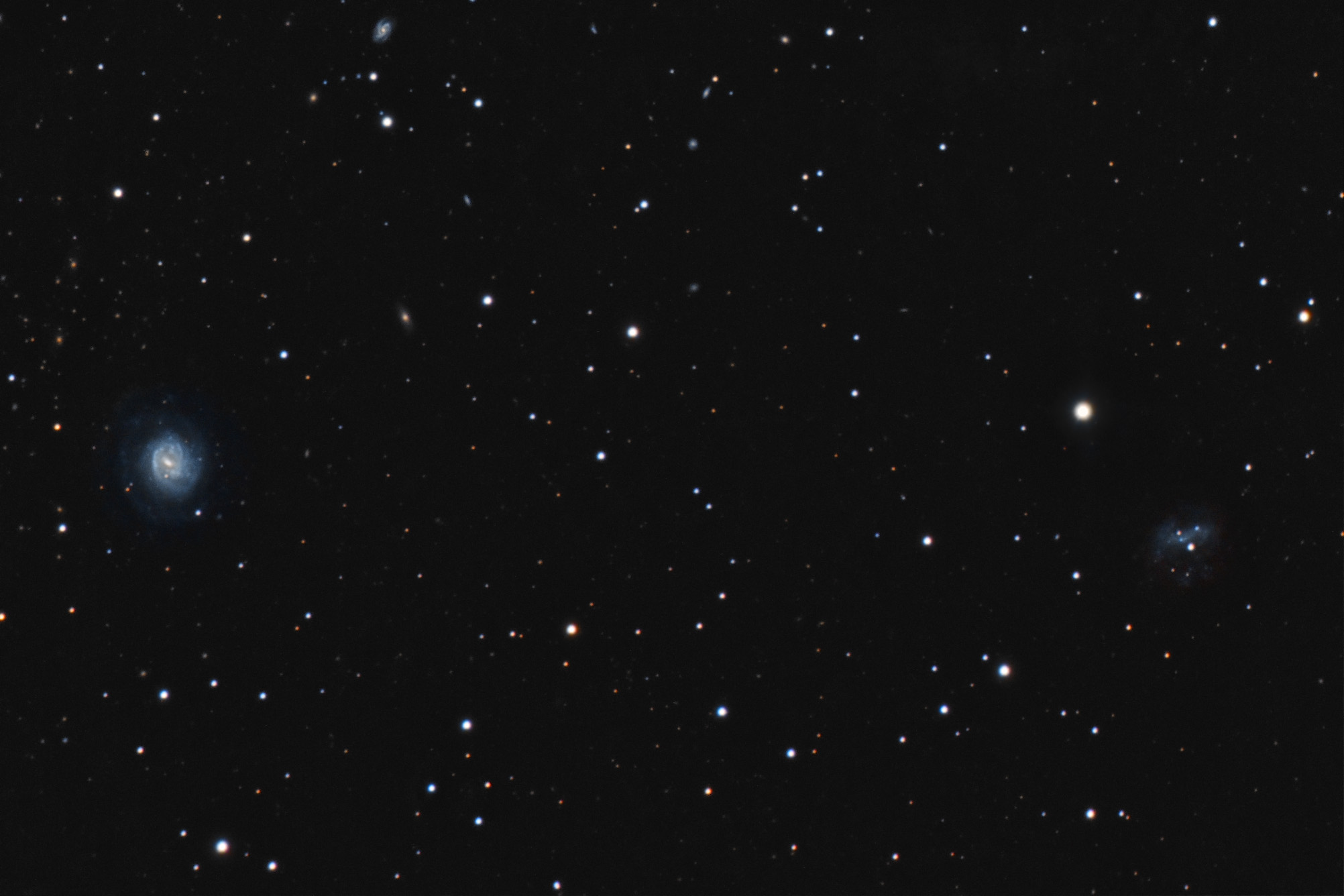