This image was an opportunity to catch two objects on my to-do list at the same time. In the upper right, we have the 3 galaxy group WBL 142 comprised of three NGC galaxies, NGC 2385, 2388 and 2389 all about 200 million light-years distant. Also in the image in the lower left is the flat galaxy FGC 633 also known as UGC 03879 among 13 other designations at NED. It has a pair of faint round galaxies off its northwest ansa but like many of the galaxies in the image aren\'t listed at NED. FGC 0633 has about the same redshift as the 3 NGC galaxies so is likely related. In fact, the group of 4 is known as HDCE 0444. The field is located in northern Gemini north-northwest of Castor.

All four of these galaxies are quite different. Two appear rather red with little new star formation going on. NGC 2389 is a nice barred spiral with many short arm segments built up of star clusters. While it obviously has lots of HII regions they may be below my resolution limit as none showed up. It was spotted by IRAS indicating strong IR emission. With its blue color, it isn\'t all that surprising it is found in a UV catalog as well. Blue stars are new and formed in dust clouds that emit lots of IR light due to being heated by the young hot stars they contain. So oddly, blue galaxies can be strong in infrared light as well as ultraviolet light. NGC 2388 is considered a luminous infrared galaxy and is listed has having HII emission. That would indicate it isn\'t as dead as its red color would indicate. LIRG galaxies usually have intense star formation going on, just hidden behind a curtain of dust glowing brightly in IR light from the heat of all the newly formed stars hidden behind the dust cloud. NGC 2385 is an edge-on galaxy with a large halo around it. It too is red but also listed in both an IR and UV catalog. It too has HII emission. So it too likely has star formation hidden from us by dust. FGC 0633 is so edge-on we can\'t say much about it other than it certainly is thin. But it too is listed in IR and UV catalogs so is apparently rather active. It might be quite interesting if we could see it face on. I wonder if it might not look something like NGC 2389. I do find its irregular nature rather odd. Probably due to a very irregular arm structure when seen face on. My wife describes it as kinky.

While the 9th data release of the Sloan Digital Sky Survey covers this field only a few of its galaxies have been entered into NED, none with redshift data. The data I used comes from older measurements. In fact, only these 4 galaxies have redshift data at NED. I wouldn\'t have made an annotated image with so few to annotate but the field also turned up 5 asteroids. All with very short trails. Then there are some galaxies not listed at NED that look exactly like the short asteroid trails in the image. I decided I needed to point out the real asteroids. See the annotated image for details.

There\'s what appears to be a \"sloshed\" galaxy south of NGC 2385 which I\'ve noted on the annotated image without redshift data. While the core appears located somewhat off center to the east side of the galaxy at first glance a closer look shows a faint arm making a complete, very faint loop to the northeast. If this is included the core is off-center to the west, exactly the opposite of my first impression. I needed more time to bring out this feature.

On the east side of the image is another galaxy that at first blush appears \"sloshed\" but in this case, the bright core is really a field star in our galaxy and the real galaxy core is where it belongs in the center of the galaxy. Though its two arms are very unsymmetrical with the eastern one drawn out giving the galaxy a somewhat oval appearance. 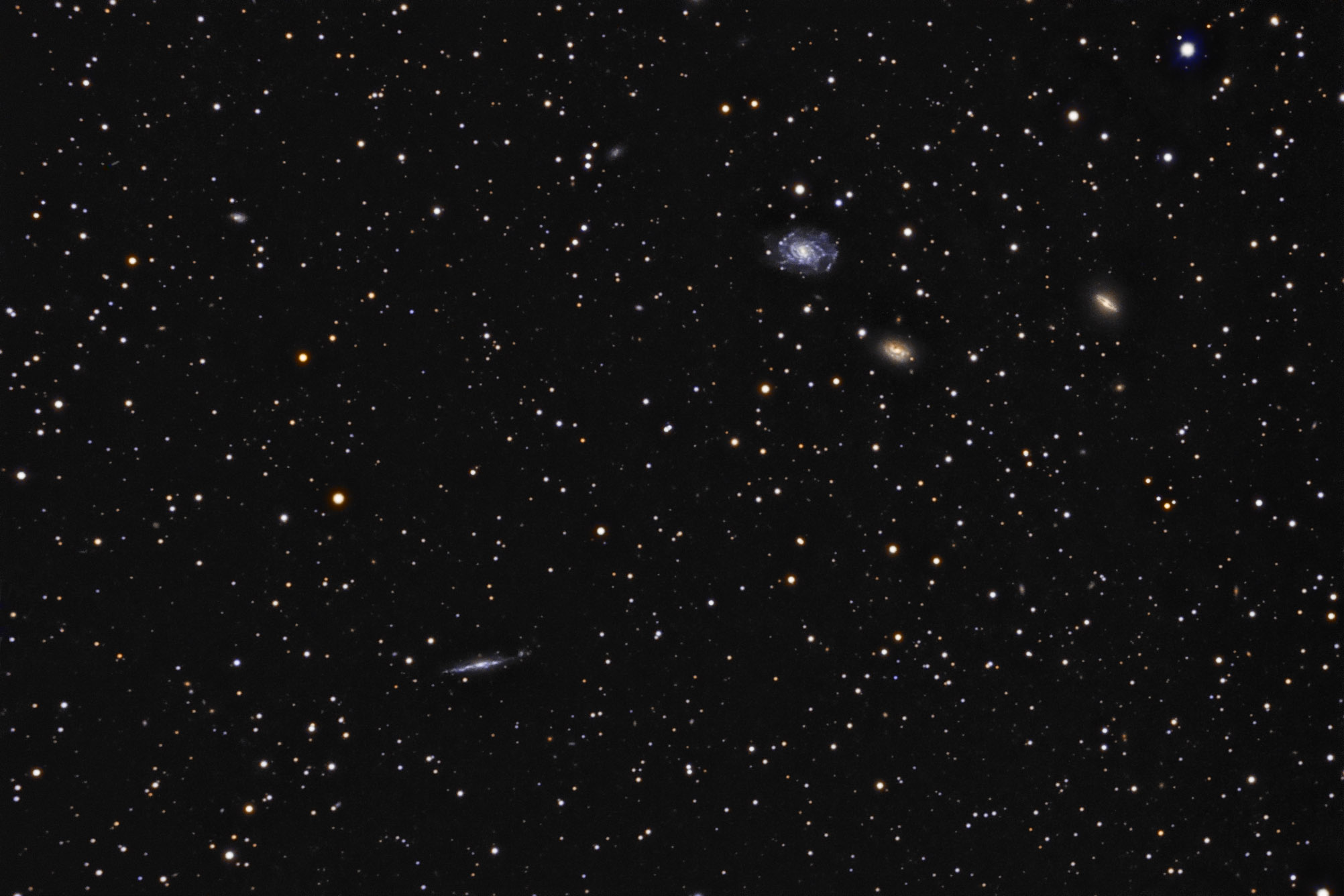 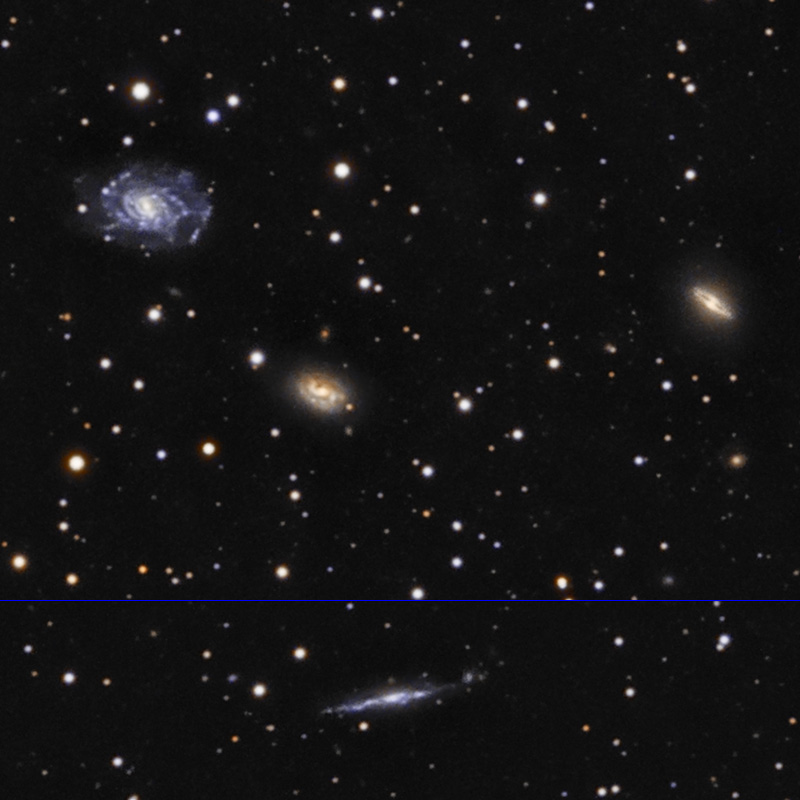 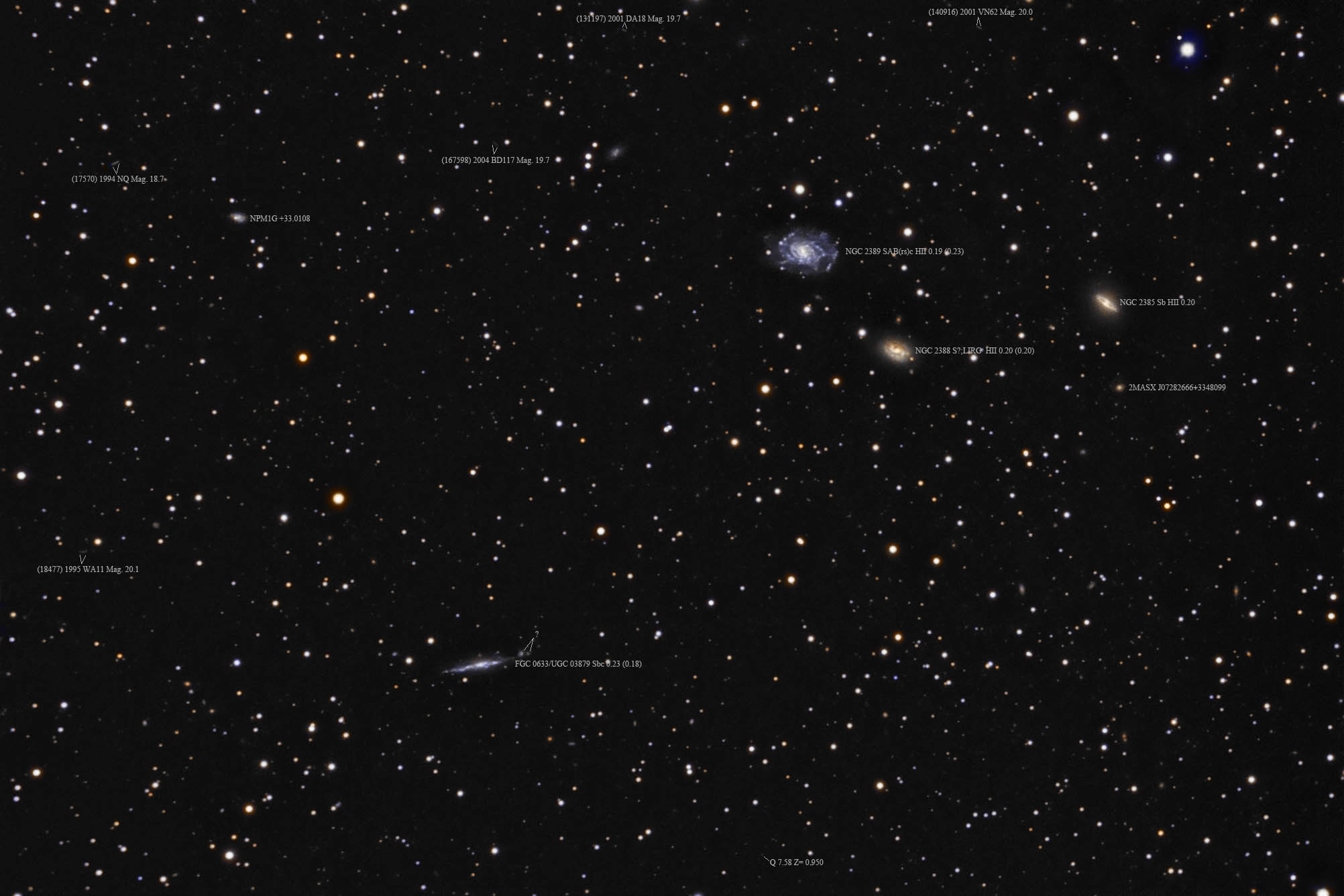