It\'s a bonus when I can get two strange objects in one field. This possibility is why I invested in as large of a chip as was available at the time I bought my camera. This field comes from western Ursa Major between the bear\'s chin and front paws. It consists of two unsymmetrical spiral galaxies, one an edge on flat galaxy the other a face on galaxy that may be flat but you can\'t tell seeing it face on. The flat galaxy is FGC 818 at 110 million light-years by redshift and 180 million by Tully-Fisher. Its core is well southeast of center. About the center is an object NED calls SHOC 231 and lists as \"Part of Galaxy\" indicating its part of FGC 818 but its redshift is 128% as great leaving me confused. I\'ve drawn lines to the location NED gives for each object.

NGC 2701 to the north has the same 110 million light-year redshift as FGC 818 indicating they are likely part of the same group. Its core is well off center but otherwise, shows no hint of interaction with another galaxy. Still, something likely caused this in the distant past. Its core is small with a weak bar. This suggests a small central bulge that could qualify it to be a flat galaxy if we could see it from the side. Then it might look rather like FGC 818. It too has a knot listed at NED as being \"Part of Galaxy\". In this case, it\'s redshift matches. It appears to be a large star cloud in an arm of the galaxy. Several smaller ones are seen in my image as well. A rather bright star on its western edge made this one a bit difficult to process. The dark area below the star may appear to be a processing artifact but is in the raw FITS files and real. This one could fit Arp\'s one-armed spiral category.

Even more interesting may be the apparently interacting galaxies due east of NGC 2701, ASK 052183.0 and SDSS J090022.24+534619.3. I\'ve attached a Sloan Survey image of this object. NED identifies 4 distinct objects here. I\'ve pointed them out in the Sloan image as my resolution isn\'t sufficient.

There was an aurora going on when I took this image. It was weak but added green and red gradients to the image and greatly brightened the background to about 3 times normal. This limits how deep the image goes and gave difficulties with colorful gradients I had to deal with. Thanks to both the signal to noise ratio is lower than I\'d like. But it was a night of better than average seeing so I put up with the aurora. Adding insult to injury it wasn\'t pretty, just a green and red cast to the sky that was brightest in Ursa Major of course. 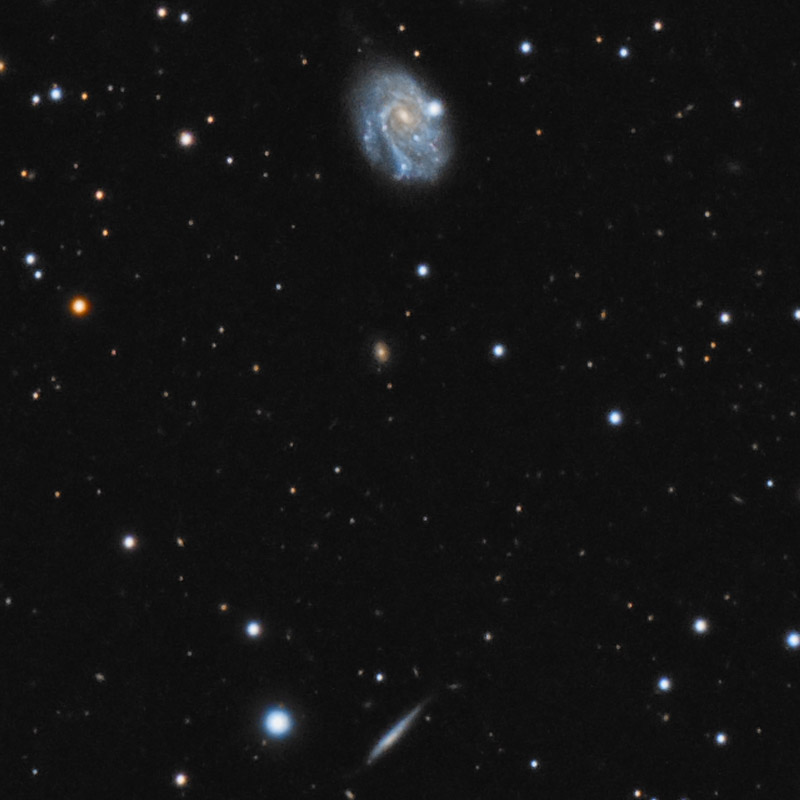 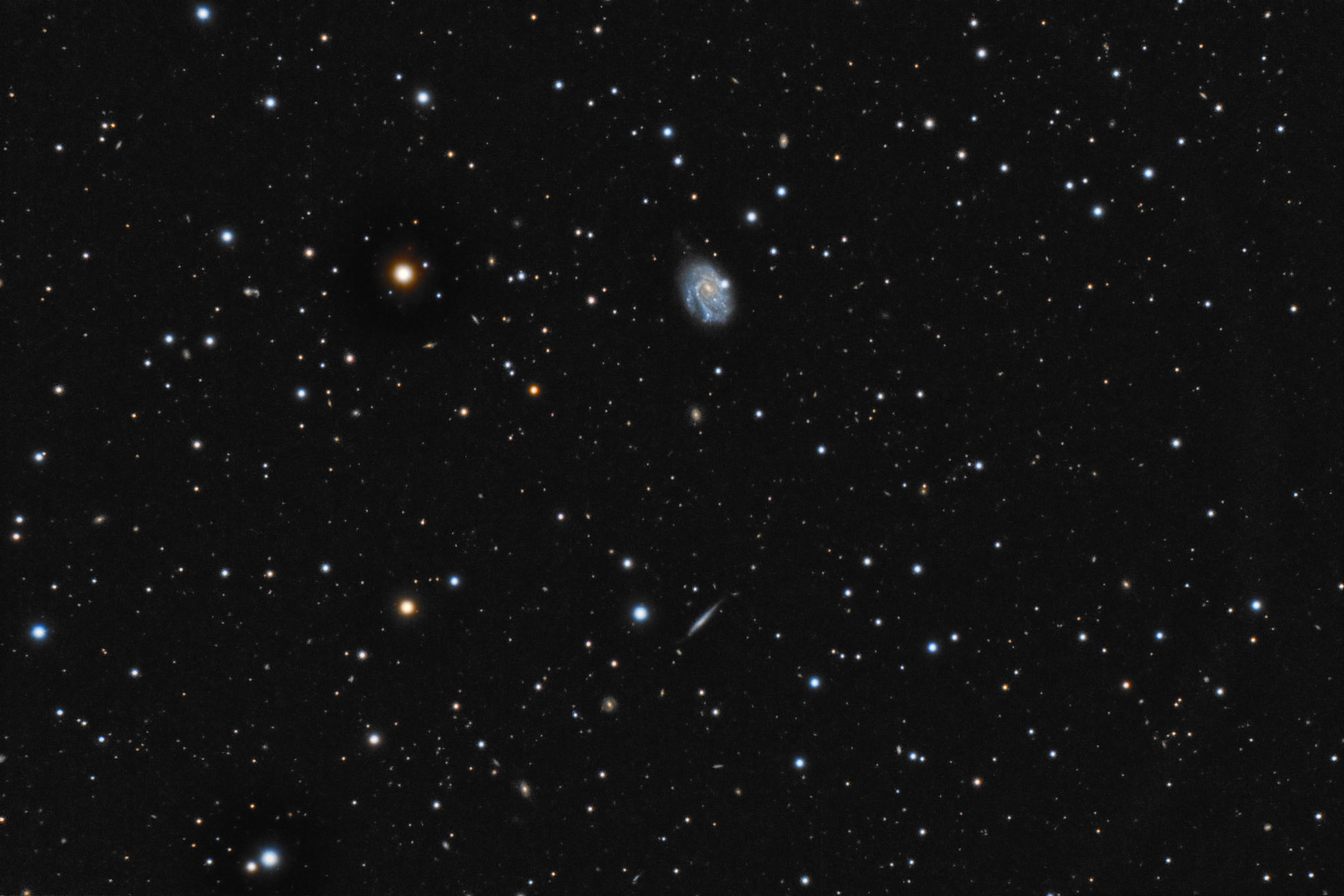 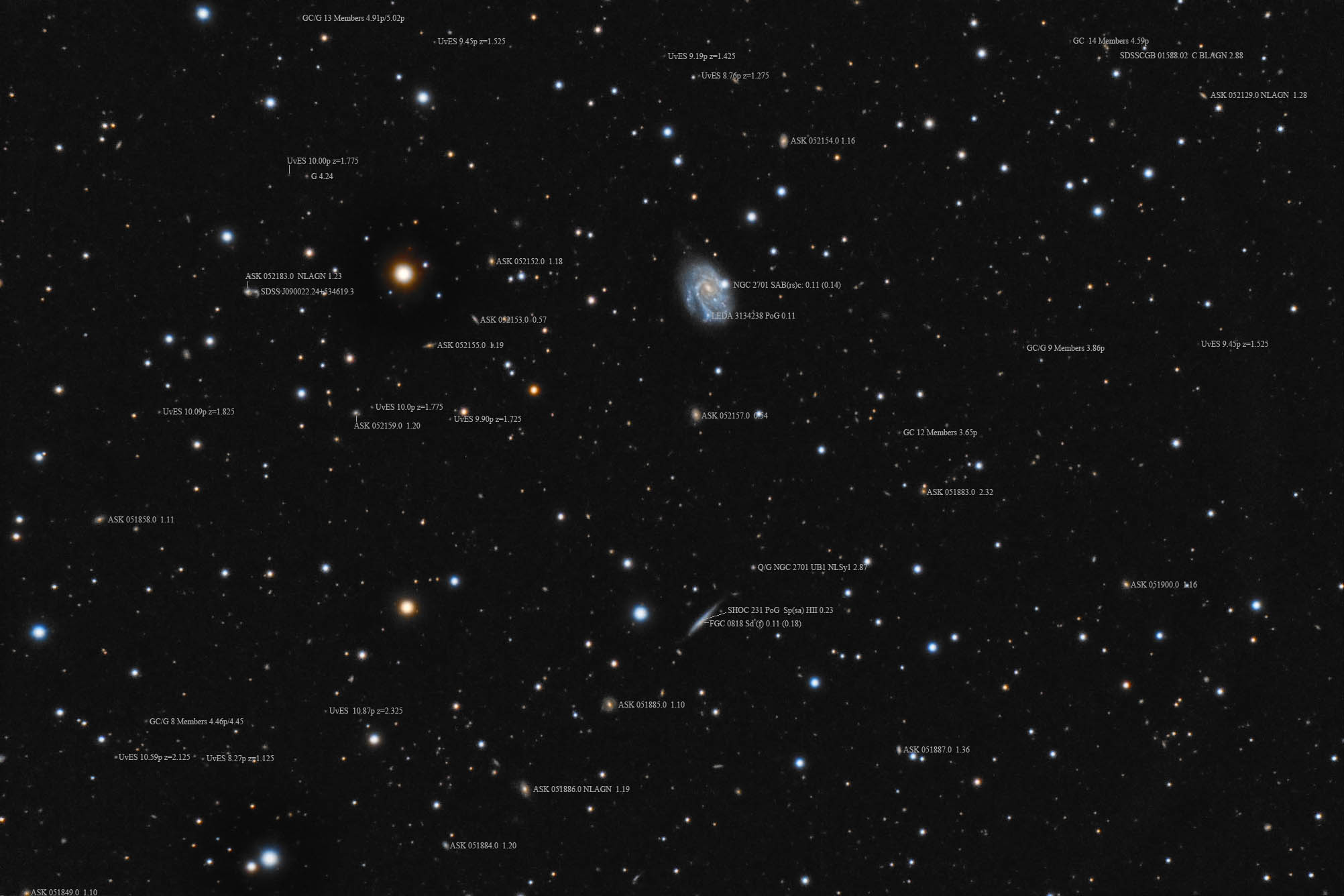 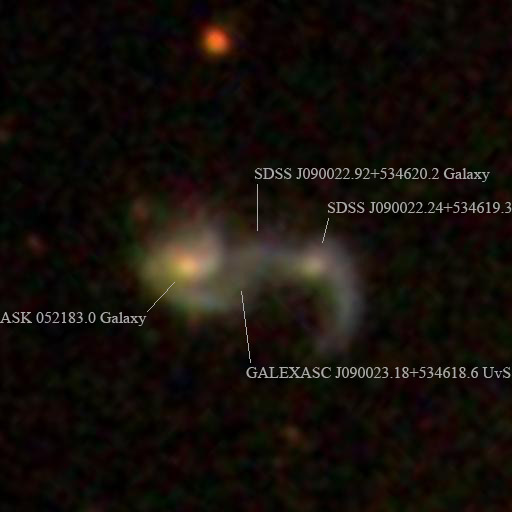