FGC 240A is a very strange galaxy in southeastern Corona Borealis about some 340 million light-years distant. If you are wondering where FGC 240 is it is on the opposite side of the sky at 2 hours rather than 16 hours. How this numbering scheme works is beyond my brain. NED fails to classify though does label the trio of galaxies that is UGC 10273 and includes FGC 240A as a spiral? A paper I found on it says simply peculiar so that\'s what I put on the annotated image. It certainly is weird. The brightest spot a bit below center is actually a blue knot of stars. It appears the real core is further down where it is orange. At the very bottom is another blue knot and a faint plume pointing at a quartet of tiny galaxies, three are in a neat line. The long tail to the north is blue and has much fainter and smaller knots in it. How it got that way I don\'t know. We are apparently seeing it rather edge on. It is obviously severely \"sloshed. I\'d love to know what it looks like more face on. I measure its length at 175,000 light-years. While there are two galaxies known as \"Taffy Galaxies\" (UGC 813 and 12914/5) due to being stretched this one seems even more stretched than those.

The other two members of the UGC 10273 trio are LEDA 1831614 and ASK 361310.0. LEDA 1831614 may have something to do with FGC 240A\'s odd appearance. Though I found nothing to indicate this in papers. This galaxy is quite red with blue seen only at the far end. It is about 40,000 light-years across so rather typical for a spiral of its type. I found no classification for it but it does appear to be a Sa type spiral also seen rather edge on to my eye.

The third member, ASK 361310.0 appears somewhat separated from the other two though that may be only due to perspective. It could actually be closer than LEDA 1831614. Redshift puts it slightly closer though this may just be due to its motion relative to the other two. It is only some 29,000 light-years across. Again no one I found classified it.

I mentioned the four tiny appearing galaxies below the southern plume of FGC 240A. Are they dwarf members of this group? Another name for the trio is VV 489. One paper said they were likely part of the VV 489 group though I can\'t see them actually included the VV catalog. It also identified them as one galaxy not 4. I just assumed they were distant background galaxies. Seems more reasonable to me along with several others NED had no data on close to FGC 240A.

7 galaxies have a redshift distance of 0.70 or 0.71 lightyears. I assume they are all related but found nothing on this.

No asteroids were in the image. 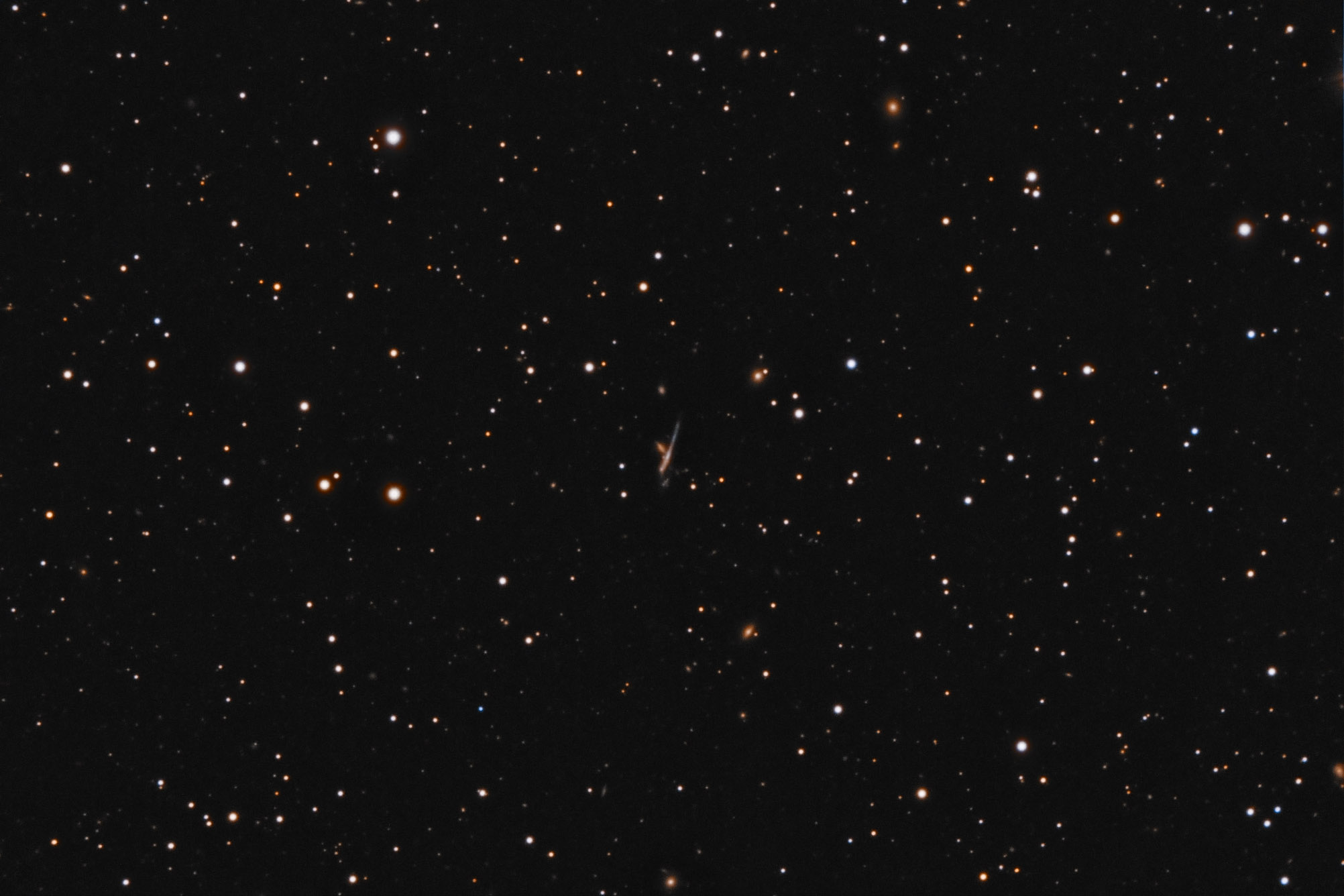 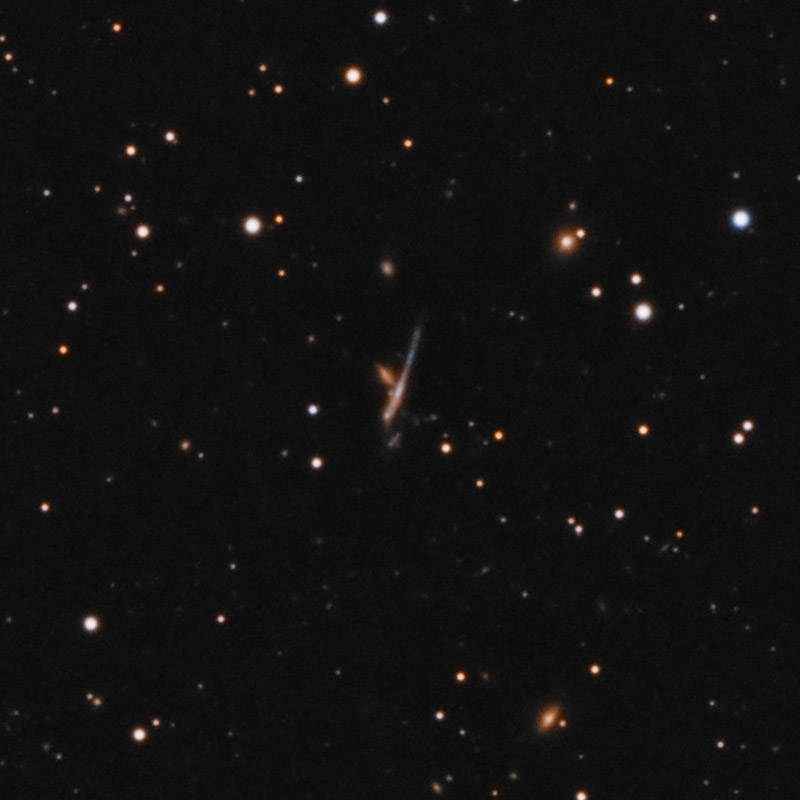 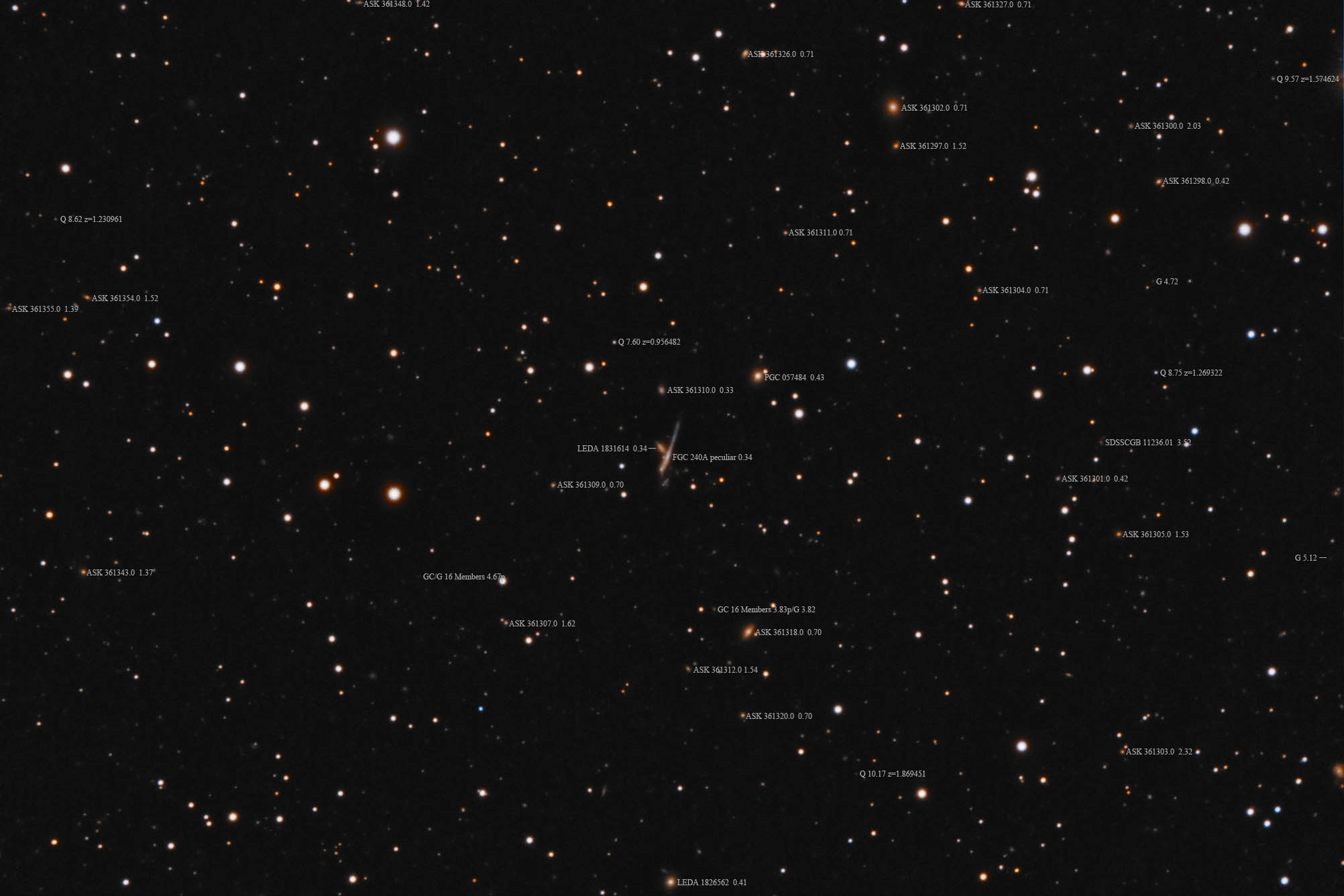