Hickson scoured the POSS plates and cataloged small compact groups of galaxies. One I found very interesting is #67 in the list. Interesting because Hickson and others got it wrong it appears! Probably because most work from the POSS plates which overexposed the core galaxy of the group hiding its true nature.

The group consists of two major galaxies, NGC 5306/VV135 and MCG -01-35-013. MCG -01-35-013 is a nice edge on, somewhat distorted, spiral. The southern arm is rather odd. The dust lane ends and suddenly the arm gets very narrow and blue. The transition is very sudden and unusual. The galaxy has not been studied that I could find.

NGC 5306 is where things go wrong. By all catalogs, NGC 5306 is the center \"galaxy\" with two others, north and south of it, not considered part of NGC 5306. The Vorontsov-Velyaminov Interacting Galaxies catalog, however, does include the galaxies to the northeast and southwest as they reside in a common halo. But all catalogs miss the fact that the core galaxy is actually two galaxies. NED doesn\'t show them separately nor does any catalog I could find. On the POSS 2 plates, they merge into one due to overexposure. Apparently, no one looked further. The VV catalog lists the pair as VV 135a as I\'ve shown in the annotated image. The other two being c and b of course. NED classes NGC 5306/VV 135a as either S0 pec or E1. The NGC project says S0P? The redshift value like their classification is apparently a mash-up of that for both galaxies.

This field was recommended to me by Sakib Rasool so I contacted him to ask if he wanted me to image it because he suspected that NGC 5306/VV135 was a double galaxy. Nope, it came as a surprise to him as well--he\'s not easy to surprise. He was interested the spiral MCG -01-35-013 as it appeared warped or distorted on the POSS plates. After my email, he did some digging and contacted the astronomer John Hibbard, who studies interacting galaxies. Dr. Hibbard then did some digging and came up with one paper on it I\'d not found. http://aas.aanda.org/index.php?option=com_article&access=doi&doi=10.1051/aas:1999513&Itemid=129

The paper labels it a double core galaxy; n1 and n2 which I labeled on the annotated image. But it goes on to indicate the authors feel these are two superimposed galaxies not as close as their angular separation indicates. I would agree with this as while the overall halo is oriented toward VV135b and VV135c, n2 is oriented almost at right angles to this. Oddly it is the brighter of the two, however. This would need some explanation it would seem. This is one group that needs a lot more study and some catalog asterisks or corrections.

VV 135b is classed as S0 pec. I don\'t know what causes them to tack on the peculiar label. VV 135c is classed Scd. It sure has some odd structure to it. Unfortunately, the structure is beyond my abilities to determine what it is. It certainly looks disturbed but somehow avoided the pec label.

A few other galaxies are scattered across the image that are members of the same group as HCG 67. Others are about twice as distant. The field is little studied with most galaxies being anonymous.

While the image is my usual size in pixel count it was taken at 0.5\" per pixel rather than my normal 1\" per pixel so covers only one-fourth the area of my normal images. As such, most of the remaining members of the group containing HCG 67 lie beyond the field of view. If I\'d used my normal field it would have made a 4 times bigger image and too big for the Internet. Though now I wish I\'d have taken the full field and reduced it to my normal scale of 1\" per pixel, I\'d have picked up almost a dozen other members of the group. I can\'t find any catalog entry for the entire group, just pieces of it. It is rather widely scattered. I was hoping to bring out a jet that one source says is coming from the nucleus of NGC 5306 but I don\'t see it. How they find such a jet yet miss it is a double galaxy I can\'t understand. I\'m wondering if the \"Jet\" is really N2 sticking out of the overexposed blob they both make on the POSS 2 plates. Since it is already at a greater image scale than my normal cropped images I\'ve not done one this time, just a cropped version for those who complain my images are too big.

Dr. Hibbard\'s email goes on to say about Hickson 67: \"It appears to be the central concentration of a larger group with at least 15-17 members. About 10-15% of HCGs are thought to be such creates, and thus not true compact groups in the way Hickson meant.

\"These double nucleated ellipticals are interested - they are sometimes considered examples of galactic \"cannibalization\". About 25% of cD galaxies have multiple nuclei (although I am not sure if NGC5306 is a full-blown cD; that requires it to have an extended luminous envelope). See e.g. http://ned.ipac.caltech.edu/level5/March02/Sarazin/Sarazin2_10.html.

\"Well, back to work. Thanks for the diversion and beautiful image!\"

For a bit there I thought I might have found something previously unknown. Nope, just something hidden deep in the literature. Still, finding something this obscure is quite exciting. 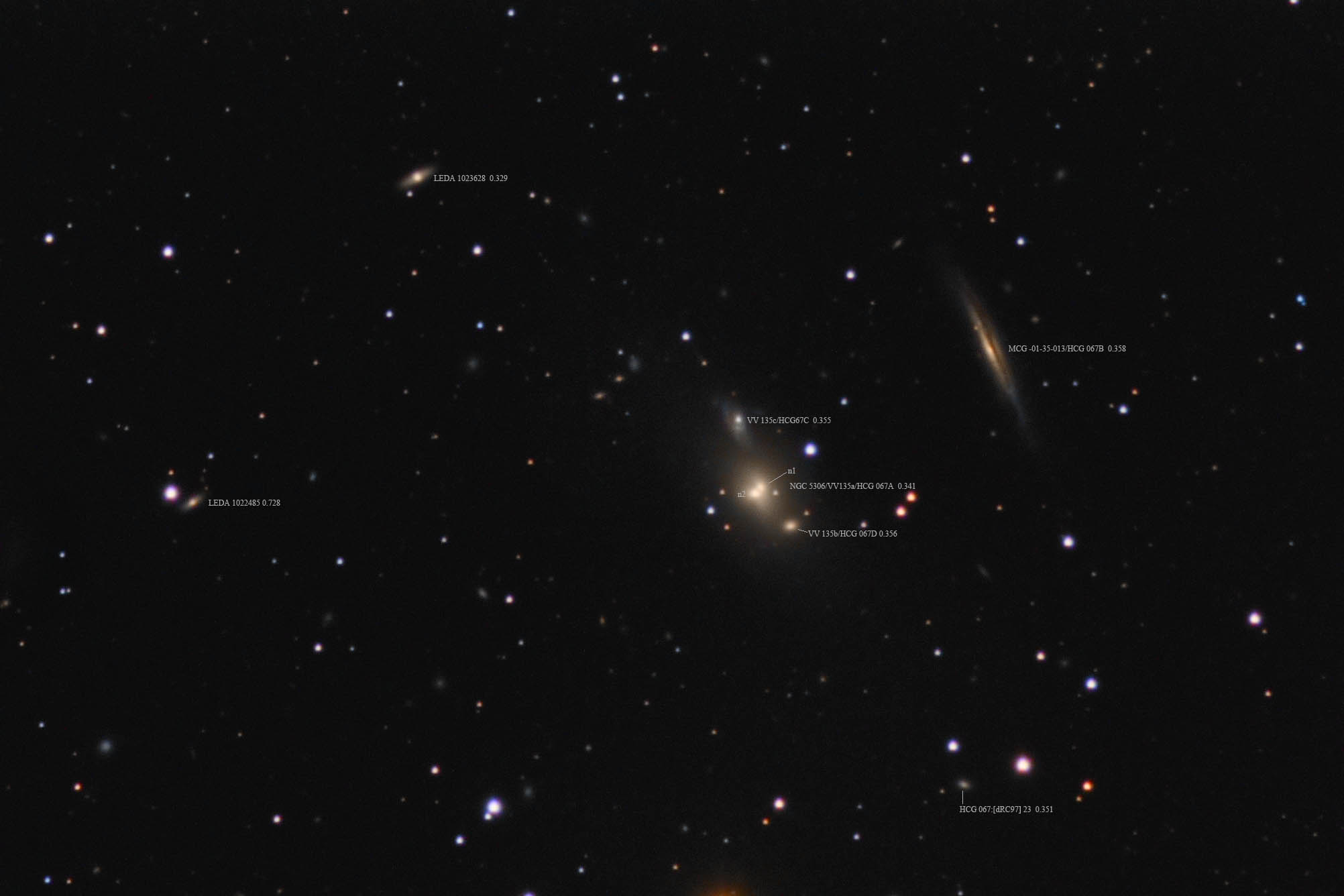 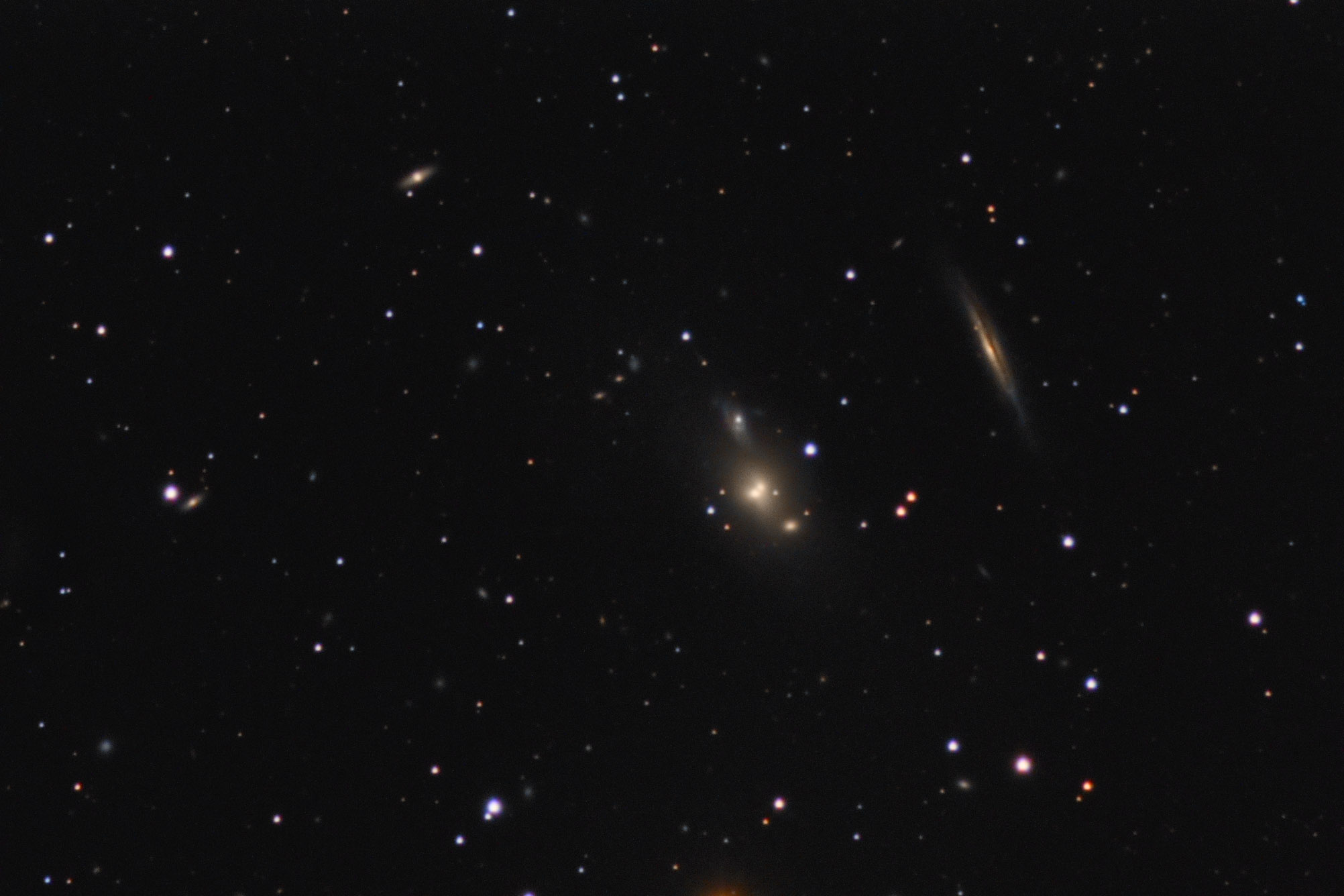