HCG 82 consists of 4 galaxies in far western Hercules west of the Keystone. It consists of 3 NGC galaxies and one PGC galaxy, NGC 6161-6163 and PGC 58231. The three NGC galaxies were discovered by Édouard Stephan on June 30, 1870. Hickson had no distance data when compiling his 100 groups. He assumed most would be related due to their close proximity to each other. In this case, they may be related though their redshift shows a rather wide range of values from about 460 million to 530 million light-year distance, a 70 million light-years difference. This is probably due to their orbital velocities around a common center of gravity and not a real distance difference. An average would put them just under a half billion light-years distant. I measure the group as being about 530,000 light-years across assuming they are all at about the same distance. NGC 6162 is the big one at 185,000 light-years across. NGC 6163, thanks to its wide \"wings\" is 125,000 light-years in size. NGC 6161, thanks to its plumes is nearly as large as NGC 6162 at 180,000 light-years though I suspect its mass is much less. Also, this size argues strongly against it being an irregular galaxy though its core region with the dust lane is only 65,000 light-years in diameter. PGC 58231 is the baby also at 65,000 light-years. Still a respectable size for a spiral galaxy.

NGC 6161 is listed as an Irregular Magellanic galaxy by NED while Seligman and the NGC project say Sc though Seligman adds a question mark. I see it as a disrupted spiral. I suppose its distortion is due to interaction with one or more of the other galaxies in this group. Only NGC 6163 appears possibly distorted so I\'ll say it is the cause. But if NED is right it may be just naturally this way.

The annotated image shows a scattering of other galaxies that have a similar redshift to those of HCG 82. All appear to be dwarfs compared to the 4 HCG galaxies. There is the usual mix of distant galaxies and quasars in the field. Nothing caught my eye as interesting, however.

As with many of my spring images, sky conditions were poor when this was taken. At least seeing wasn\'t all that horrible but there was a thick haze in the sky. 7th magnitude HD 148616, the K0 star to the lower right cast a glare from the haze over the entire image. Removing it was a major pain. Also, the haze severely harmed the blue image to the point it was very noisy. I should have taken more blue frames but the clouds didn\'t allow it this night and after this, the moon was a major problem. I went with the poor color data though as I\'ve mentioned several times before the color is rather suspect due to high noise in the blue data. Also, clouds were kind to the first green frame but totally eliminated the second green frame. Still, it\'s one frame had a much higher signal to noise ratio than the two blue frames. 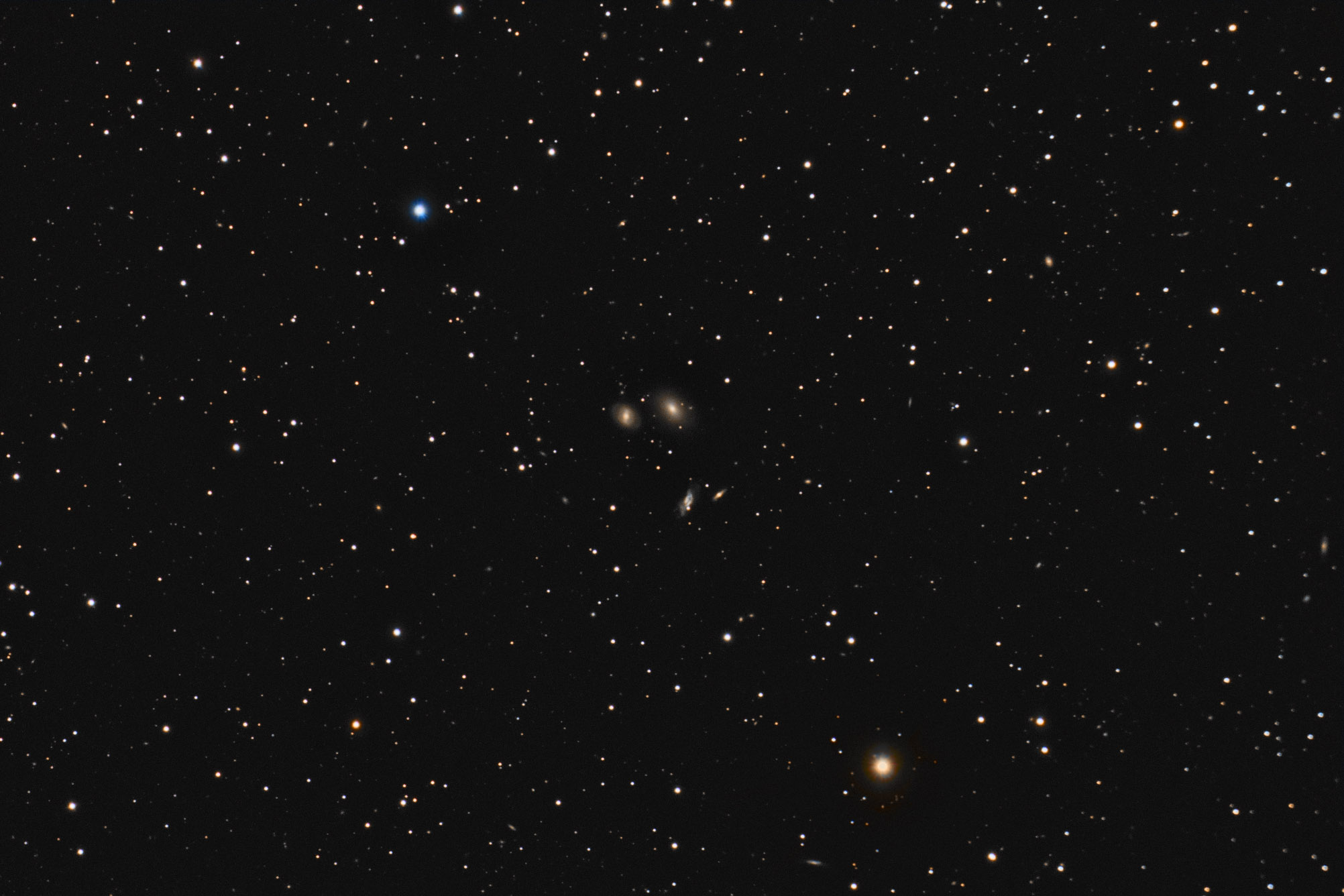 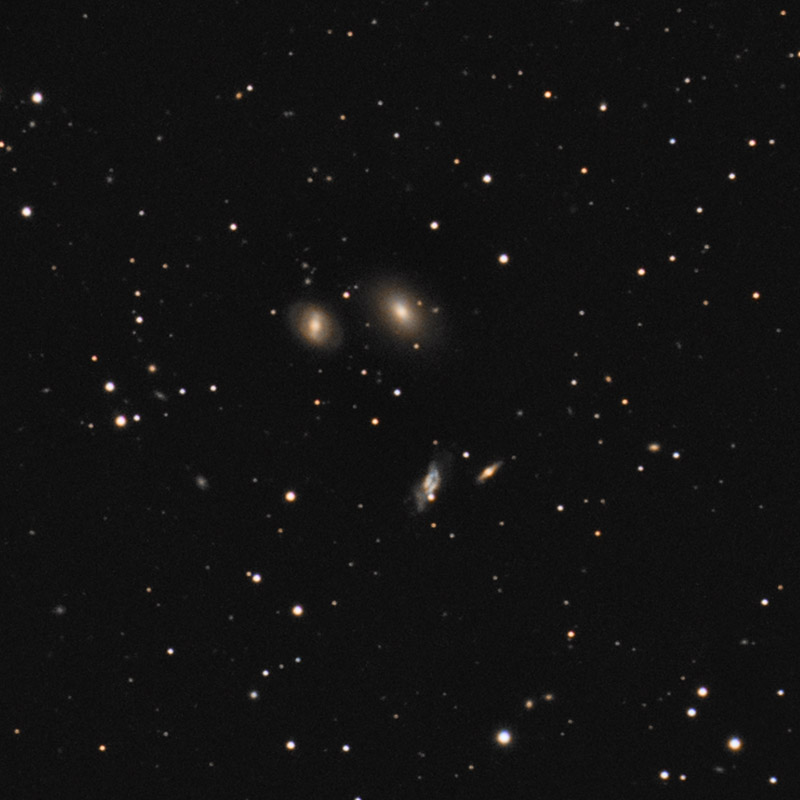 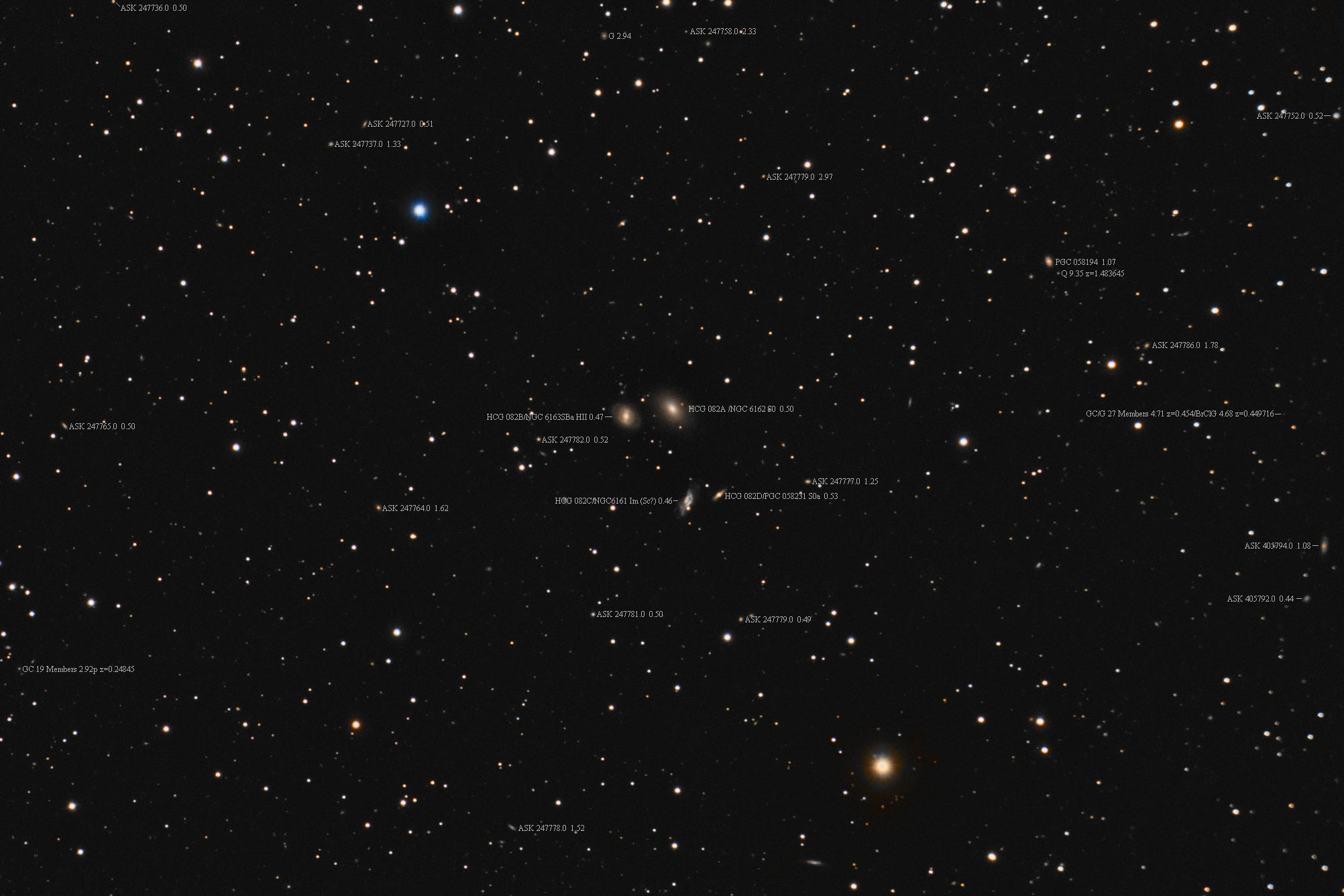