This field made my to-do list for two reasons. First is the galaxy NGC 5008 which has some fascinating plumes and houses an AGN at its core. Both indicate it has recently interacted with or devoured another galaxy. Also, it is the major galaxy in the Hickson Compact Group 71. I\'m slowly working on those that interest me as well. The field is located in Bootes.

NGC 5008 is classified as Scd: by NED; SBc by the NGC Project; and SBc? by Seligman. So does it have a bar or not? Maybe. I can see arguments both ways. Its arm structure is weird for either barred or not barred spirals. While there\'s a hint of arms starting from a very faint bar they die out quickly and spiral counterclockwise. Other arms start from nothing and go for much further and are often brighter yet spiral clockwise. They are also bluer than those coming off the possible bar. An inner counter-clockwise and outer clockwise spiral pattern with plumes would indicate some sort of merger. I find it odd no one tacked on the peculiar label. By redshift it is some 430 million light-years distant though non-redshift measurements put it slightly further.

It was discovered by Heinrich d\'Arrest on May 18, 1862. But unfortunately he recorded its hour angle one hour off and noted the nearby 10th magnitude star as being north when it is south. I\'ve greatly dimmed it in my image so it appears much dimmer but still the brightest of the three to the south as otherwise its glare was very distracting from the galaxy itself. It was then recorded as NGC 5008 at the wrong position. So when Stephane Javelle later found it on June 15, 1895 and recorded its position correctly it became IC 4381. It was only later that d\'Arrest\'s error was discovered and the two realized to be the same galaxy. Then Hickson in recording his compact galaxy groups included it along with IC 4382 and two others (see the annotated image) as his group #71. We now know that while three of these galaxies are likely related and have similar cosmological redshifts HCG 71D has a redshift putting it twice as distant as the other three. I notice NED, while listing all four as part of the group gives the count for the group at 3, not 4. Is it excluding this more distant member?

The other four are IC 4382, HCG 71B, which also houses an AGN and is listed as an Sb edge-on spiral, PGC 50640 which is HCG 71C is listed as an Sbc spiral and the outcast PGC 50641/HCG 71D listed as an S0 galaxy at 910 million light-years. It is also the furthest from the center of the group. There appear to be other galaxies in the area that are members of the group as they too have redshifts very similar to that of NGC 5008. LEDA 214226 to the north may appear to be double in my image but the northern object is a very blue star and ultraviolet source. Then to the northeast is LEDA 1741935 which has a very off-center core making it look like a comet. It too shares about the same redshift. More ordinary looking is LEDA 4405543 to the east-northeast. It is the smallest of the group. To the north-northeast is the very low surface brightness apparently spiral LEDA 4556417. Another dwarf member of the group is LEDA 4404962 far to the north. But even further north is NGC 5498 a large S0-: galaxy that too shares the same redshift and looks possibly the most massive of the group. Others are found outside my field.

While HCG 71D isn\'t a true member of the group it does appear to be part of a different group of galaxies seen scattered over the image. However, I found no cataloged group for either of these two other than part of the closer being part of HCG 71. Considering how many strange galaxies are in the closer group I\'m surprised it hasn\'t received any significant attention. 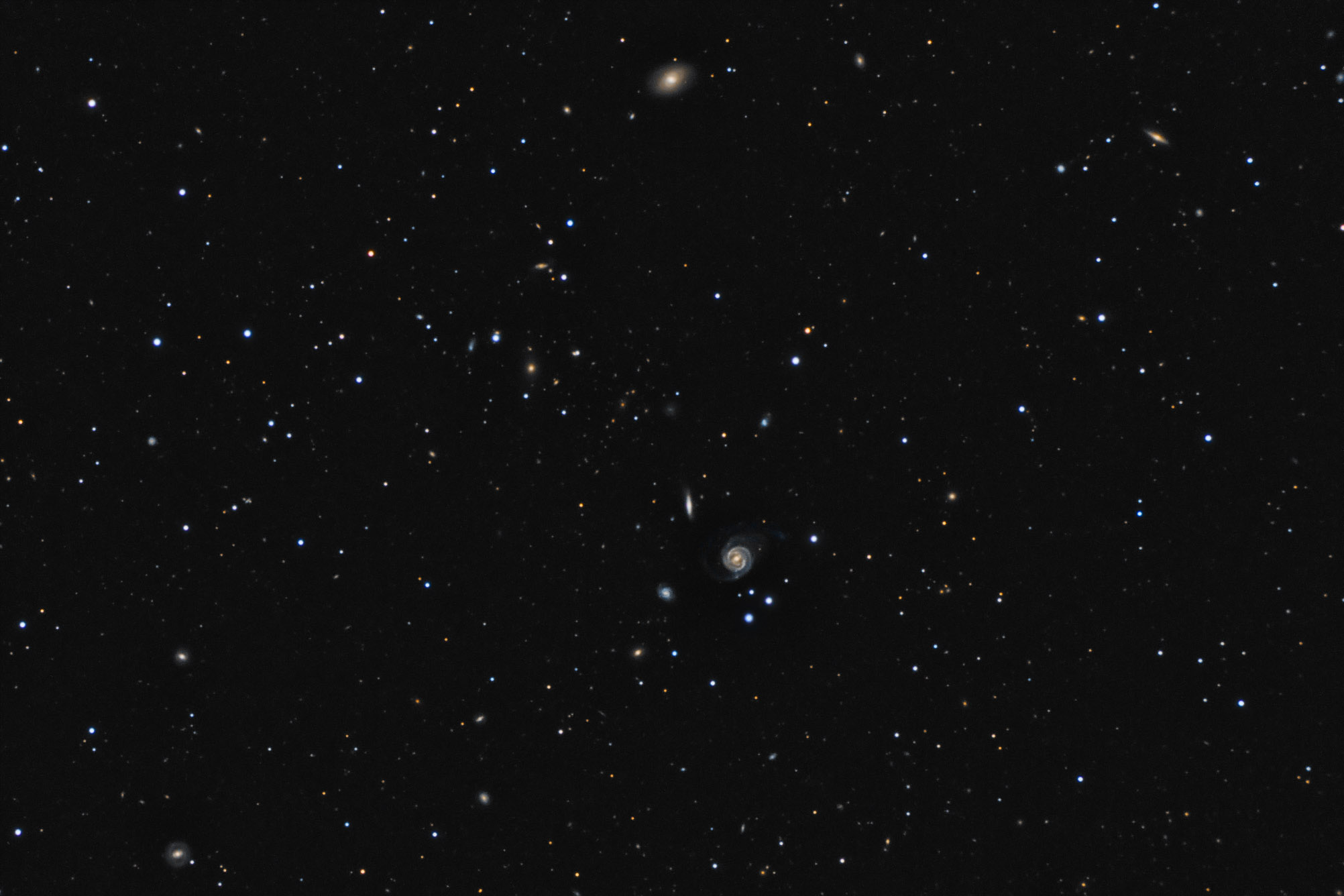 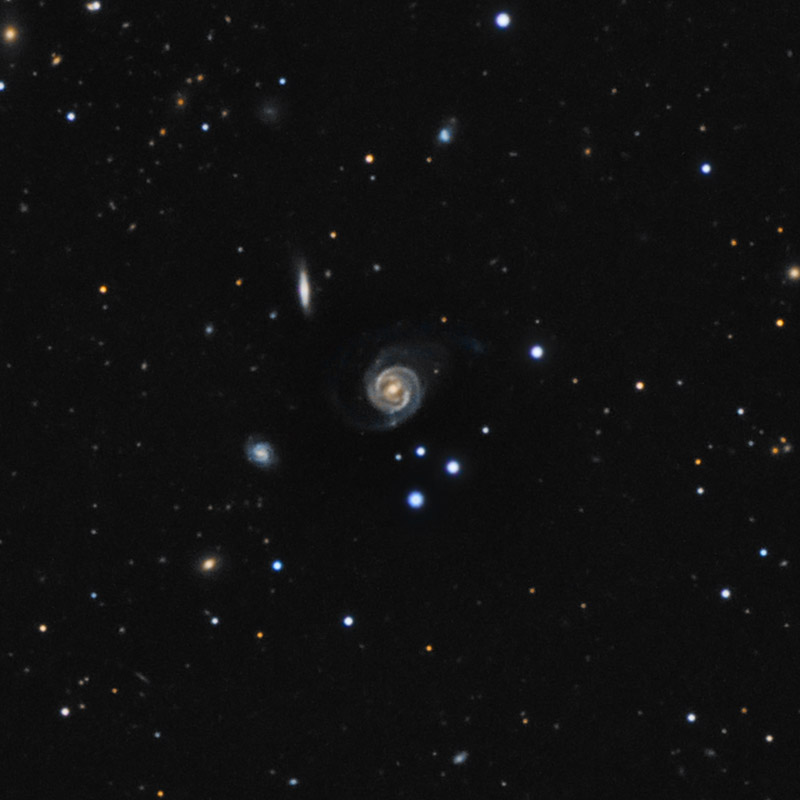 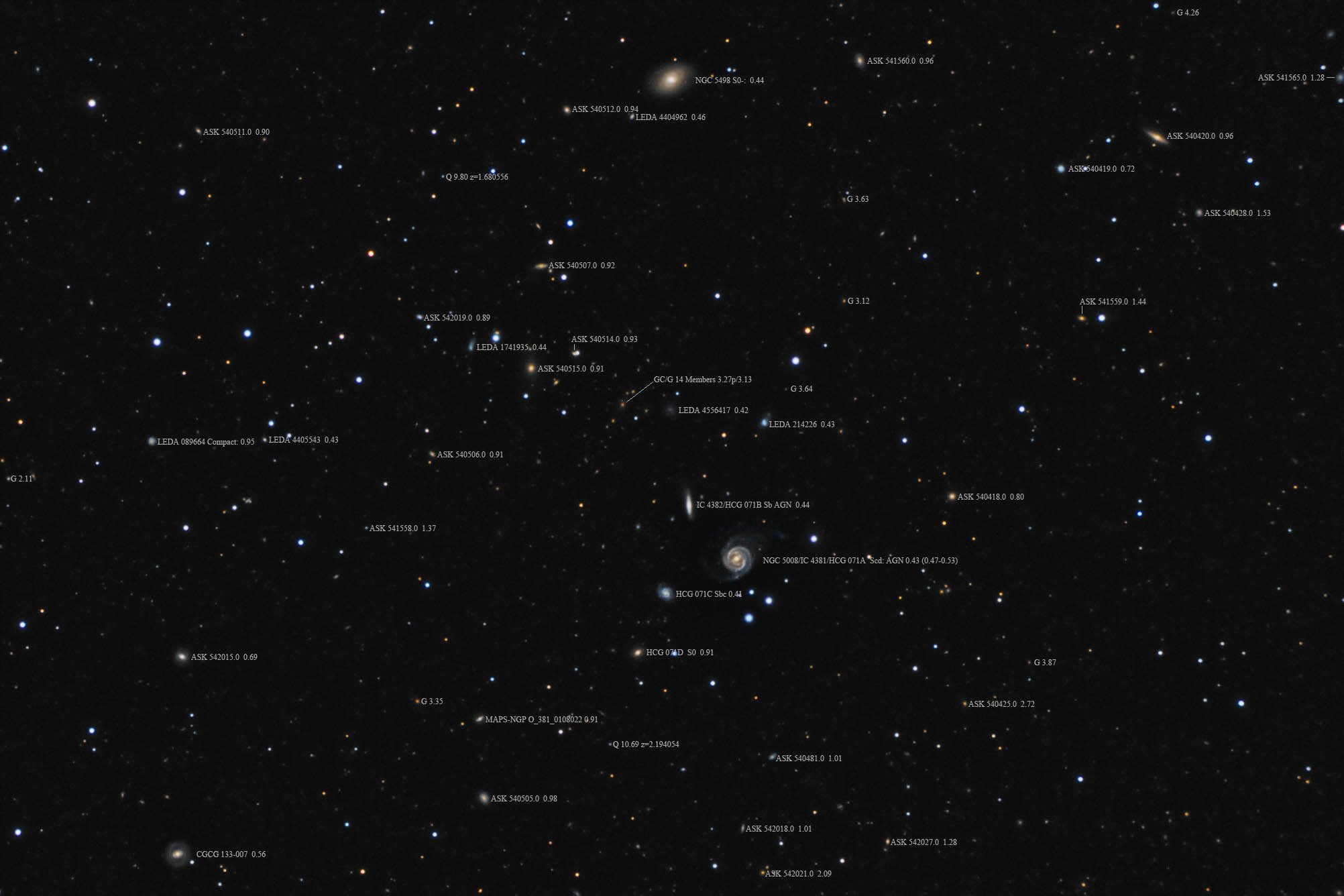