This is another twofer image. Both NGC 4532 and Holmberg VII were on my to-do list. If I\'d not been around to override the system it would have taken two images centered on each galaxy. Fortunately, I caught it and saw I could put both into the same field saving me imaging time which with the cloudy weather we\'ve had that is very hard to come by. SIMBAD classifies both as \"Interacting Galaxies\" But does this mean they are interacting with each other? SIMBAD is moot on that. As there\'s nothing else in this part of Virgo (the field is south of the center of the cluster) I assume that is what they are saying. The distance to this pair is also a bit vague. Redshift puts them almost 110,000,000 light-years distant. But most papers say these are members of the Virgo Cluster. If so they must be about 60 million light-years distant +/- about 20 million light-years. Non-redshift measurements of NGC 4532 put it 44 million light-years distant while Holmberg VII had only two such measurements, one put it about the same as the redshift distance while the other agrees rather well with the consensus for non-redshift distance measurements of NGC 4532. Most papers go with the non-redshift measurements as the redshifts of true Virgo clusters very widely. If the two are interacting and it\'s an ongoing interaction then the two might reasonably be expected to have similar redshifts right or wrong. Both are classified as irregular Magellanic type galaxies. If the redshift values are right they are 50,000 and 100,000 light-years in size. Large for this class of galaxy but not impossible. If the non-redshifts are correct then they are 20,000 and 40,000 light-years across. More typical of their class but this isn\'t definitive. The HST apparently hasn\'t taken these. It should be able to help answer this question if and when it does.

There are a lot of galaxies in the image with a distance of 1.05 to 1.10 billion light-years. I suspect they are related. I didn\'t check very far outside the field but didn\'t see any cluster in NED to match.

There\'s one very bright asteroid in the image and a faint one. The bright one is named for Vivian Hoette. The naming citation reads: \"Vivian Hoette, an educator at the Yerkes Observatory, holds astronomy workshops in the Midwestern U.S. She also contributes internationally by means of a live show between Yerkes and the Science Museum in Tokyo, where an afternoon audience in the latter can see the Yerkes night sky.\"

This image was taken on a night of an unusually high background brightness which limited how faint I could go. I had to omit many galaxies I\'d normally see clearly. 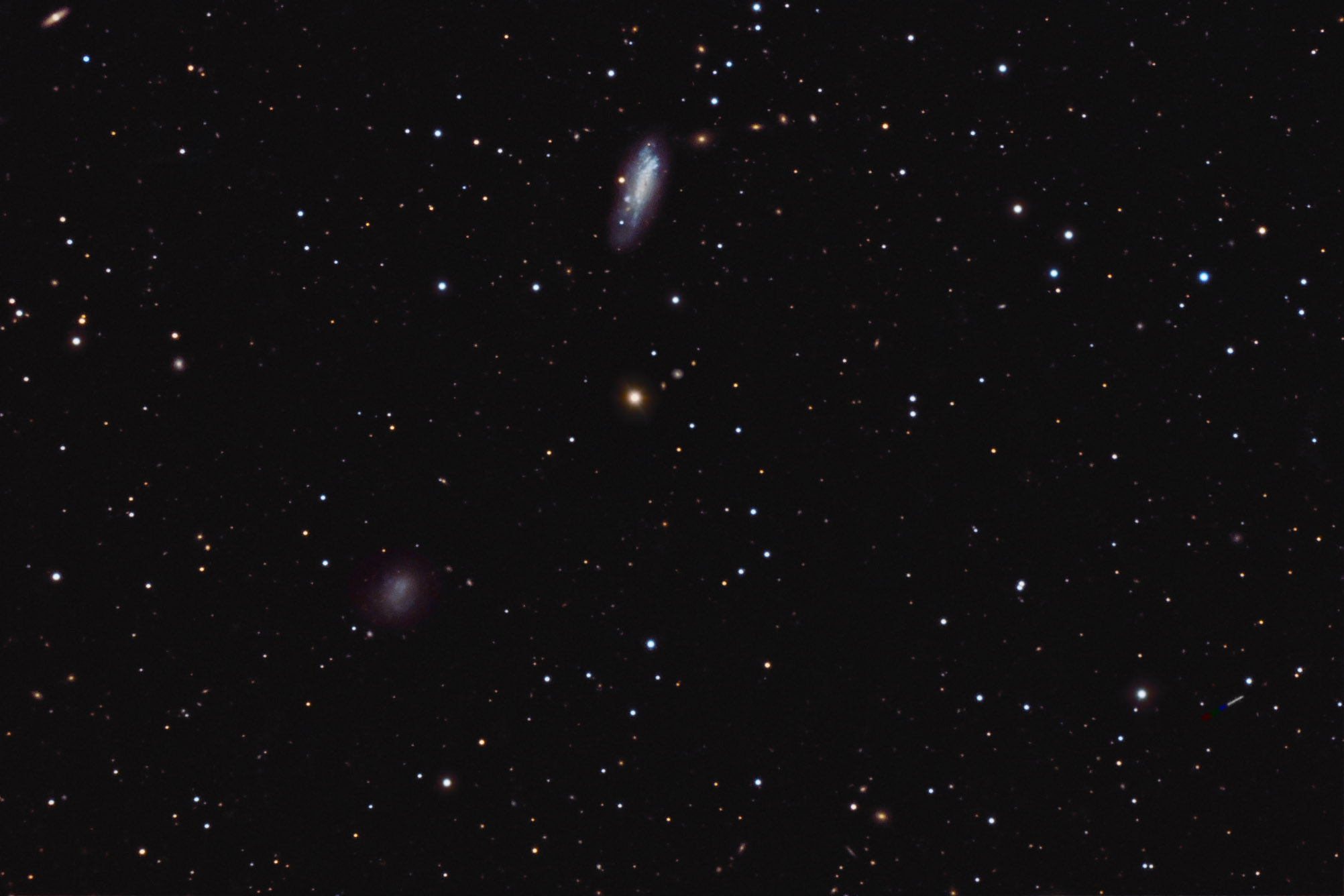 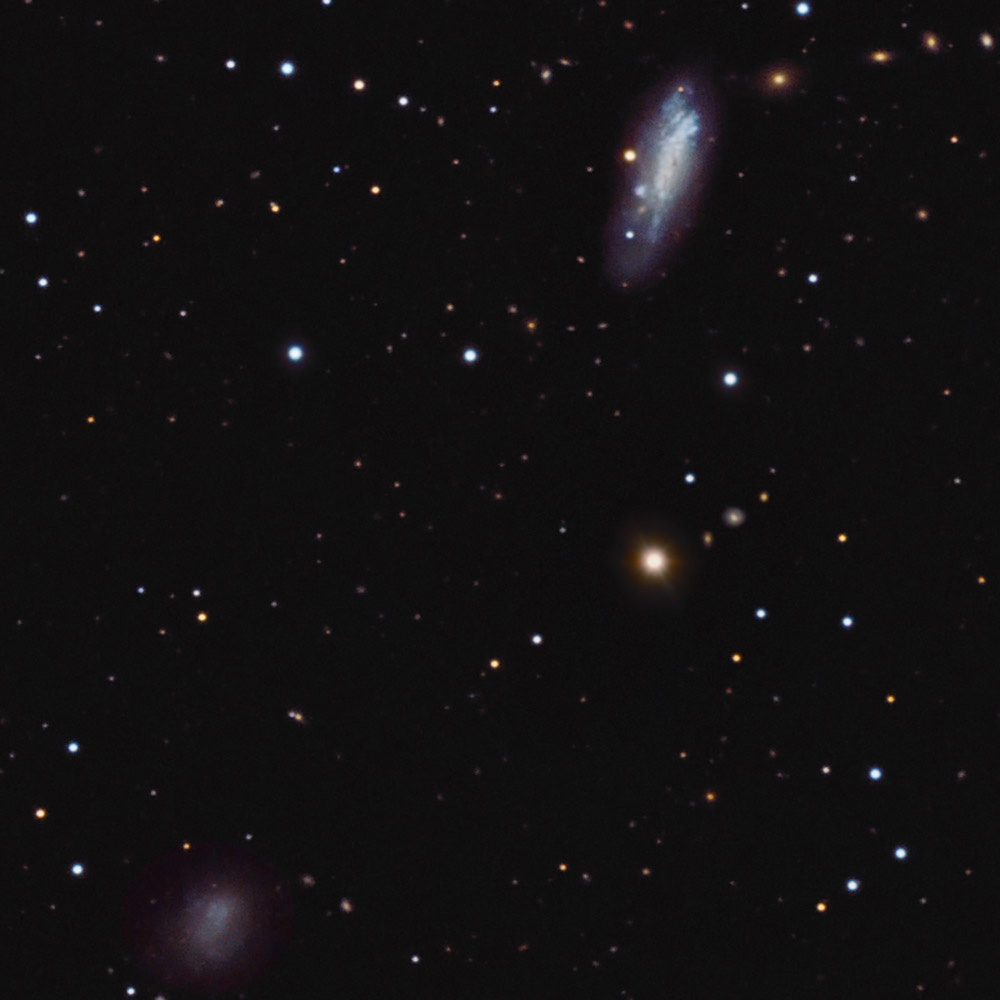 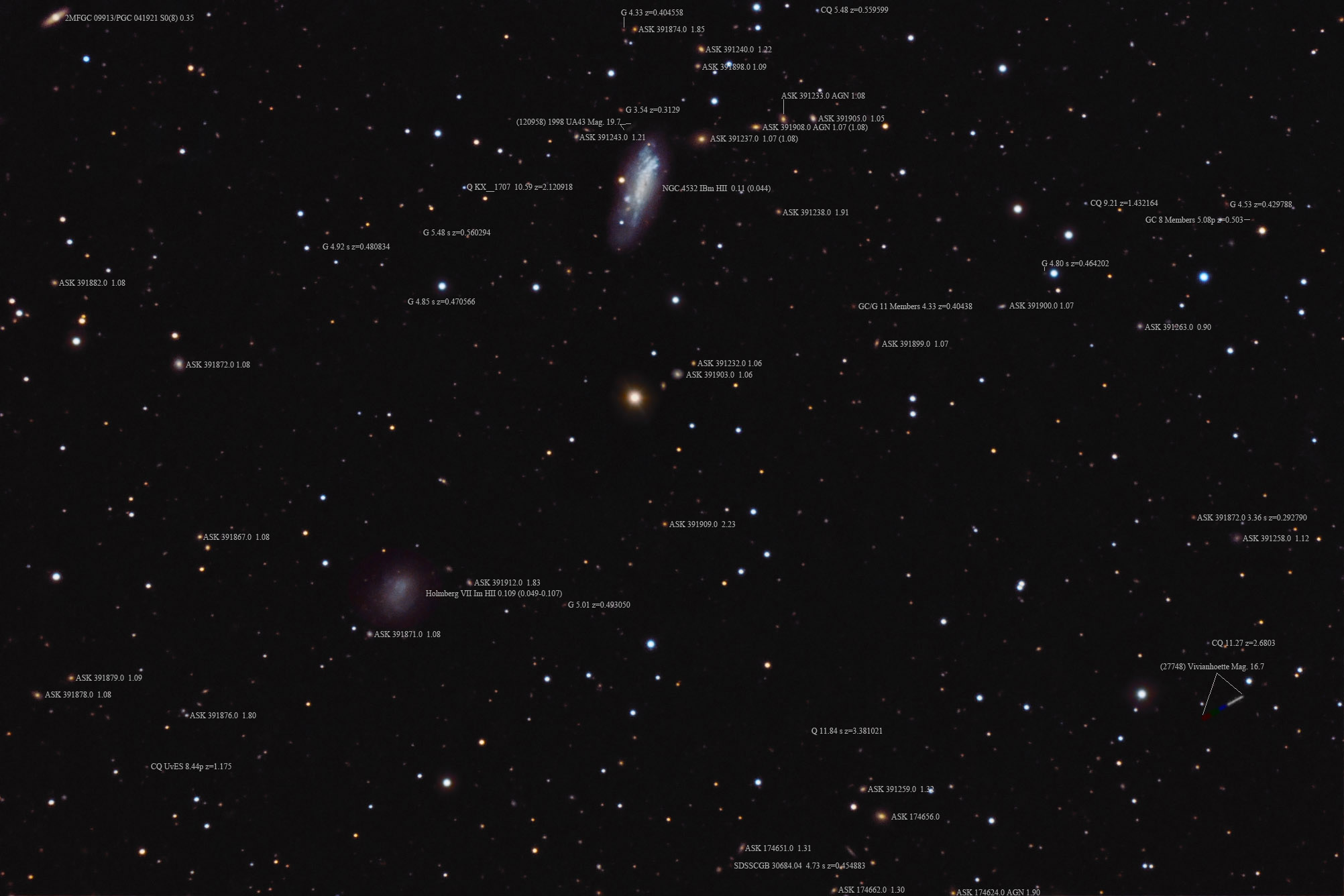