Holmberg VIII/UGC 8303 is a companion to the far more famous NGC 5033 to the north out of my field of view. It is located in Canes Venatici. Distance measurements for it range from 54 million light-years by redshift to 66 by a Tully-Fisher measurement. But as it is considered a satellite galaxy of NGC 5033 the distance to that galaxy must be considered. That covers an even wider range with APOD and a couple other sources settling on 38 to 40 million light-years. NGC 5033 is considered to have two satellites much like we have the two Magellanic Clouds. They are Holmberg VIII and UGC 08314 also in my image to the upper left of Holmberg VIII. NGC 5033 is also considered to have been affected by NGC 5005 which I\'ve not yet imaged. Which, if any caused the strong warp seen in NGC 5033 I wasn\'t able to determine.

Holmberg VIII is classed by NED as IAB(s)m while UGC 08314 is listed as Im:. UGC 08314 has a redshift distance of 54 million light-years, same as Holmberg VIII. Since it is closely tied to NGC 5033 out of the image which many sources say is 40 million light-years away that is more likely the correct value. It has an odd vertical structure in the middle and then a large very faint western half. The eastern side has more bright areas and a small dim one to the northeast. A very unsymmetrical galaxy indeed.

A bright blue blob inside of Holmberg VIII is identified by NED as SDSS J131318.46+361210.6. While listed as a separate galaxy it looks to me to be just a star cloud in Holmberg VIII. I\'ve listed it in the annotated image. It does show a very slightly smaller redshift but I don\'t see that as sufficient to call it a separate galaxy.

It seems every field I image has some discrepancy when I dig into my research. This one is especially surprising. To the west of Holmberg VIII is the galaxy group SHK 248 with 9 members at a distance of 3.15 billion light-years. The problem is a possible member on the western side. NED shows two designations for it. SDSS J131210.13+361112.1 is at the right position showing a distance of 2.32 billion light-years. Too close to be a member. It\'s magnitude is in close agreement to my measurement, 18.6. NED also lists 4\" of arc to the northwest at a position where nothing is seen, even on the Sloan survey image, 2MASX J13121012+3611117 a galaxy at magnitude 19.4 at a redshift distance of 3.15 billion light-years, correct for the group. It\'s position is listed with an error circle of 1\", insufficient to overlap the only galaxy in the area. I tend to believe the Sloan data placing it too close to be part of the group. 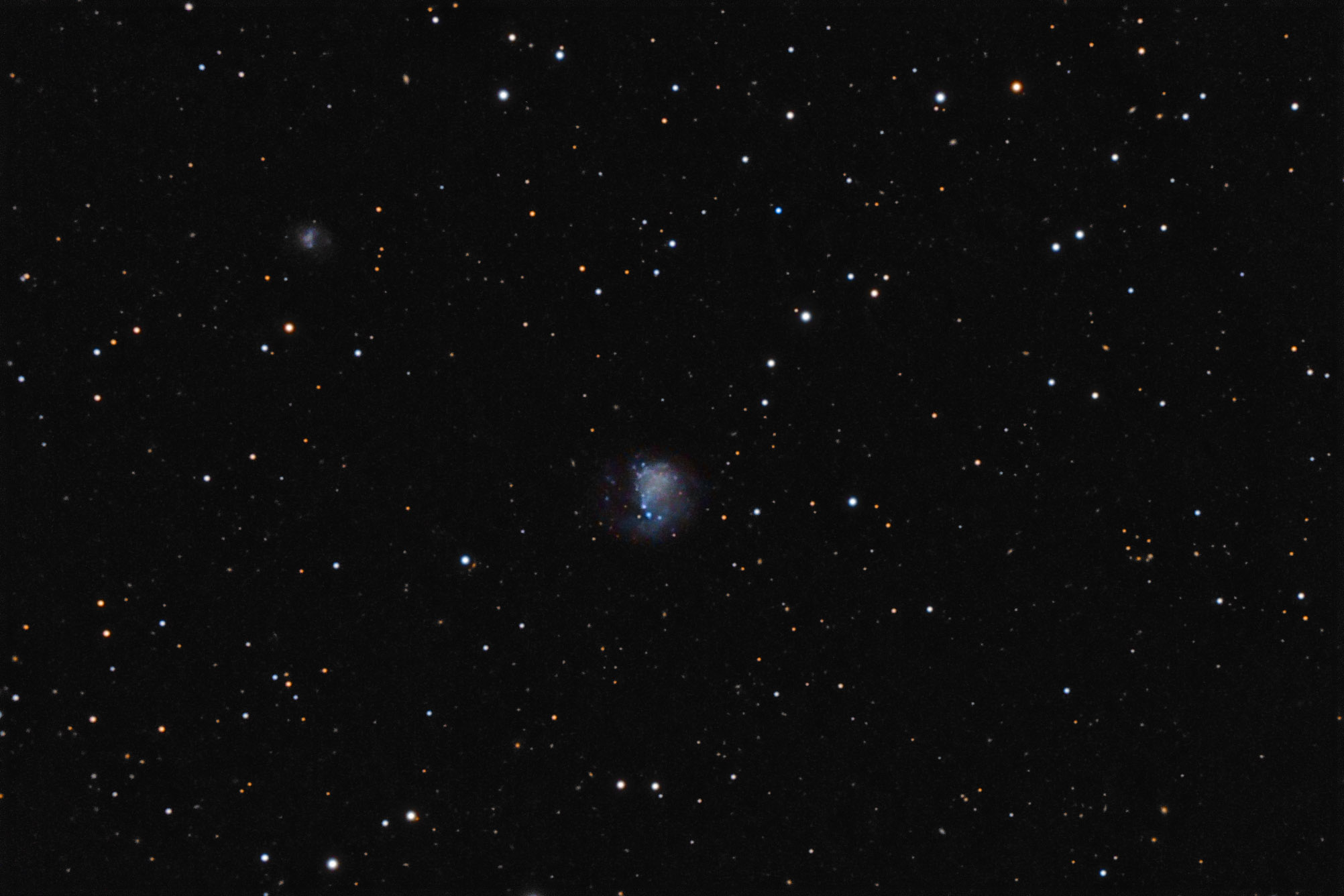 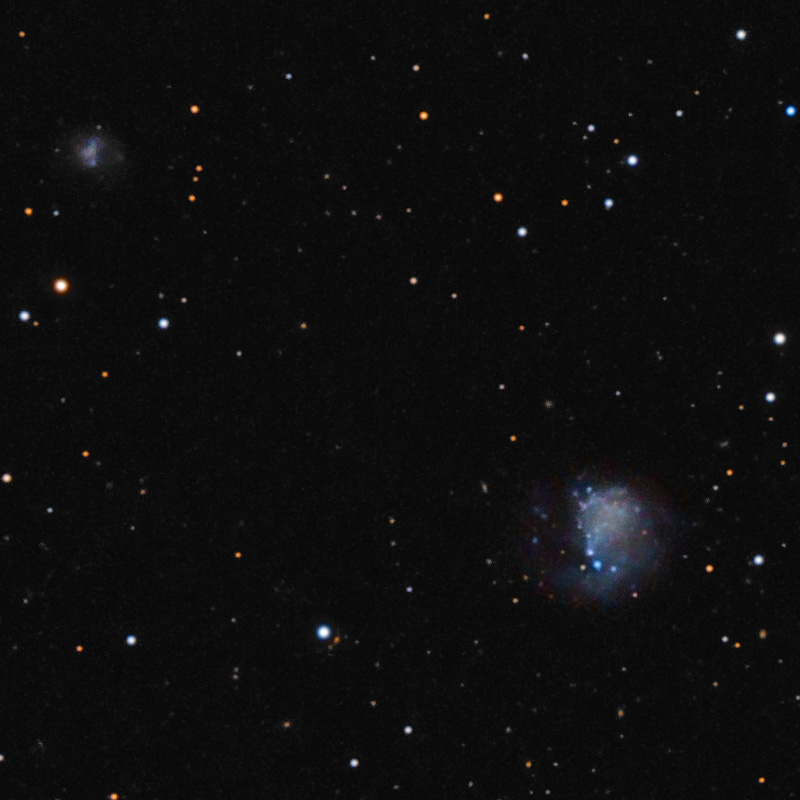 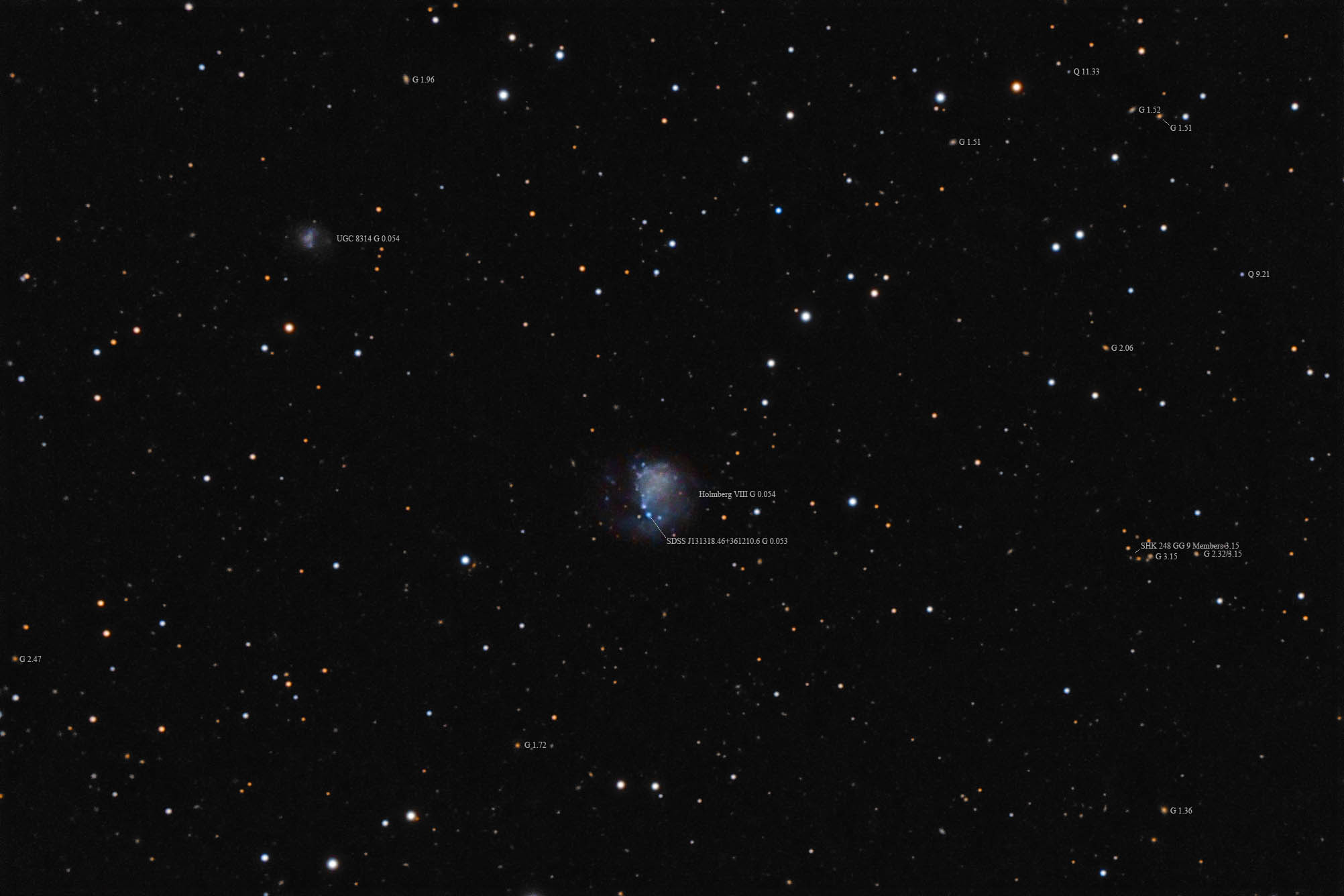