Erik Holmberg (1908-2000) was a Swedish astronomer who studied galaxies. In fact, he was the driving force behind the UGC galaxy catalog. Oddly 8 of the galaxies in that catalog also are 8 of the 9 galaxies in his Holmberg catalog of galaxies. Why these 8 and no others I\'ve not determined. If anyone knows please let me know.

Of the 9, 5 of them are in Ursa Major. Holmberg III is one of the exceptions though only barely being only a degree north of Ursa Major in the southeastern corner of Camelopardalis less than a degree west of Draco. It is UGC 8303 in his more famous catalog. I should note that while the UGC was all his idea and he verified everything in it, he allowed it to be published under only the name of his student that did most of the grunt work. His study of galaxy interactions was done long before computers yet he discovered some of the major principles of galaxy interaction and a few that turned out wrong once computers could crunch the numbers though he acknowledged those areas as weak due to the lack of being able to crunch enough data. One of his major finds in the 1940\'s was that most of the tidal distortion happened after closest approach rather than before. Galaxies could look very normal right up to and through closest approach only to be badly torn apart after this time.

But as to why Holmberg III in this image made his list I don\'t know. One of his 9, Holmberg II made Arp\'s atlas of peculiar galaxies (#268). Many others are irregular dwarf galaxies which too are very peculiar looking but that\'s the case with nearly all irregular dwarf galaxies. Then there\'s Holmberg III which is a very normal looking spiral that doesn\'t seem to fit the other 8 at all other than it is of very low surface brightness and rather blue. The obvious traits of all 9. But there are innumerable low surface brightness blue galaxies, many nearby, like his 9 that aren\'t on his list. Of the 9 I can image 8 (VI is too low declination and not all interesting looking). I only have Holmberg yet to do.

There\'s very little information available on the field. Only two other galaxies in the image have redshift data. That shows the three are not related to each other in any way. While the center of the poor Abell 762 galaxy cluster is located just below and left of UGC 04883 in the upper left corner, I can\'t identify any galaxy in the frame that may be part of the group which has no size data and contains less than 30 members. Its distance is listed at 1.69 million light-years which doesn\'t match anything known in the image. Some rather reddened galaxies are in the area which might be part of the cluster. I just don\'t have enough information to say. CGCG 332-036 below Holmberg III seems to have a plume to the east where there\'s a small compact red galaxy. Are the two interacting? Probably not but no way to know with so little information.

One asteroid, (208879) 2002 TF58 did manage to appear in the image. With the luminance frames taken at two different times due to clouds in the middle, right at the meridian, unfortunately, its trail appears in two parts. Color data was taken a different night so there\'s no color trail for it as it was well out of frame at the time.

The GALEX (GALaxy Evolution eXplorer) satellite reported several UvES objects in the image which could be quasars but without redshift data, there\'s no way to know. I didn\'t bother to label them as they look exactly the same as the many blue stars in the image. 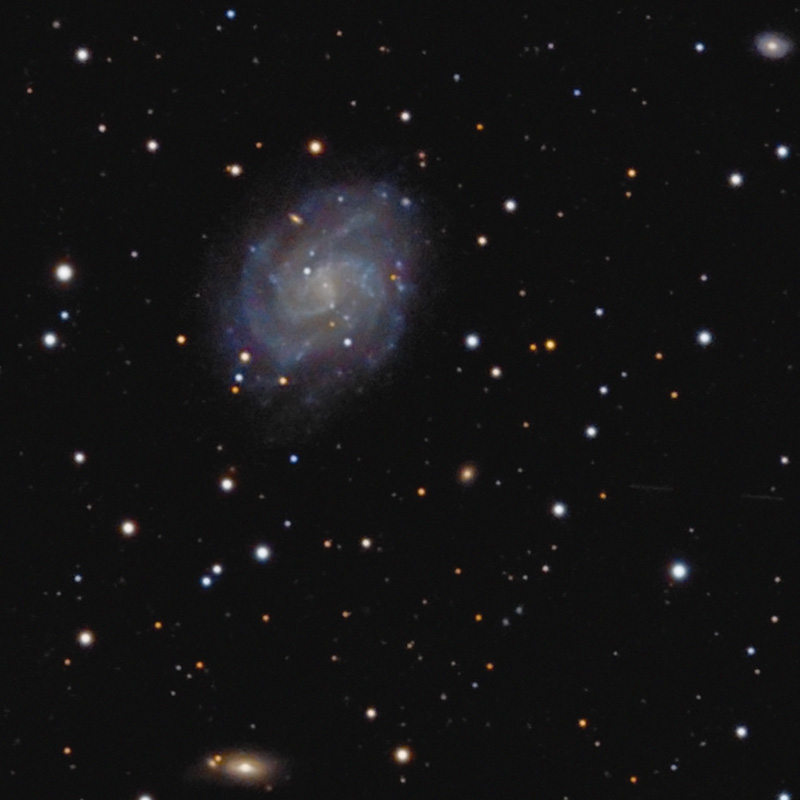 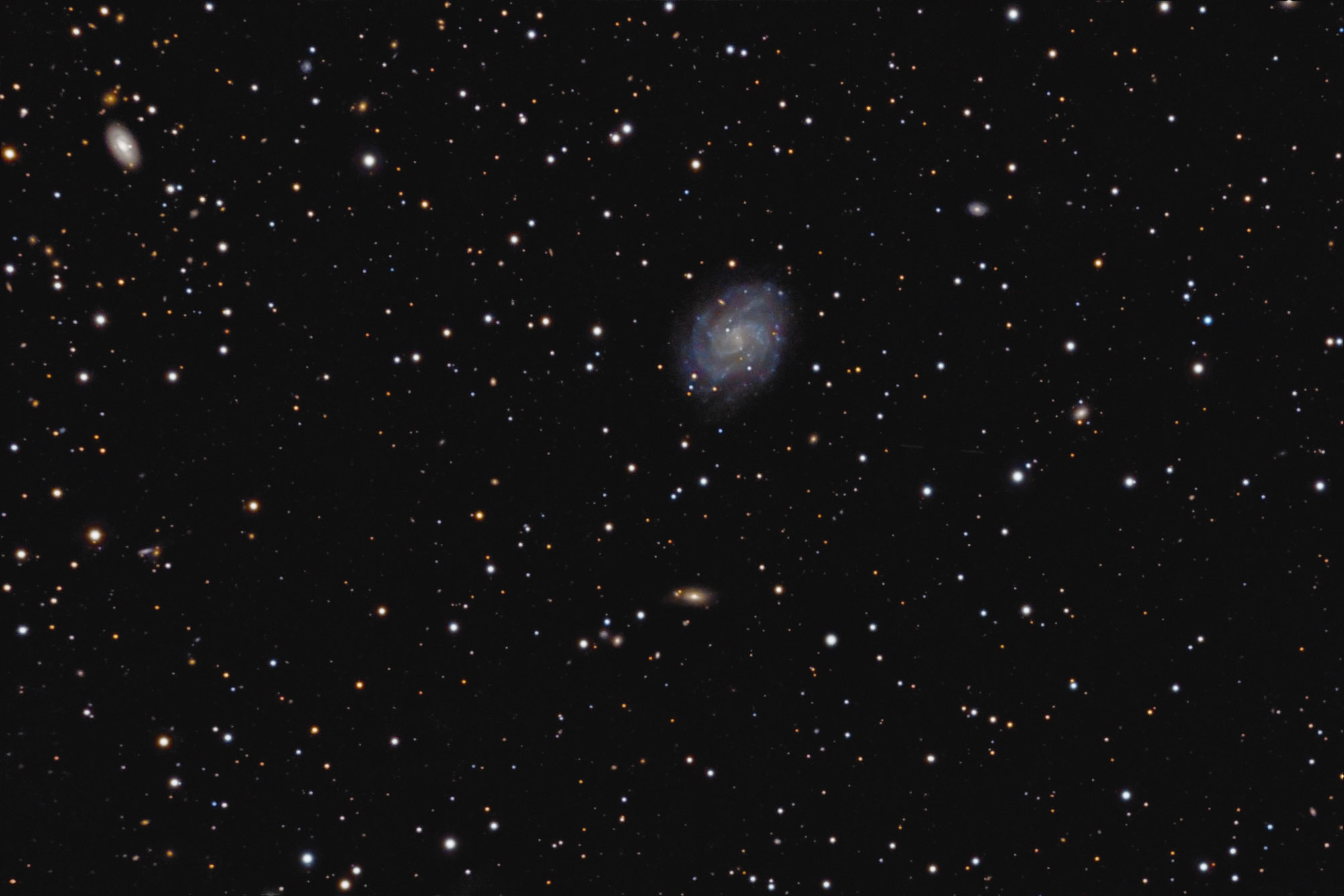 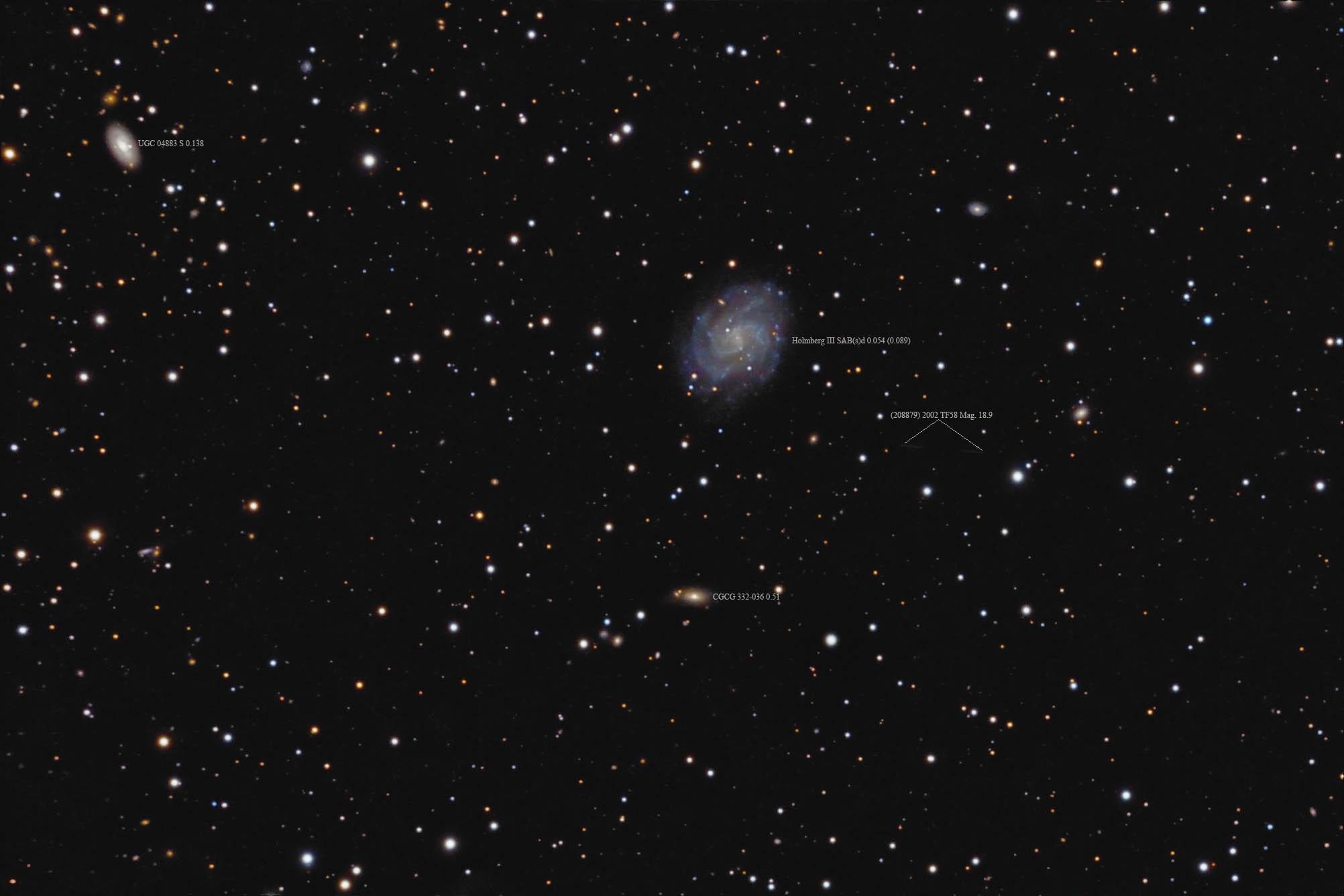