The galaxy is of low surface brightness so made the DDO catalog of such galaxies as entry DDO 185. NED classes it as IB(s)m. Most sources consider it a dwarf galaxy. It is very blue so contains a lot of relatively new stars. A possible indication of interaction with another galaxy in the recent past. I\'ll pick M101 as the likely culprit. The galaxy has no obvious nucleus that I can see. Though there is a very minor condensation toward the middle of the galaxy just down from the northern, rather bright amorphous region that might be a core. Radio observations indicate it is likely a disk galaxy tilted rather close to edge on. Apparently, its star formation has used up most of its dust with the portion not turned to stars being ejected by the interaction. At least that\'s one way to interpret this galaxy.

For some reason, redshift data is available for only parts of my image. Much of the lower left has no redshift information and other regions have very little. So the annotated image appears rather odd with those blank areas. While some faint fuzzies around 86 Ursa Major at the lower right were lost in processing out the halo (see below) I was surprised that all with redshift data survived surprisingly unhurt including one that is listed as fainter than 21st magnitude and 5 billion light-years distant. Apparently, my technique worked better than I thought except for exceeding faint fuzzies.

This is another object in which I collected the luminance on a night of not awful seeing but the color data was collected on a night with poor seeing. I\'d hoped the color data would have been usable but it seems to be only barely usable. Seeing varied so much the stars took on rather bloated and slightly randomly distorted shapes that were different on every sub. This caused some color flare issues when a flare was especially strong. A problem I\'ve been fighting thanks to the horrid imaging skies we\'ve been having. Also, the bright star to the lower right is 86 Ursa Majoris, a 5.7 magnitude A0V star. It created a bad reflection that covered a good quarter of the image. These apparently come from the corrector plate. I spent a lot of time removing it. In doing so some of the faint objects in its area suffered. My normal methods of subtracting the halo out by using a halo made by aligning the halos of several similar stars then combining with data rejection so the other stars all vanish leaving just the halo didn\'t work. For reasons I don\'t understand the halo contained a partial image of the internal baffle in the scope. Something I couldn\'t recreate. So I had to do the job manually. I\'m not any good at that. I had to call in my wife who has a bit more artistic ability to help. Now she expects I owe her big time in chores for her. It might have been easier to have retaken it with the star out of the image and the galaxy low in the frame. But with the rotten weather that might never happen. 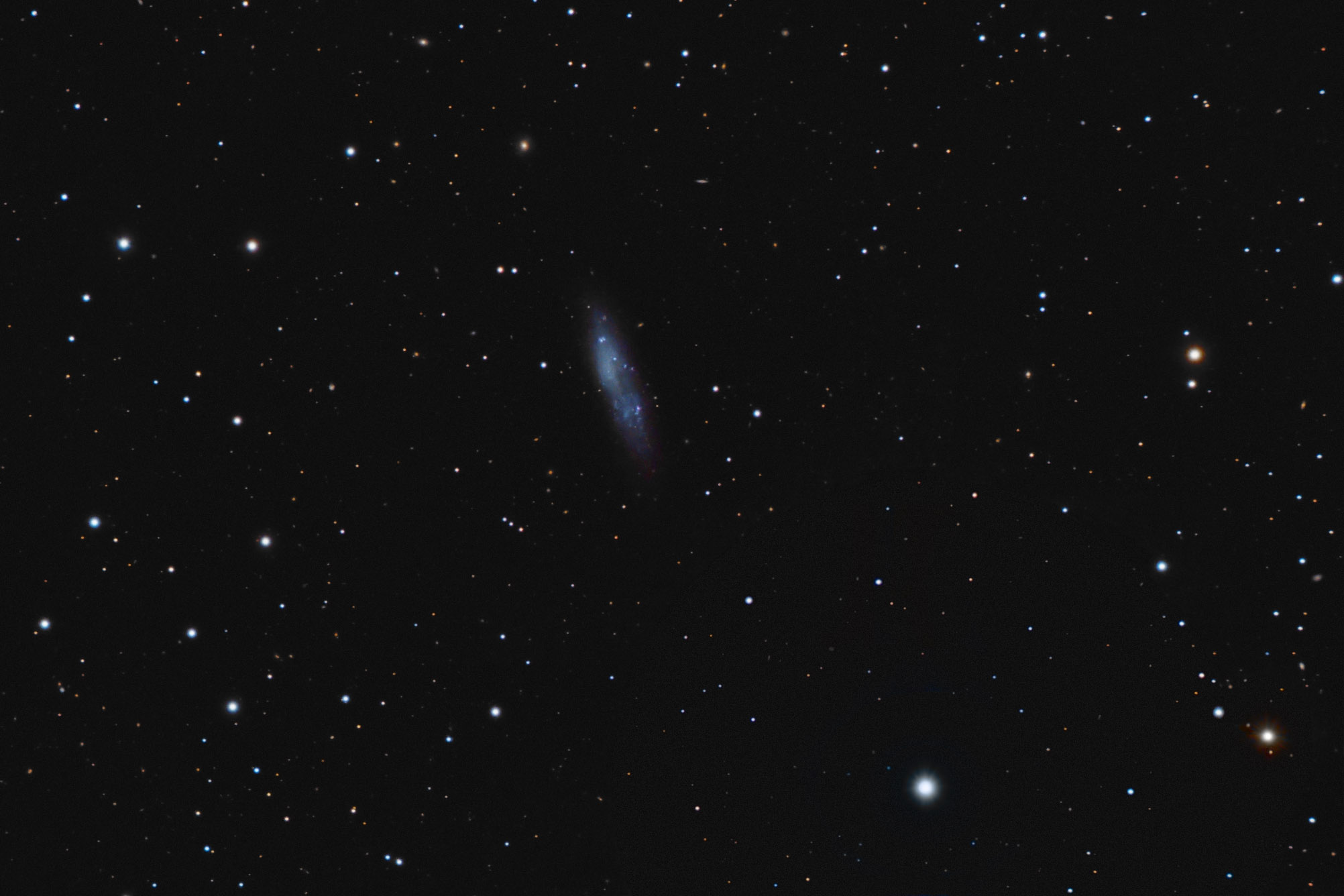 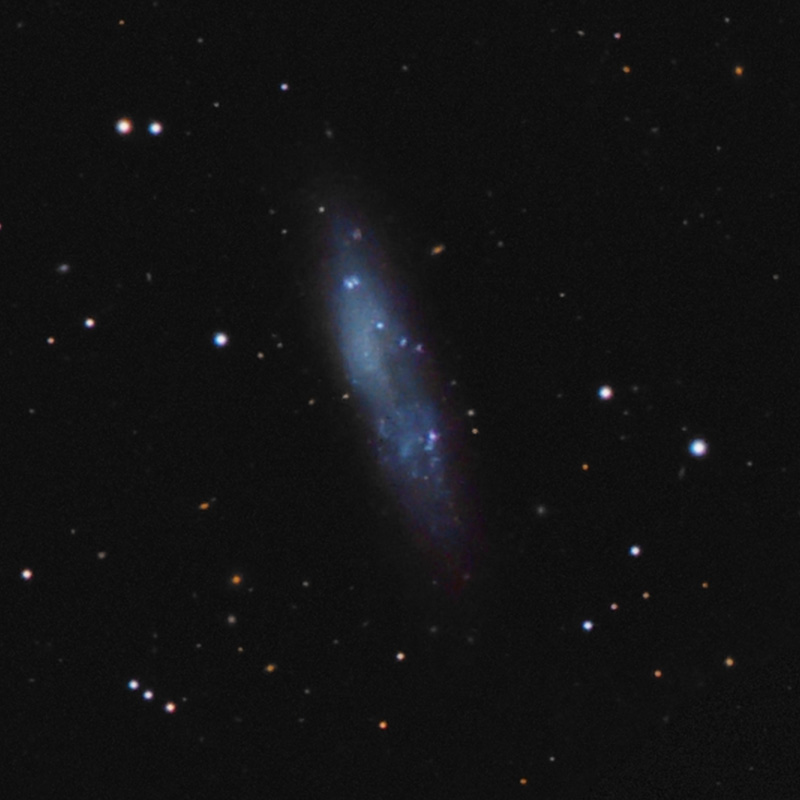 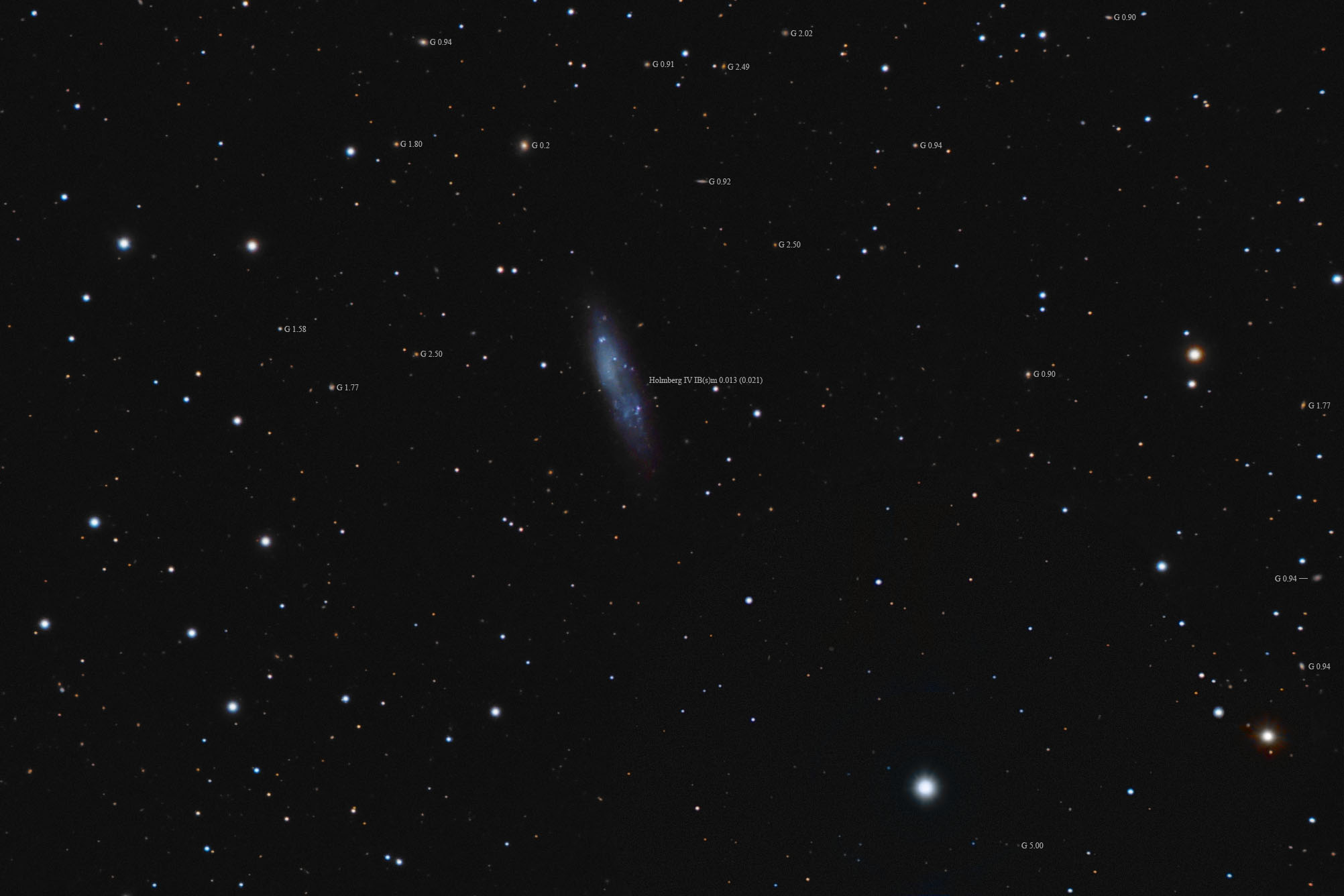