IC 65 is a somewhat non-symmetrical spiral about 110 million light-years distant in the constellation of Andromeda north of the famous Andromeda galaxy, M31. It is classed as SAB(s)bc. Is it naturally unsymmetrical or is this the result of an encounter with another galaxy? It is a member of a very small, sparse group known as the IC 65 group. So sparse I can identify only one other member of the group in my image. That is [VH2008] J0101+4744. A very small dwarf galaxy to the northeast. Further southeast is [VH2008] J0100+4734 which I really wanted to know more about as it seems to consist of several condensations. Unfortunately, NED has no distance data and only an approximate position making it impossible to tell if it refers to all the parts or just some or even one of them. There is a larger member of the group out of the picture several minutes of arc above the top of my field. Not knowing it at the time I centered on IC 65 so missed it. The only other galaxy with distance data is MCG +08-03-003, the obvious elliptical galaxy to the northwest of IC 65. It, however, is much more distant at 630 million light-years. I found little on the field.

Many other galaxies are visible in the image. Only 10 are even listed at NED. I listed them all in the annotated image. Most had no distance information so are just listed by catalog name. [VH2008] is the Vennik, Hopp catalog. The 4C object is from the Fourth Cambridge Radio Catalogue indicating this galaxy was first found by its strong radio emission. It is listed in the 1RXS (ROSAT All-Sky Survey Bright Source Catalog of X-ray sources) and the 2MASX IR object catalog. It covers a rather wide spectrum. NED, however, doesn\'t list it in an ultra-violet catalog. The vast majority of galaxies in the image are apparently anonymous. I hope their inhabitants aren\'t offended by that slight.

I had a very nasty reflection to the east of IC 65 cause unknown. I get these sort of triangular shaped \"features\" every once in a while. If I see them in the first frame I move the field a couple minutes and they vanish. When the main object is off center a bit that is likely why. In this case, the image was taken automatically so I wasn\'t available and didn\'t find it until I went to process the image. I cloned it out. But you will note there is quite a bit of scattered background light. Some of the brightest to the east where I removed the reflection. Since the glow appeared on all sides of the reflection I cloned it in rather than leaving the area as black as areas without the glow. What I don\'t know is if this is real or a bigger reflection issue. I tried enhancing the POSS plates but no hint of it turned up. Though areas of Andromeda do have rather ill-defined galactic cirrus. Not being an expert on galactic cirrus I don\'t know if that is what I picked up or not. In case it is real I left it in. I need to retake the field with a different camera pointing to verify which is the case. Normally I\'d trust it to be real but since it could be related to the obvious reflection issue I am not as confident that it is real. 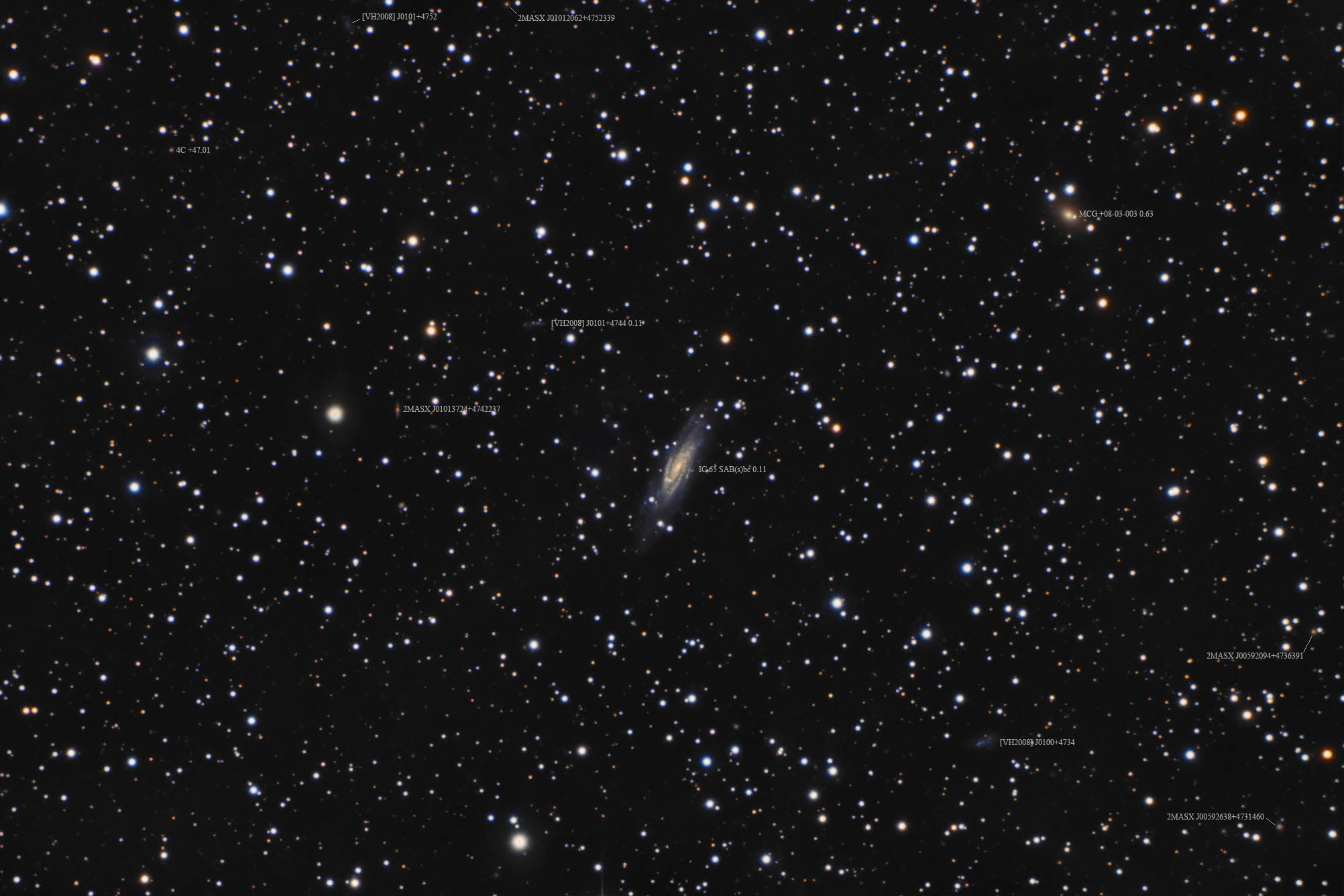 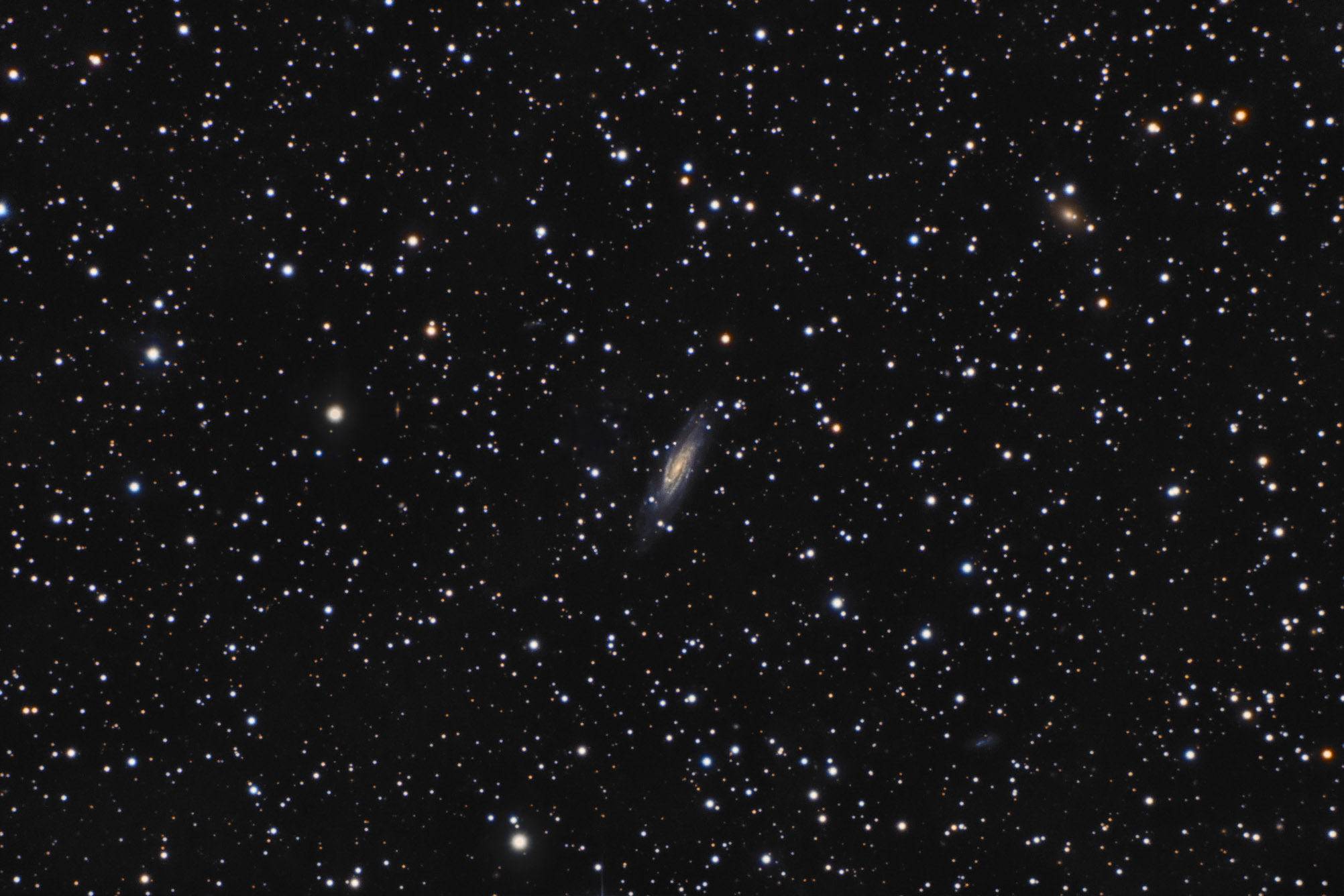