IC 277 is a galaxy with a large plume suggested to me by Sakib Rasool. It is about 120 million light-years distant in the constellation of Cetus. Why it has such a huge plume is the issue. It might be due to a nearby galaxy. The one to the north is often cited as being related. Problem is there\'s no redshift info on it and it doesn\'t appear distorted. Usually, such a small galaxy would be torn apart by the far larger one not the other way around. That\'s the problem with the others nearby as well. Either the culprit has moved on or this is the result of a merger. I find nothing in the literature to help. It was discovered by Stephane Javelle on January 6, 1894.

While the Sloan survey has images of this area, none of the data is in NED. That left only two other objects in the field for which NED had distance data. I wasn\'t going to prepare an annotated image but then looked at these two. They are both listed as quasars. One of which is so different from what I normally think of as being a quasar I decided it was worth covering. This is [HB89] 0257+024/US3498. NED lists it as being a galaxy, a quasar, a blue star and a UvES object. Wow, what an overachiever this guy is. The distance listed is only 1.45 billion light-years. Super close for a quasar. In my image, it looks like a quite normal spherical reddish galaxy. It looks the same on the Sloan image. Yet this is what a note at NED has to say about it:

\"The host of this radio-quiet quasar is dominated by a disc component with a best-fitting scalelength of r_1/2_ = 10 kpc (Fig. 1n). The model-subtracted image in Fig. A14 shows a ring of emission at ~4 arcsec radius. Also revealed is substantial residual flux in the inner ~2 arcsec where the host galaxy is bulge-dominated. This feature can also be clearly seen in the luminosity profile shown in Fig. 1(n). As a result of the central bulge, the variable-beta model chooses a substantially lower value of beta (0.75), and offers a significantly better {chi}^2^ fit than a pure exponential disc. Nevertheless, this transpires to be the most disc-dominated host galaxy in the quasar sample observed to date.\"

The full paper can be seen at: http://adsabs.harvard.edu/cgi-bin/bib_query?1999MNRAS.308..377M though I\'ve reproduced about all it has on this particular one. Since it was done with HST data I did look that up and have included a quick and dirty process of the mono HST image of this galaxy. Shows what appears to be a Sa tightly wound spiral with a very bright core compared to the disk. Arms are of very low contrast as the image is done in the red region of the spectrum 675nm so would likely suppress the disk region and lower arm contrast. Note the really strange galaxy to the northwest in the HST image. Seems strangeness is rather common if you look deep enough.

The other quasar is at a more common distance for a quasar. No galaxy is seen, just a very blue star-like object. NED lists 4 objects as UvES from the US catalog (USher Faint Blue Stars). Often these turn out to be quasars. Until the Sloan data is published there\'s no way to tell if they are just blue stars or quasars. I\'ve labeled them on the annotated image. As usual, if no distance data is available I use a question mark where it would normally appear.

I saw a blue frame was lost to clouds and replaced it but missed that a green one was also lost to clouds so had to process it with one less green frame than normal. Also, I thought two luminance frames were unusable due to clouds so retook two. Turned out it was slightly better using all 6. 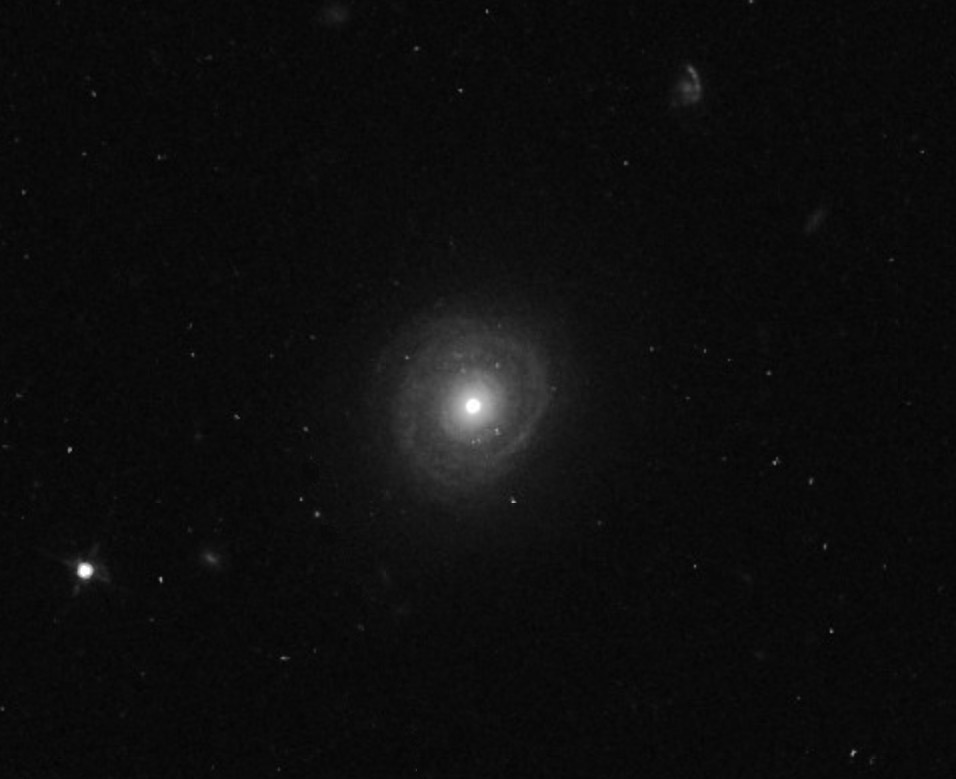 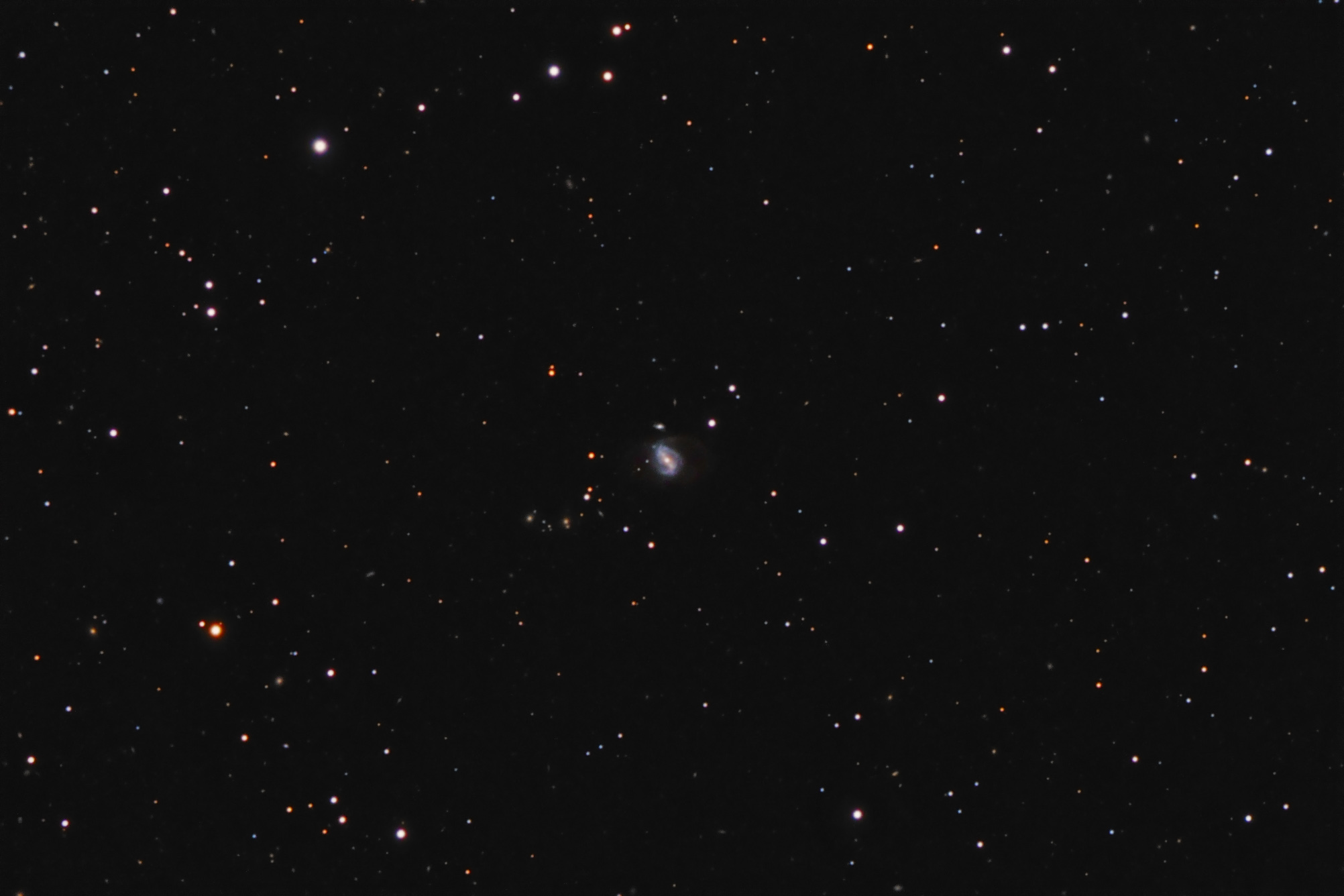 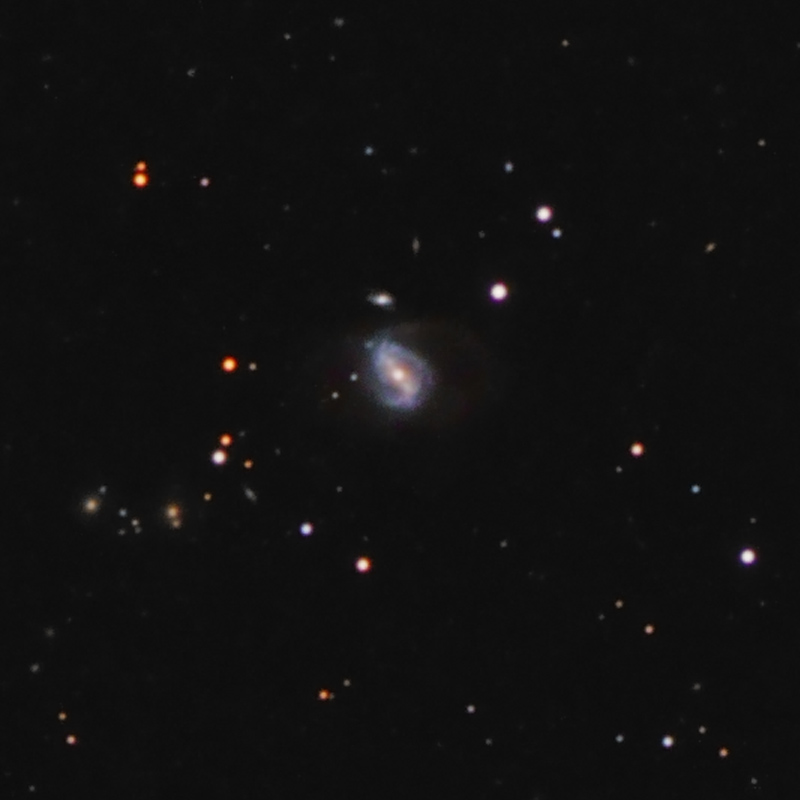