I put IC 480/2MFGC 6287 on my to-do list when I saw an amateur image of it that showed it as very blue. An edge on galaxy may be blue at the ansae but usually is quite reddened for much of its length so this was highly unusual. Looking at the POSS images I thought I saw the same. But after processing, I find it is quite typical of flat edge on galaxies so wasn\'t blue after all. Still, it is a flat galaxy though not flat enough to make it into the Flat Galaxy Catalog but is in the 2 micron version which is a bit more lax on entrance requirements. Also, its dust lane is not straight as is typically seen and there are several bright blobs seen against the edge on galaxy. Several are listed at NED as being separate galaxies though I\'m quite sure they are just star clouds in the galaxy as their redshift is very similar to IC 480. Though seeing such clouds is rare in edge on galaxies. It is classified by NED as Sbc and Sbc? by Seligman. It was discovered by Stephane Javelle on March 18, 1892. It is a rather large spiral at about 125,000 light-years in diameter assuming the redshift distance of 220 million light-years.

The field turns out to be rather interesting. It is located in northeastern Gemini not far, 2.5 degrees, from Pollux. To its southwest is the radio galaxy AGC 172071 also at a redshift of 220 million light-years. It appears to be a strange dwarf galaxy. NED\'s only catalog entry for it is from a radio catalog. None of the visual catalogs seem to have an entry for it.

To the northeast of IC 480 is another highly strange looking galaxy, PGC 22209 at 450 million light-years. It appears rather disrupted having various parts, dim and rather bright. Tucked in between two bright regions is what NED classifies as another galaxy, ASK 180095.0. It is shown to be 500 million light-years distant. A bit too much difference to be just part of the galaxy so likely is a separate galaxy behind it. It is a tiny spherical object. Nearby to the east PGC 022221 is a two armed spiral in which the southern arm is much broader and brighter than the northern one. It is some 830 million light-years distant. It is listed as an SC galaxy by NED. To its east is the S0 galaxy PGC 022227 which has what appears to be a rather obvious dust lane on its eastern side.

To the southeast of IC 480 is small (in appearance) edge on ASK 204215.0. If brighter it likely would make one or both of the flat galaxy catalogs but is too faint for either. It is small only because of its distance of 1.17 billion light-years. It is actually larger than IC 480 at 150,000 light-years in size.

The field contains several quasars (Q) and quasar candidates (QC). The candidates have only a photometric redshift which can sometimes be incorrect. NED lists dozens in the field. I\'ve identified only those NED seems to feel are likely valid but still calls them candidates until more data is in.

Two asteroids were caught in the lower part of the image. See the annotated image for details.

Transparency was a bit better than I\'ve had, still below what used to be normal, which allowed me to pick up some galaxies out as far as 4 and 5 billion light-years. They are marked in the annotated image. 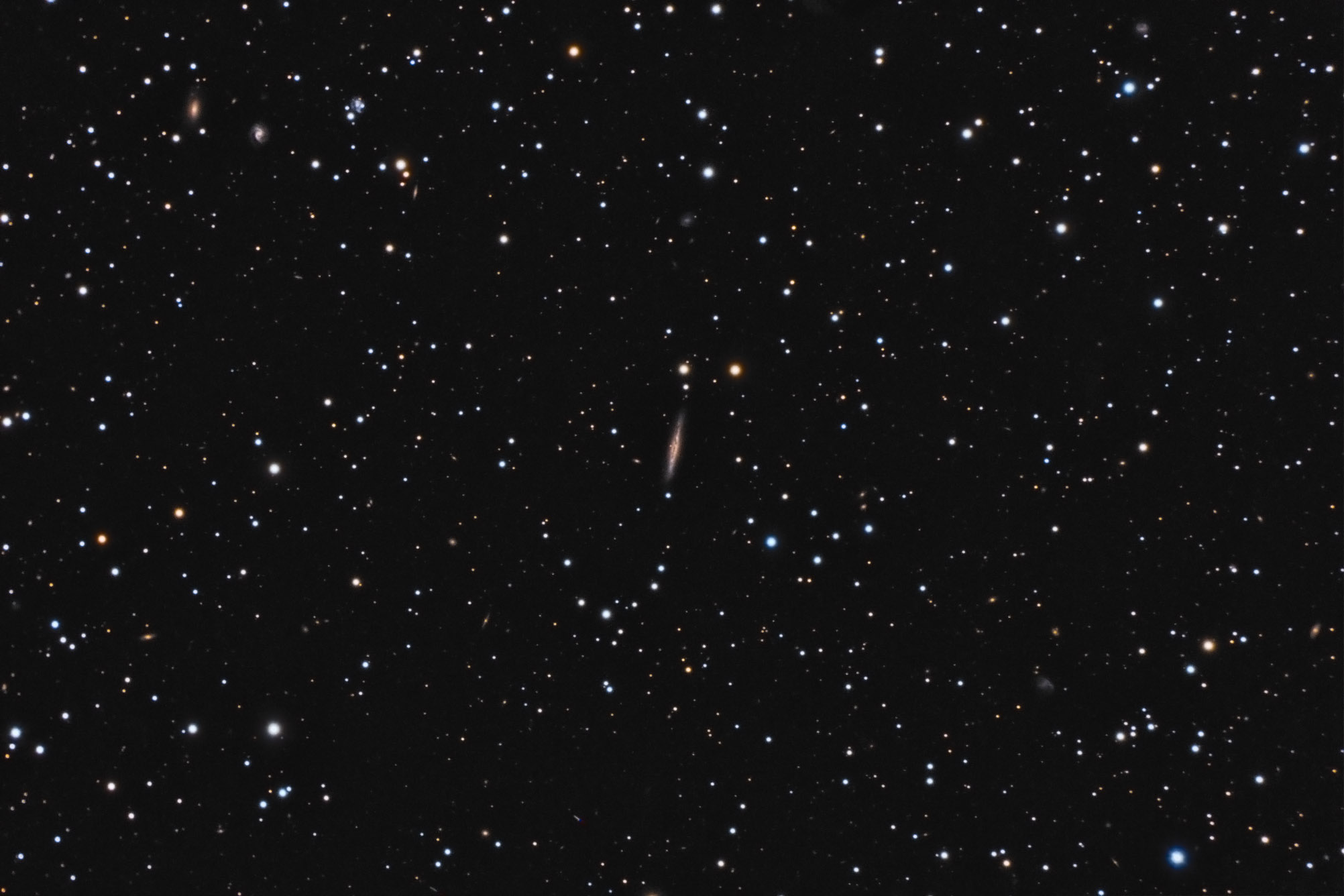 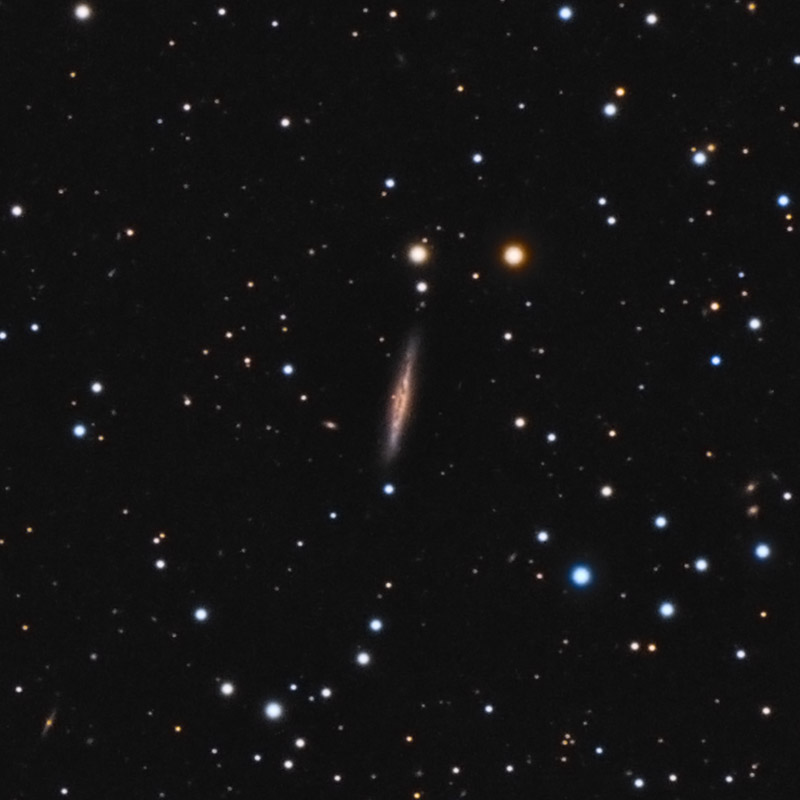 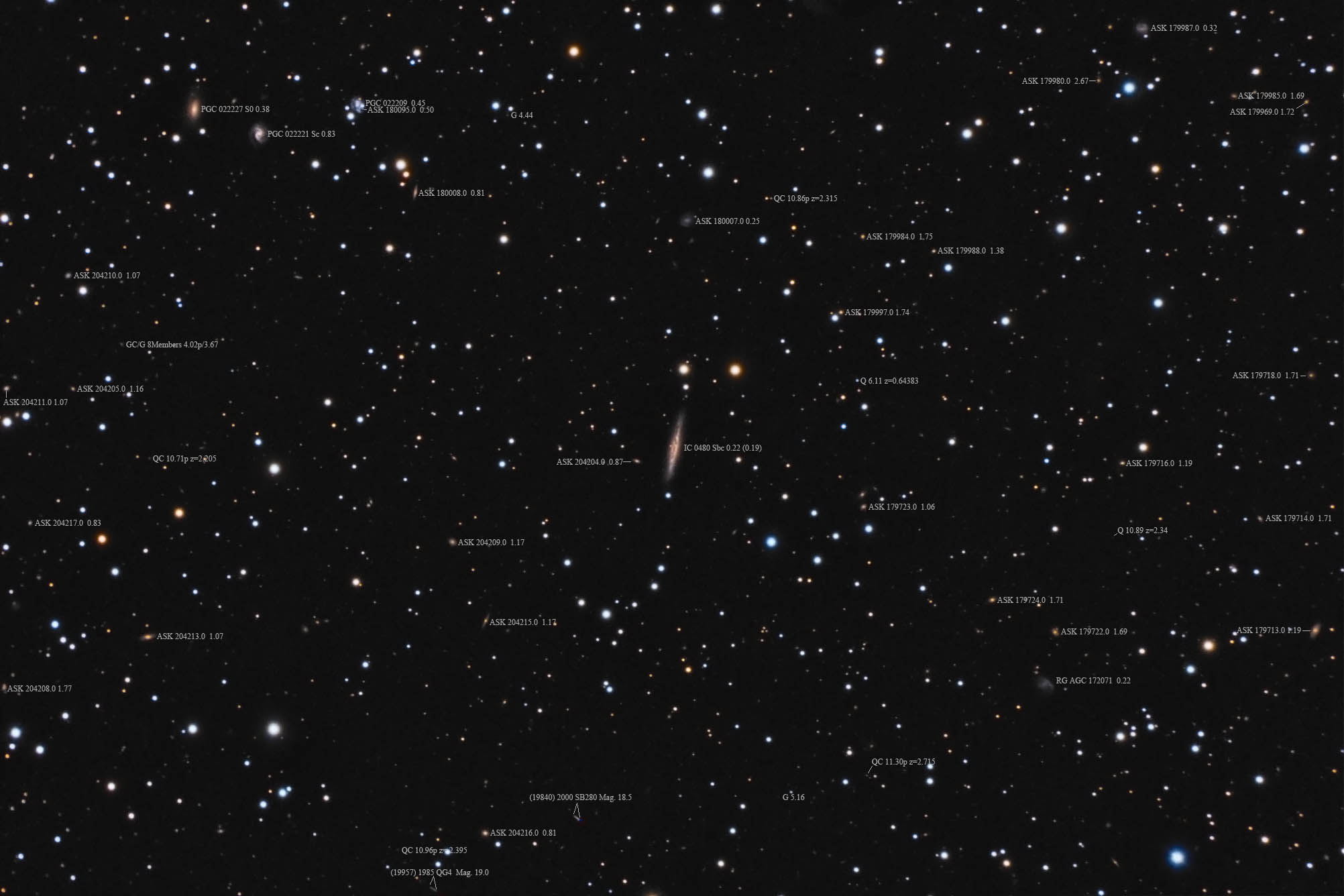