My original object of interest was IC 527 due to an entry in the UGC stating \"Smooth faint disk, no spiral pattern.\" Yet the POSS image showed a very obvious spiral pattern and hints of fainter outer arms disconnected from the disk. When I took my framing image interesting galaxies were near the western edge so I move the field west to pick them up. Started the imaging run and went to bed. I went to process it weeks later and found I was in trouble. One totally useless, one weak and the two \"good\" ones were weaker than normal. Conditions had to have gone south soon after I started. Yet the color frames were all good. Since I didn\'t see this until too late to retake it I decided to make a pseudo color image from the three sort of usable L frames and all the RGB frames. Thus it loses a good magnitude or more and is noisy but at least I had something to work with. It\'s back on the to-do list for next year as it is full of interacting galaxies. The field is located in southeastern Lynx. Edit: Somehow I\'ve never gotten back to this field. Also, this illustrates why I don\'t bin color as most imagers do. I\'d have lost not only depth but also resolution had I binned the color data when using it to salvage poor luminance data. Contrary to popular opinion I don\'t find I need more time for color data because of this.

It turns out IC 527 may be one of the less interesting galaxies in the field. But for its strange arm structure, it is otherwise rather normal looking. NED says it is S? with no mention of a very obvious bar. Seligman does see it and classifies it as SBc?. It was discovered by Lewis Swift on April 19, 1890. IC 527 it is about 320 to 330 million light-years distant by redshift.

To the northwest is PGC 025786, a highly disturbed Sb spiral with one arm pulled out to the south and a faint plume to the southeast.

Well to the west is normal NGC 2759 classed as S0-: by NED and E/S0 by Seligman. It has a redshift that puts it slightly further away than the other two but I suspect this is more due to its velocity in the group rather than a real distance difference. It was discovered by William Herschel on March 30, 1787. It isn\'t in either Herschel 400 observing program.

Heading south from NGC 2759 we come to PGC 025734 listed by NED as SB(s)b pec. It certainly is peculiar all right. It has a long straight plume to the southwest that suddenly broadens out and curves back toward the galaxy before fading away along the east side of the galaxy. This curving part carries its own galaxy designation at NED. See the annotated image for details. This galaxy is also 320 million light-years distant. Is it messed up because it interacted with PGC 025786? The plume seems to point back to this galaxy and it too is disturbed.

Quite a few other galaxies in the image are also about 320 million light-years distant indicating this is a rather large group but I never found any galaxy cluster or group that included them all. I didn\'t check outside the bounds of the image, however.

Going back east from PGC 025734 brings us to the double galaxy PGC 025760. These two are obviously interacting with large plumes coming from the eastern galaxy. Only the western member, ASK 206485.0 has a redshift measurement at NED. That puts it some 1.35 billion light-years distant. How I wish this pair was much closer. It likely would be a spectacular crash scene.

Go south and a bit west from PGC 025760 and an even more distant pair is seen. Only the eastern member has any redshift data. NED puts it, ASK 267925.0, at some 2.15 billion light-years. I assume the two are interacting since they appear to be sharing a common halo of stars. Unfortunately, due to conditions, this is hard to see. I checked the Sloan image with confirms the shared halo.

In the upper right corner is the flat galaxy FGC 841 which NED lists as an Sc spiral with a possible DANS core. What is that you ask? I had to look it up. It stands for Dwarf Amorphous Nuclear Starburst--Introduced by Salzer et al. ([1989]), they show very similar spectroscopic properties to SBN objects, but with alpha luminosities lower than StarBurst Nuclear galaxies. 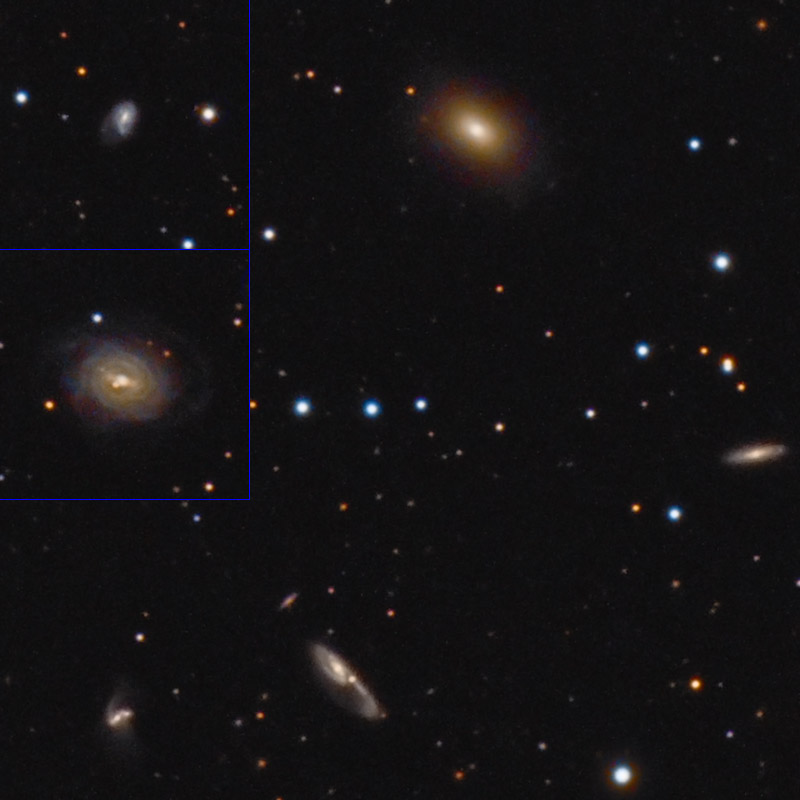 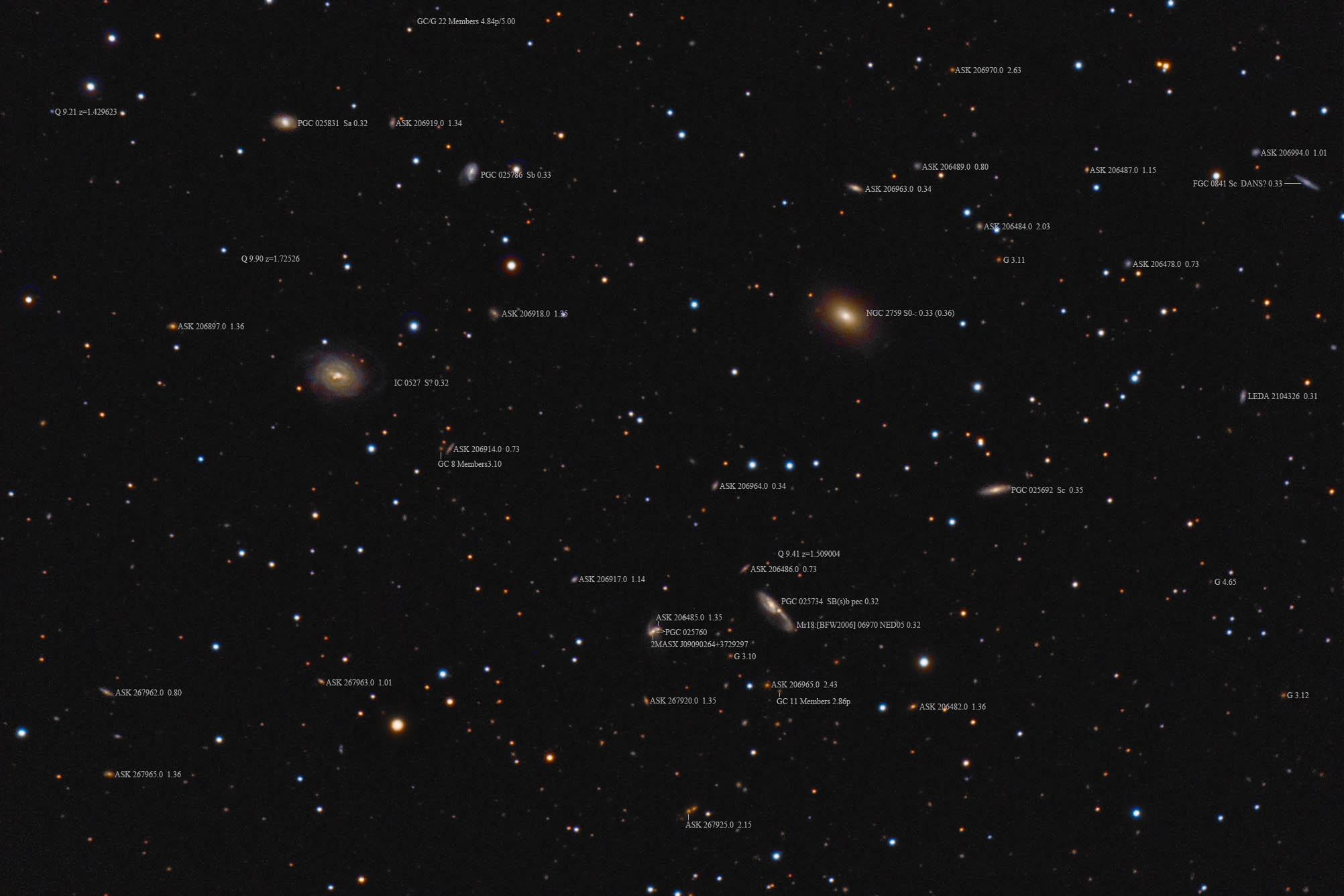 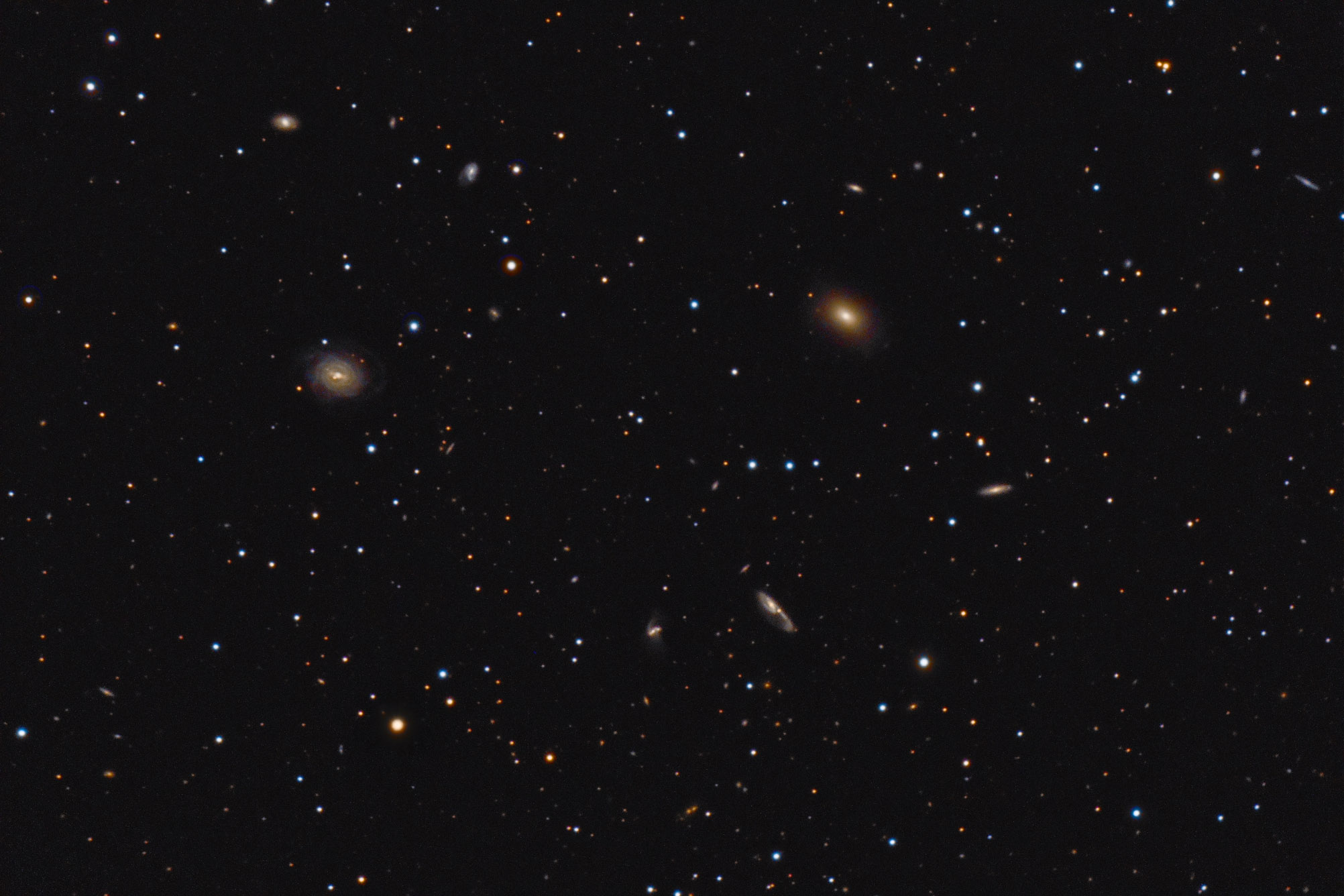