This field is located in western Leo about 2.5 degrees north of the ecliptic. Thus you might expect several asteroids in the image. I did. Only one 20th magnitude one showed up. The two galaxies in the image are about 280 to 290 million light-years distant. Assuming they are at about the same distance their angular separation is about 1.5 million light-years making them closer than we are to M31. The difference is likely greater though both seem somewhat disturbed.

My reason for taking this field was the flat galaxy FGC 0945 more commonly known as IC 0565. There\'s no issue with the FGC catalog entry but it appears only it was seen and entered into the IC catalog. Later its elliptical companion was included in some IC catalogs but not all. Also, NED has the flat galaxy cataloged as Sbc one place and on the same page says it is Scd. I found it only as Sbc except for this NED entry.

There is some question in some places as to the elliptical companion saying it may or may not be a true companion. Though most note the warped nature of the flat galaxy and say it may be due to the elliptical galaxy. When was the redshift of these two determined. Today they have very similar redshifts which would indicate they are likely interacting.

The other galaxy is hiding behind a rather bright star. It is UGC 5234. It is a rather low surface brightness galaxy making it difficult for visual observers explaining how it missed being in the IC catalog. Its arm structure is a bit odd indicating it may be partly due to interaction with some other galaxy. Was it IC 0565? I found nothing much on this galaxy.

IC 0565 was discovered by Stephane Javelle on December 16, 1893. The other two escaped his eyepiece it would seem.

In annotating this field I ran into some very odd issues with NED\'s database. One of the strangest concerns a rather faint edge on galaxy north of IC 0565. NED shows two entries for it at slightly different positions but well within it bright outline. One says it is magnitude 22.6 and smaller than any star disk in the Sloan image of this field but gives a distance similar to IC 565 and UGC 5234. Something that small at that magnitude can\'t be seen in the Sloan image thanks to the much brighter galaxy. The other entry carries no redshift, a size that fits my image and a magnitude of 17.6, also about right. Figuring some mixup I assigned the redshift to the galaxy not the invisible point source that makes no sense. Many galaxies with magnitudes easily visible in the image turned out to be much fainter. Some barely visible in the Sloan image. Others with very faint magnitudes were easily visible in both my and the Sloan image. Why the errors that could exceed 3 magnitudes I don\'t know. Yes, a larger galaxy of the same magnitude will appear fainter but in these cases that can\'t account for more than a 0.3 or so magnitude difference, not three. Knowing about the limit due to lousy transparency this night I set the cutoff for searching for things to annotate at the appropriate point but when I started finding \"bright\" galaxies being invisible and those supposedly at my limit \"big and bright\" I had to go back and lower my magnitude limit. This resulted in a lot of false entries that sucked up my time. But it also picked up many I would have missed. I hope this isn\'t going to be the norm for NED.

The one faint asteroid at magnitude 20 is near the western edge near the NW corner of the image. It was caught shortly after reverting back to normal motion after a period of retrograde motion as we passed it. As it was still finishing the loop it moves very slowly and at an angle to the northeast.

Due to the poor seeing and transparency, I didn\'t prepare a cropped image at a greater image scale than my usual 1\" per pixel as even that was too much for the night. 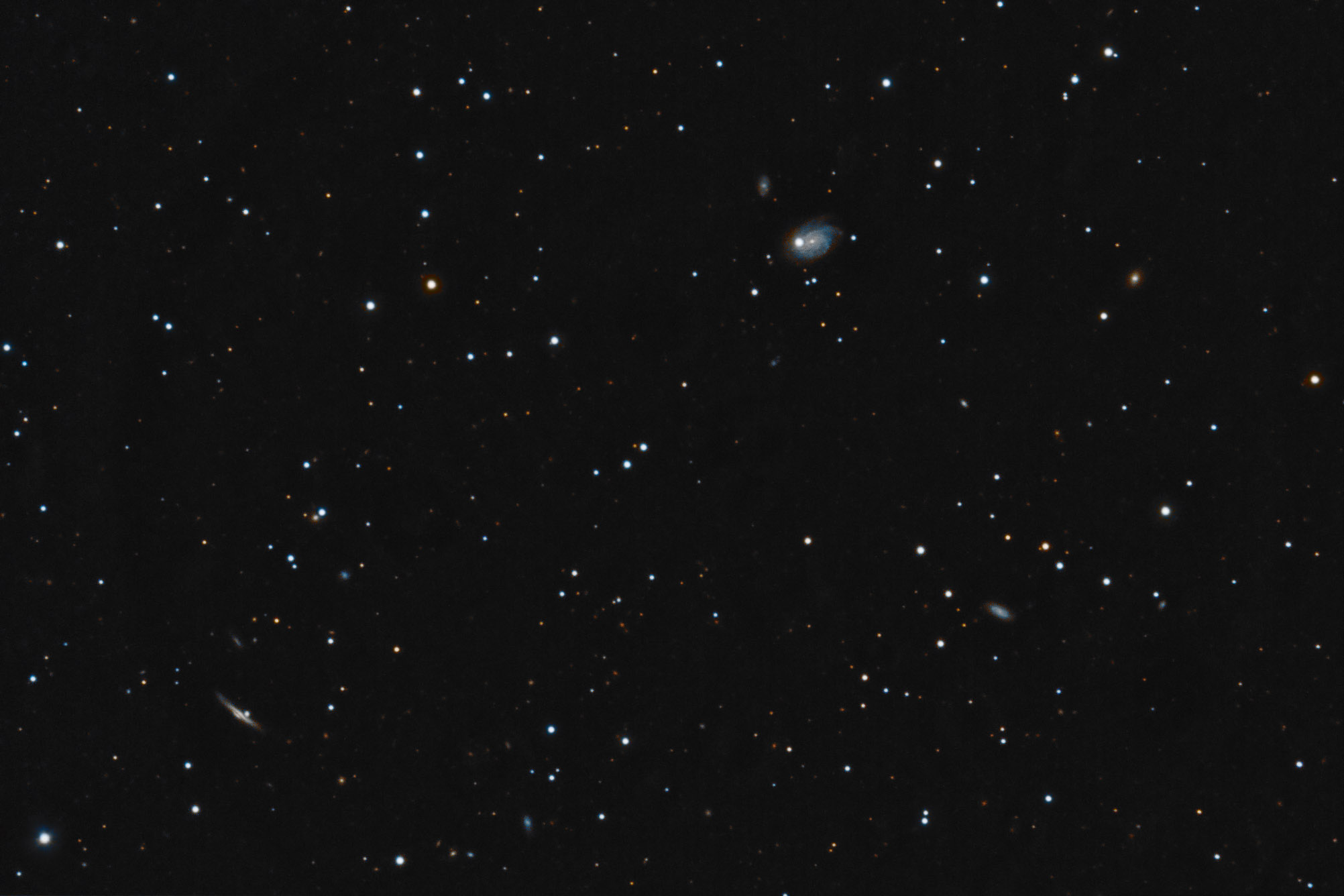 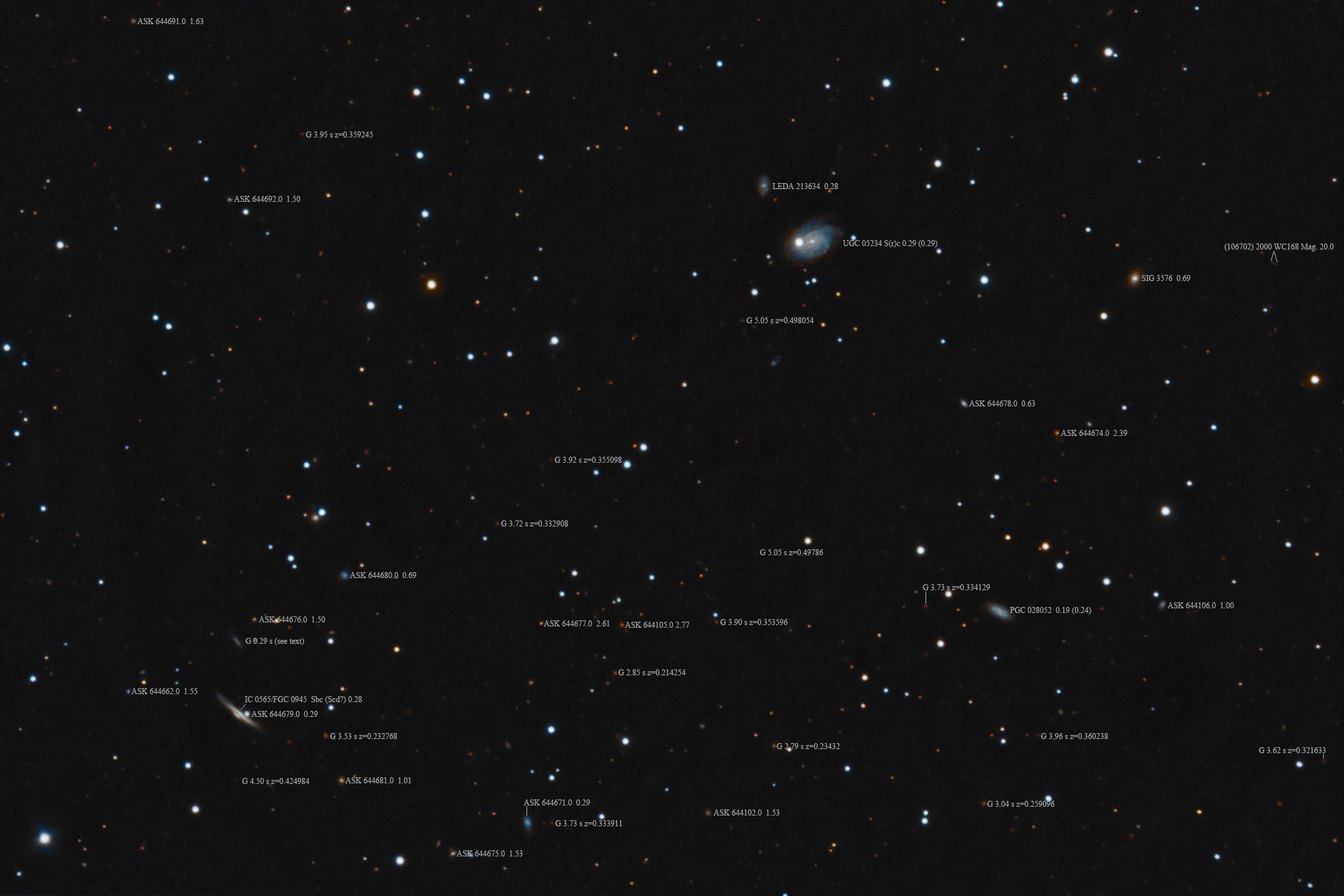