IC 658 is a strange galaxy between the rear legs of Leo the lion. It is classified as E+ pec by NED and S0/a? pec by Seligman. The pec (for peculiar) designation obviously relates to the odd eastern loop. This may trace the path of some dwarf galaxy it consumed in the recent past. Ignoring the loop the galaxy is about 90,000 light-years across, including the loop it is some 190,000 light-years across, more than doubling its size. Could ASK 270454.0 be the cause of the loop? It is about the same distance by redshift but I see no stream connecting it to IC 658. I found a total blank on this loop in the literature. Such an interesting galaxy without any interest in it, it appears. It was discovered by Stephane Javelle on April 19, 1893.

There are two other large spiral galaxies that appear to be members of IC 658\'s local group on the right side of my image, PGC 32939 and PGC 32943, both about 100,000 light-years across. Many other much smaller galaxies at their redshift are seen across the image. They are bright dwarf galaxies.

The only other major galaxy in the frame is PGC 32969 at 690 million light-years so not likely related to the IC 658 group. In angular size, it is about the same as the other two PGC galaxies but thanks to its greater distance is somewhat larger at 120,000 light-years across. It looks like a barred spiral but NED shows it as Sb rather than SBb I expected.

There are quite a few asteroids in the frame all but 5 were lost in my rather noisy skies this night. Oddly the fifth is listed by the Minor Planet Center at magnitude 20.7 which is fainter than several others that are lost in the noise. I doubt the magnitude estimate is correct so added a question mark in the annotated image.

Because conditions were poor I took 80 minutes of luminance data rather than my usual 40 minutes. Clouds prevented me from starting when I had hoped so I didn\'t get a chance to double up the color data before it moved too far west and I was fighting the light dome of a town 15 miles to the southwest of me as well as getting too low for good seeing. So fainter objects have rather weak color. Conditions got worse before the moon got in the way so I went with what I had.

FoF means the distance estimate is based on the Friend of a Friend method, likely the galaxy to the upper right of the one so marked. How accurate this is I don\'t know. I\'ve had no experience with this distance estimate. If the distance is followed by a \"p\" that means it was determined photometrically. By use of the 7 photometric filtered images by the SLOAN survey, it is possible to estimate distance. I don\'t trust these as much as spectroscopic redshift measurements so have noted when they are used, usually with rather distant galaxies. Those denoted only by a G aren\'t in any catalogs except by their position which can clutter up an image when common. So I rarely use such designations. In this image, all so marked are fainter than 20th magnitude. I\'ve included z values for objects that the look back distance is so large to be misleading. Besides the look back distance varies every time a new Hubble constants are determined while the z values remain constant. 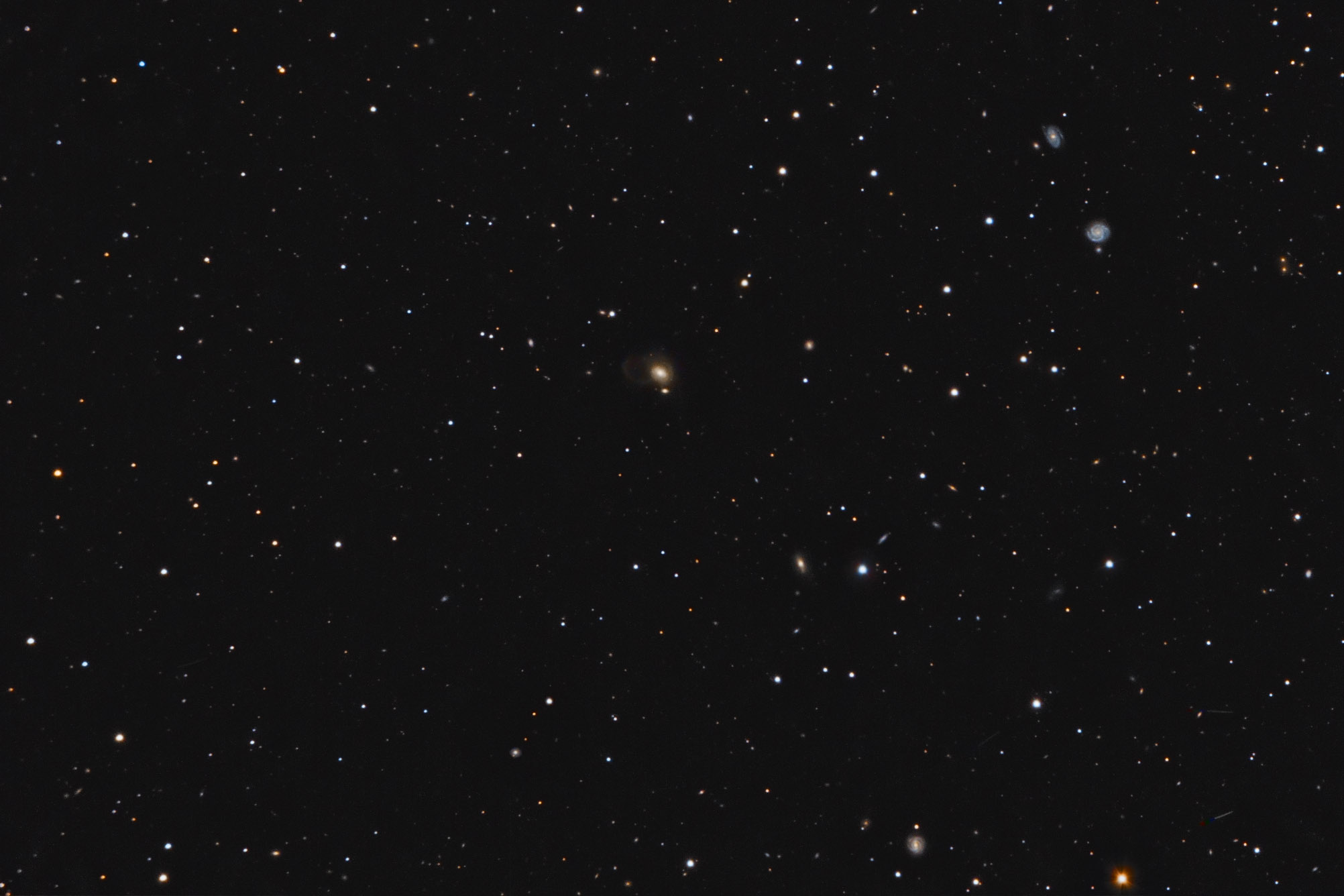 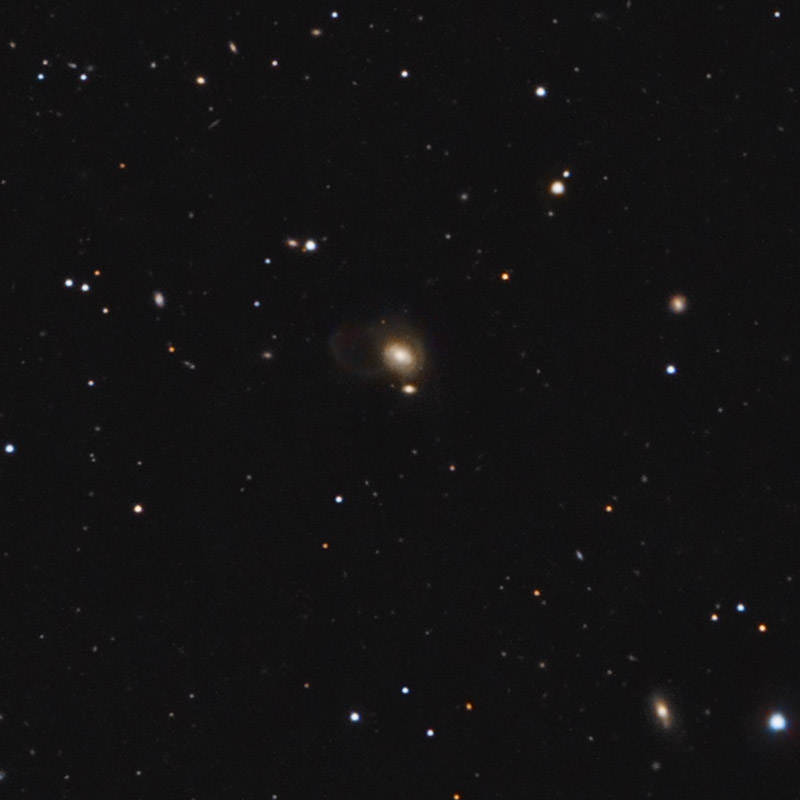 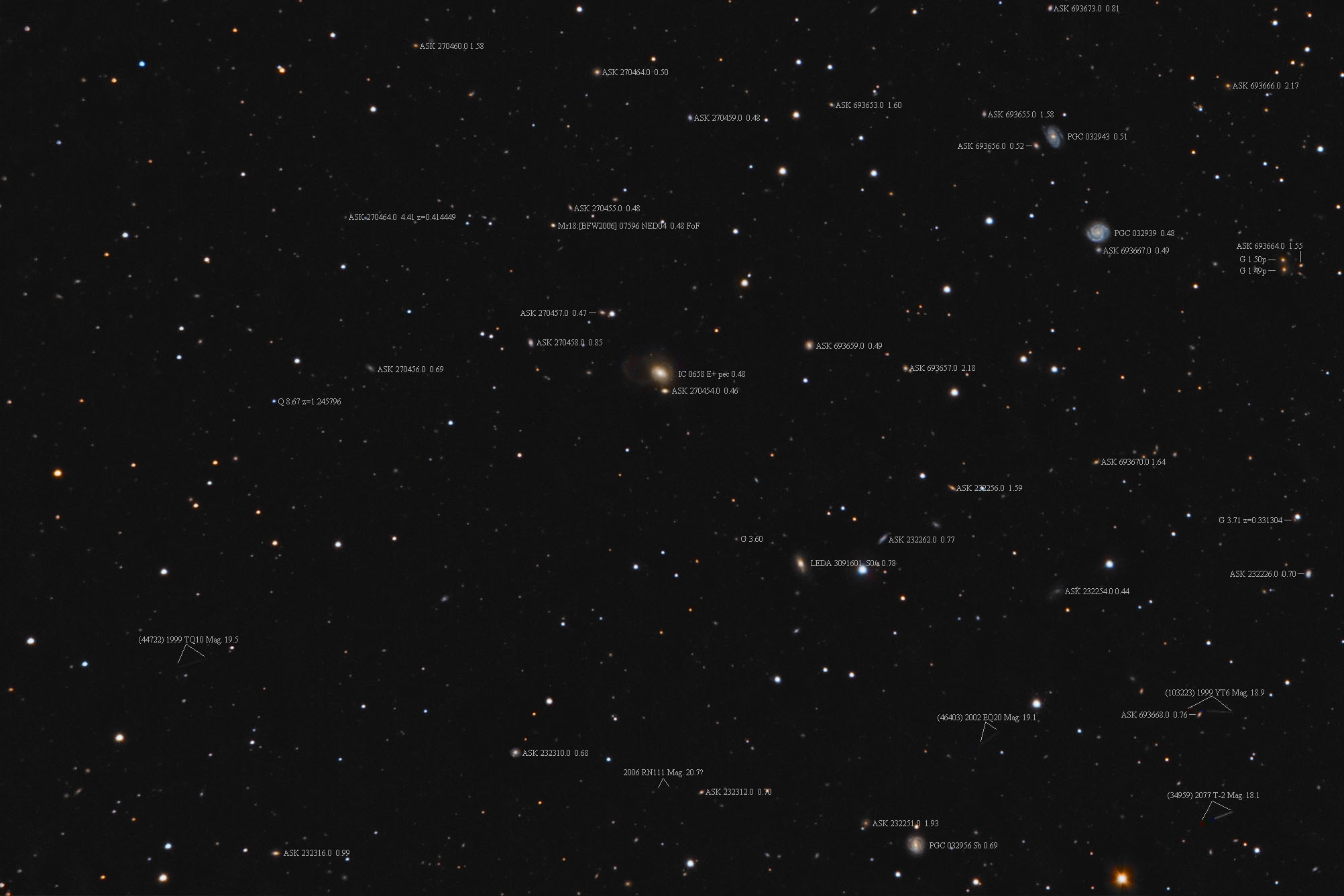