There\'s so much going on in this image its hard to know where to start. The field lies just above the hindquarters and tail of Leo the Lion. My main target was IC 700 a very strange messed up blob of a galaxy. It is so messed up it is its own Hickson Compact Group being #54 on his list which he lists as 4 separate galaxies. So Does NED, the UGC and others. I\'ve noted the four parts in the annotated image. Is it really 4 galaxies? Most sources consider it the result of a merger in progress but can\'t point to what constitutes the merged galaxies as they are too far along in the merger. Was each of the four parts Hickson and others point to a separate galaxy? I doubt it. Probably it is just two, parts 2 and 3 in the annotated image. The two end blue objects likely new star clouds formed by the merger though the differing redshift of the 4th object could say it is the second galaxy or even a third. I found nothing at all definitive about it. It is still holding onto its secrets. The mess lies about 80 million light-years distant by NED\'s redshift values though others put it at 70 million. I prefer the larger figure. Even then this mess is small with a diameter, including plumes of only 42,000 light-years. The mess was discovered on April 28, 1892 by Stephane Javelle.

There\'s a second Hickson group in the image. This one really does contain separate galaxies, 4 of them. It is Hickson 53 and is at the top of the image. The 4 members of the Hickson group are identified in the annotated image as NGC 3697, 3697B, 3697C and PGC 035381 off to the east. Surprisingly ASK 626124 to the west is not included, maybe it is too faint being a low surface brightness disk galaxy unclassified as far as I could find. This group is almost 4 times as far away at about 300 million light-years. That makes NGC 3697 a very large spiral at 210,000 light-years across. It was discovered by John Herschel on February 24, 1827. It\'s in neither of the Herschel 400 observing programs.

There\'s a very small but strange galaxy toward the right edge near the center-line, ASK 959185.0 at 480 million light-years. It appears to be a sloshed galaxy with its core on the far left side of the galaxy, a hole in the middle and two nearly merging blue star clouds on the right edge of the galaxy. Rings like this with the core pushed to one edge usually are caused by a direct hit by a small dense \"bullet\" galaxy. I see no \"bullet\" anyplace in the image. Unfortunately, at this distance, I can\'t see enough to be sure that this is such a ring galaxy but it sure looks like one. Also, it could be what I\'m seeing as a core on the left is the \"bullet\" and the blue objects on the right are what remains of the core now creating stars like crazy. Again information on this galaxy was nil. Another possibly sloshed galaxy is ASK 626113.0 at 340 million light-years above and a bit right of the ring galaxy. Its core is well south of the center of its disk. Again no information on it was found.

Toward the lower left corner of the image there suddenly appears a ton of faint, nearly star-like galaxies. Part of this group is anchored by the Bright Cluster Galaxy (BCG) PGC 035445 with a redshift putting it about 1.6 billion light-years distant. I measure its size at about 300,000 light-years, a very large elliptical like galaxy. It is surrounded by many other galaxies most far smaller but ASK 626061.0 is another giant at 150,000 light-years, half the size of its neighbor. This group is listed at NED as WHL J113009.1+203054 with 46 members. It, in turn, is just part of the even larger Abell 1278 galaxy cluster which NED shows as 30 minutes across. It too is about 1.65 billion light-years distant. While the center is shown in the annotated image it appears few of its members are found in the western two thirds of this image. Instead, they are mostly in that lower left corner. How far they extend beyond the image I don\'t know. It is listed as being morphology class III which means it has no anchoring galaxy or galaxy and little condensation That too doesn\'t seem to agree with its position in my image. The cluster is said to be \"group 3\" as to number of galaxies which translates to 130 to 190 galaxies with the magnitude range of M3 to M3+2. OK, that too needs translation. M3 is the third brightest galaxy in the group. Thus it isn\'t a count of the galaxies and in fact, may include galaxies, not actual members but that fall within the magnitude range and are within the same line of sight. All this makes my head spin.

Now, this might appear to be a very deep image it really isn\'t. The night was very bright with both airglow and ice crystals in the air. I took the image at -40C with 3% power to the cooler as the ambient temperature was also nearly -40C. That causes moisture in the air to condense out as fine crystals that suspend on a still night. They really brighten the image and create a fog that spreads light from bright stars, especially blue stars, across large areas of the image. Fortunately, there was only one such star in this image so dealing with it wasn\'t as difficult as it usually is. All the other bright stars were rather red and fainter. Still, this was a better night than others in January, at least up to this point. 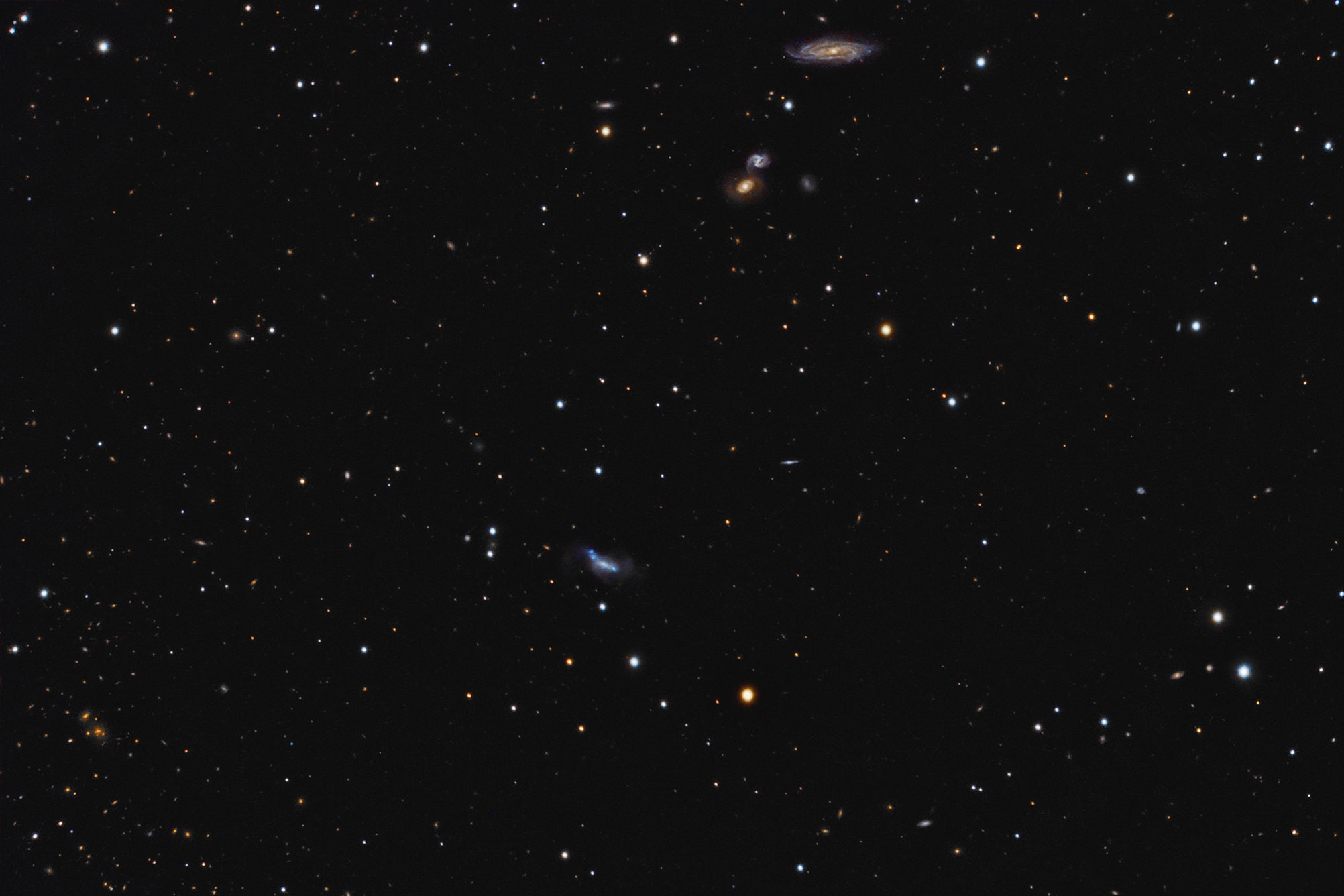 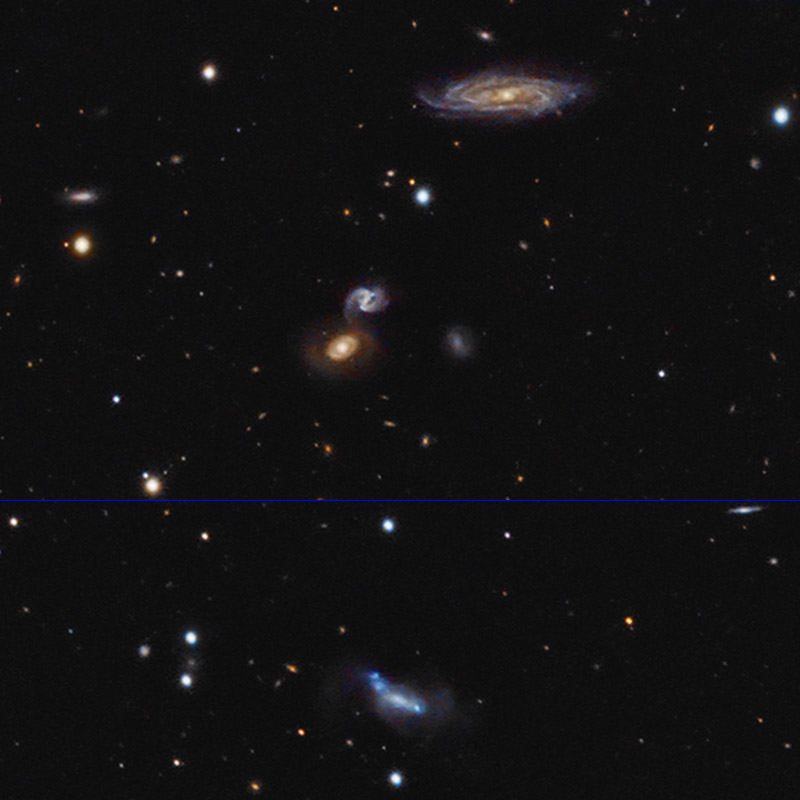 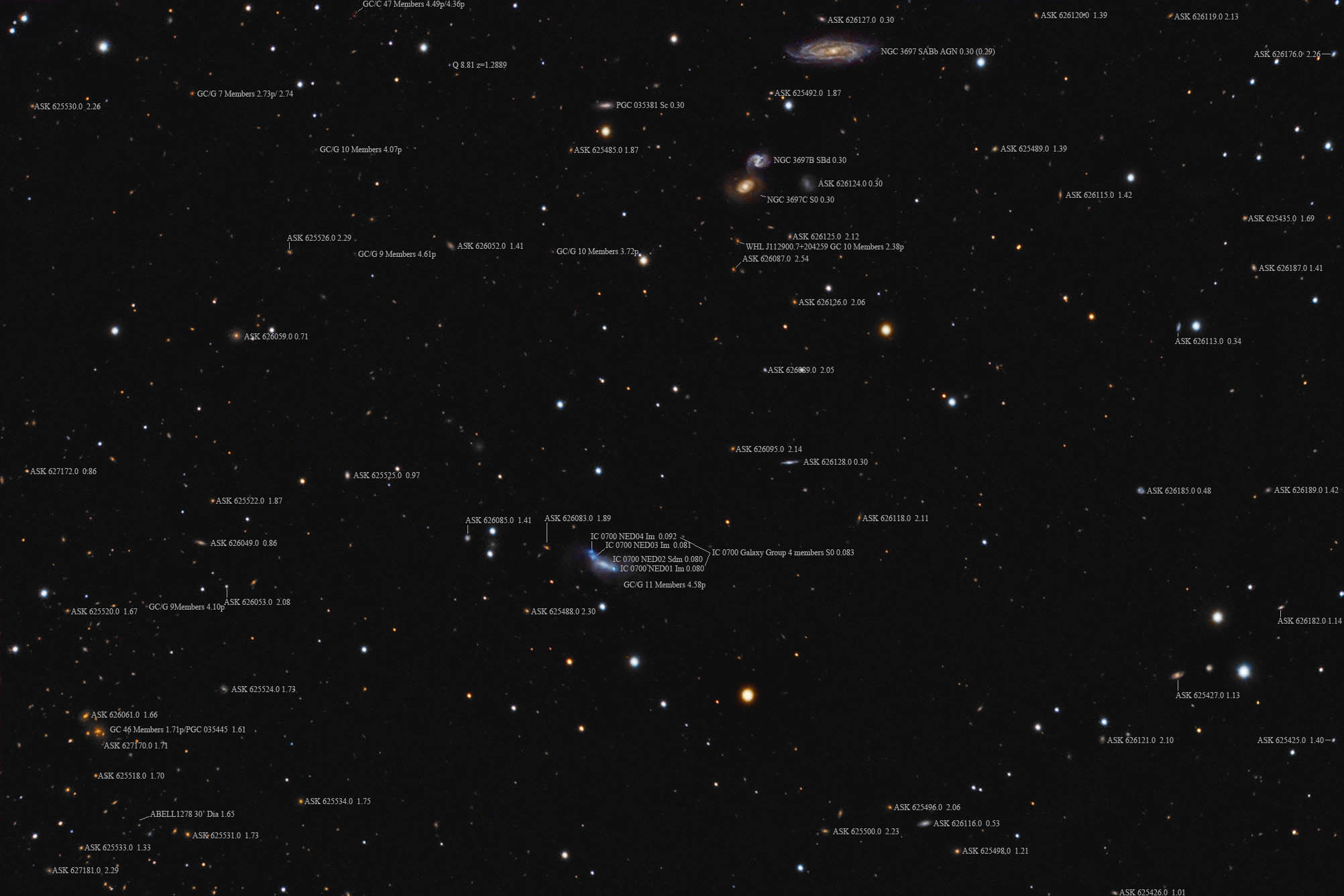