Redshift puts them some 40 to 50 million light-years distant though other distance measurements put them 70 to 150 million light-years distant. Most sources are preferring the redshift distances. I looked at an NIC camera image of IC 749 which showed few stars. That would indicate the more distant estimates. However other sources say the stars start to resolve at magnitude 22 which would argue for the nearer distance. The galaxy is very blue so is full of young super hot stars. Most of which haven\'t as yet turned to red giants. This could mean there aren\'t many IR bright stars in the first place. One note at NED indicates these are definitely interacting. Others make no mention of interaction. Another question which is at issue. Visual light doesn\'t seem to show any interaction. Assuming a distance of 45 million light-years the projected separation of these two (assuming the same distance to both) would be only 26 thousand light-years. I\'d expect rather strong interaction if this were true. Since none is seen I doubt they are as close as they appear. At the distance of 45 million light-years, these are rather small galaxies with both being about 27,000 light-years across. If the larger distances are assumed then IC 749 is almost 90,000 light-years across and IC 750 41,000 light-years across.

The color contrast of the two is striking. IC 750 hasn\'t had much star formation in billions of years judging by its mostly red color but is a very dusty galaxy indicating it could create quite a few stars under the right conditions and turn blue if it as an equivalent amount of hydrogen. Only its outer disk has a blue tinge to it. To me, it shows a lot of detail for a red spiral. Could the red color be due to dust reddening rather than stellar aging? Maybe some of both? I found nothing on its stellar spectra which would help answer this question. For now, we can just enjoy this highly contrasting pair of galaxies. This pair was discovered by Rudolf Spitaler on May 18, 1892.

IC 751 and 752 lie about 425 million light-years distant by redshift. Again we have a face on blue spiral and a somewhat red highly tilted galaxy. Both have interesting but hard to explain internal structure. IC 751 may be rather red but it has a Seyfert 2 core so is very active. IC 752 has a very weird spiral structure with one well defined arm and the other virtually invisible with lots of blue star masses. If the distance is assumed to be 425 million light-years then IC 751 is 130,000 light-years across and IC 752 just under 90,000 light-years across. That makes them a lot larger than the first pair. Note the somewhat detached arc of stars at the southern end of IC 751. It almost looks like the tidal plume of a galaxy torn apart as it was devoured by IC 751. Could one of those bright blobs be the remains of this doomed dwarf galaxy? I\'d love to see both of these at HST resolution. This pair was also found by Rudolf Spitaler but nearly a month later on May 18, 1892.

Another interesting galaxy is KUG 1155+428. A nice two arm spiral with a bright knot at the end of the shorter arm. Is this a star cloud or a separate galaxy. NED offers no enlightenment. The Sloan survey apparently considers it part of the galaxy.

The annotated image shows the classifications of the major galaxies and distances to all that NED had data for. Distances in parentheses are the median value of non-redshift distance estimates at NED.

While seeing was better than average for this image I again lost a lot due to clouds. Though three of the 4 luminance subs were taken under very good skies the 4th was poor. I included it, though I doubt it helped or hurt the final image. With basically three subs my noise level is higher than normal but good seeing seems to have compensated nicely. Color data was a disaster. The color taken after the luminance was worthless. A second night and a third night and a fourth night also failed to get color data. Finally a month later I got my usual 2 color frames. Unfortunately, something went wrong, clouds apparently, and the second round of color was nearly blank! Only the brightest stars showed with nasty cloud type fog around them. Normally the cloud sensor would have shut me down so I suspect a cloud bank sat over this field but was small so didn\'t trip the cloud sensor. The result is I got only one usable 10 minute frame for each color and didn\'t know it until I went to process the image. But again, good seeing and good transparency for that first round seem to have saved the image. Many of this year\'s images with two 10 minute color frames were far worse in signal to noise ratio than these single 10 minute frames. I was amazed how well this turned out for only 30 minutes of color data. Maybe this is all I need on good nights? I like 2 as that allows me to remove satellite trails without cloning them out. Fortunately, no satellites made an appearance for the color frames. Two did for the luminance frames. One I left in as it is very hard to see. Where the other was removed there\'s only two good stacked luminance images plus the very poor one. Even that didn\'t seem to increase the noise level in the area of the trail when it was removed. 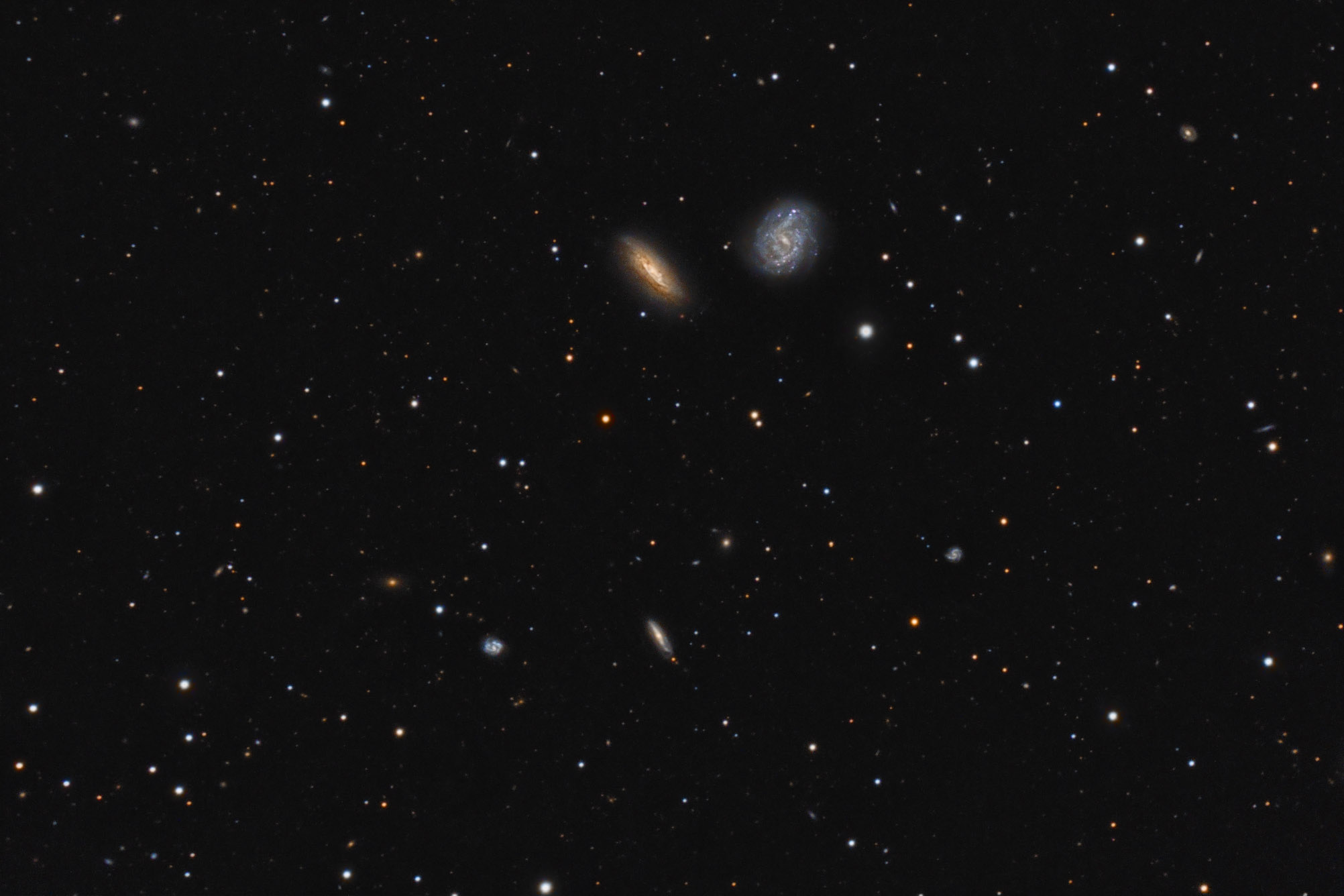 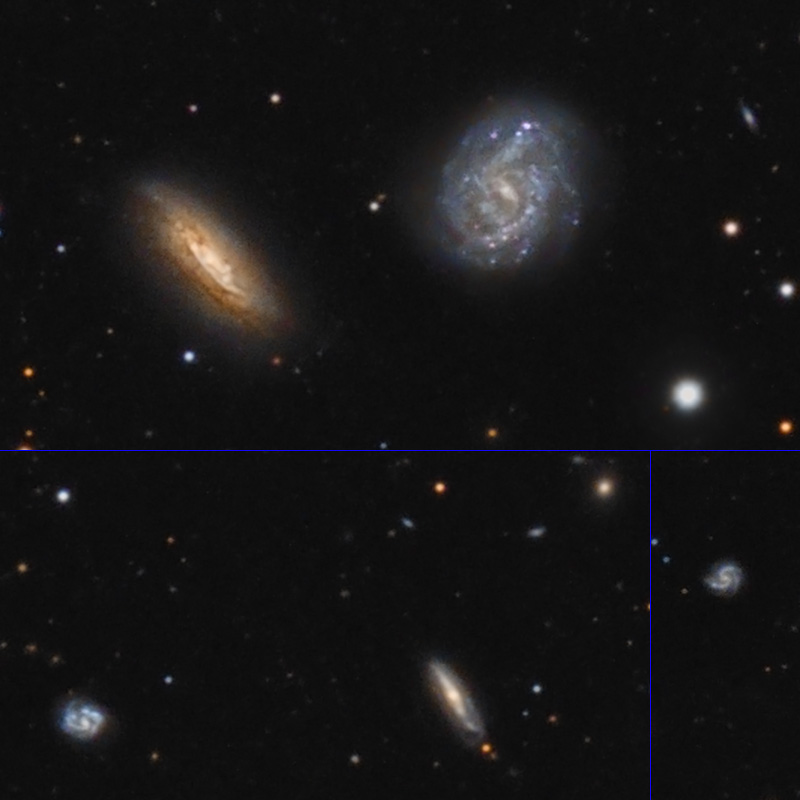 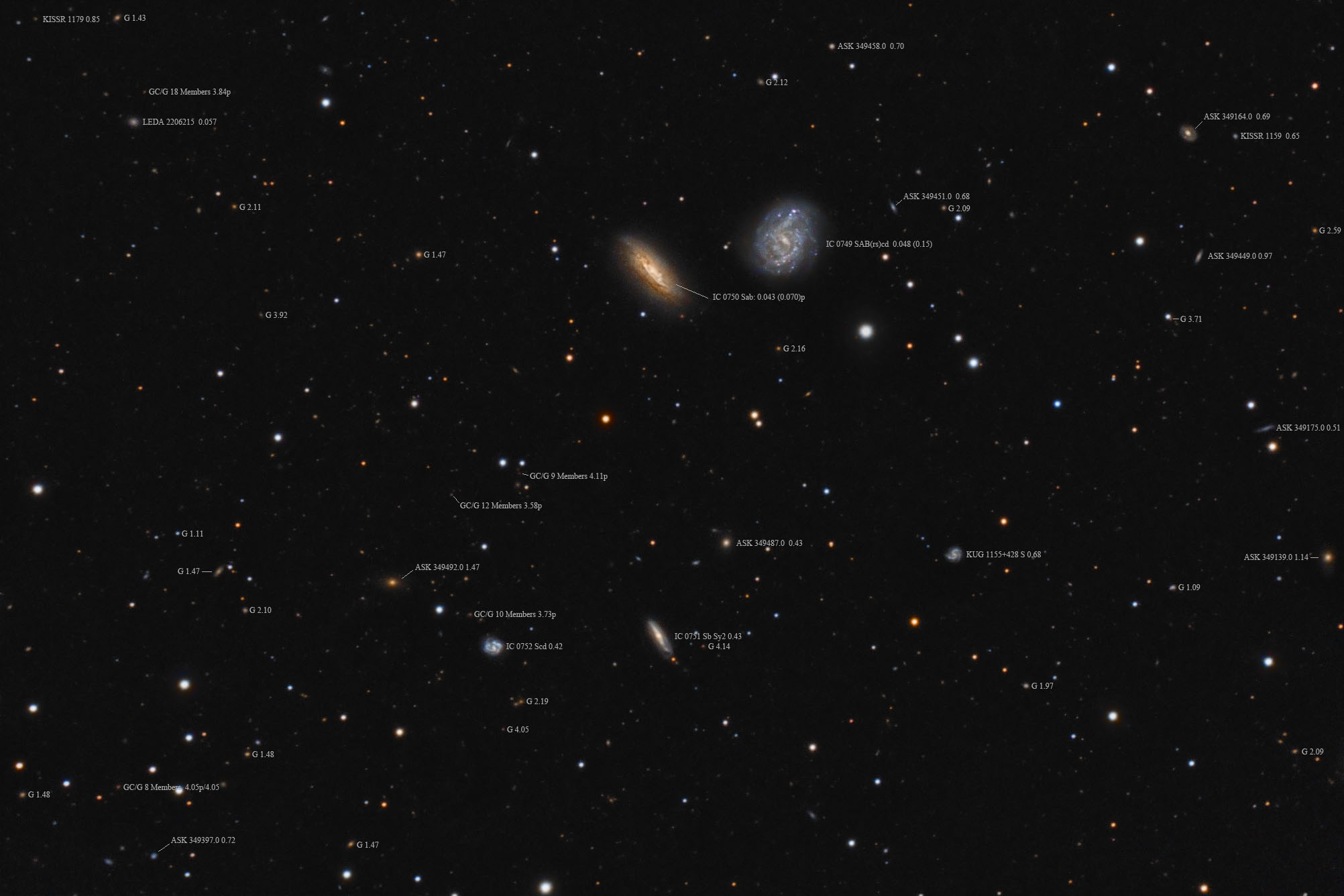