IC 1194 is a member of the Hercules Galaxy Cluster on its eastern edge. I missed picking it up when I imaged the heart of the cluster due to my FOV being too small. Like several other members of the cluster, including some on the western edge of this image, it has large plumes apparently due to interaction with other members of the cluster. NED classifies it as SA(s)0+ pec. While the bright region of the galaxy is pretty average in size at 60,000 light-years in diameter its plumes extend its diameter to 385,000 light-years at its assumed distance of 530 million light-years. IC 1182 on the western edge of my image has a smaller plume. Its bright diameter is much larger than IC 1194 at a bit over 100,000 light-years at its redshift distance of 470 million light-years. With the plumes (mostly to the north) its size grows to 225,000 light-years. The brightest plumes belong to Arp 172 (IC 1178 and IC 1181) in the lower right corner. At their redshift distance, the plums extend to about 285,000 light-years. At least in the case of Arp 172, we know the plumes are caused by the interaction of the two galaxies. What caused the plumes in the case of IC 1194 and IC 1182 is more difficult to determine. I found nothing in the literature to help. They may be due to a long ago merger with another galaxy. All three were discovered by Stephane Javelle on August 13, 1892.

The annotated image lists all galaxies that might be a member of the cluster by name and redshift distance. NED gives a distance of about 500 million light-years for the cluster itself, also known as Abell 2151 though the redshifts range nearly 50,000 light-years either side of this figure. This would indicate rather high velocities of the members, maybe enough that some will be kicked out of the cluster. That depends on the dark matter mass I suppose. In any case, the high dynamics make it quite likely that interactions like these would happen.

At the bottom center of the image is PGC 05170. It appears quite messed up. NED also lists a galaxy ABELL 2151[HKT95] 4028 to its southwest about where there\'s a condensation. Problem is its position is vague (+/- 5 seconds). That\'s not enough to reach the core of PGC 05170 but the condensation on its southwest side is within that error bar. NED classes this second galaxy as Sdm. It lists PGC 05170 as SdI. That would seem to indicate they could be talking about the same galaxy rather than 2. I\'ve annotated these as two different galaxies but they may be the same one. Several times in the frame NED had two entries for obviously the same galaxy. Usually one had a large error bar that sometimes wasn\'t large enough to include the galaxy. I listed only the accurate designation except for this entry as it was too ambiguous to take that path.

Also, several parts of IC 1182 were indicated by NED to be c, d, and E. They were listed as part of the galaxy though appear to be separate galaxies. For part c there\'s a fuzzy patch just below a bright blue star-like object. The coordinates match the star-like object rather than the fuzzy blob. While my resolution is poor at the edge of the field its PSF seems to indicate it is a star rather than a galaxy. But NED says the position error is only 0.5\" of arc which isn\'t sufficient to reach the blob running just below it. It looks to me to be a star on the Sloan image as well. I drew the line to the star-like object as it is at the indicated position. For a major field, I was surprised by all the ambiguity identifying the galaxies.

Again, due to weather, I had to throw out 6 luminance frames and 4 frames for each color. Conditions were poor for those I did use so this one doesn\'t go as deep as I wanted. Green was still very suspect and weak. I used some tricks to try and restore green to a proper balance. I think I was rather successful. Another for the reshoot list I suppose -- eventually. 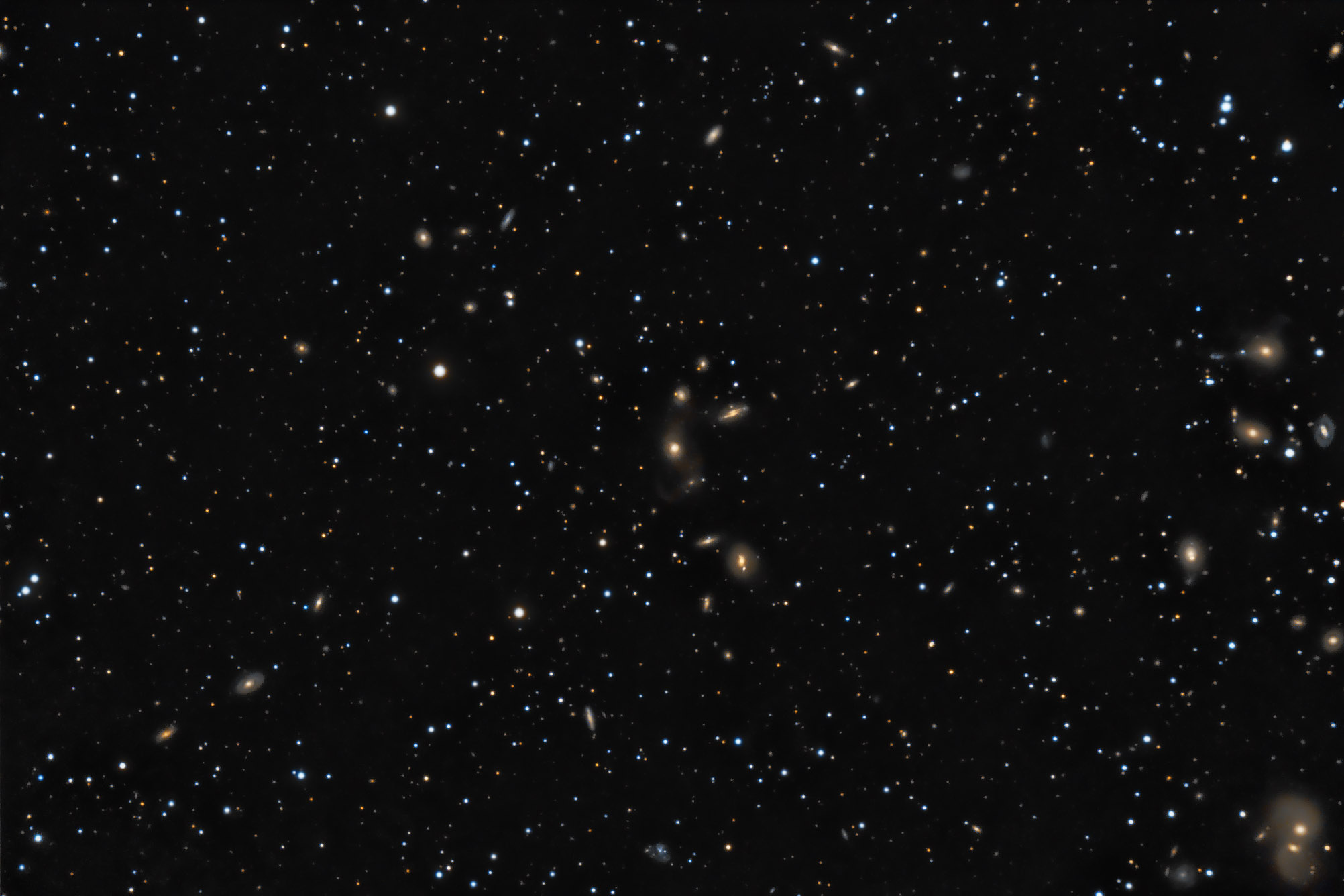 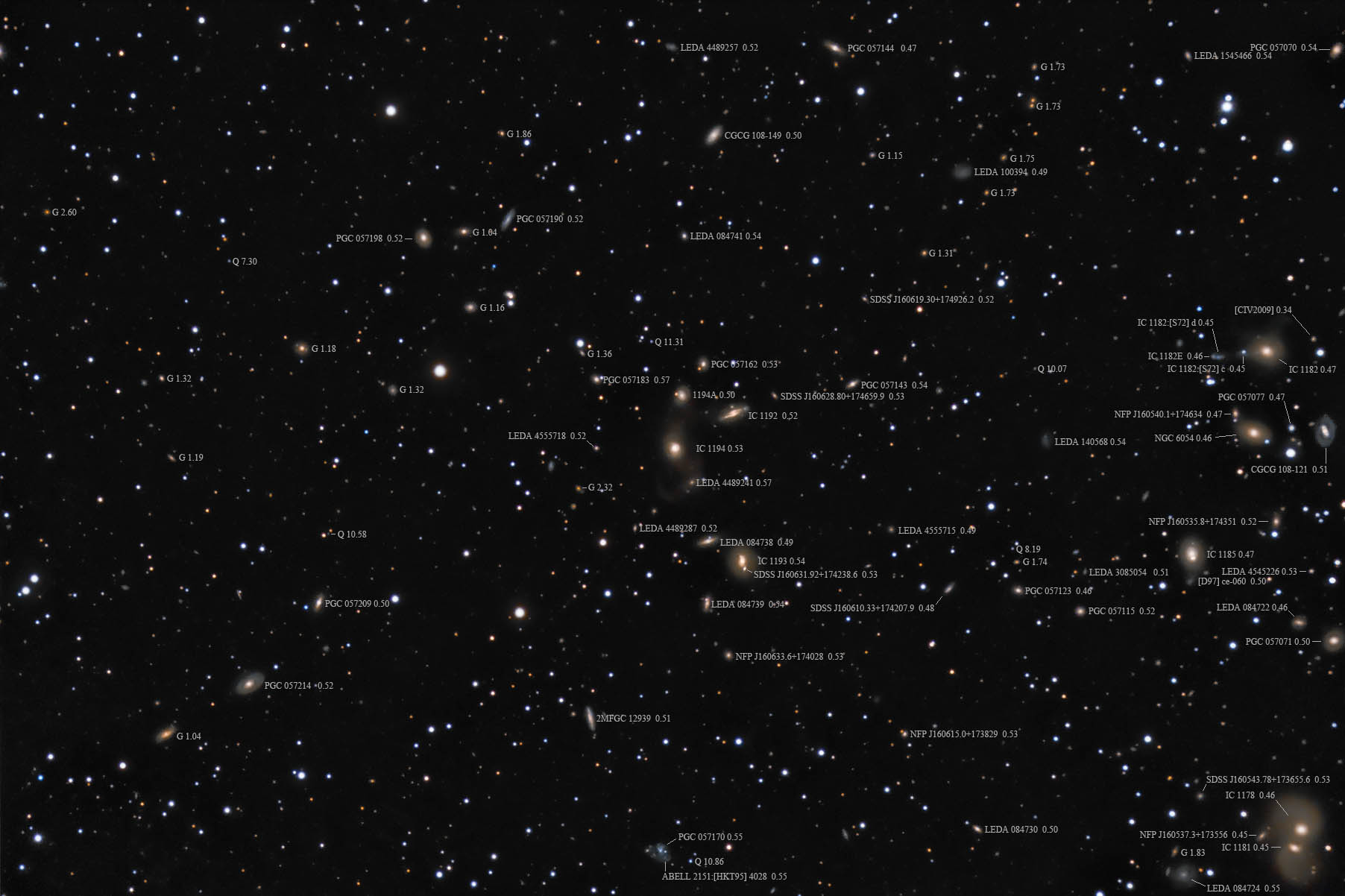