IC 1262 anchors a small cluster of galaxies. I\'ve mentioned before I sometimes get requests, this one came from Sakib Rasool, a name I\'m mentioning a lot of late. Not often do these make it onto my to-do list but this one did since the cluster contains the rather wacky galaxy IC 1263 to its north. As is obvious, I have a penchant for these. Maybe it\'s because my ham call sign, given me at random by the FCC over 55 years ago, is WA0CKY (the third character is a zero so my dad said the FCC knew I was a wacky nothing -- he was joking, I think). This field is located in Hercules not far from M92. The cluster is anchored by the elliptical cD galaxy IC 1262. Redshift puts it at about 440 million light-years from us. Though the distance to various members varies quite a bit due to rather high orbital motions of the cluster members. The cluster goes by many names, IC 1262 group, Zwicky 8239, WBL 643 and many others. Of course, the one I was told was Zwicky 8239 which isn\'t recognized by NED. Fortunately, Simbad did know of it. We have created quite a tower of Babel with these many catalog names for the same object, often with slightly different positions due to which galaxies they include and exclude.

IC 1263 is classed as SBab. I\'d have expected a ring designation but apparently not. A note at NED indicates it may be interacting with IC 1262. I see no sign of any distortion to IC 1262 so rather doubt this connection. Redshift puts it at 391 million light-years. A rather large difference for interacting galaxies. If they really are at about the same distance (or were), the interaction would have been very brief due to the velocity difference. Still, IC 1263 is a very interesting looking galaxy.

Cut off at the bottom of the image is IC 1264. NED classes it as E/S0. It seems to have a plume or weak spiral arm. Is that due to the small companion to its east-northeast? The two share the same UGC number, 10904 but this happens with totally unrelated galaxies all the time and is meaningless. They do have somewhat similar redshifts.

The annotated image shows the distances to all galaxies for which they are available, that\'s nearly all of them listed in NED. Most without distance measurements are not in NED. Most that are, are in the 2MASX IR catalog though a few are from other more obscure catalogs. Those few from somewhat major catalogs are listed by that identification. Those from the 2MASX and other lesser known ones like the Galaxy Index Number and NOAO Fundamental Plane (NFP) that use only location as the designation are shown by redshift look back distance only.

As usual, some blue galaxies are totally omitted. I marked the brightest with a question mark. Really blue galaxies often meet this fate. I still don\'t know why. Several others are very obvious in the image. I can understand they often don\'t have strong enough IR emissions to make the 2MASX which constitutes the majority of identified galaxies but I\'d think some of the other catalogs would pick them up. They must not meet their entrance requirements.

All measured galaxies seem to be members of the NGC 1262 group. Many of the rest likely are as well. Some though are likely far more distant. The distant ones are likely the most reddened ones but that can be deceiving. 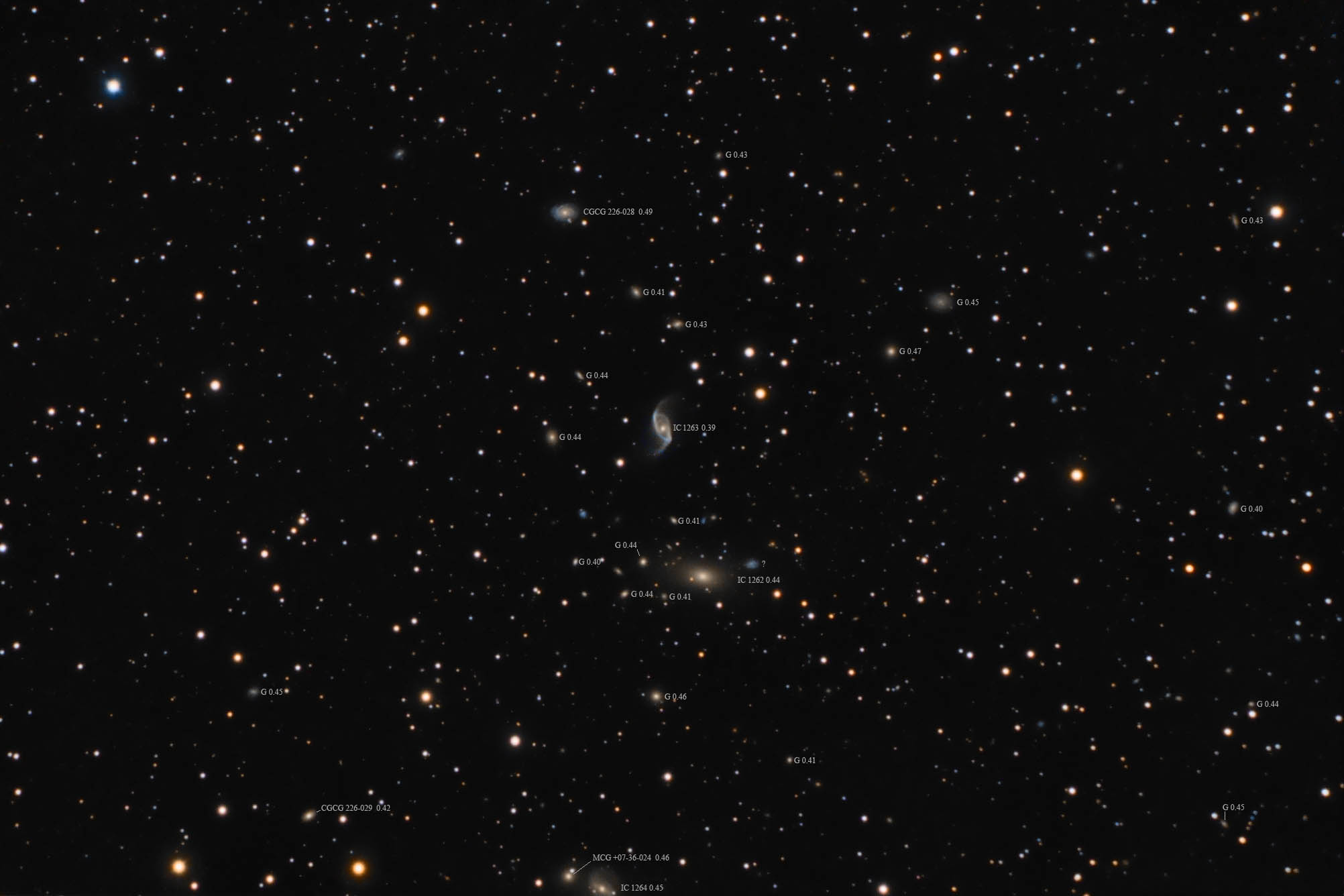 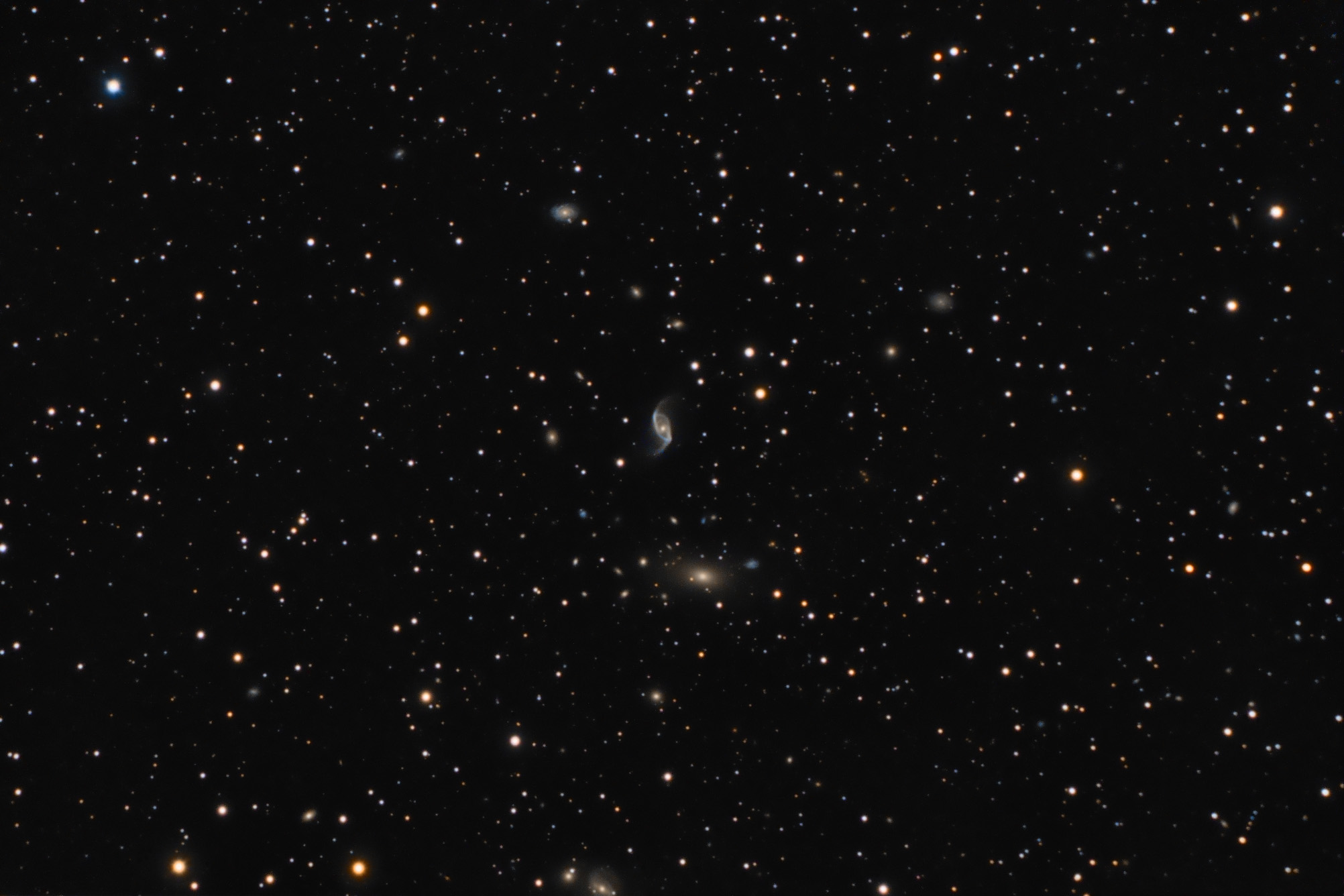