There are a few interesting galaxies around IC 1413 that caught my attention. I used IC 1413 as a reference as the other galaxies in the image are quite obscure. Also IC 1413 is considered a flat galaxy by the 2 micron catalog, just not flat enough to make the FGC. Unfortunately I didn\'t find any information on it other than a distance of about 210 million light-years which makes it about 64,000 light-years across. I can\'t tell if it is an S0 or edge on galaxy. Only one source classified it and then only as S for spiral. Without a dust lane S0 may be more likely. It was discovered by Stephane Javelle as #453 in his catalog on September 19, 1892. While this field is at -3 degrees declination there is some IFN in the northern part of the frame which caught me by surprise.

I was more interested in two other galaxies in this field. To the northwest is LCSB F0054N. That is in the Low Central Surface Brightness catalog. I found nothing on it. It appears to be a somewhat disrupted face on barred spiral. NED gives it a look back time of 120 million years. That would make it about 40,000 light-years across. There is a blue something on the eastern side of the core on the bar. I can\'t tell if it is a field star or a star cloud. These are rare on a bar so I lean to it being a star. NED lists the northern part of this galaxy as a separate galaxy for some reason. This is a common issue at NED with some galaxies.

The other galaxy that caused me to put this field on the to-do list is the very wide spiral south of IC 1413. It is listed only as a Galex Uv source and as an anonymous galaxy in the Automatic Plate Measuring United Kingdom survey. I can\'t tell if the \"arms\" are really arms off the end of a bar or if they are plumes. It too has a mystery object on the northeast side of the galaxy right on the arm. Again it may be a star, a star cloud or possibly the core of a second galaxy that is interacting with the main galaxy that has had most of its stars stripped off, maybe the cause of the plumes if they are plumes. Again I found absolutely nothing on it. Oddly it is a bit red in my image but quite blue in the Sloan image. Likely due to UV I\'m not picking up. If so this may support it being a core of an interacting galaxy forming hot massive stars thanks to the interaction. Or there\'s a color issue with my image. The night was very poor. I have no distance for this galaxy so no idea of its true size. The southern plume extends much further than the northern one. Oddly The Sky insists this galaxy is IC 1413.

The only other galaxy with redshift data is LEDA 190922 another S0 or edge on spiral without a dust lane. It is much larger 160,000 light-years thanks to its much greater distance of 720 million light-years.

Below LCSB F0054N is LEDA 1076771 a rather obvious face on barred spiral. I found nothing on it however. On the far left is what I took to be a pair of interacting galaxies listed at NED as another APMUKS galaxy. But looking at its image in the Sloan Survey it is really a messed up disrupted galaxy that likely was a spiral. A second tiny galaxy is to the north. What disrupted it is unknown. I doubt the little galaxy just to the north is large enough to be the cause.

This field contains lots of interesting galaxies, just that there\'s no data on them.

Conditions were awful the nights I tried to get data on this one. Even with 7 luminance and 3 each of each color which is 50% to 75% more data than normal for me it is data starved compared to what my normal time would get on a good night. Several 19th magnitude asteroids are listed as being in the image, These are normally easy but I see absolutely no sign of them indicating how poor conditions were. I likely would have picked up a lot more of the IFN as well as seeing more detail in these galaxies if it had been taken on a typical night. This is my first August image. I hope the rest of the month isn\'t this bad. 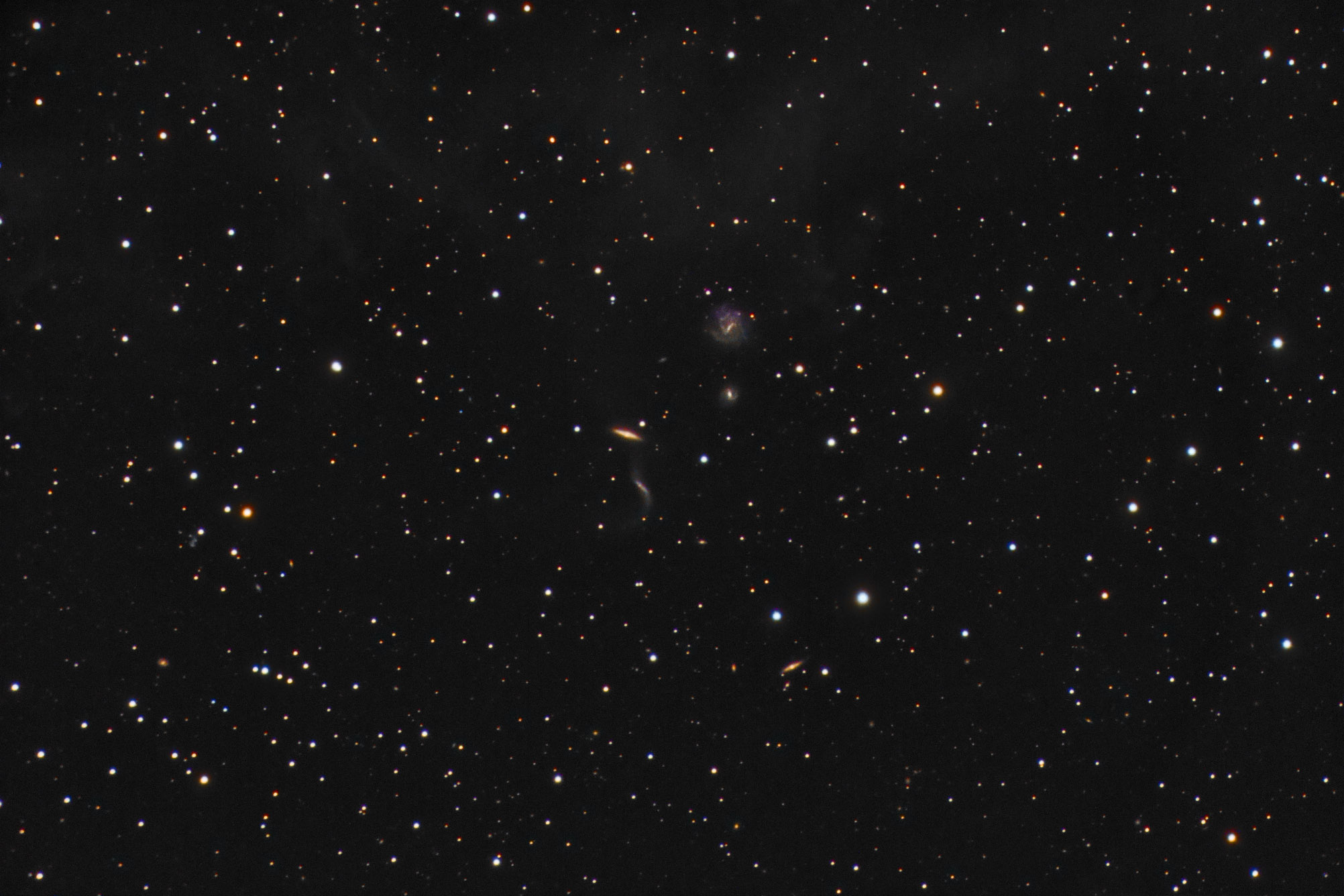 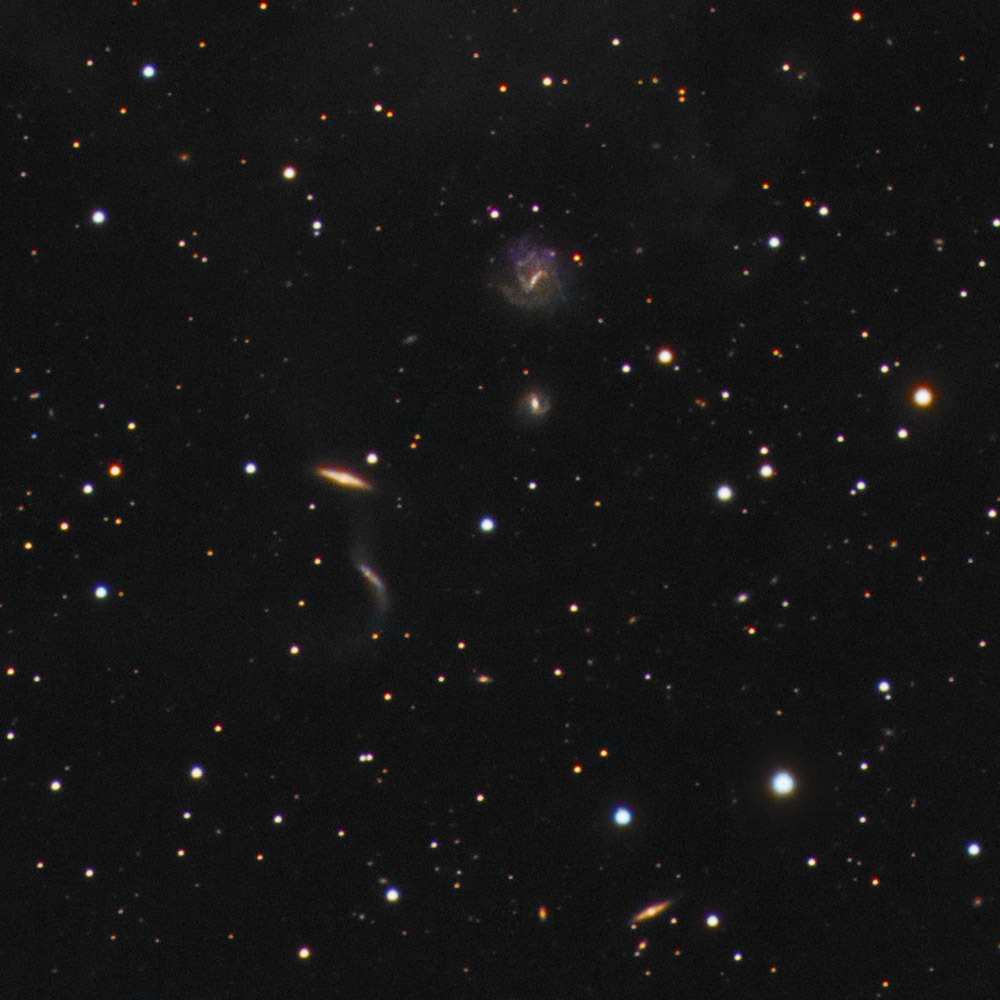 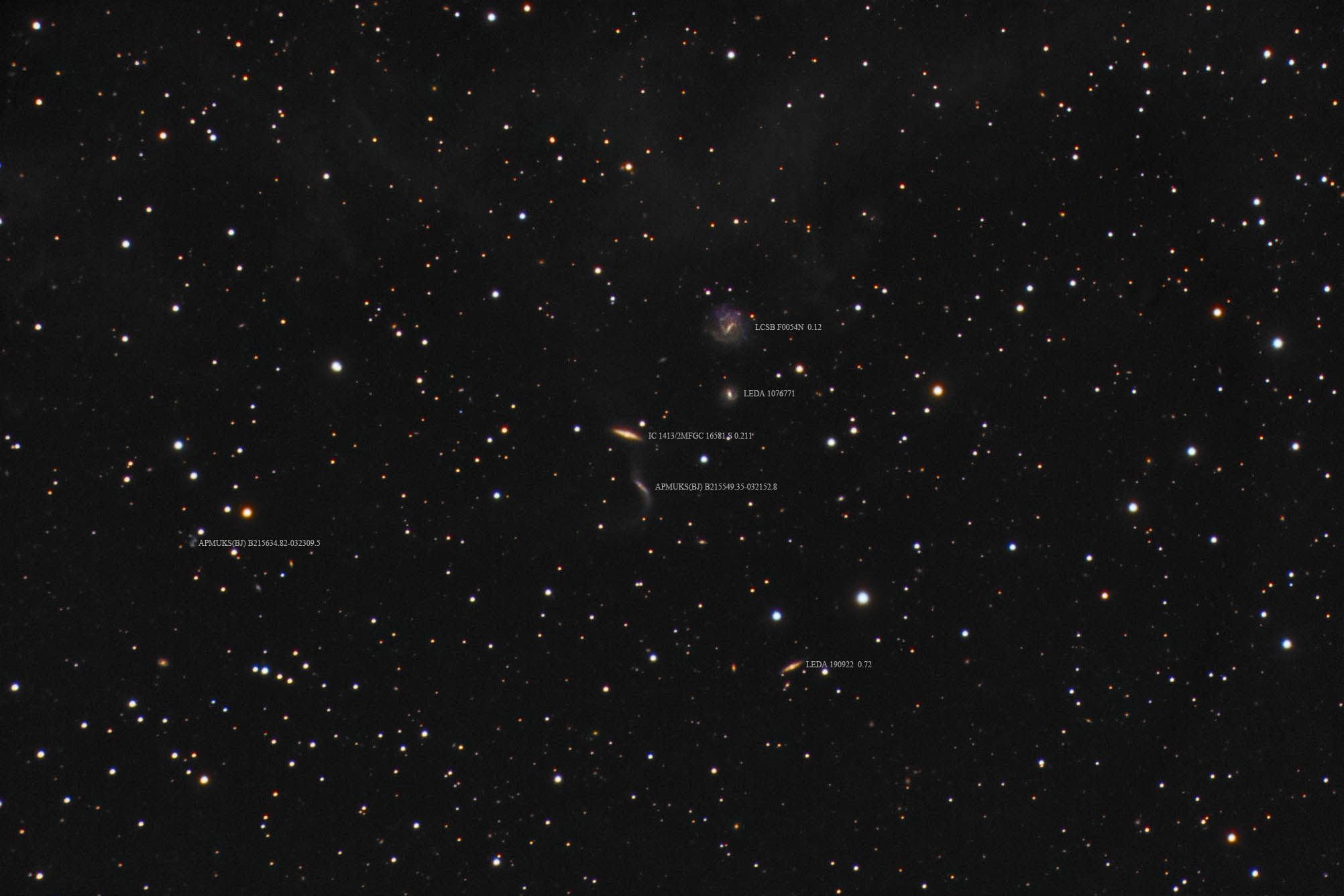