NGC 7594/IC 1478 is an enormous spiral galaxy in Pegasus, just below the Great Square. It is about 470 million light-years distant. To be so large in my image at nearly a half billion light-years it has to be big, about 205,000 miles in diameter as seen in my image. Unfortunately, the night was very poor and it likely is even larger. IC 5305 at 460 million light-years is a likely companion. The distance difference is likely quite small, just that their relative motion makes the redshift distance larger than it really is. NED shows it part of a three galaxy group WBL 706. Obviously, IC 5305 is one of those two other galaxies but I can\'t determine which is the third.

2MFGC 17488 appears to be a companion of IC 5306 but it is 200 million light-years further away so they are just a chance alignment rather than a true pair though many catalogs list them as pairs.

NED shows only these galaxies with redshift data. Since there were only a few other galaxies even listed in NED I went ahead and noted them in the annotated image even though they had no redshift. All were from the 2MASS catalog of IR galaxies. That is likely why the blue galaxies in the image, marked by question marks, while bright, aren\'t listed. They just don\'t have the IR emissions to make the 2MASS catalog.

The quality of the night was very poor. Much is lost I\'m sure. The evidence for this is the lone asteroid shown in the image (135118) 2001 QT117. It shows at two places in the image rather than a constant trail as these normally do. This is because clouds were so bad only 2 of the 4 frames used showed the asteroid at all. 4 others taken between these were even worse than the two I used that didn\'t show it. This explains the broken trail. The color frames were very poor as well with many of them thrown out. Two blue ones were fair and were used. All green and red were very poor but I picked the two best for each. Thus the color is somewhat questionable. I did have to make a large reduction in the blue channel to get decent color. It still may be too blue. 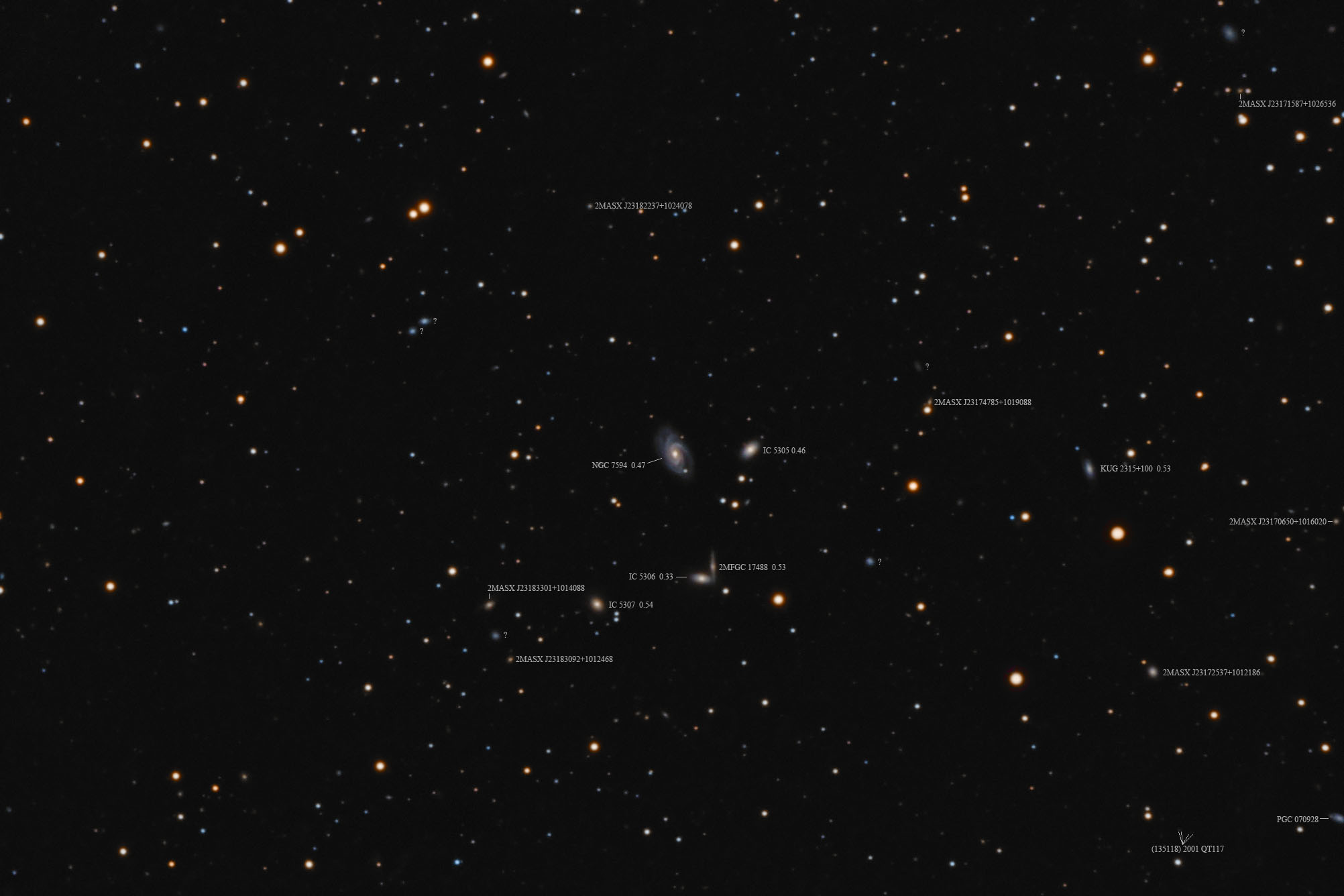 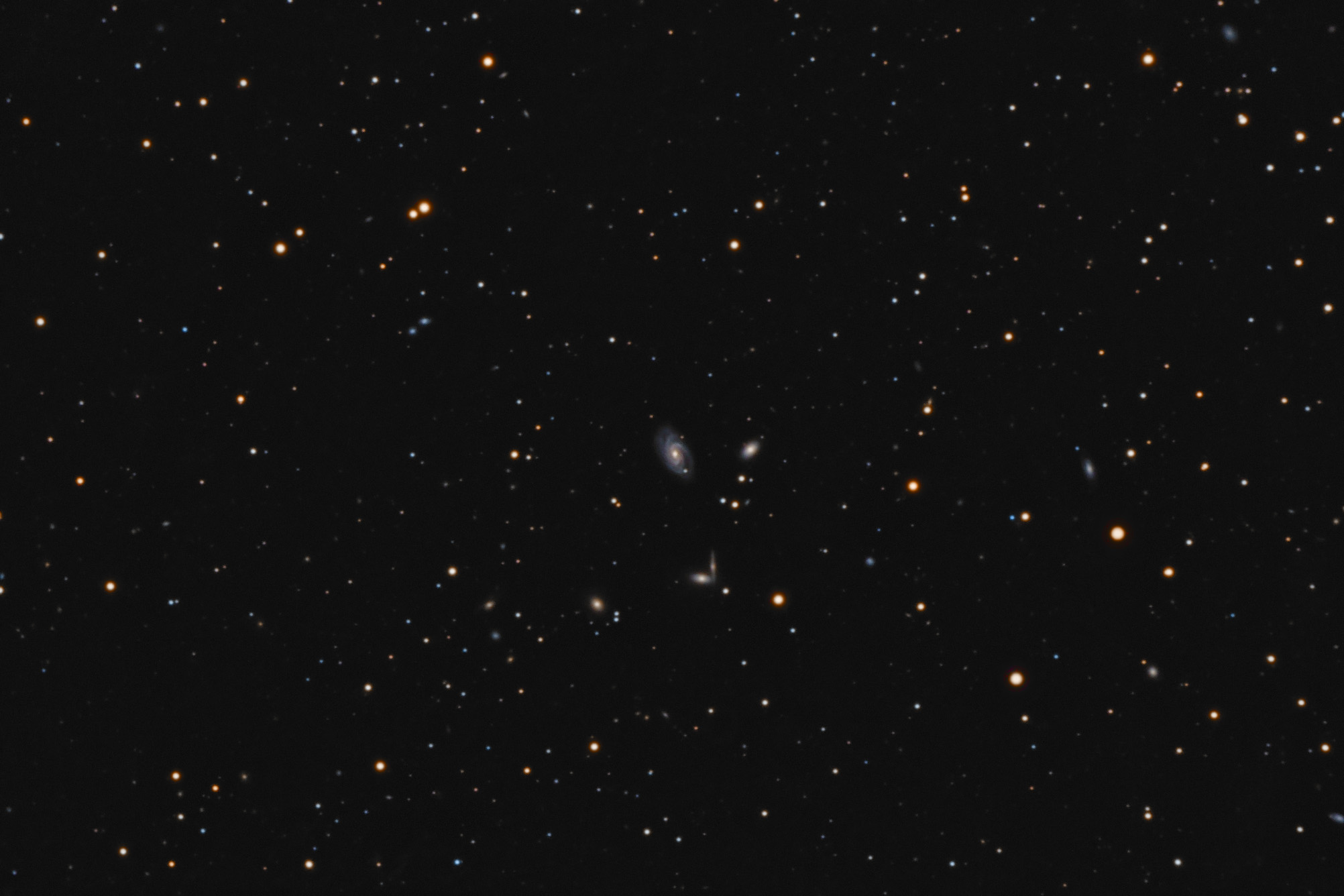 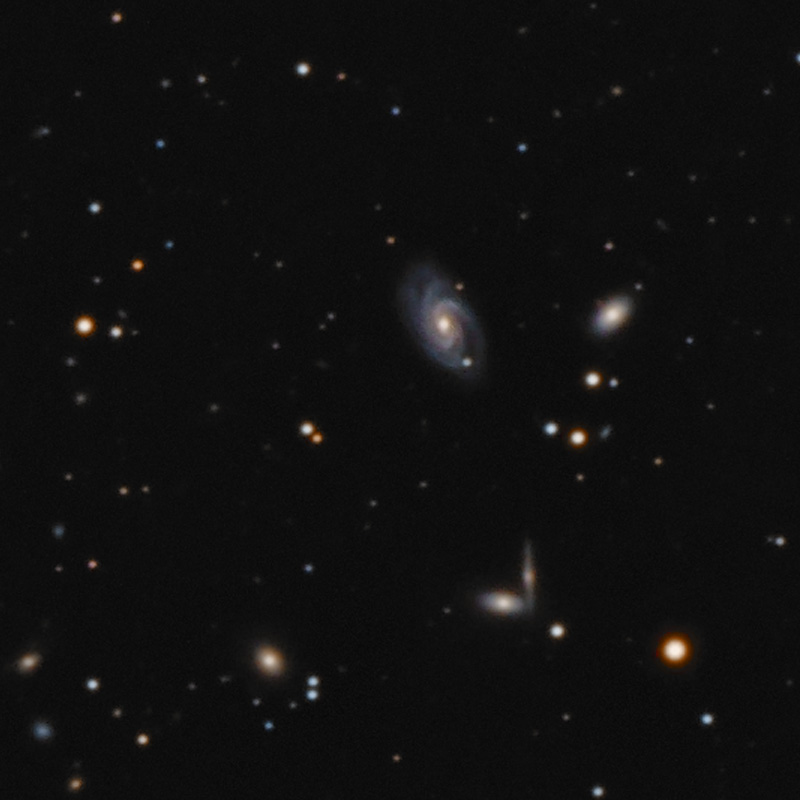