IC 2910 as a barred spiral with a huge halo. Unfortunately the night I took this was very poor with rather thick high clouds which severely harmed both transparency and seeing. I\'m only throwing it out here for the field others may wish to try next spring. By the time I got to processing this it was too late to retake it under better conditions this year.

The galaxy is about 310 million light-years distant and part of a group of galaxies also at this distance in northeastern Crater. NED classifies it as (R\')SB(rs)0+ pec while Seligman says more simply, S0/a??. While I didn\'t find a group designation for this field all galaxies in the image that NED had redshift data for but one were at the same redshift distance but one and it\'s slightly lower value probably is due to its orbital rate around the group than being a real difference. Unfortunately, most of the field is outside of redshift surveys so most don\'t have redshift data. I\'ve listed all I could identify though most weren\'t in NED\'s database at all with or without redshift data. Those are listed with PGC numbers and no distance in the annotated image. Are the distant background galaxies or just smaller members of the group? I suspect a bit of both but with no data that is sheer speculation.

Plumes indicate some type of interaction. The red color indicating little recent star formation supports this idea. Not finding any likely candidate, at least in my image, it may be that the plumes are due to some galaxy it is digesting. Ignoring the plumes it is about 61,000 light-years across. Rather typical of a barred spiral. Including the plumes, it is over 150,000 light-years in size. Probably larger as poor conditions limited my ability to see the full extent of the plume. The galaxy was discovered by Guillaume Bigourdan on March 29, 1895.

MCG -02-30-001 is an Sc galaxy to the southeast that has a bright star cloud in its north arm that seems made up of several clouds and a small starlike one in the southern arm. Again I was unable to find anything much on it. The pair of galaxies north of IC 2910 may be a true pair or not. Only LEDA 182693 has a redshift distance. To its west is LEDA 170153 that is likely a true companion. It may appear to have a spherical galaxy to the southwest but that is just a star that looks galaxy like due to the bad seeing and being in the faint outer shell of LEDA 170153.

In the northwestern corner is LEDA 170152 which is just listed at NED as \"Spiral\" It certainly has a lot of interesting internal structure with two arms that are very different as well as some star clouds, one on the end of a surprisingly straight arm. I wish I could find something on this interesting galaxy but again came up empty.

To the east of IC 2910 is PGC 987240 which has what appears to be a large blue plume. The entire galaxy is quite blue indicating lots of star formation in it and in the plume. How it fits in with the rest is unknown due to lack of information.

So this is a very interesting field that asks a lot of questions but answers none. Two asteroids are in the field but due to very poor transparency don\'t show sufficiently for me to even try and point them out. They are about 20.5 magnitude which normally would be easy to see. That shows how bad this night was. 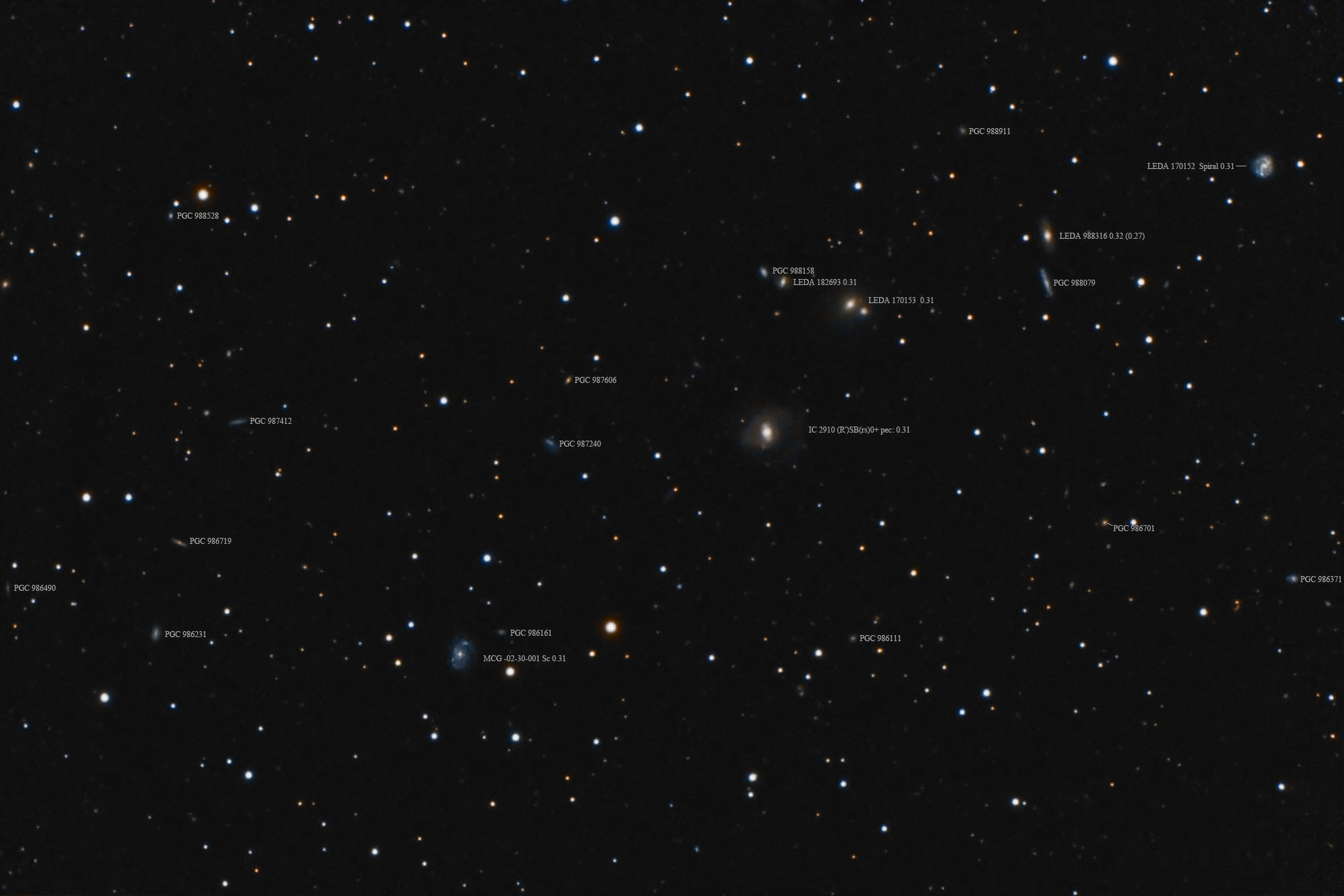 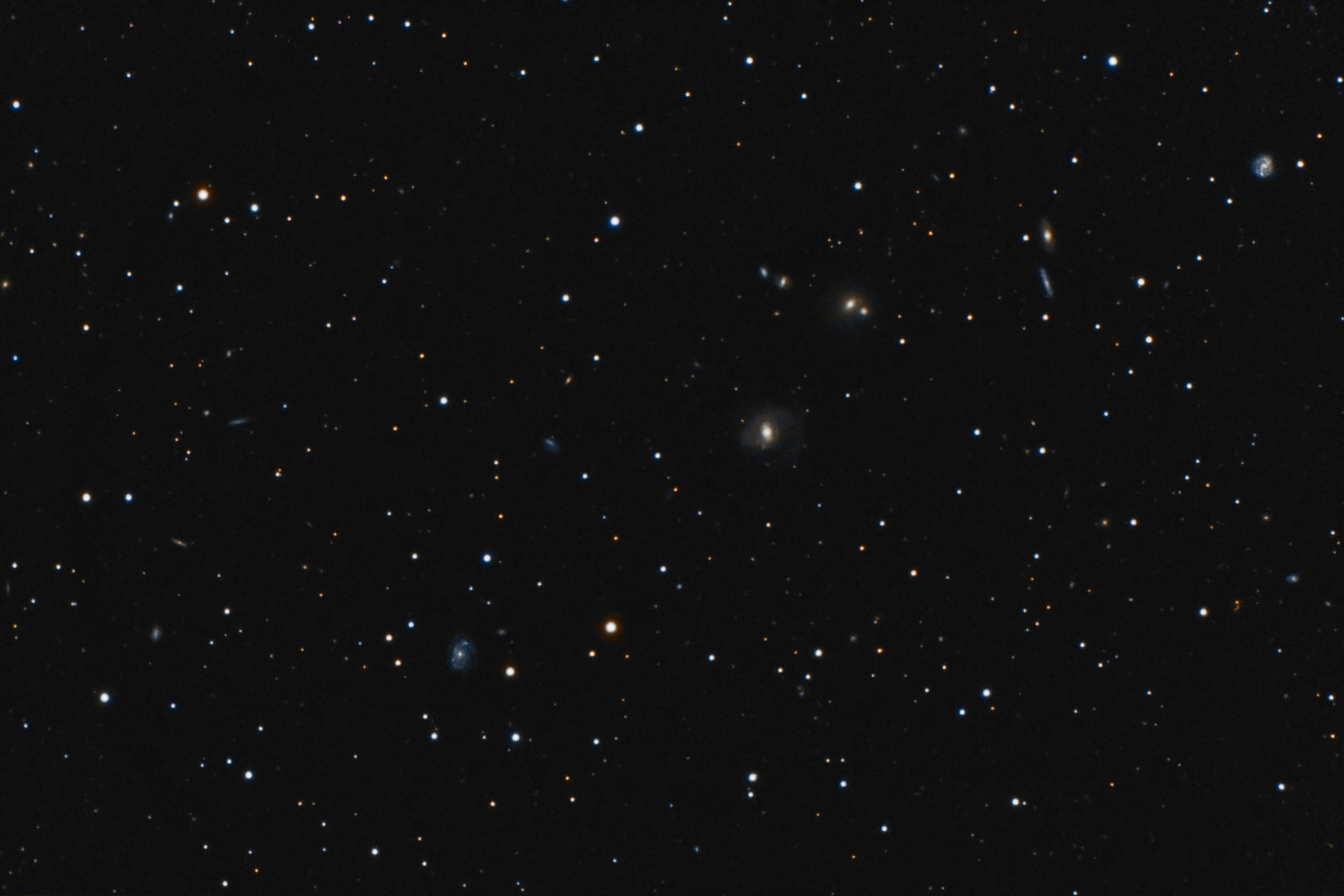