IC 3476 is a small, nearby irregular galaxy in the constellation of Coma Berenices south of M88 and M91. NED classes it as IB(s)m: with HII emission. Thus they consider it an irregular galaxy with a bar and slight spiral structure of the Magellanic type in which massive HII regions are giving birth to stars. Its redshift distance is meaningless as it has a blue shift (negative value) meaning it is moving toward us. It is located among the galaxies of the Virgo Galaxy Cluster a few of which do have negative redshift values due to the high gravitational forces within the cluster flinging galaxies around at high speed. This may be one of them. Tully-Fisher measurement shows it to be between 40 and 50 million light-years away so could be a true cluster member. Assuming a distance of 45 million light-years its diameter is about 27,500 light-years.

IC 3500 is on the lower left edge of my image. It is about 290 million light-years away, the most distant of the three IC galaxies. It seems to have an odd blob on its lower right side. I can\'t tell what is going on here. NED classes it as SBc which would have rather widely spaced arms. I don\'t see that here. I hoped the higher resolution of the Sloan Survey image would help but I still can\'t tell if this is just an oddly shaped arm or due to a second galaxy. Note the two bright blobs in this southwestern bulge. The smaller one furthest west is listed as a separate galaxy by the Sloan Survey and is about right for the core of a second spiral. NED, however, shows it as having a magnitude of 21.7 and it is far brighter than that in my image. Looking at the Sloan image it does appear far brighter as well. The position matches exactly. Still, NED and Sloan often identify obvious parts of a galaxy as a separate galaxy. This makes it hard to tell when they really mean it. Sometimes, not always, they have a note indicating such a galaxy is noted by several entries. That isn\'t the case here but also isn\'t always the case with obvious parts of galaxies as well. So I\'m still in the dark. No papers I found mention it as interacting with a second galaxy. This one will have to remain as indeterminate. It was discovered by Royal Frost on May 10, 1904.

Quite a few low surface brightness galaxies are in the image. Most have no redshift data but are in the VCC (Virgo Cluster Catalog). I\'ve noted them with their VCC number and a question mark when redshift data is not given.

There is a listed galaxy cluster north of IC 3476 in which the cluster position and the position of the Bright Cluster Galaxy are the same but the distances disagree listing 4.3 billion light-years for the cluster and 4.5 billion light years for the BCG. NED shows 11 galaxies in the cluster of undefined size. Apparently only the BCG is seen in my image. Though a blue quasar is nearby with almost exactly the same redshift as the BCG. Could it be in a member of this galaxy cluster? Seems likely.

There\'s one asteroid in the image and it\'s a bright one. (6383) Tokushima at an estimated magnitude of 16.2. It seems brighter than that to me. It\'s obvious in the upper left corner of the image. The green trace is hard to see as there\'s just no illumination in the background to let it be seen. 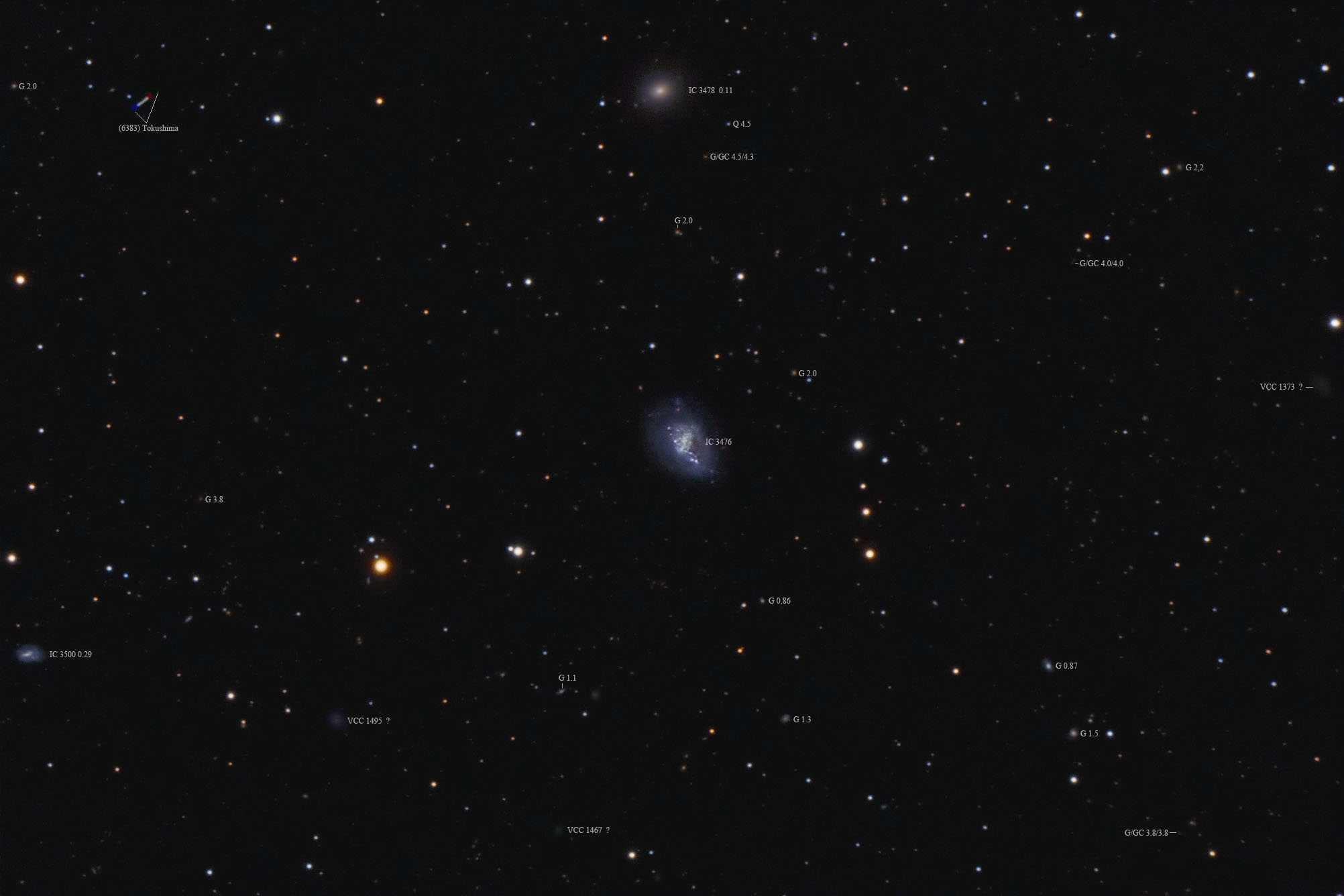 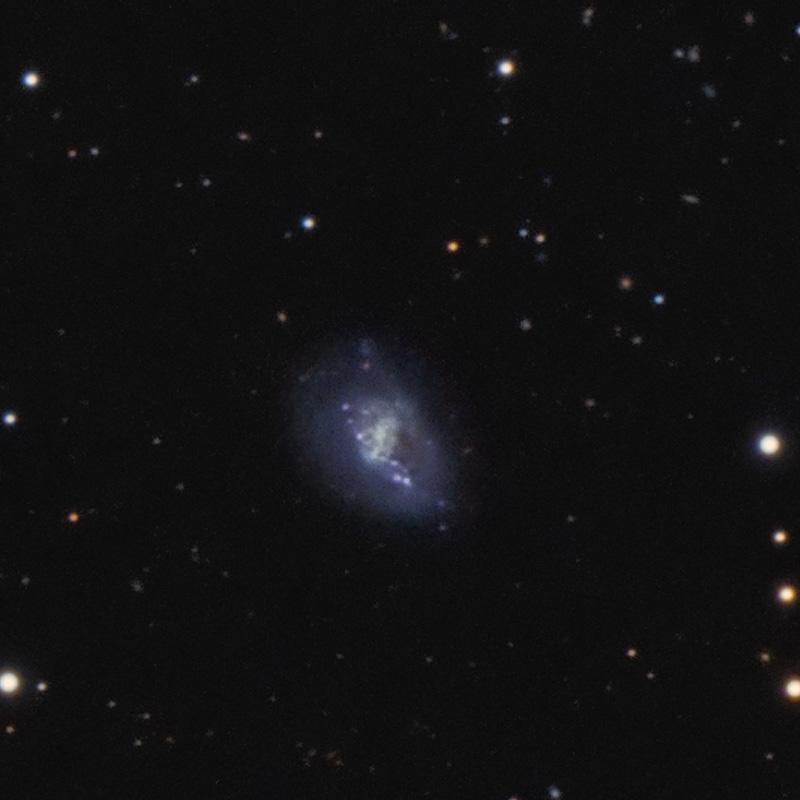 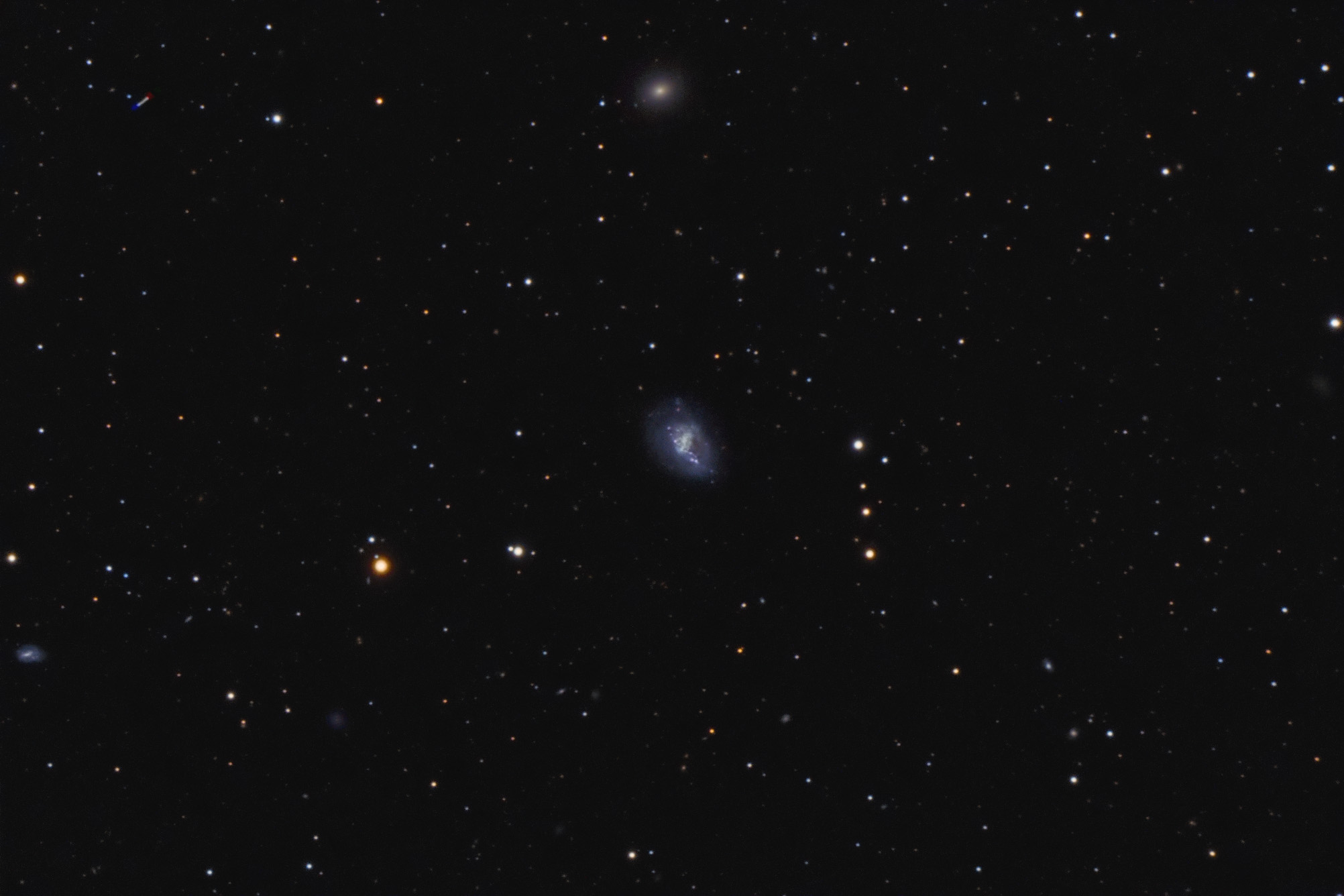