IC 4213 is a rather odd edge-on spiral in Canes Venatici in which no dust lane is seen. Even a core is rather missing consisting of just an area below center a bit redder than the rest of the galaxy. I make out no hint of spiral structure, just dark dust clouds and bright star clouds. It is listed by NED as a Scd: galaxy with HII emission. Its redshift distance is about 48 million light-years which means it should be within range of my H alpha filter. I should have tried it. Non-redshift measurements put it more like 64 million light-years distant. At such close range, redshift can be quite misleading. So I used the larger distance to estimate its size at 56,000 light-years. A rather typical size for a spiral. I wonder if seen face on it would be a rather flocculent galaxy. Even those usually have a dust lane which seems very absent in this galaxy. I did push the contrast a bit more than normal as it was very bland with my usual processing. Just a minor tweak and suddenly the contrast jumped far more than I expected. So I blended it back down to 50% and may have overdone it even then compared to what few images of it I can find on the net. The galaxy was discovered by Stephane Javelle on June 15, 1903. How did it escape galaxy hunters for so many years? It is magnitude 13.3 so not all that faint. Even Herschel should have picked it up.

I actually had two objects in mind when taking this one. In the lower right is UGC 8261 a really strange Im galaxy. NED says it has an eccentric nucleus which I take to be the slightly orange part a few seconds of arc northwest (upper right) of the center. It also has a really blue star cloud at the far left. It seems to outshine the rest of the galaxy. I\'d love to see what the HST could resolve it into. There\'s no mention of HII at NED but I wonder if it still has HII emission or has all that gas been used up in forming that ball of super hot blue stars or been blown away by their light pressure which must be quite strong. One paper I found says it is an emission line galaxy with a faint emission region, HS 1308+3845, that is probably what it calls a \"super association\". I take it that this is the blue object. Though if the name contains its coordinates they don\'t match those of the galaxy by several minutes of arc even if B1950 coordinates are used. Its redshift distance puts it at 50 million light-years, almost the same as IC 4213. This likely means they are related. With only two no redshift measurements at NED that vary from 59 to 144 million light-years they aren\'t of much help.

Below it is the much more distant LEDA 214085 which appears to be just a smudge with no hint of detail. It\'s blue so not likely an elliptical or SO galaxy. I found nothing to categorize it.

Several possible quasars are in the image */Q means it is most likely a star but could be a quasar. CQ stands for Candidate Quasar. Both have only sometimes unreliable photographic redshift values. 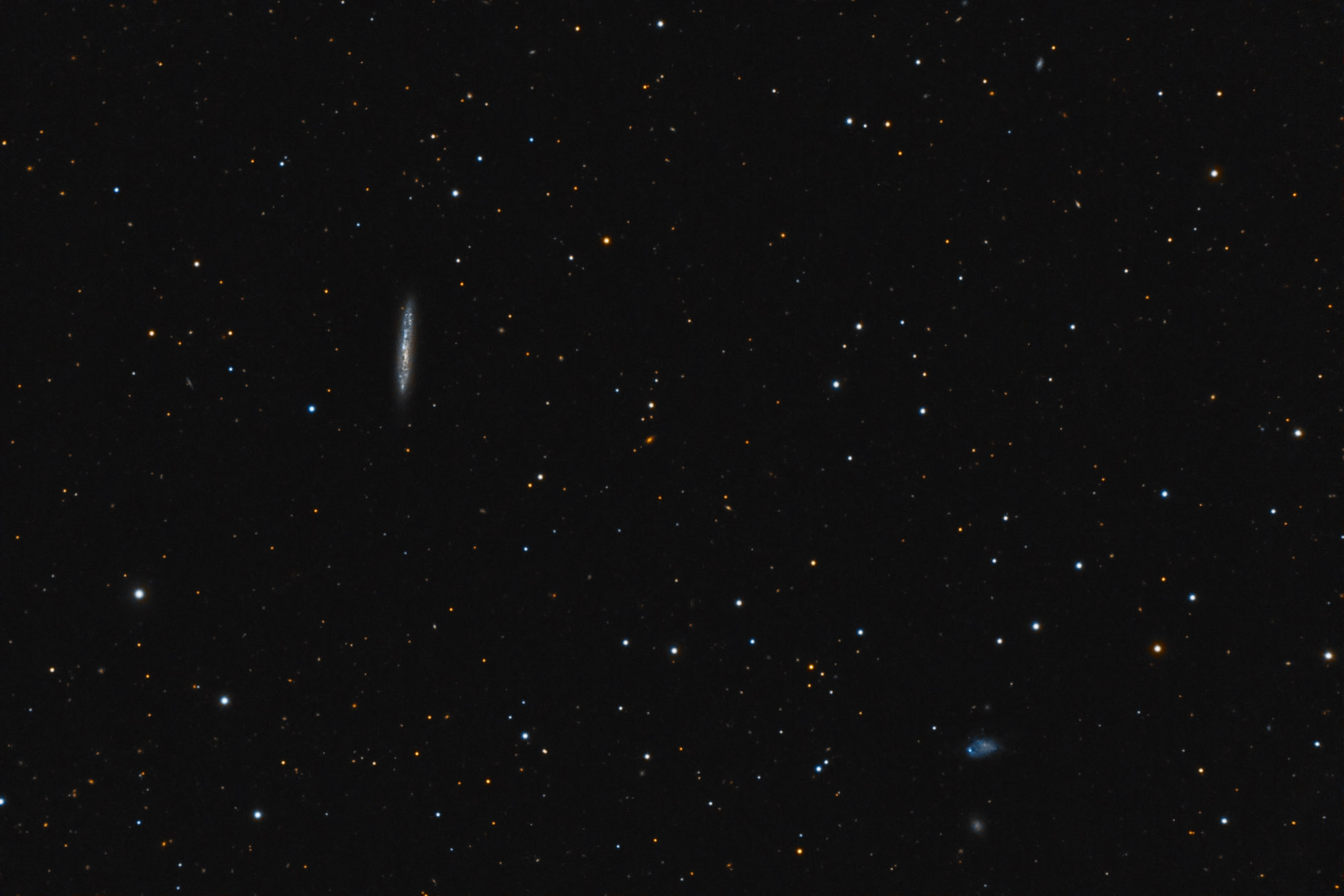 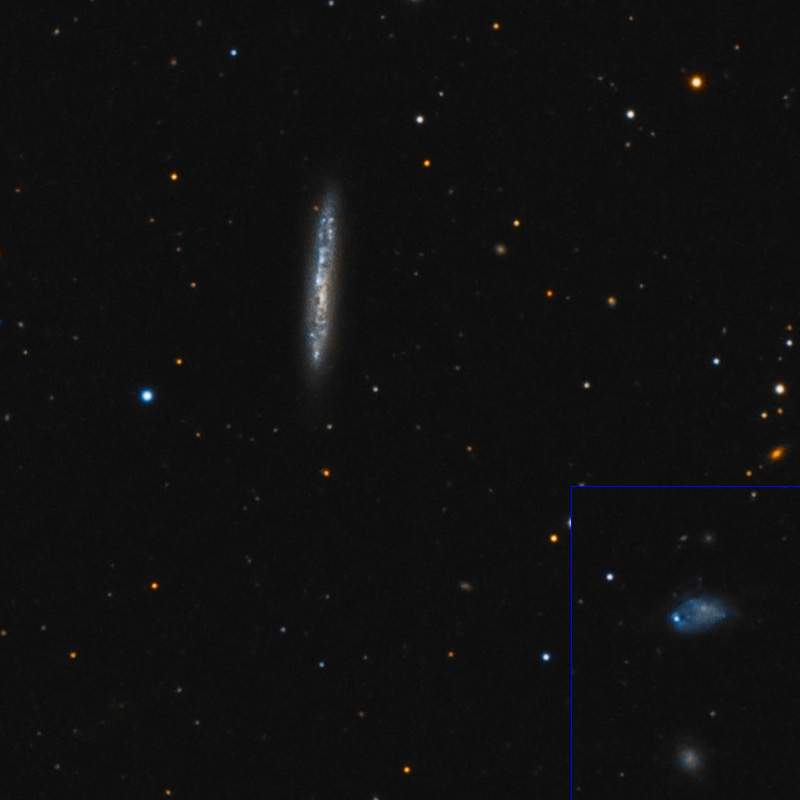 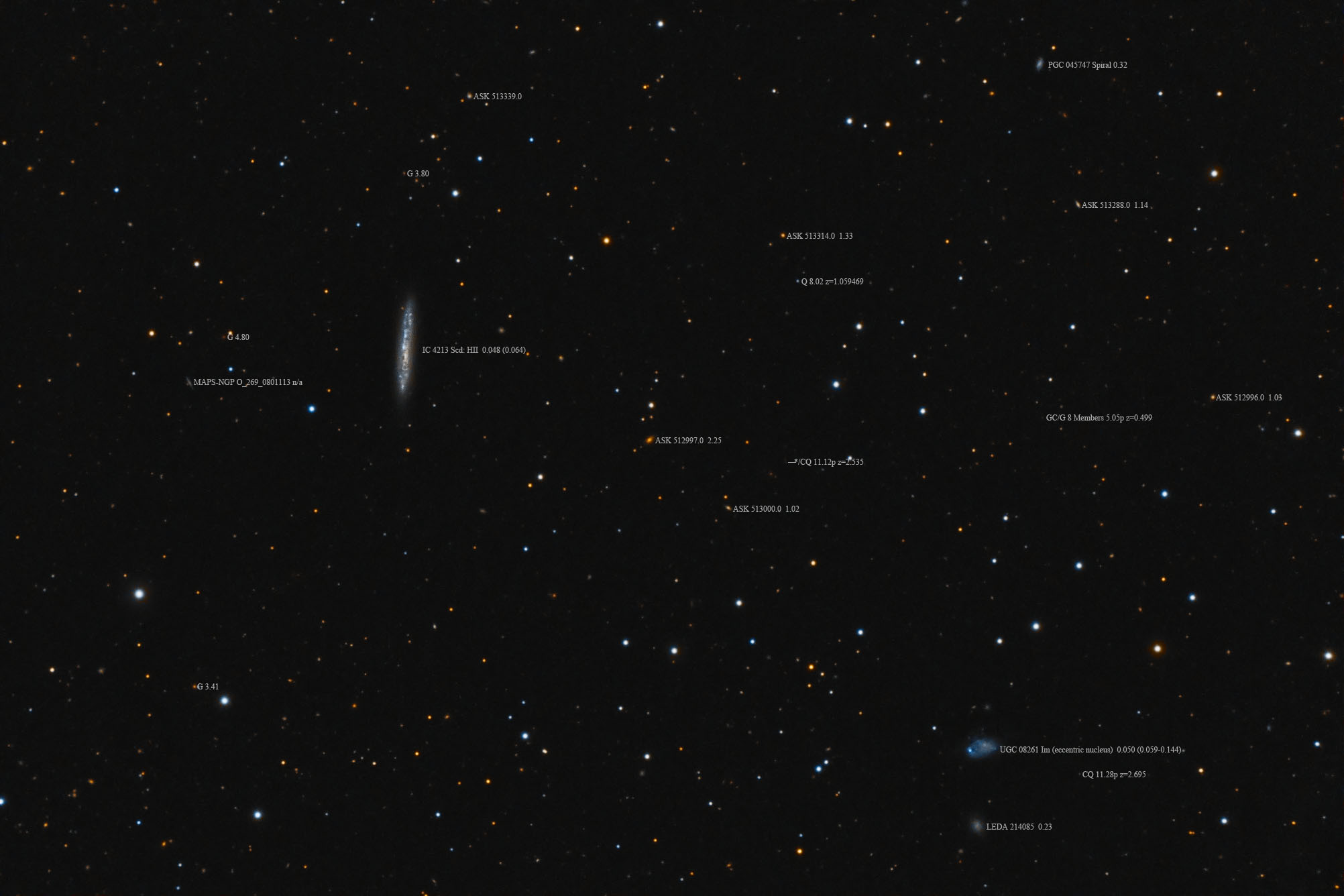