IC 4630 was suggested to me by Sakib Rasool. It is a spiral starburst galaxy which is likely the result of a merger in progress -- SIMBAD considers it two galaxies while NED sees only one as I do. Though the plumes indicate it is the result of a merger. A merger some feel is still going on. It is a mostly white galaxy with two plumes. NED classes it as S? It is located in Hercules below the keystone at a distance of a bit under a half billion light-years. Besides the plumes, it has a nearly complete arc around a bright core. I find little on it other than it is included in many papers about mergers in progress. The annotated image shows a number of related galaxies at its redshift. Most are smaller galaxies. I\'ve annotated them by catalog entry rather than the generic G or Q used for the rest. With so many in the immediate area, it\'s not much of a stretch to think this galaxy has been feeding on its dwarf neighbors for a long time. IC 4630 was discovered by Stephane Javelle on July 27, 1903.

I got a surprise when I looked at the first image as it came in as there was a bad reflection in the upper left corner. I moved the scope slightly but it was still there. Reflections move or vanish when the scope\'s aim is changed slightly. I let it go expecting to remove it during processing. That was last June. Before I took it out when processing the image I checked the Sloan image of the area and there was the \"reflection\" just as it appeared in my image. Like IC 4630 it was quite white in color on the Sloan image. So it is real. Real what I don\'t know. Neither NED nor SIMBAD shows anything in that position. It likely is a small piece of rather bright IFN. I see some hints of other pieces throughout the frame, just much fainter.

As happens rather often there was what appeared as a trio of interacting galaxies due east (left) of IC 4630 about two-thirds of the way to the edge. Neither NED nor SIMBAD shows anything at their location. The Sloan Survey image shows it is real and very blue. Could be either a single rather disrupted looking irregular galaxy or two or three superimposed blue galaxies. Two other faint fuzzies I was interested in are also missing from both NED and SIMBAD. All are noted with a question mark in the annotated image.

Also in the upper left corner and well within the mystery \"reflection\" is this entry \"GC/C 4 or 6 Members 4.14p/3.58\". NED shows two galaxy clusters at almost the exact same position with an error circle sufficient to include both. One has a photographic distance based on photometric data, the other uses spectroscopic data. Are they the same cluster or two different ones? Another much larger one at 3.67 billion light-years is in the area. Does it include the other two? NED lists no size for any other than galaxy count. It appears I\'m not picking up but a very few of the cluster member other than the anchoring bright cluster galaxies. 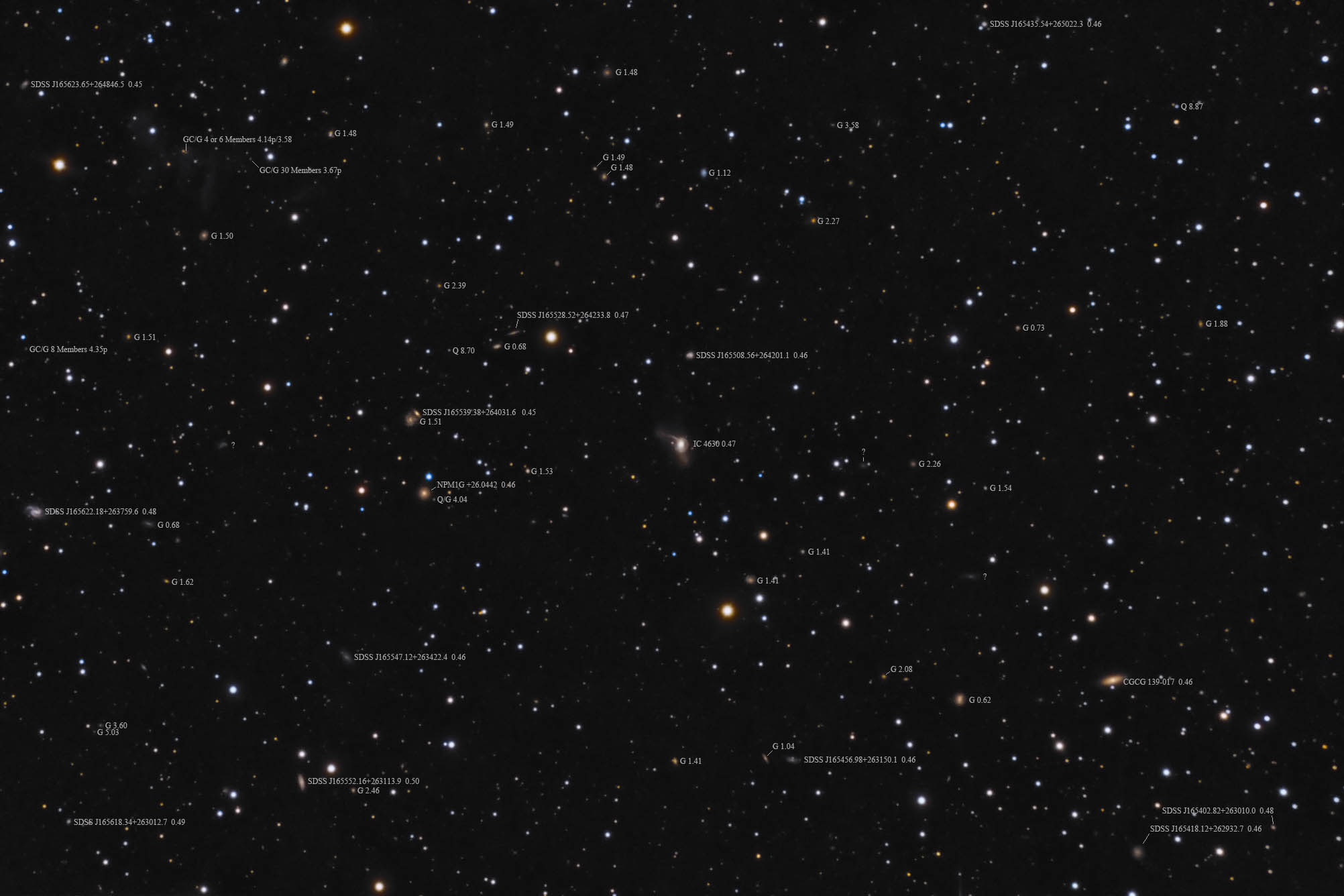 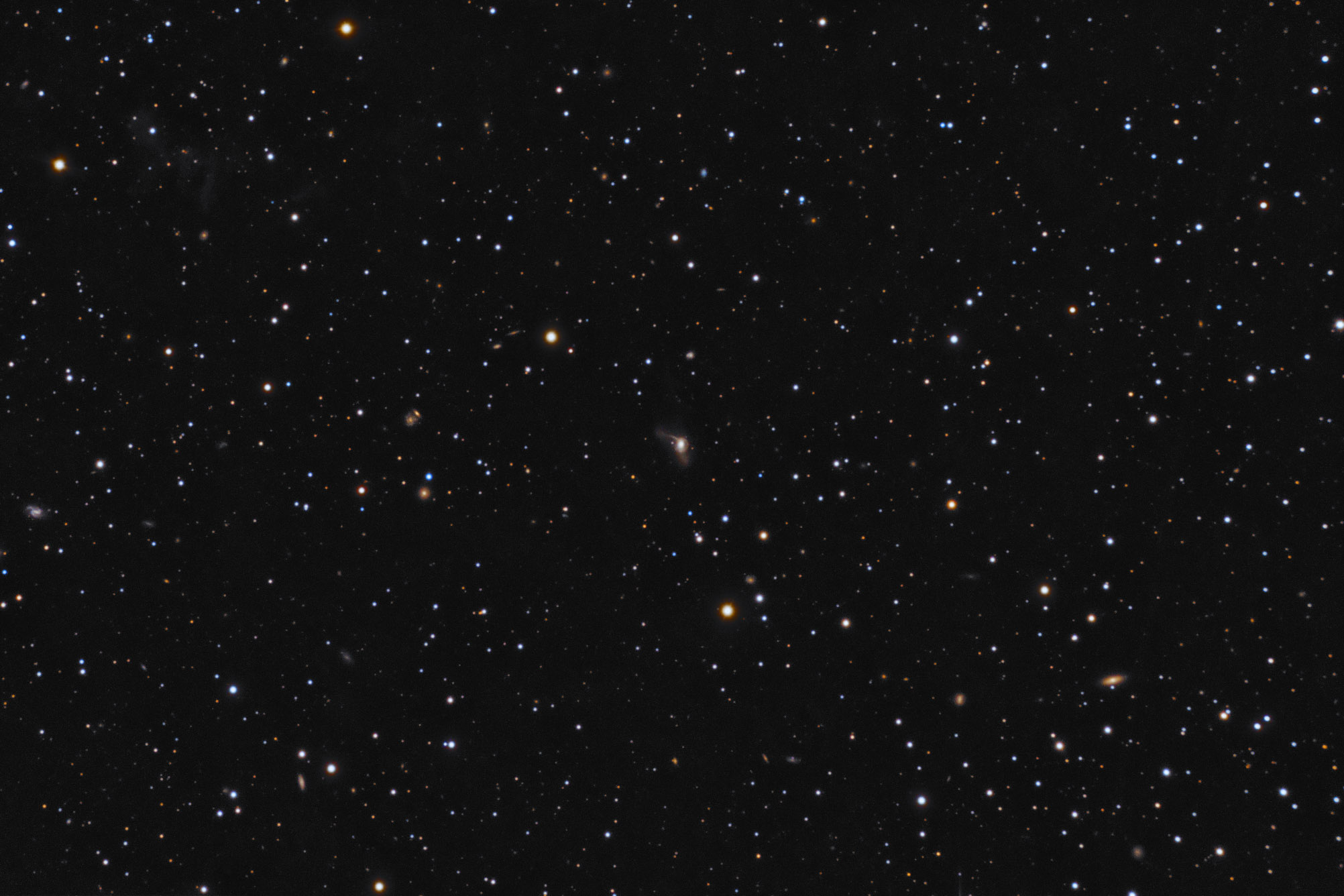 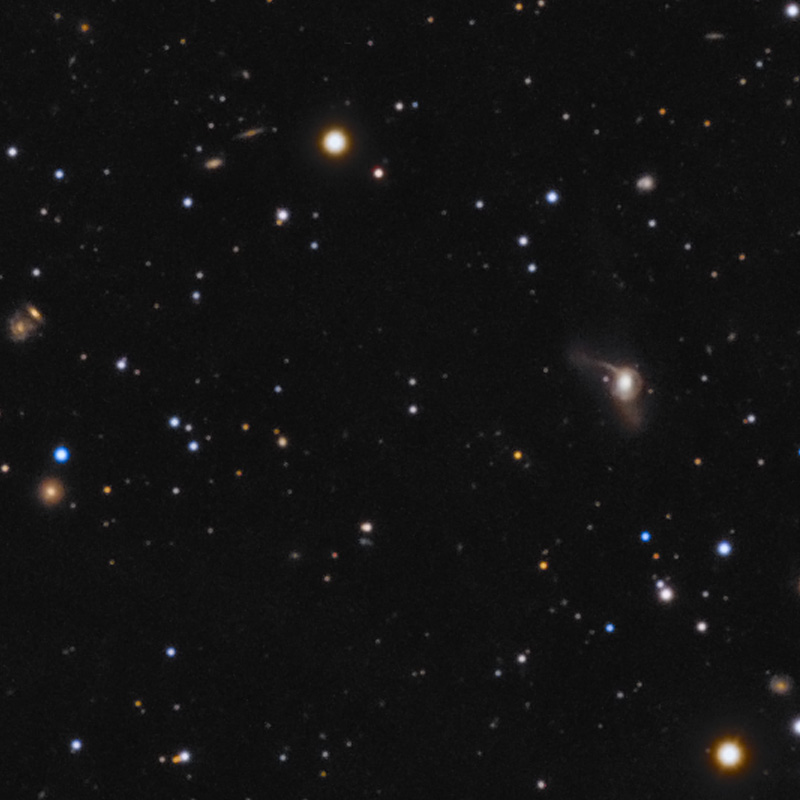 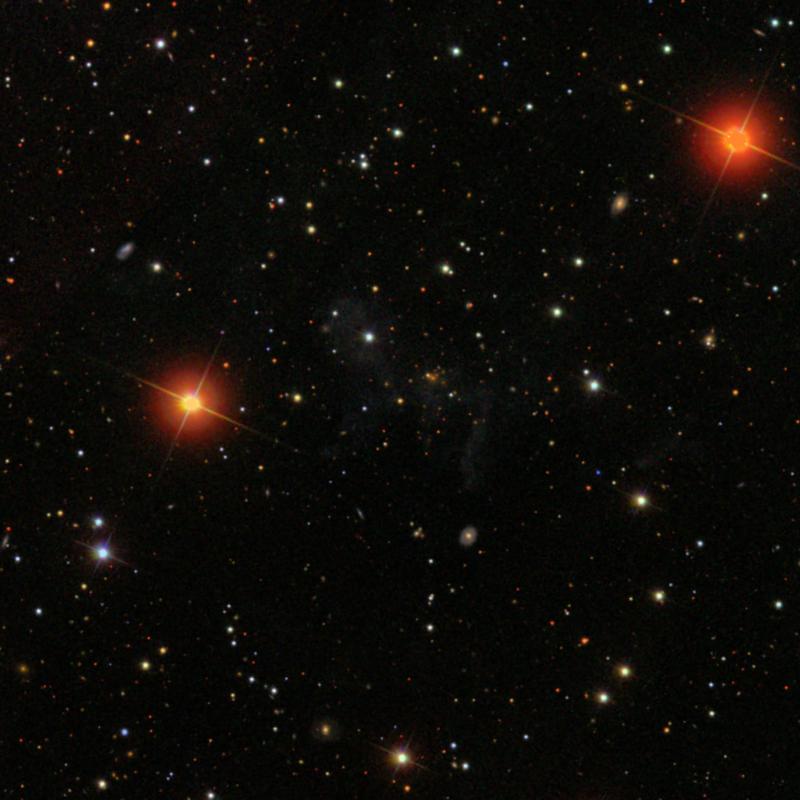