IC 5146 is commonly known as the Cocoon Nebula. It is located about 4000 light-years away and is seen against the Milky Way in Cygnus the swan. Nebulas can be either reflection nebula in which they shine because starlight is illuminating them same as the sun illuminates the Earth or because strong ultraviolet light excites the gasses it is made of to glow much like electricity causes a neon light to glow. There\'s a third possibility, the gasses and dust block and/or absorb light making a dark nebula. All three are going on here.

First off the gas and dust in this area is condensing into what will become a major open star cluster given enough time. Right now most of the stars are hidden behind the dust and gas creating them and can be seen mostly in infrared light which can penetrate the dust. But in the center, a very massive cluster star formed near the edge and blew a hole allowing us to look in a bit. This is the bright star in its center. I say bright but at magnitude 9.7 it is nearly 100 times fainter than a 5th magnitude star seen by the unaided eye. It is very massive however and is classed as a B1V star. It is known as BD+46 3474. B1V stars emit a lot of light, more in ultraviolet than visual light but still, the visual light is tremendous. The result is the UV light causes the hydrogen gas on the edges of the cloud to glow due to hydrogen-alpha emission. It also is illuminating the surface of the cloud but this light is mostly lost to the much stronger hydrogen-alpha emission. But at the edges, the UV light is too weak to ionize the hydrogen. There we see the blue of the reflection nebula where it doesn\'t have to compete with the hydrogen-alpha emission. Notice around the illuminating center star other stars are seen. These are likely seen through the hole the B1V star has created letting us see a very few of the more normal cluster stars.

Harder to see, due to my limited field of view, is that this nebula is actually much larger than the reflection and emission nebula. There not enough light exists so it is dark and seen only because of the background stars it hides. It is known as Barnard 168. It extends several degrees, mostly to the upper right of my image. Wide field images show it almost like a dark comet tail coming from this bright nebula.

Also, the dark bands are seen in the bright nebula, but for the center hole, are due to the hydrogen gas absorbing the UV light that would otherwise cause the nebula to glow. This is because the gas is too dense to glow with hydrogen-alpha emission. There\'s a lot going on in this object.

Unfortunately, I took this right after I started doing color imaging and before I knew what I was doing. I need to dig out the original FITS files and reprocess it with today\'s tools. Back in 2007 when this was taken I ended up processing it two ways, one too gentle and one too harsh. Also, I didn\'t know how to preserve star colors so most are too saturated to show color except around the edges. It is in need of correct processing but this old image will do for now. I\'ve included 2 versions, neither what I would do if I had the original data handy to work with. It was discovered by Max Wolf on July 28, 1894.

Many images you see of this one use narrowband filters to isolate the hydrogen, oxygen and sulfur that cause this nebula to glow. Then RGB data is added to pick up the reflection parts. Only having a hydrogen filer this is a pure LRGB wideband image. The hydrogen emission seemed plenty strong without resorting to narrowband filters as those located under light polluted skies have to do. but I used 3 times more luminance data than I usually do. Not so much because it was needed but because I didn\'t know it wasn\'t really necessary. I did use my normal amount of color data however which is rather strange. Shows my state of ignorance all those years ago. 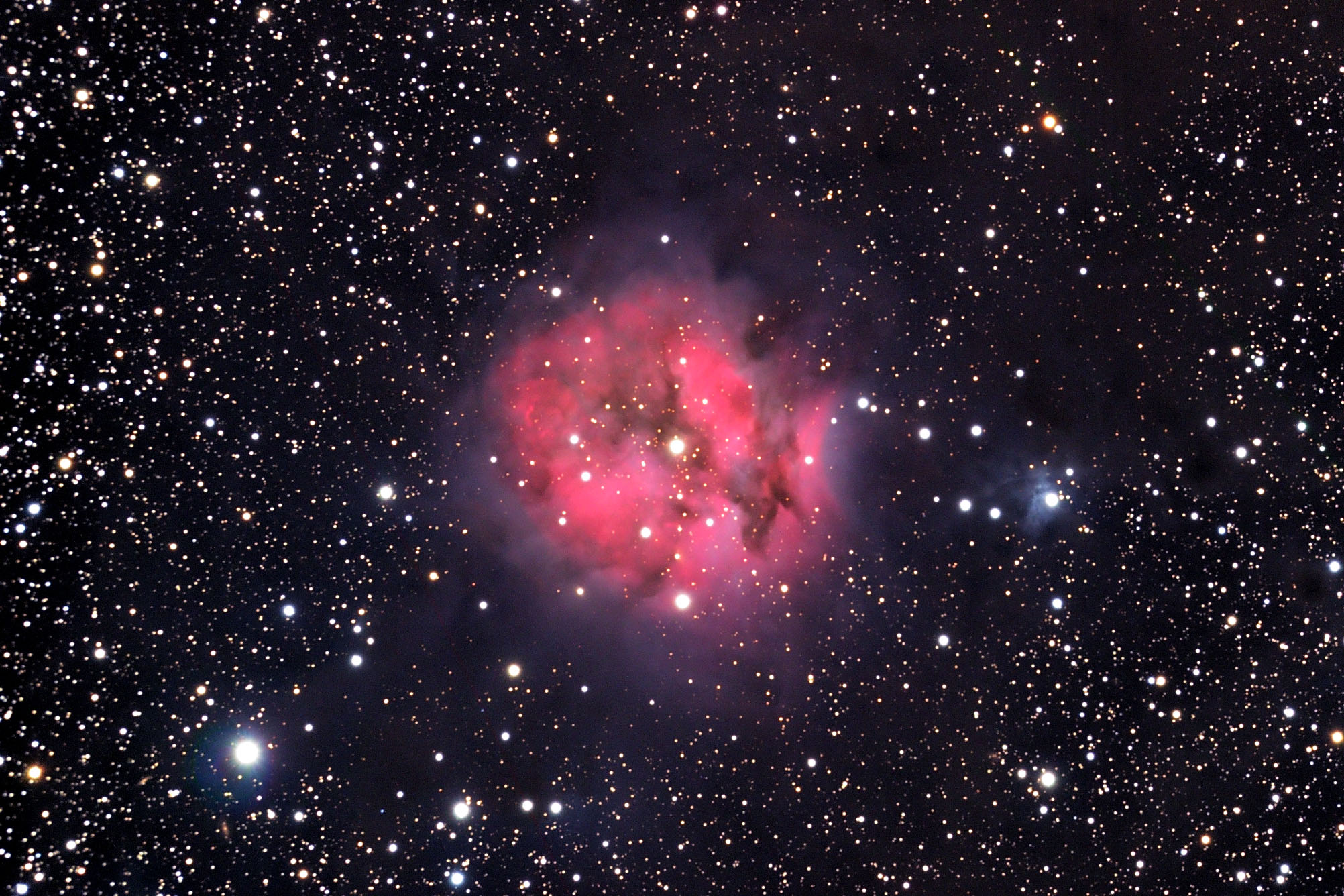