IIZw28 is a small empty ring galaxy in Orion just east of the bottom of his shield. Rings of its type are thought to be caused by a small dense galaxy colliding with a disk galaxy almost perfectly face on like a bullet hitting a target. This blows the core to the edge of the ring. Usually, the \"bullet\" galaxy is quite obvious. Here there\'s no apparent \"bullet\" galaxy. Since the ring is thought to be a rather short-lived condition it should be nearby. One possibility is that the dense northern part of the ring is due to the superposition of the \"bullet\" galaxy and the displaced core. A note at NED says the galaxy has three distinct stellar populations; \"...young stars in the ring, A-stars which are distributed inside the ring (this is strong evidence for the passage of the wave) and an old stellar population in the edge of the ring. It is thus very likely that the companion (is) seen in projection like in NGC 985.\" The mentioned NGC 985 is at -8 degrees and so far has been in too poor of seeing each time I tried for it. Maybe next year. It is more distant yet about twice the angular size of IIZw28. I measure the size of IIZw28 at 33,000 light-years so it is a small galaxy and target for the bullet galaxy to hit (maybe it has a lot of dark matter to draw in the bullet galaxy).

The field has quite a few distant galaxies in it but only 4 others have redshift data. Interestingly they appear in pairs. One pair close then IIZw28 at 220 million light-years and a more distant pair at 720 million light-years. NED identifies only a handful of other galaxies in the field. I\'ve annotated all of them leaving the vast majority as unknown.

The northern galaxy at 220 million light-years carries the odd designation in NED as MS 0459.5+0327 Clump. I have no idea what is meant by \"Clump\". Its position had a rather large error bar so I can\'t tell if it is indicating the entire blue object or just the northern or southern part. To me, it appears to be two superimposed objects but may be one. Its size is smaller than the error bar of its position. The MS catalog is of objects discovered by the Einstein orbiting X-Ray observatory. The first true X-ray telescope put in space so it is no wonder the position is somewhat crude. In fact, it is darned accurate for the technology of 1978 when it was put into space. Apparently, there\'s been no followup on this object. At least I didn\'t find any.

This image is the result of several attempts from November 2013 through late January 2014. Seeing varied greatly. Since each color was taken a different night there\'s more color error in the star disks with various color fringes showing. This also made color correction difficult. I think it is correct in general but not up to my usual standards. 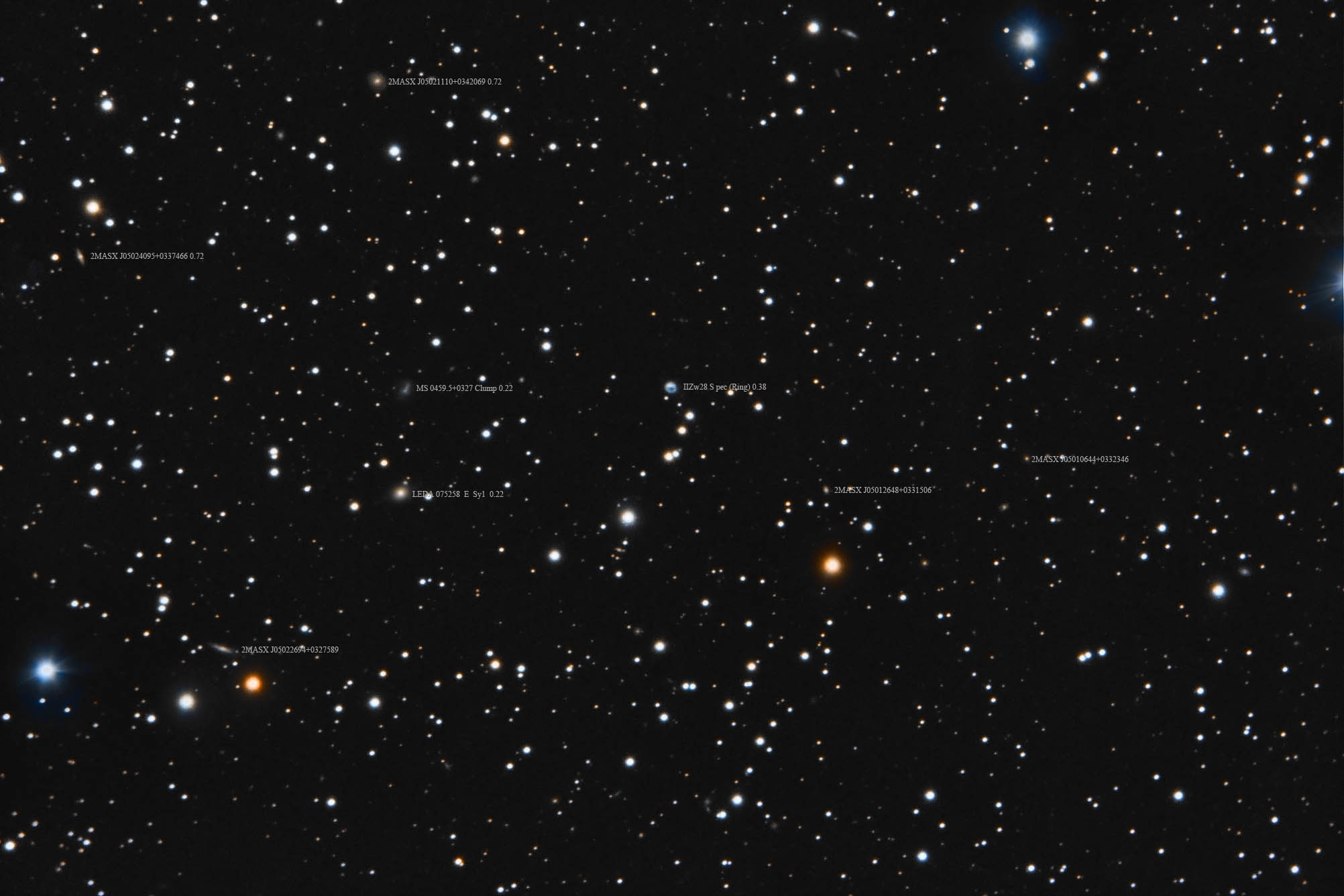 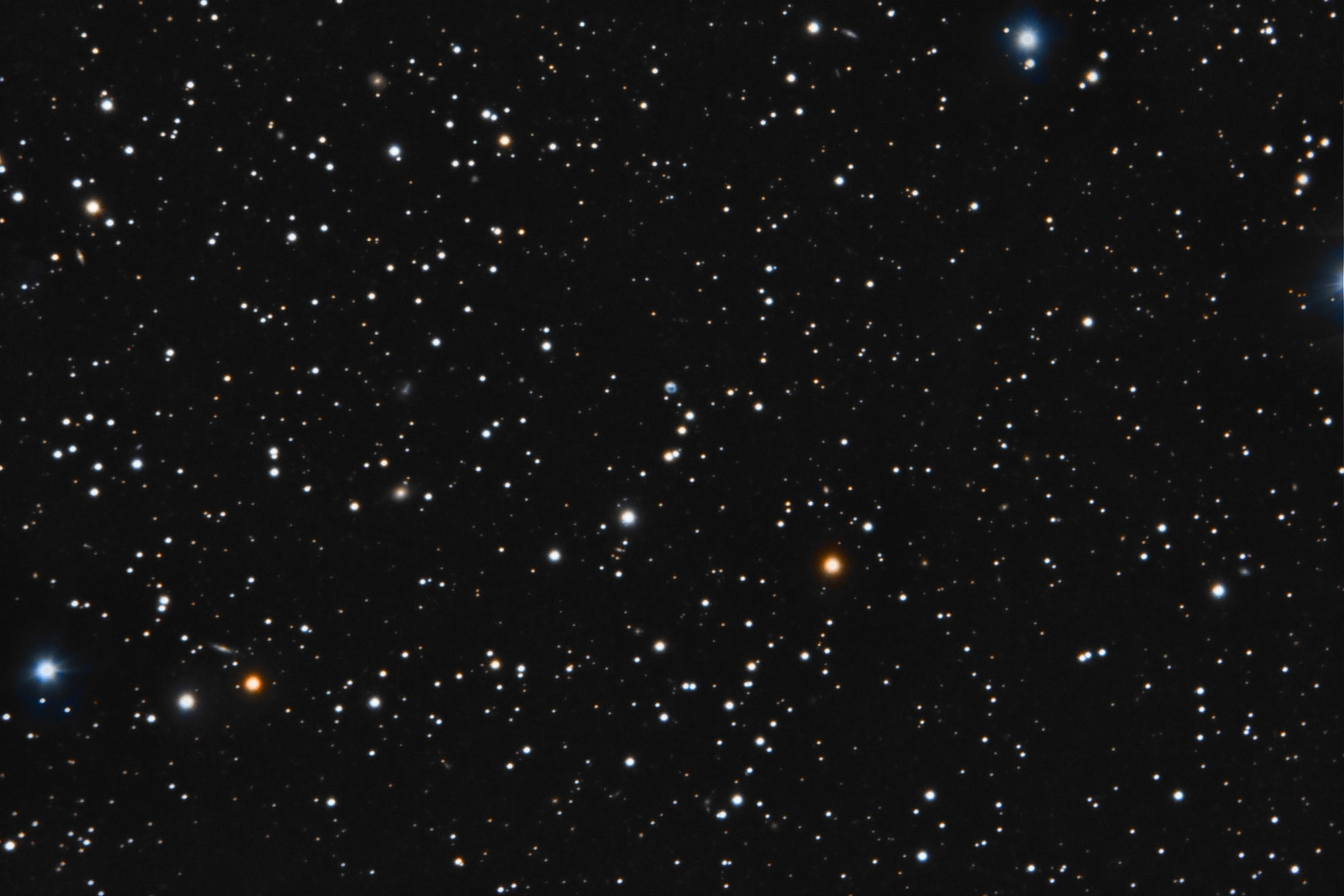 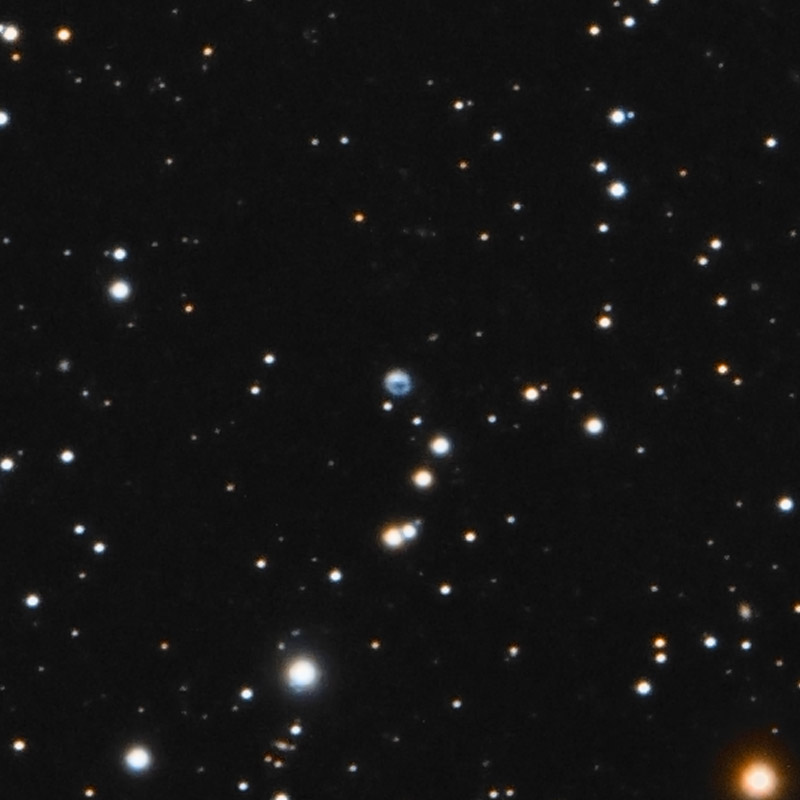