I bet this is one few if any of you have heard of. I hadn\'t either until Sakib Rasool suggested it. KTG stands for \"Karachentsev Isolated Triplets of Galaxies Catalogue\" Though it appears there are 4 maybe 5 in this group. It is in Hercules about 140 million light-years from us according to its redshift.

KTG67 officially consists of three galaxies, NGC 6484 on the west, UGC 11027 to the northeast and UGC 11029 furthest east. Nearly directly east from NGC 6484 is a pair of similar small disk galaxies situated almost at right angles to each other. They are UGC 11010. The lower is MCG +04-42-011 and the upper, nearly vertical one is MCG +04-42-010. Only the latter has a redshift distance which is also about 140 million light-years. I can\'t tell if the southerly one is a fifth member or not as NED had no distance data on it.

The main reason for imaging this group is UGC 11027 a rather \"sloshed\" galaxy. The stereotypical sloshed galaxy is NGC 5474 near M101. This term applies to the off-center core. Often it really isn\'t off center by much, it\'s just that the disk stars on one side are very faint compared to those on the other side. That\'s the case with NGC 5474. My image isn\'t deep enough to say if that\'s the case here. Though I see no hint of a faint disk to the south and southwest to match the rest of the disk.

A note at NED is rather confusing. It says: \"Bright red condensation 0.45 x 0.25 in south-following part, superimposed companion?\" Confusing in that I see no hint of this object in my image nor the recently released expanded Sloan Survey image. The note is from the original release of the UGC catalog. NED classes it as Im meaning an irregular galaxy. Looks to me like a barred spiral with one part missing. It could very well be a merger situation, however. There are some bright knots on the eastern side that could be the remains of a merging galaxy.

UGC 11029 is classed as an SBd spiral. It does look quite typical of a many-armed spiral and thus likely not recently disturbed by its neighbors.

NGC 6484 may at first appear a rather normal barred spiral with two wide arms. But to me, it is very odd. First off, while the core is elongated as you\'d expect in a typical barred spiral there is no obvious bar. In fact, it is classed as Sb? at NED. While one arm comes from an end of the core\'s elongation the other starts out of nowhere well away from the core. Also, the arms have an odd symmetry. Each has a pair of bright blue star clouds directly across the core from each other. Then further down the spiral arms are a line of fainter blue star clouds also opposite each other across the core. Coincidence or is there something behind the scenes causing this? I have no idea. There is also a short plume going to the southwest. This left over from some long-ago interaction? It was discovered by Truman Safford on July 11, 1866. 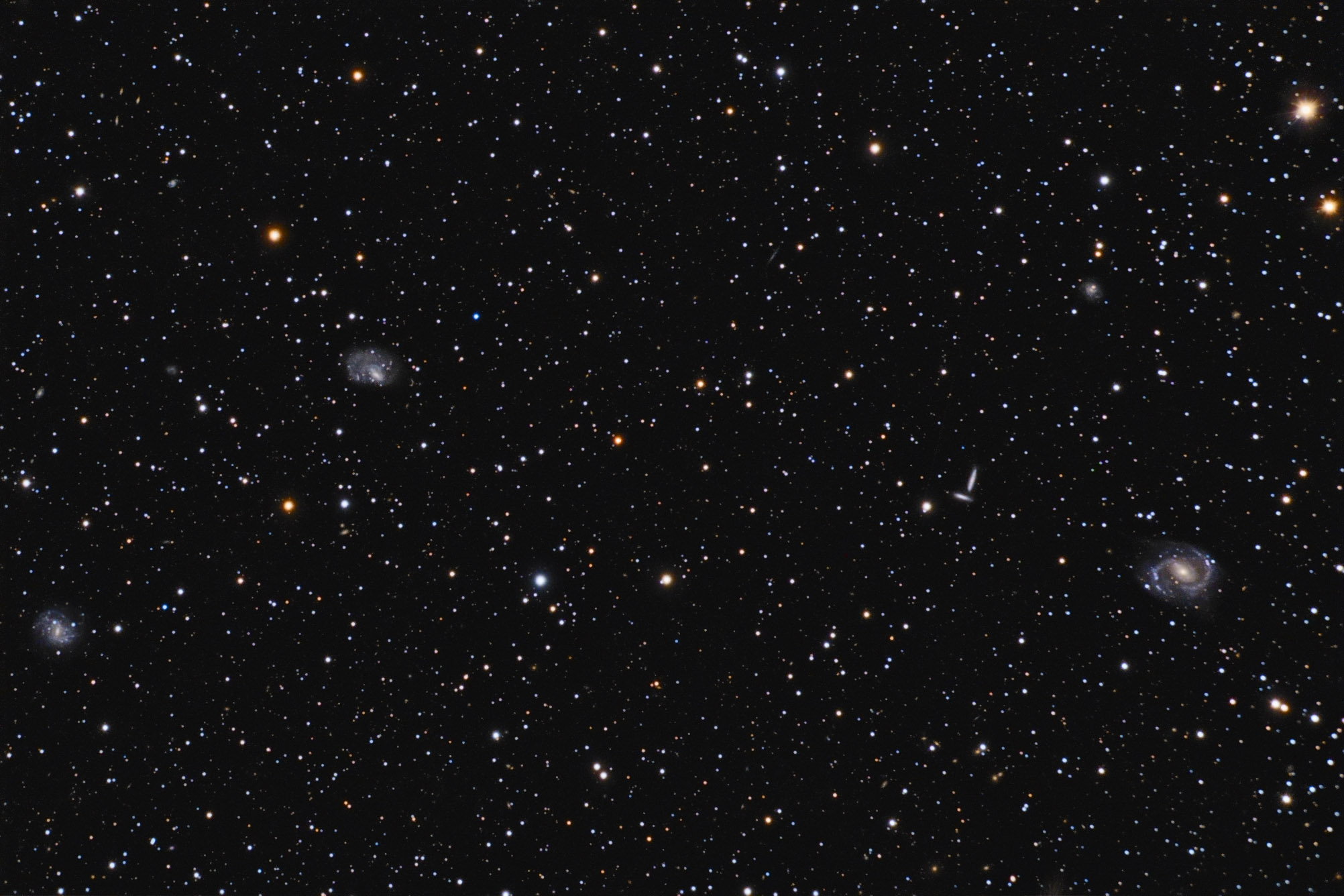