MRK 0231 is a very active galaxy in Ursa Major a bit less than a degree north of Alioth the star in the handle of the Big Dipper before the bowl. NED classifies it as SA(rs)c? pec; LIRG; SY1 Which says it is a luminous infrared galaxy with a Seyfert 1 nucleus. This is one step down from a quasar. Some papers call it a BAL quasar. BAL stands for Broad Absorption Line. Some say it is a starburst galaxy due to its strong IR emission others say this is just a characteristic of the very well fed black hole at its core. In any case, this has to be the result of a nearly complete merger of two equal sized spiral galaxies. The AGN gives it a star-like core. So star-like the core appears to be a bright star. It gave me fits to process it in fact. The core is 10 times brighter than the disk of the galaxy just one second of arc away. I\'ve never encountered a galaxy with such a powerful star-like core, especially one over a half billion light-years away.

This is a very well studied galaxy. Most major galaxies will have up to a dozen notes at NED. This one has 29 nearly all quite lengthy. I can\'t begin to recap them. If interested look this galaxy up at NED then click on the notes link, put on your hip waders and wade in. Many of the papers can be downloaded in their entirety. For a more readable article including an image of it by the Hubble space telescope (south up so rotated 180 degrees from my north up image) see: http://www.skyandtelescope.com/astronomy-news/spotting-nearby-quasars-winds/

Outside the star-like core to the south is a bright arc of stars not quite centered on the core. This may be due to the merging of two cores to make this galaxy or it could be caused by the outflow mentioned in the article above. To the southwest is a much larger ring with 5 or 6 star clouds in it. Large, very faint plumes are seen to the south, east and a finely defined one to the north ending in a blob. It looks much like a distant galaxy but is not listed at NED at all, not even as part of a galaxy. I didn\'t really know what to make of it until I saw the HST image at the Sky and Telescope link above. It is a distant edge on galaxy, just not one listed at NED. The HST image is oriented south up so is upside down compared to mine with north at the top.

The bright disk portion of the galaxy is about 85,000 light-years across. A rather good size galaxy. The plumes, while weak, give it a diameter of over 300,000 light-years. Much of the plume volume appears to be very weak in stars. Does this mean most have fallen back into the disk of the galaxy? I found nothing on why the plumes were so weak other than suggestions that it is due to the merger being virtually complete. So have all the bright stars in the plumes died leaving only faint ones? Unfortunately, the plumes are very weak and conditions were poor when I collected the color data. The plumes appear to be very red in some areas but slightly blue overall. This might fit with the age of the merger being long enough ago the hot bright blue stars have since died leaving mostly low luminance older stars. I just don\'t trust my color data enough to say. It was extremely weak and was pushed beyond reason.

How Arp missed including this one in his list I can\'t understand. Also, Arp was fascinated by quasars near disturbed galaxies. He didn\'t buy the generally held view that the redshifts of quasars were due to the distance and the expansion of the universe. He thought they were ejected from active galaxies. In this case, there are 14 quasars (one a bit iffy) in the image. I didn\'t list the quasar candidates in the frame. That would have brought the total to nearly 30. I have my doubts many of these will prove to be real quasars so didn\'t include them. In any case, NED had only 17 galaxies in the field with redshift and 14 quasars. I\'ve never had a field with a ratio like that and the total quasar count is a record for my images I believe. I have to wonder what Arp would have made of their abundance around such an active peculiar galaxy! Did he know about it? Wish I knew. 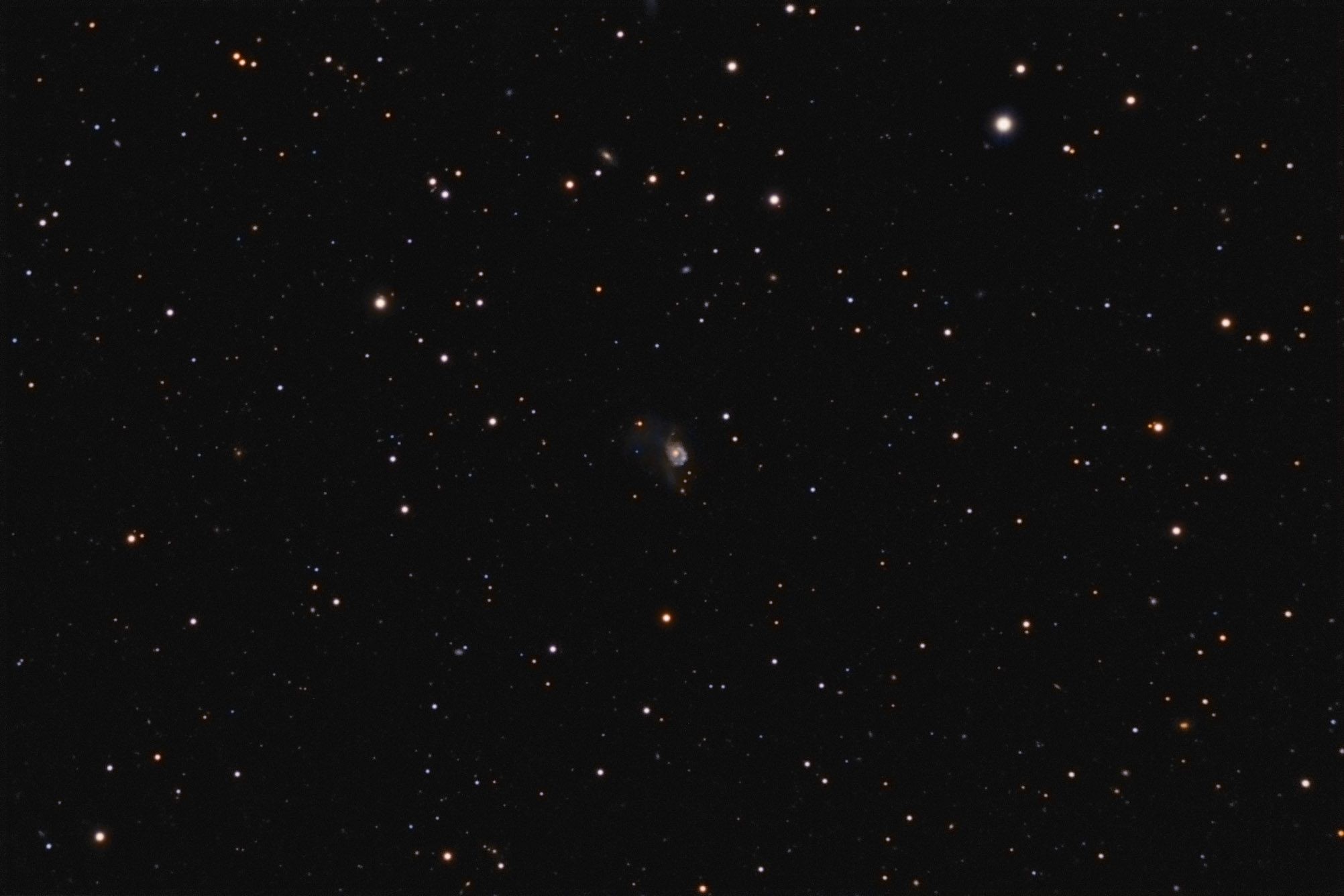 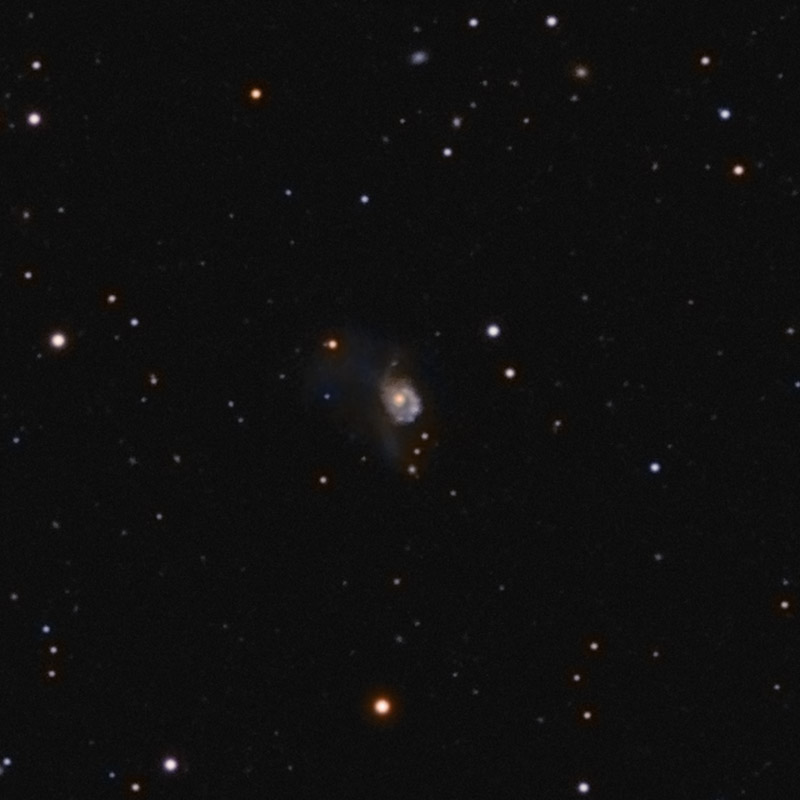 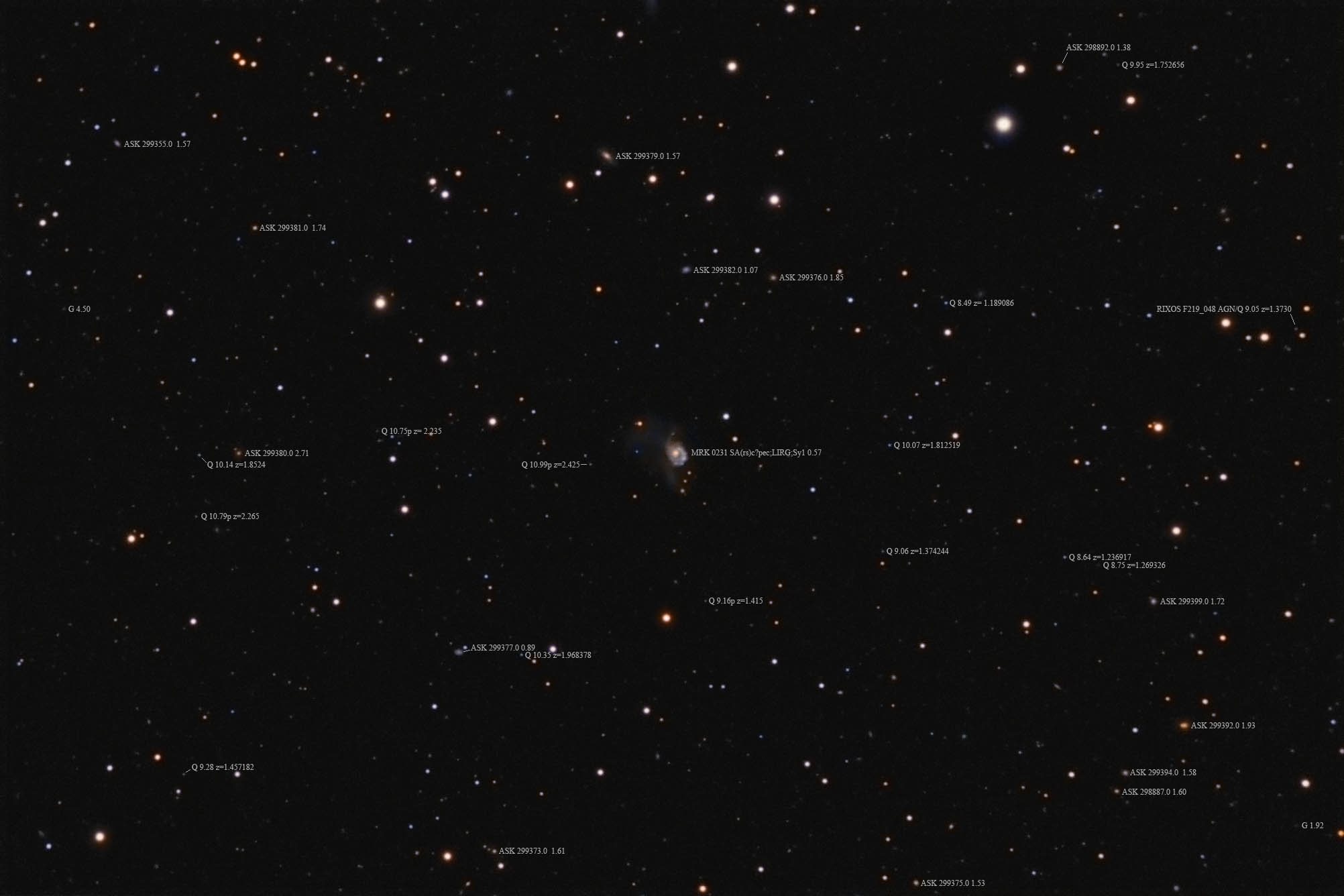