This is an intentional image of asteroids. I was fortunate to go to high school with Pete Schultz. We helped form the Prairie Astronomy Club in 1961 we did a lot of astrophotography together from a cow pasture south of Lincoln Nebraska. I found many cowpies the hard way, he seemed to avoid them. He worked for a camera store and would show up with some really nice gear the store let him field test. So he was using thousands of dollars worth of gear while I was using home made stuff and el cheapo cameras and lenses scrounged from the used bin at camera stores. Now he shoots holes in comets (Deep Impact) and the moon \"LCROSS) and gets sued by a Russian astrologer for ruining her so called forecasts. I wish I was kidding, but he no longer attends conferences in Russia for fear of being arrested.

This June (2010) we were both giving talks at the same gathering. As usual his was better and far more exciting as he used a gun to create craters that perfectly modeled ejecta trajectories of known impacts. These showed why LCROSS\' change of target at the last minute prevented the impact from being seen from earth. He still has the same energy he had over 50 years ago. Wish I did. My grown son\'s comment about our talks was \"Neat Dad but your friend was AWESOME!\" He was, I have to agree. Anyway, he told me that he has an asteroid named after him so I had to give a go at imaging it for him.

I tried taking his asteroid last summer but it was lost in dense Milky Way and further away so much fainter. Conditions were much better this year. It was against a far less dense star field and a couple magnitudes brighter at magnitude 17.3.

These are all estimated magnitudes by the minor planet center. Sometimes I find I disagree with their estimates but these seem quite reasonable compared to my data. Sorry Pete -- you weren\'t the brightest in the field.

The naming citation for his asteroid reads:
\"Peter H. Schultz, a geologist at Brown University, has studied cratering phenomena experimentally and in the field. He has played a major role in defining and developing the Deep Impact mission, particularly through his cratering experiments at the NASA Ames Vertical Gun Range.\"

I\'m encluding a picture from the 2010 of Pete (left) and me on the right. The fellow in the middle is Jack Dunn the local planetarium director at the time (since retired). Pete\'s the oldest and the only one not retired.

The still and annotated images are attached. None of the galaxies in the image had red shift data available so only the asteroids are pointed out on the annotated image. 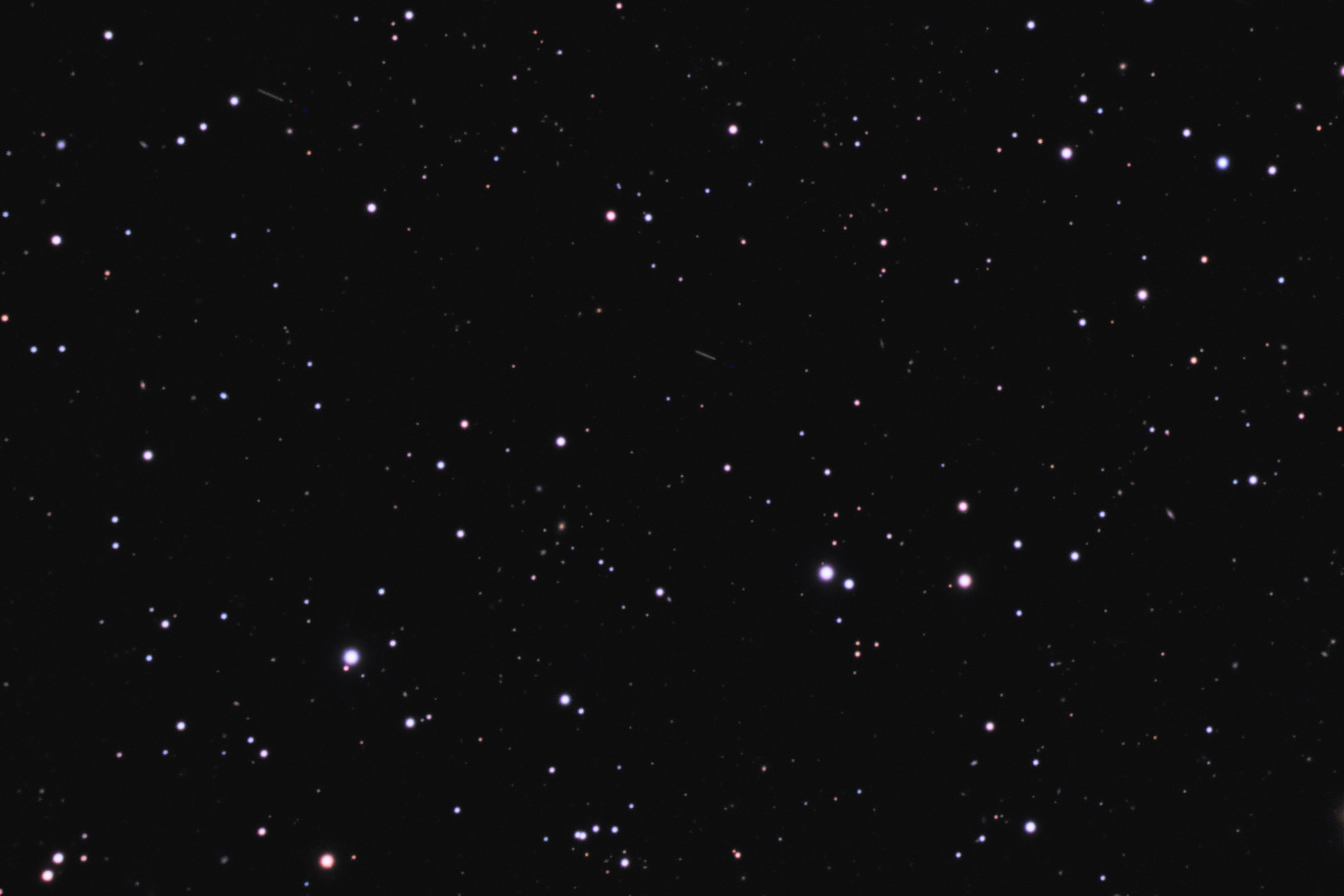 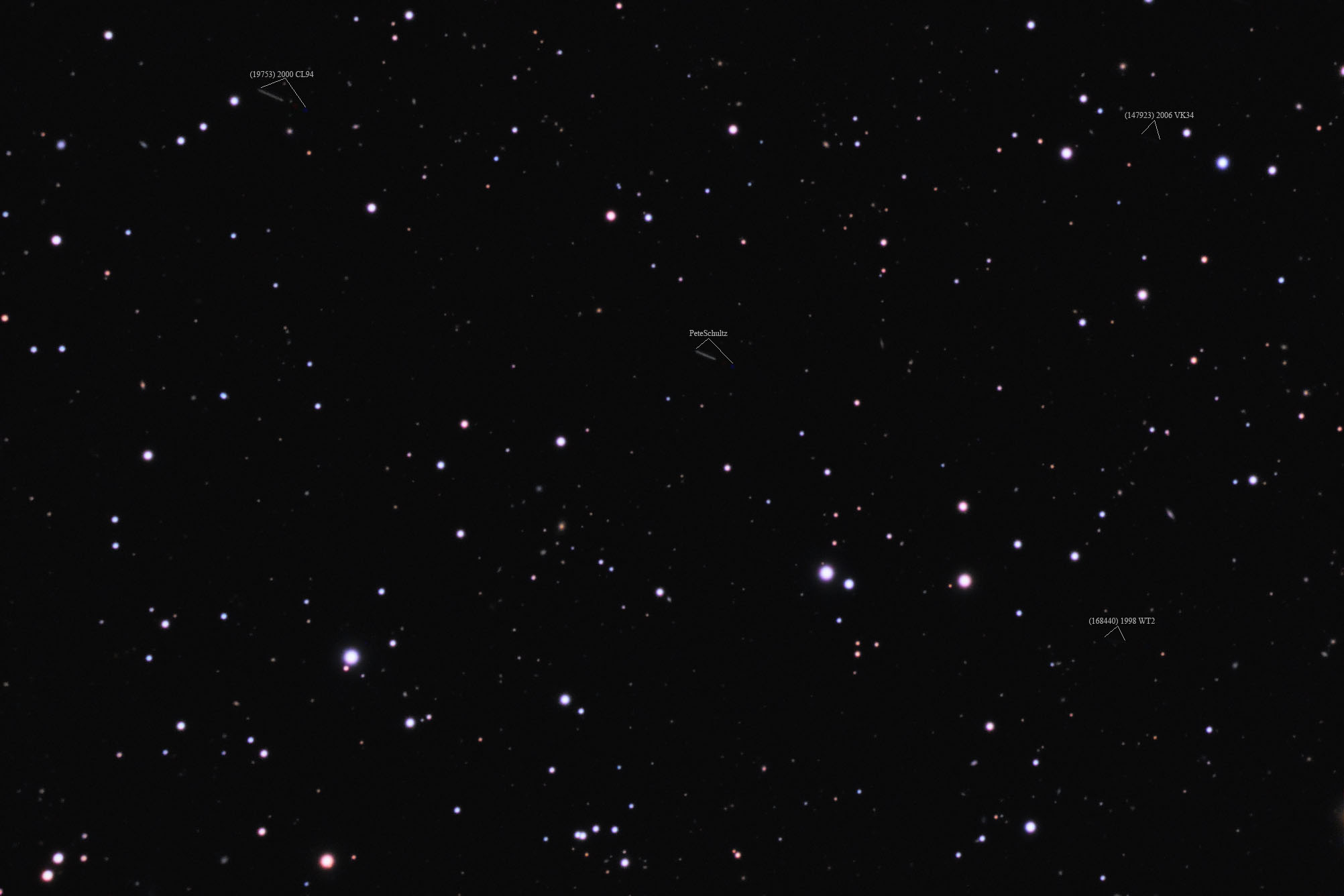 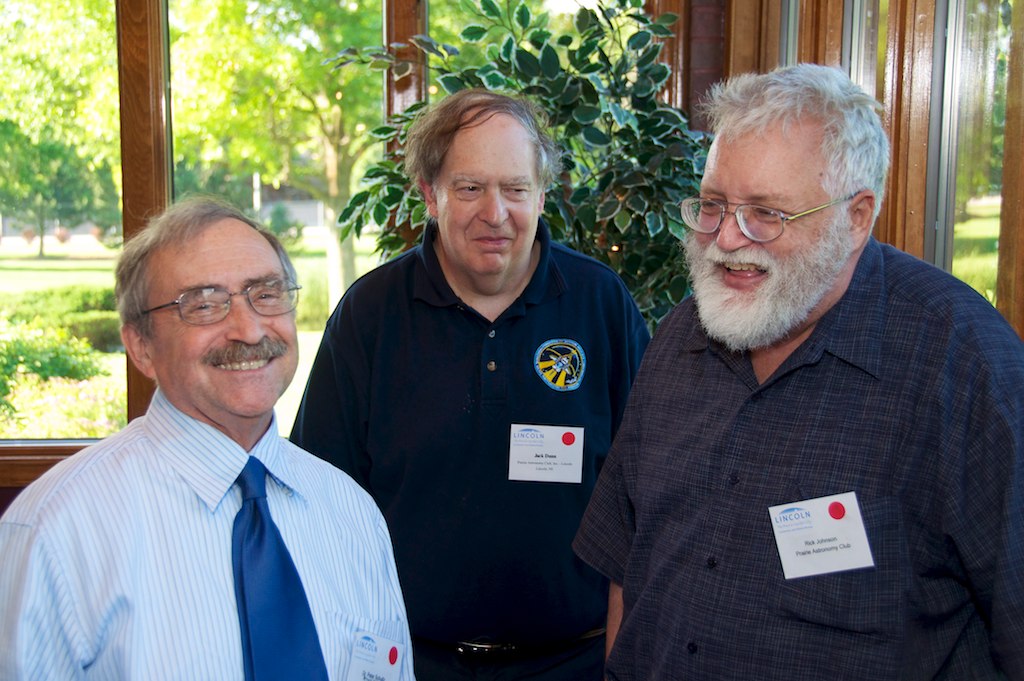