I Zw 148/PGC 58049 is one messed up piece of galaxy parts in Hercules about 375 million light-years distant. It has three listings in NED. The one for I Zw 148 points to the northern blob of the north south piece yet gives its size as 0.4x0.3 minutes which is the size of the entire object. It then says it is an E2 galaxy. If so it is the first very blue elliptical I\'ve ever seen. This is only the start of the confusion in this image. It is a rather small mess being 36,000 light years north to south and 40,000 light-years east to west. I am measuring it as 22\"x20\" in size so slightly different than NED\'s 24\"x18\".

NED lists the left end of the east-west bar as ASK 254551.0 giving a size that matches the entire length and width of the bar. Fortunately, they make no classification attempt. NED then lists the vertical bar as ASK 255273.0 again without classification but with dimensions that match the near vertical bar and coordinates that point to the bigger blob below the one they use for the coordinates of I Zw 148. All three have similar redshifts that are about 0.375 billion light-years but due to rounding one is 0.38 and the other two 0.37. I had hoped for better seeing. As it was getting to where the moon was setting seeing was great but by the time the moon set seeing had deteriorated. There\'s a lot more to this object than I captured. So I have included a 0.19\" per pixel image from Sloan where all the various pieces can be seen. Zwicky considered this a blue post-eruptive galaxy with compact knots. To me it appears to be two colliding galaxies. The east-west bar one and the north-south mess the other. There may be the start of a polar ring about the vertical segment. This is one I wish the HST would visit. So far it isn\'t in the public HST database. I Zw 148 is considered a member of the Abell 2199 galaxy cluster which is centered about NGC 6166 1.5 degrees to the southeast. The cluster has a listed diameter of 3 degrees and a distance of 410 million light-years, virtually the same as many galaxies in this field including I Zw 148.

While this mess is confusing enough for one image there\'s still more confusion. This time about the galaxy to the northeast. NED identifies it as NGC 6138 but does admit the identification is uncertain. SIMBAD and The Sky 6 Pro agree with NED but make no mention about the uncertainty. Yet this is quite likely wrong! The real 6138 is NGC 6363 one hour further east. You can read about this one hour error which was straightened out by Steve Gottlieb. You can read about it at his site http://www.astronomy-mall.com/Adventures.In.Deep.Space/steve.ngc.htm . It really is an Sb spiral that made the 2 micron flat galaxy catalog as 2MFGC 13166. That\'s how it is identified in my image. I measure it at 140,000 light-years in size assuming the 440 million light-year distance.

While NGC 6138 was a bust there are true NGC galaxies in this field. NGC 6145 is the Sb or Sc spiral (depends on the source) below I Zw 148. It is a bit under 90,000 light-years across. It was discovered by John Herschel on May 12, 1828. NGC 6147 is a small Sb or S spiral (yet again sources vary) discovered by George Stoney on May 26, 1849. It is only 44,000 light-years across. NGC 6146 is a large E or E2 elliptical (again sources vary, NED adds that it is a Passive Elliptical Galaxy, that is it has little or no star formation) discovered by William Herschel on March 18, 1787. It isn\'t in either Herschel 400 observing list. It is over 200,000 light-years in size so a whopper of a galaxy. It is also involved in some confusion. Some sources identify it as NGC 6141. The real NGC 6141 is in the southwest corner of my image. It has a bright region surrounded by a faint disk but conditions were so poor the night I took this that I failed to pick up that disk. It was discovered by Guillaume Bigourdan on May 27, 1886. It is classified as S?, S?? or S0 again sources vary. Including what faint part of the disk, I picked up it is 81,000 light-years across. The bright region is only 30,000 light-years in its long dimension. All the NGC galaxies carry a redshift value consistent with that of the Abell 2199 galaxy cluster.

While much of the field is filled with Abell 2199 galaxies it also has the usual assortment of random galaxies and quasars as well as distant galaxy clusters. But no asteroids. 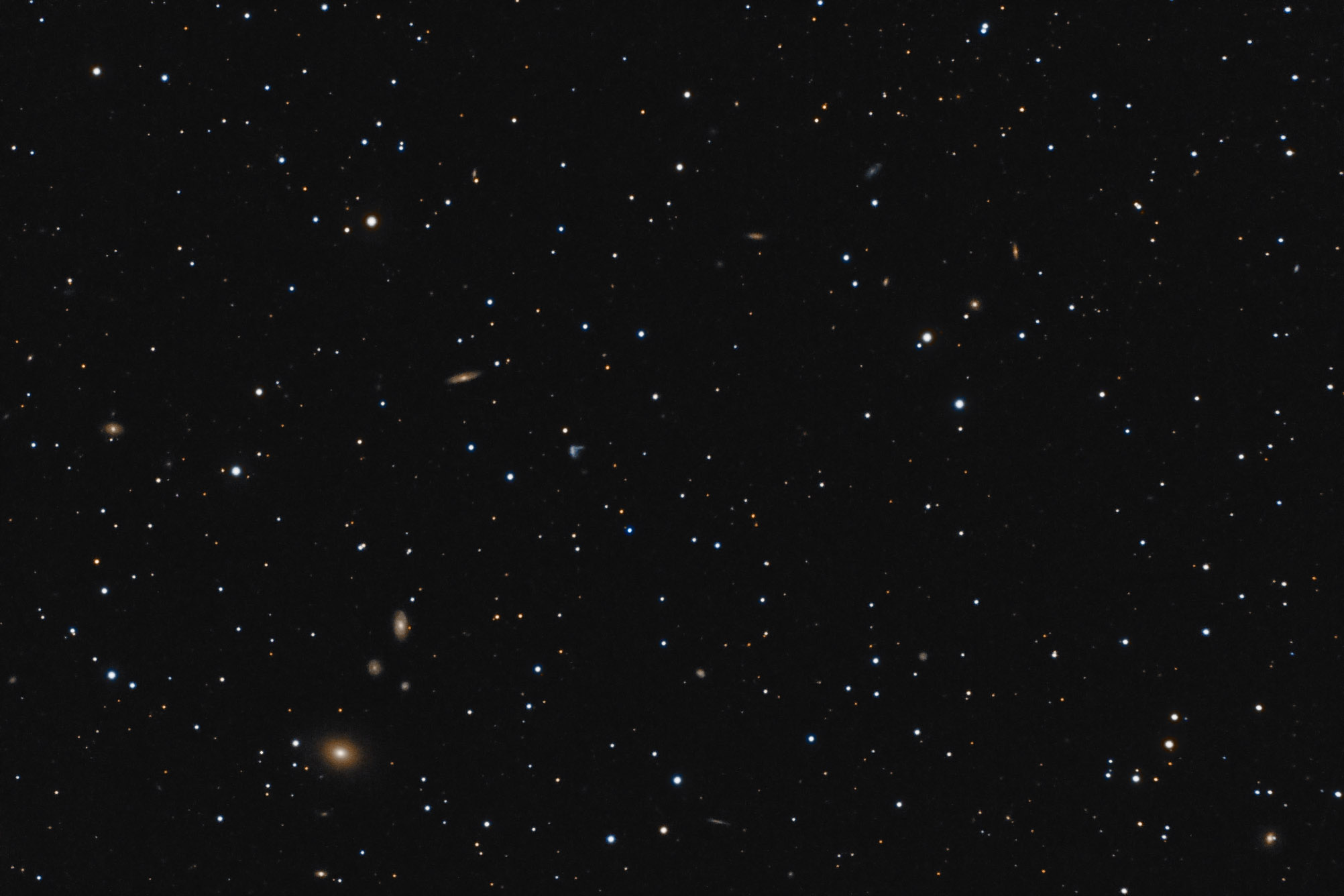 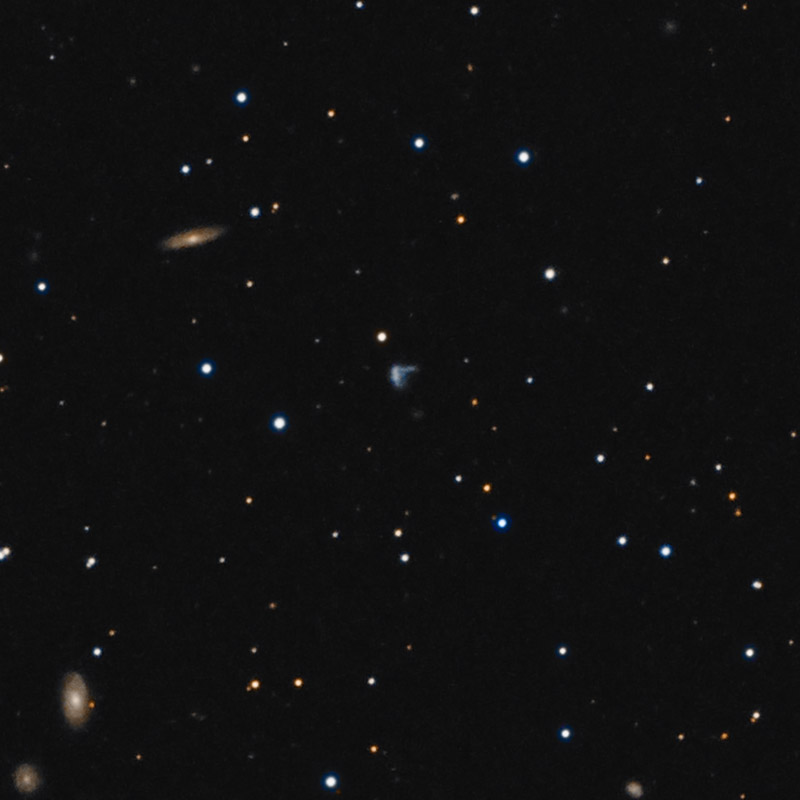 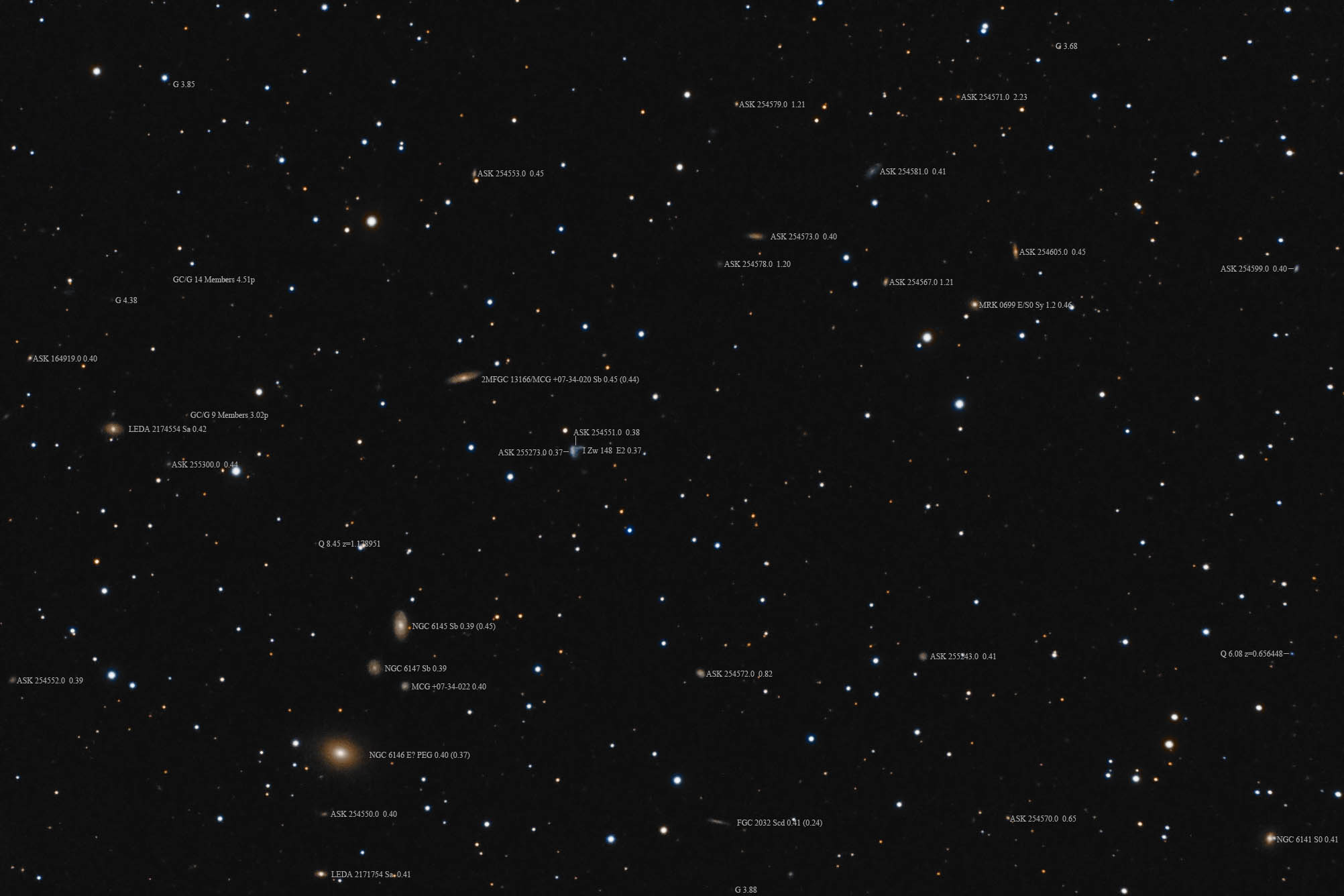 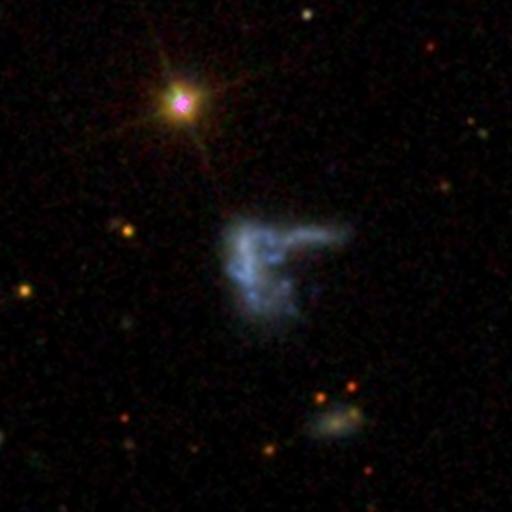