My original target was the pair of galaxies known as NGC 6150. When I checked the field I saw a several other interesting looking galaxies in the field and decided to record the aim point as being PGC 58135 to pick them all up. In the 10 second image I used to check the frame it appeared very strange to me. Turns out I was fooled by a bright star at the north end and a fainter one at the southern end. Unfortunately, these cover some likely interesting detail. While the galaxy looks to have a ring structure I doubt that it is real. It is a barred spiral in which the north arm suddenly bends left. This is hidden by the bright blue star. Then it runs on a tangent to a similar arm coming from the southern end of the bar. This is hidden behind the orange star. The arm then flares outward ending about where I put the label in the annotated image. The southern arm does the same at the northern end of the galaxy, again hidden behind the bright blue star. It then curves on around parallel to the other arm ending just as it reaches the orange star. So it isn\'t all that odd, just that the stars hiding what\'s going on give it that appearance.

Redshift puts it a bit more distant than most of the field, at 460 million light-years though two non-redshift measurements using the fundamental plane method put it at only 360 million light-years. I\'m a bit lost as to why this method was used. I\'d always thought it was designed for elliptical galaxies rather than spiral galaxies. I\'m going with the redshift which makes the galaxy about 110,000 light-years in size. A rather large spiral.

Below NGC 6150 is a truly strange looking galaxy, MRK 881. NED classifies it as an Irregular galaxy with HII emission, likely due to the two obvious blue star clouds on its northwest side. To me, it looks like a disrupted spiral but I can live with the irregular classification. Though I am bothered by its 90,000 light-year size. Irregular galaxies are normally less than half this size. This is in line with a disrupted spiral.

Southwest of PGC 58135 is a very small galaxy that NED labels a Blue Compact Galaxy. It is rather gray in color in my data. The Sloan data which maps blue to near UV shows it very blue. I suspect most of the blue is from UV which is blocked by my filters. I measure it at 13,000 light-years across its longest dimension. NED, however, sees it larger than I do which results in a 20,000 light-year size. Normally NED\'s sizes are smaller than mine rather than larger so the difference is a puzzle. 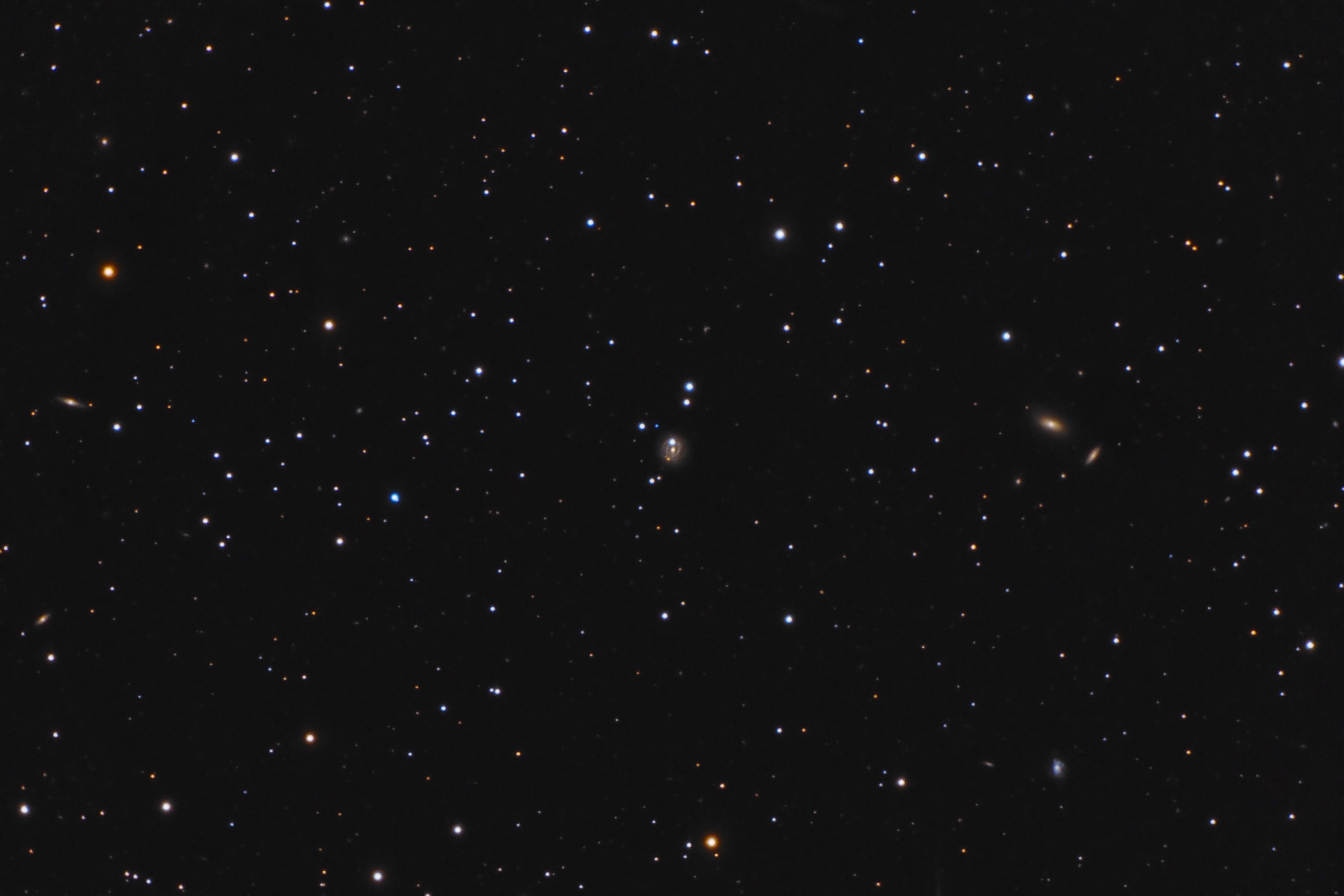 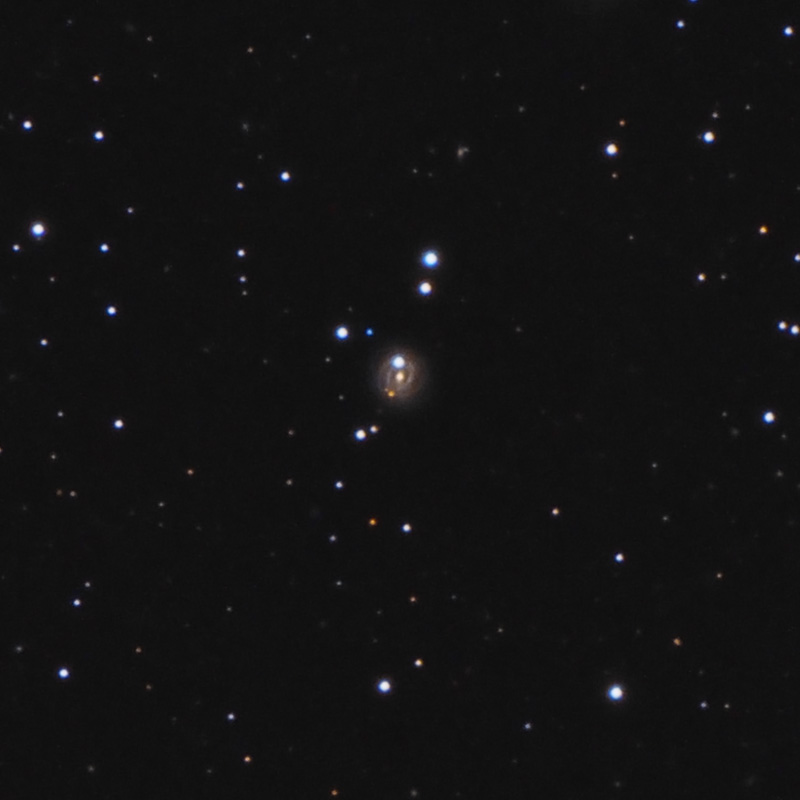 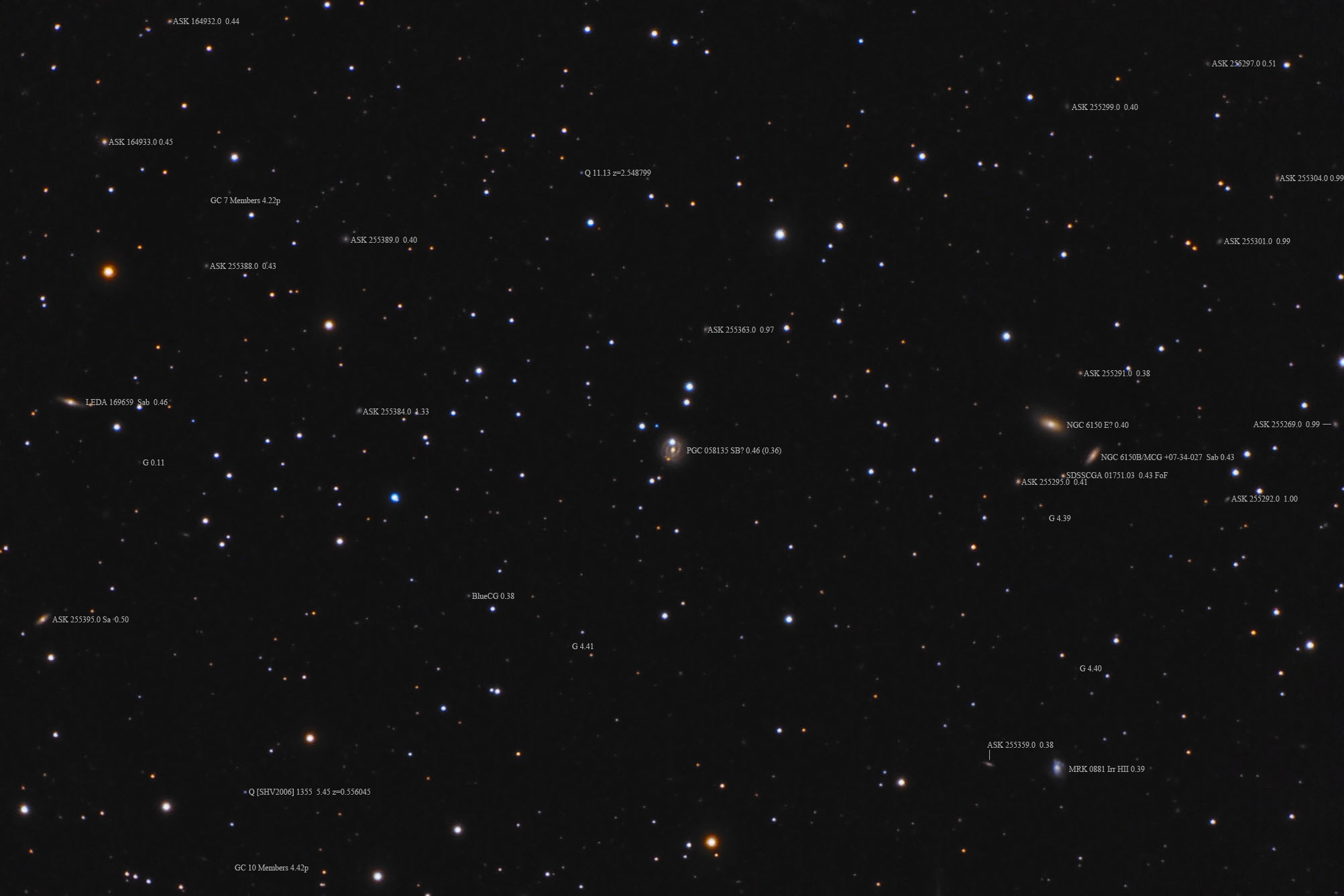