SDSSCGB 00089, also known as PGC 1381733, is a pair of interacting galaxies about 1.15 billion light-years distant in the constellation of Equuleus. Equuleus is the smallest constellation in the northern hemisphere. Only Crux in the southern hemisphere is smaller. While SDSSCGB 00089 consists of two galaxies it has 4 subentries for this object. Two knots in the southern ring galaxy have their own designations even though they aren\'t really separate galaxies. I\'ve noted all 4 on the annotated image.

The northern member has a strong core with a plume to the northeast. High resolution SDSS images of it show the plume has a hole in it so it shows elements of being a ring galaxy, just not as obvious as it is for the southern member. Only this northern member has a redshift listed at NED. I assume the southern ring is at virtually the same distance. NED makes no attempt to classify either of these apparent ring galaxies. In case you were wondering SDSSCG stands for Sloan Digital Sky Survey Compact Galaxy (groups). The B means it is from the B catalog of the 6th data release (DR6).

Rings similar to that seen in the southern member are often modeled by direct impacts by a small, very dense, galaxy that acts something like a bullet blowing the target galaxy into a ring. often the core is driven to the ring. Finding nothing on this pair I don\'t have any idea if this is a likely reason for the way this pair appears.

I can find no notes of how I learned of this pair. It was saved under the designation for the galaxy to the southeast at 920 million light-years rather than its own designation (PGC 1381773). This might be because the other galaxy is in The Sky but this one isn\'t, allowing me to aim by object rather than coordinates. I have a tendency to mistype coordinates. You don\'t want to know how many wrong fields I\'ve managed to take due to such typos. So I use a nearby object when the object of interest isn\'t in the database.

I\'ve prepared an annotated image for this rather barren field. Nothing much of interest is to be found in it, however.

The image was made over two nights. Neither very good. The color data from the first night was totally unusable. The data from the second night barely so. Neither night\'s luminance data was very good. Seeing was worse the first night but transparency better. While including it hurt resolution somewhat it was necessary to get enough signal to reduce the noise to acceptable levels. This is another that could benefit from a reshoot but considering how poor the field is I doubt it will happen. 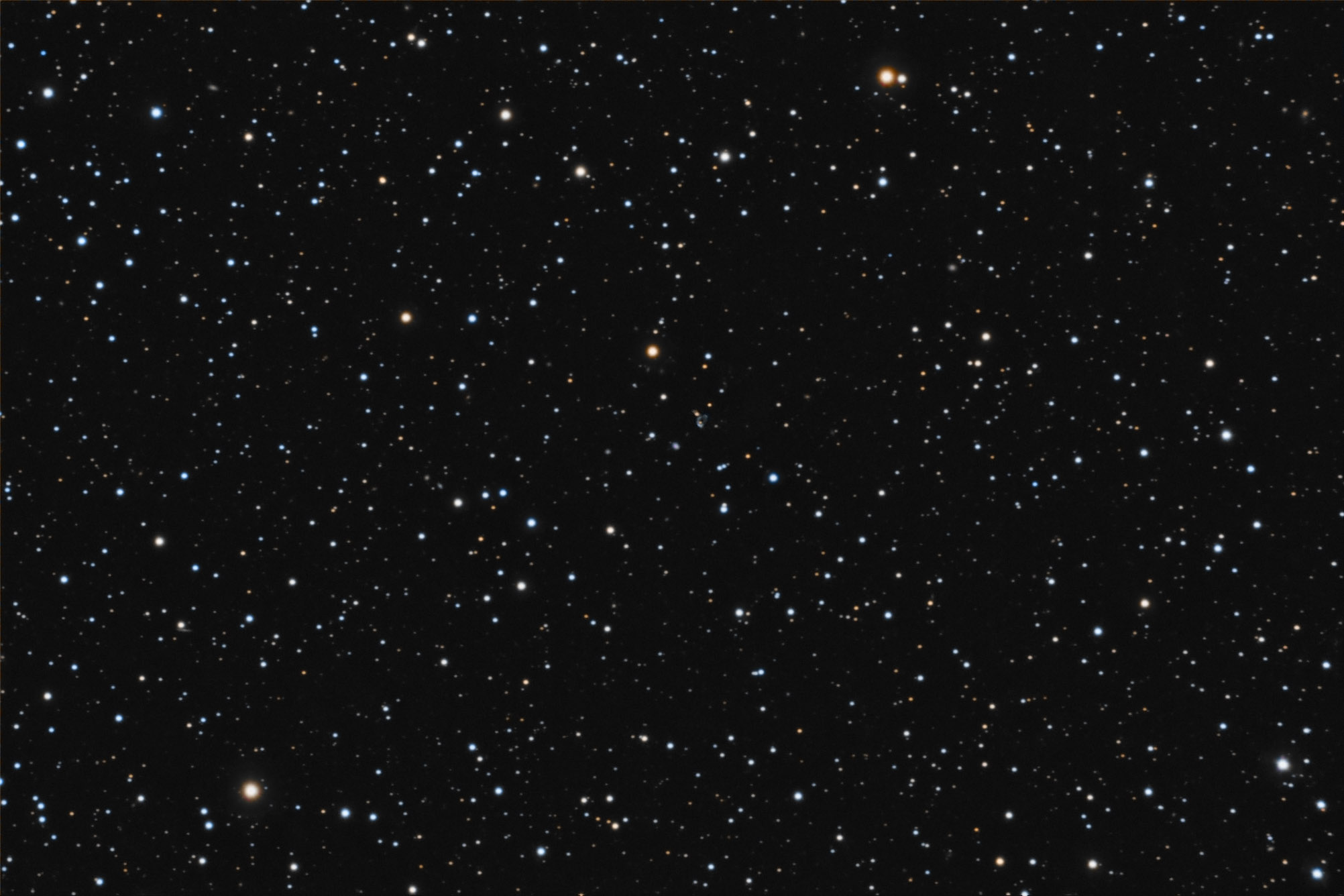 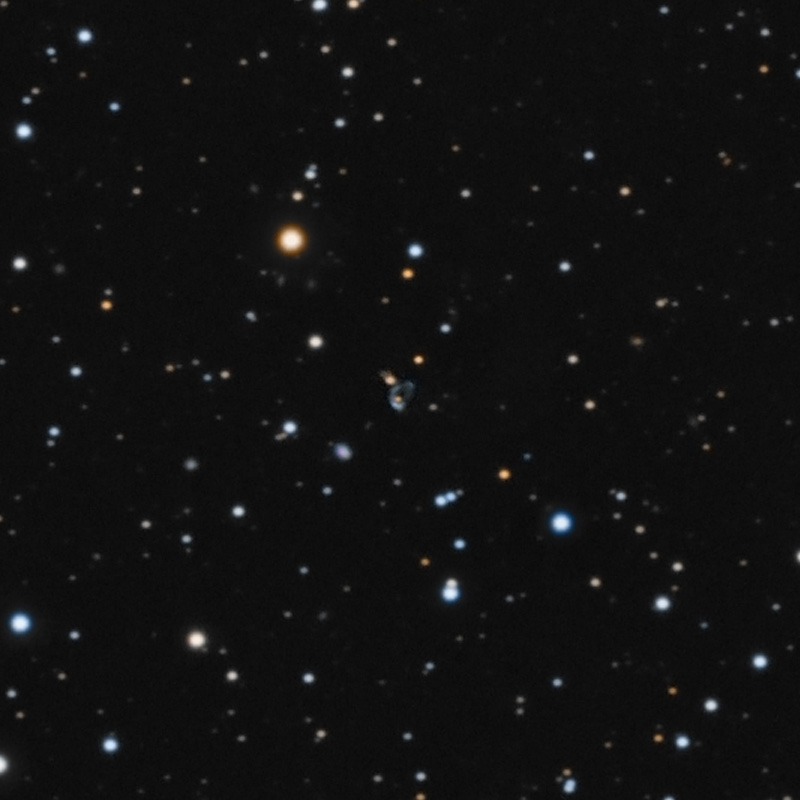 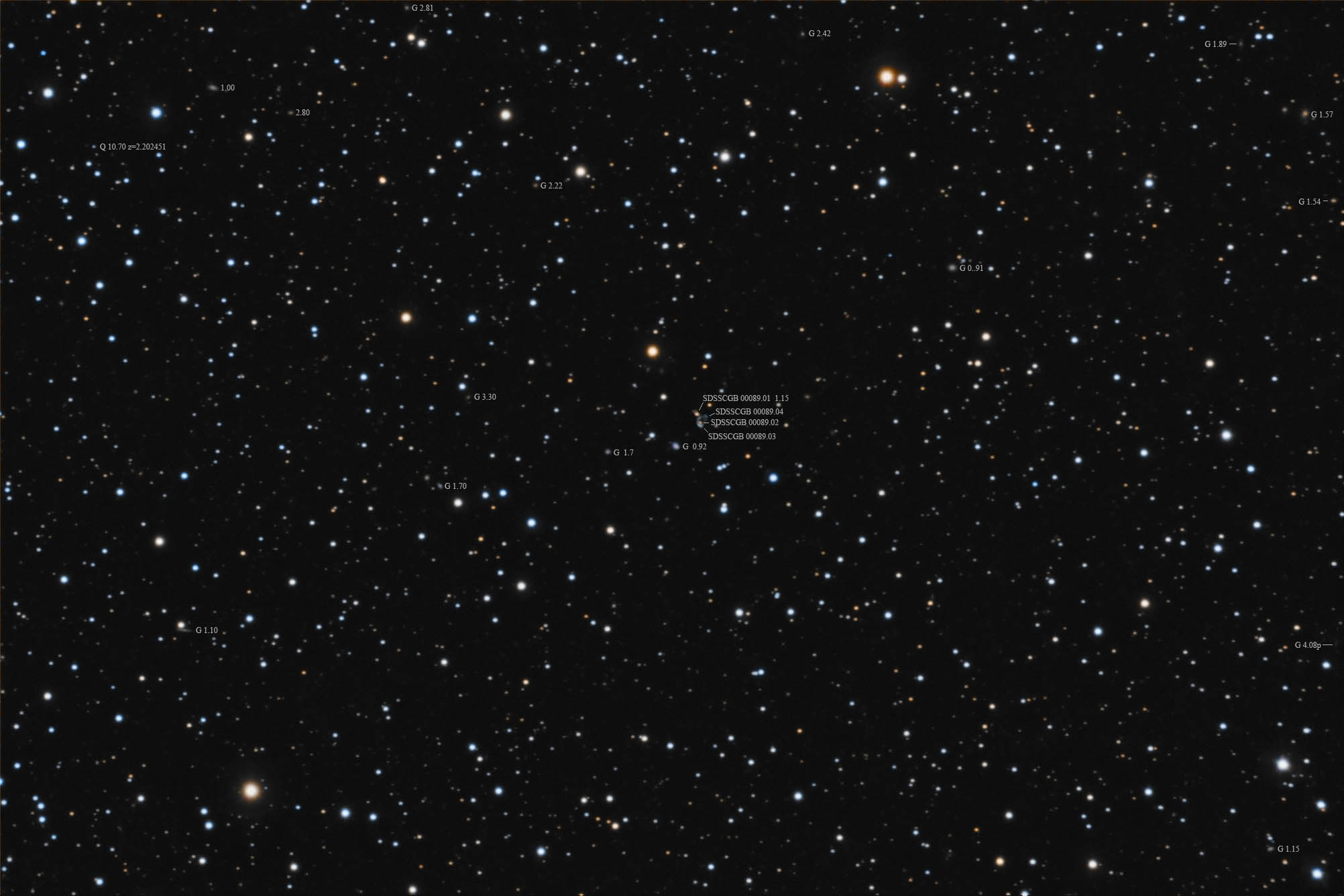