I\'ve had PGC 72910 on my Arp-like to-do list for some time. I finally imaged it in November 2010. Sakib Rasool sent me his list which included VV 697. I imaged that one in October 2010 and posted it 11-25-2011. Processing PGC 72910 seemed familiar to me. Yep, turns out the Tower of babble nailed me again. I had it under different names under both lists. I wasn\'t going to run this but conditions were better so it shows a bit more detail and better color so I\'ll bore you with a redo. Besides dummy spent an afternoon on this and hates to waste it. Yes, I\'ve been processing so fast of late my brain is numb.

VV 697 is a triple galaxy system (quad?) in the northeast corner of the Great Square of Pegasus. It lies about 750 million light-years beyond the Great Square to be more accurate. The three galaxies, left to right (east to west) are PGC 72909, PGC 72910 and PGC 72911. Yes, this is backward from the normal west to east numbering system for the PGC catalog. A fourth anonymous galaxy is hiding partly behind the middle galaxy PGC 72910. There\'s little on this field in NED. The area is included in Data Release 8 of the Sloan Digital Sky Survey but the data hasn\'t as yet been included in NED\'s database. I imagine the 4th galaxy will be in that data. I hope with redshift data to see if it is related to the other three.

PGC 72911 is the only one that appears to be significantly distorted by interaction with the others. It is classed by NED simply as peculiar and is noted to be a Seyfert 1 galaxy. While interaction isn\'t needed to create a Seyfert 1 AGN (Active Galaxy Nucleus) it may be the cause in this case. The center galaxy, PGC 72910 is classed simply as a spiral with a note that it is a starburst galaxy with HII emission. So while it looks rather sedate something (interaction possibly) has triggered massive star formation hidden behind dust in its core. NGC 72909 is also classed simply as a spiral with HII emission but no starburst activity nor AGN.

Except for these three galaxies, NED has no redshift data on any other galaxy in the field. All the others it does list are from the 2MASS IR survey. One, 2MFGC 17969, is also in the 2MASS Flat Galaxy Catalog. It is the obvious edge on flat galaxy northeast (upper left) of the VV 697 group. While it doesn\'t appear very bright in my visible light image it is listed as magnitude 12.2 in the IR K band. Sounds like it is a very dusty galaxy. 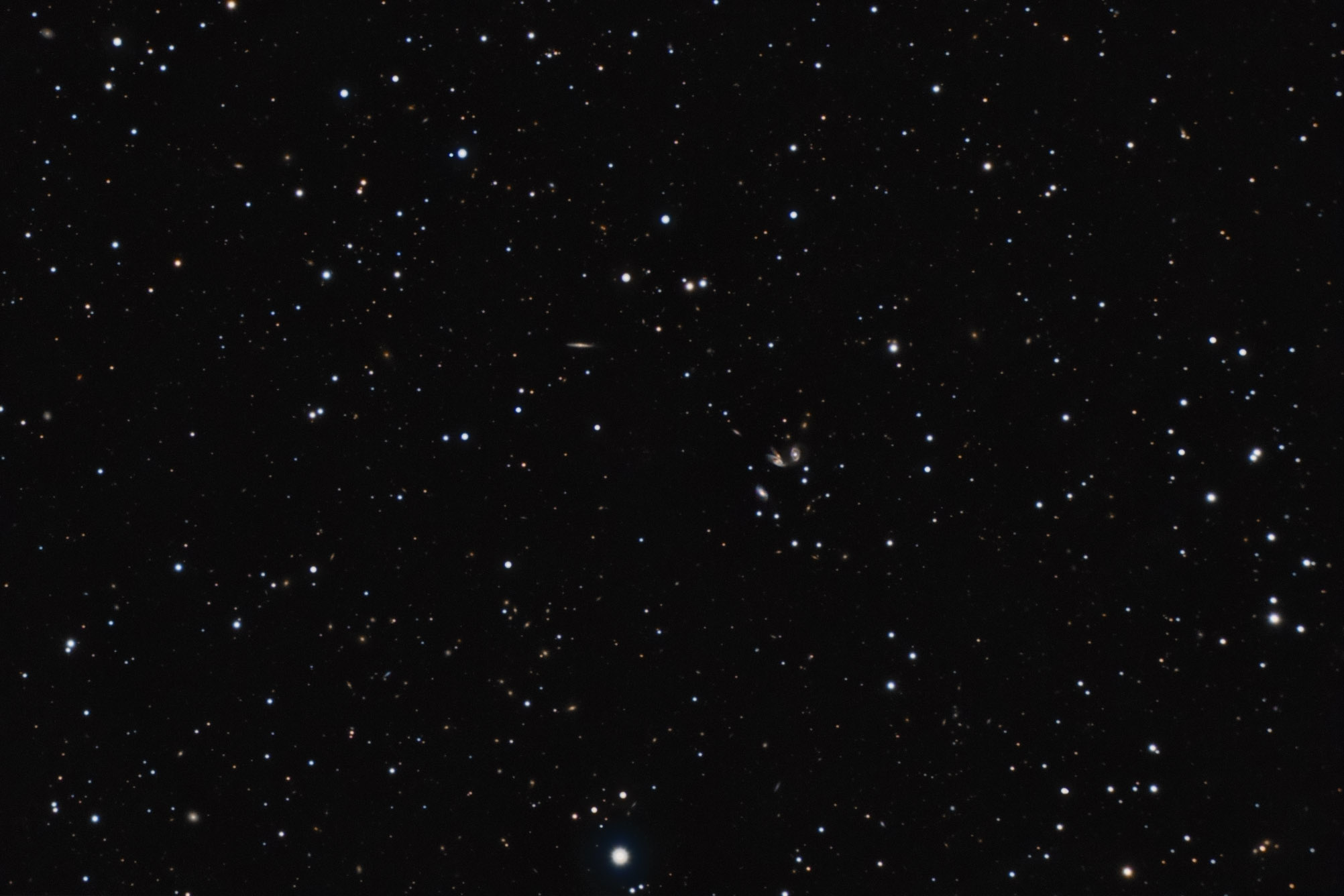 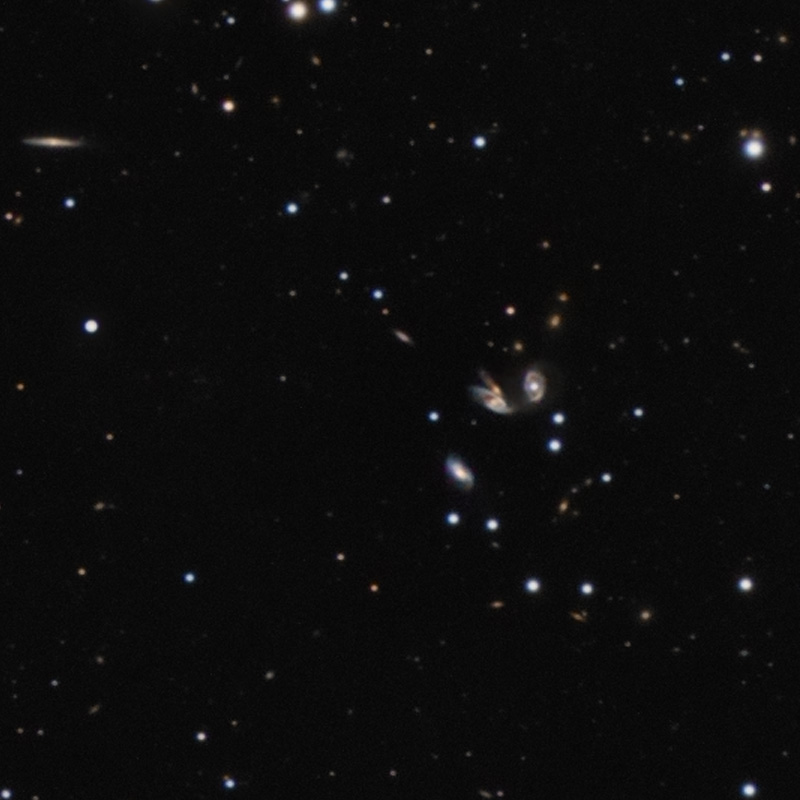 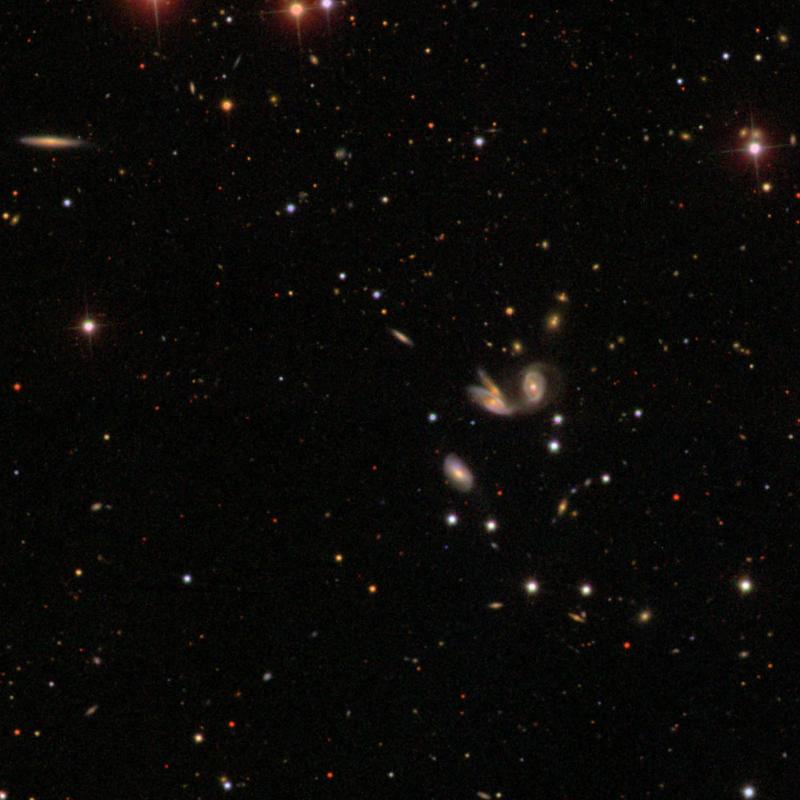