LEDA 087293 (also known as PGC 087293) is a strange ring galaxy in the southwest corner of Bootes. NED classifies it as, well, nothing, which I found surprising. Another catalog, the Low Surface Brightness Catalog lists it as a Ring galaxy but then things get confusing. Their position has an error bar radius of 37.5\" but the position is about 45\" from the galaxy\'s core. With nothing else looking like a ring it appears they are talking about the ring I imaged. Both LEDA and the LSBC have redshifts for it but again they can\'t agree. LEDA says 1.72 billion light-years while LSBC says only 520 million light-years, less than one third the distance. But then there seems to be a second galaxy within the ring. A fainter one is seen to the left of the central one. LEDA\'s position matches the brighter central one. Could it be that they really meant the fainter and possibly more distant one? The GALEX satellite records a UV source halfway between and slightly below the two \"cores\" but its error bar radius is 3\" and thus can include both objects! It is closer to the faint galaxy. So which it means can\'t be determined. If the LEDA distance is used the ring is 250,000 light-years across. If the LSBC distance is used then it is only 75,000 light-years across. Neither NED nor SIMBAD shows an object at the position of the second core unless it is the GALEX object. Here I thought I was imaging a neat galaxy. I didn\'t realize I was actually imaging a can of worms.

The LEDA distance of 1.72 billion light-years is echoed by many other galaxies in the field as shown by the annotated image. NED shows several small galaxy groups with this distance and one large galaxy cluster GMBCG J208.39970+09.70305 centered to the easy at 1.69 billion light-years and having 23 members. With no size given, I can\'t tell if it encompasses all galaxies at about the 1.7 billion light-year distance but I assume it likely does.

The field contains two possible quasars besides some identified ones. One is lists as a candidate quasar by NED so is labeled CQ while the other is listed as an Ultraviolet Excess Source so is listed as UvES in the annotated image.

Transparency was poor for this image. I tried over several nights but much of the data was unusable. One luminance frame was taken a night when an asteroid, (460453) 2014 SV218 was in the frame. It was listed as 19.4 magnitude but appears a magnitude fainter showing how poor the night was. With only a single 10 minute trail, some of which was lost to clouds it hardly looks like an asteroid in the image. Look west of LEDA 087293 to find it in the annotated image. I used the three best color frames for color data due to very low transparency. Turned out one RED one hurt more than it helped so only 2 red ones were used though one happened to be when skies were rather good so that alone likely would have been sufficient though I used two. 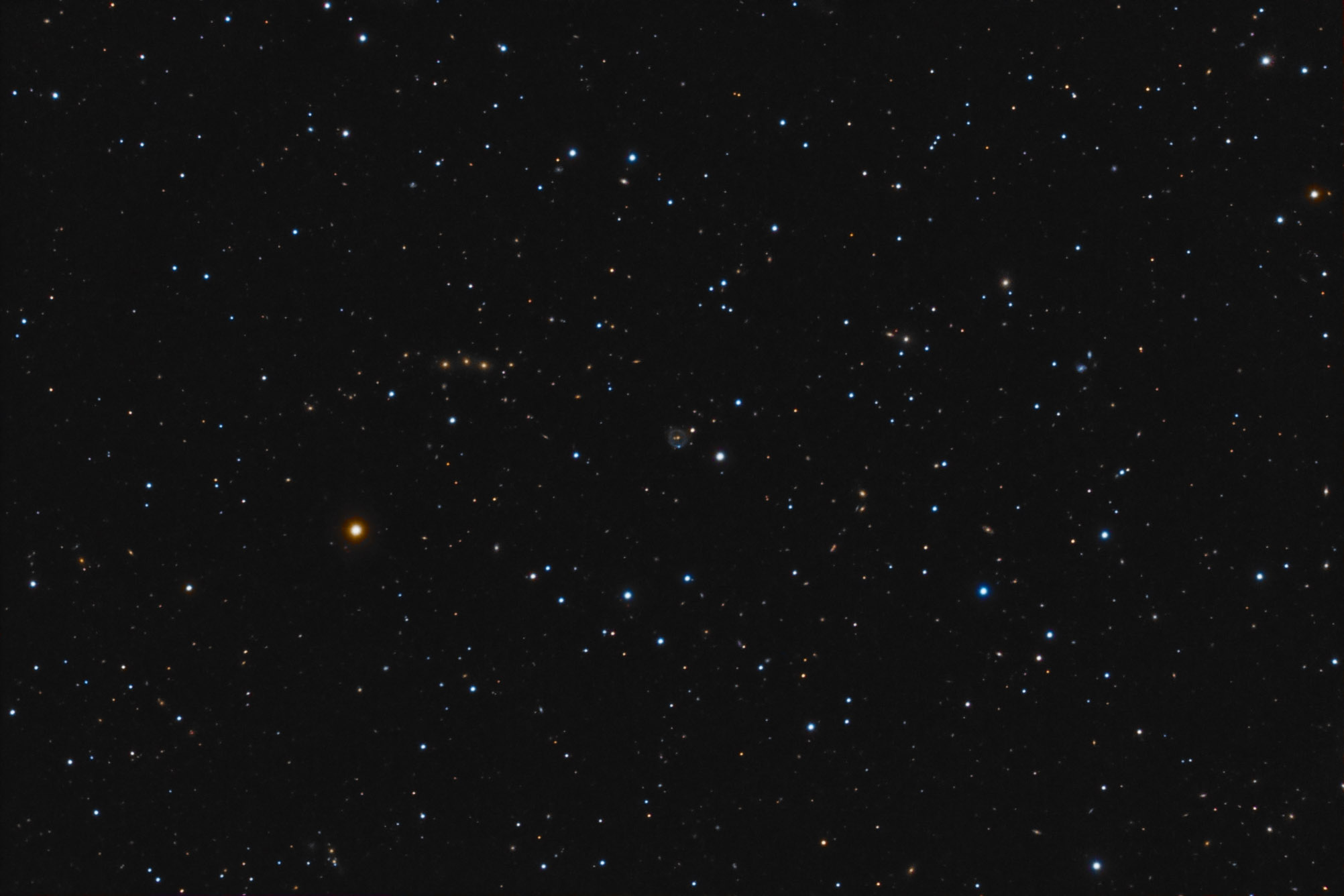 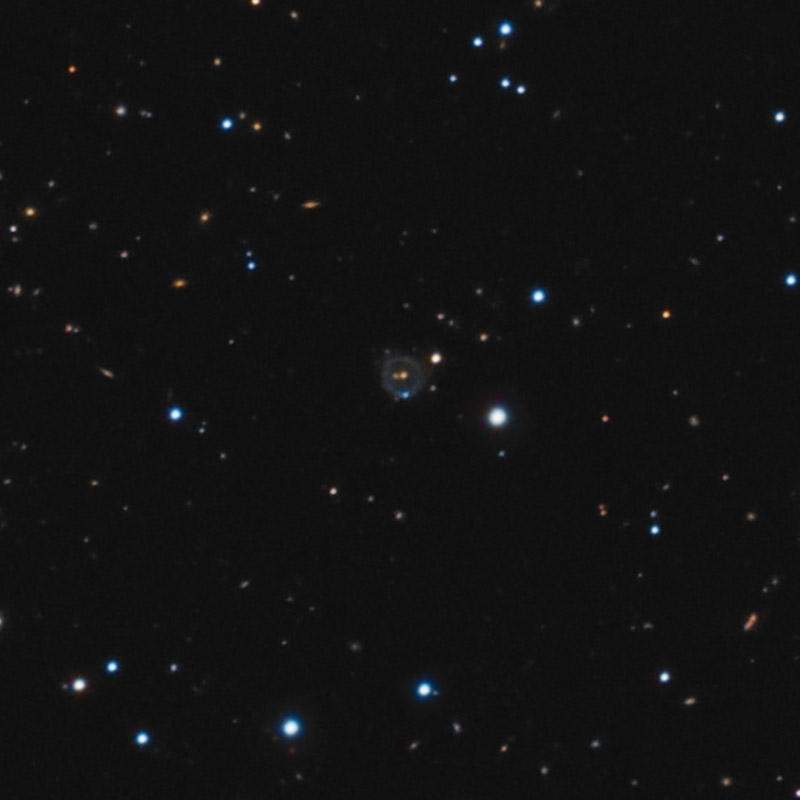 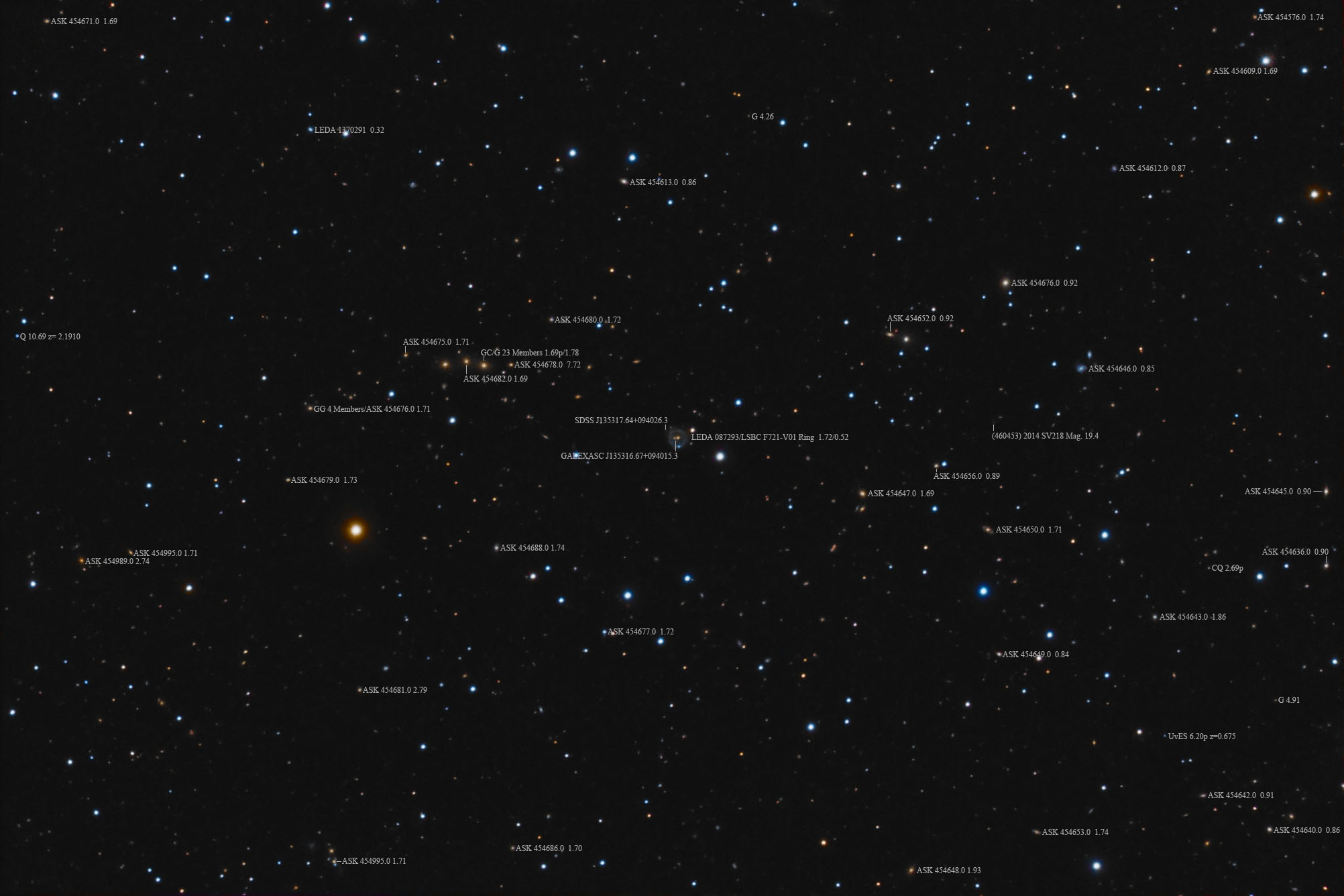