Gyulbudaghian\'s Nebula is a reflection nebula around PV Cephi which is in quite a large dust cloud. Like other such nebulae in the dust around newly forming stars, it is a variable nebula. Hubble\'s Variable nebula is the most famous but there are others such as NGC 1555, aka Hind\'s Variable Nebula, lit by T Tauri. Gyulbudaghian\'s Nebula is yet another example. Checking the POSS 2 plates there is a huge change between the time the red and blue images were taken.

I first imaged this one on September 24, 2011 under very good conditions. After seeing some low-resolution images taken in the fall of 2013 that appeared to show a change I put it on the list. Seeing and transparency never cooperated. About the time it was getting too far west I had a go at it anyway on December 24, 2013. Due to poorer seeing and transparency conditions make a comparison impossible other than to say it has obviously changed greatly over the 27 months. I\'ve included a crop of both images at 0.8\" per pixel. If you look closely you\'ll notice the 2013 image is slightly larger scale as the 2011 image is closer to 0.81\" per pixel while this year\'s image is about 0.79 per pixel. This is due to how my image scale changes with temperature. I didn\'t compensate for the 20C temperature difference between those two nights. This December was very cold compared to September 2011 and it results in a slightly larger image scale. Rather than get all precise I just call it 0.8\" or 1\" or 0.67\" which is the average but actually could be very slightly greater or lesser depending on the night\'s temperature.

If you follow the long left arm in the 2013 image you come to an elongated object, or maybe it is two objects, the longer above the shorter. The shorter is the Herbig Haro object HH 415. I don\'t know if the upper section is related or not. I found no separate designation for it. It looks as if it may be an unrelated blue galaxy. Fainter HH 315 lies to the northwest. SIMBAD lists a few other HH regions but none made it through my poor transparency. The dark nebula in the lower right is LDN 1155C, part of the larger LDN 1155 outside of my image. What few galaxies NED listed in the field have been identified even though they are identified only by their J2000 coordinates in the 2MASS survey.

The blue arc at the very bottom left of center is due to a star just barely off the chip, SAO 19041 at magnitude 9.7. It must have hit something to reflect so strongly into the frame. 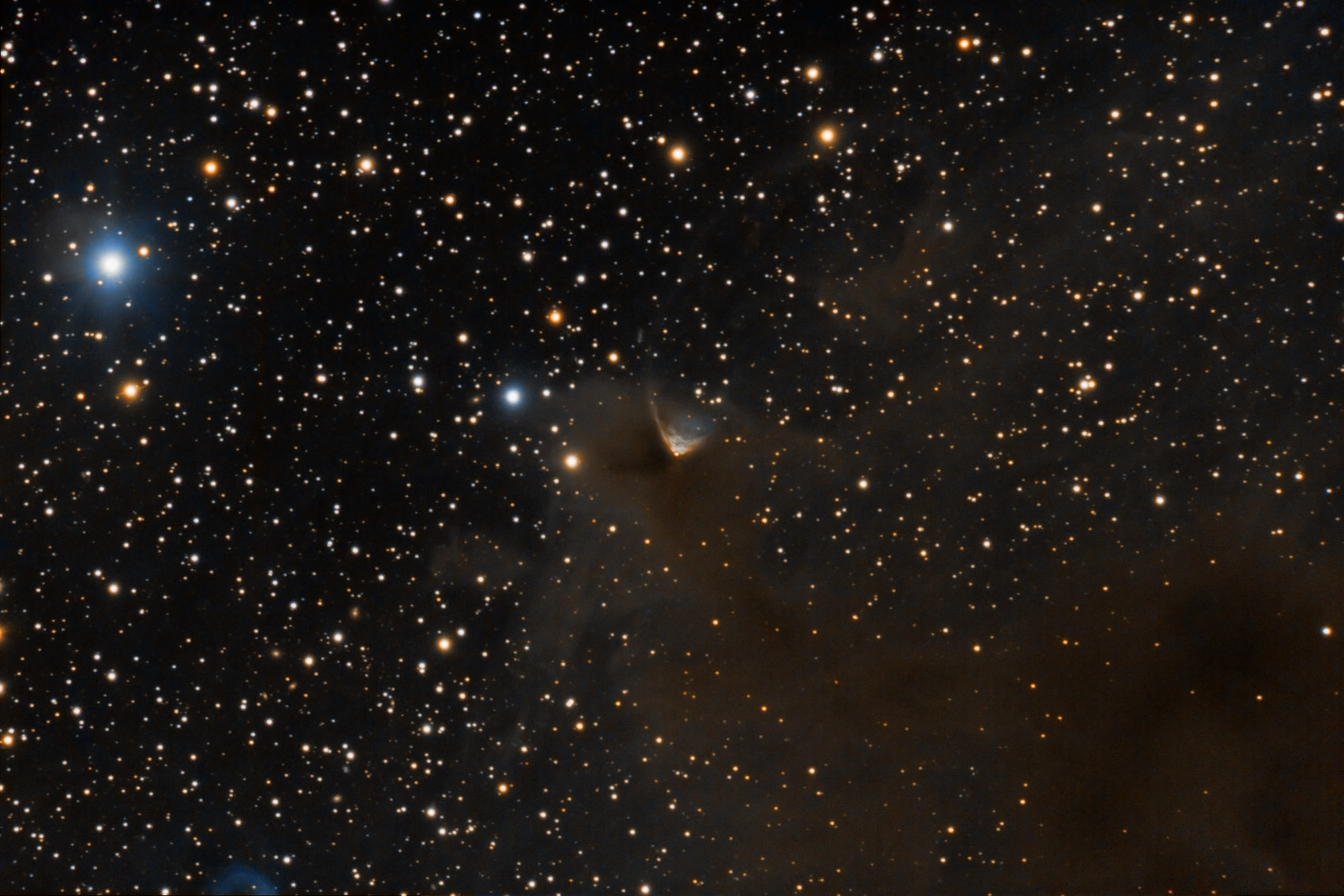 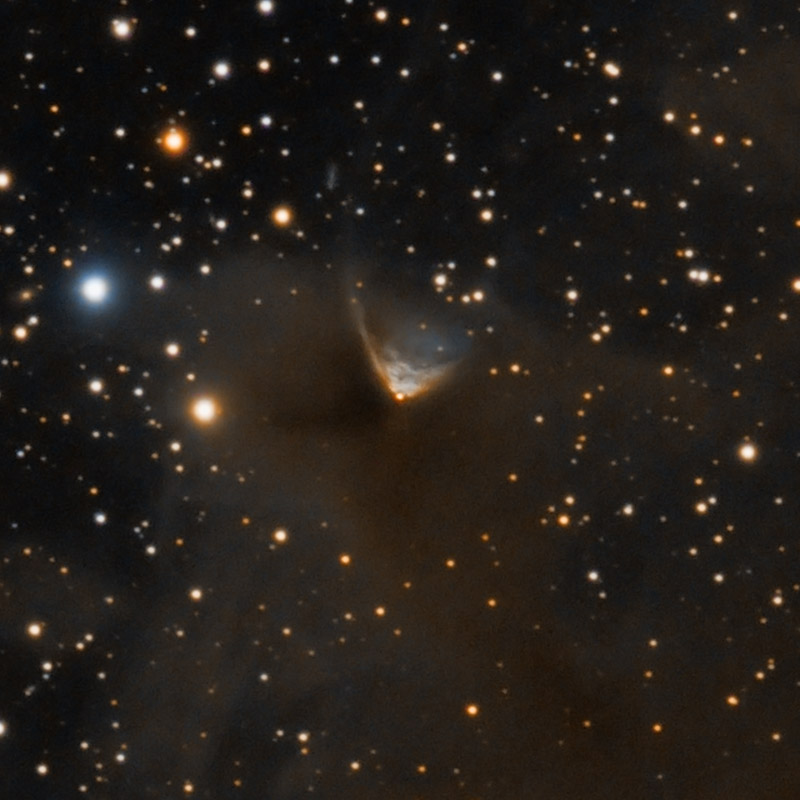 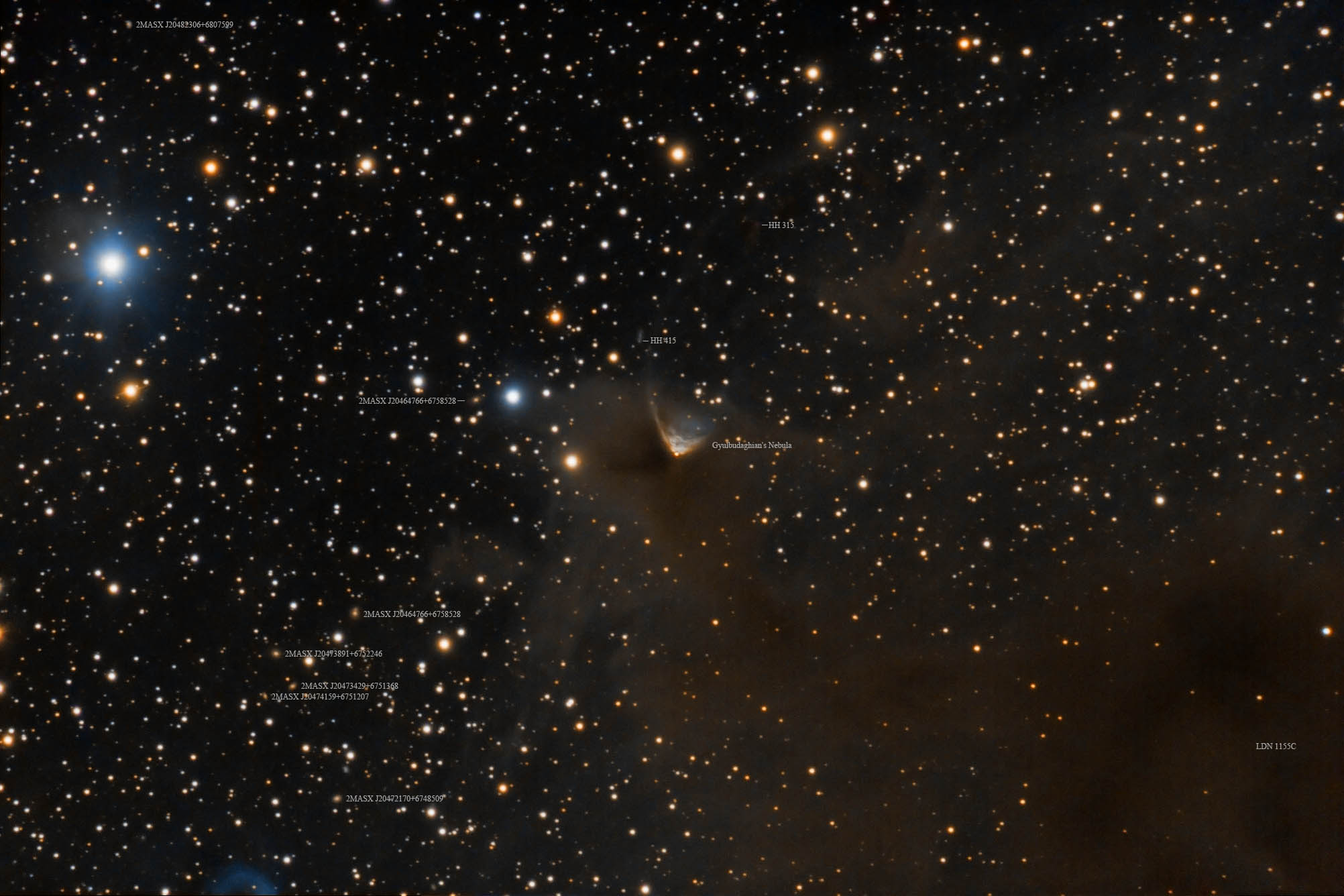 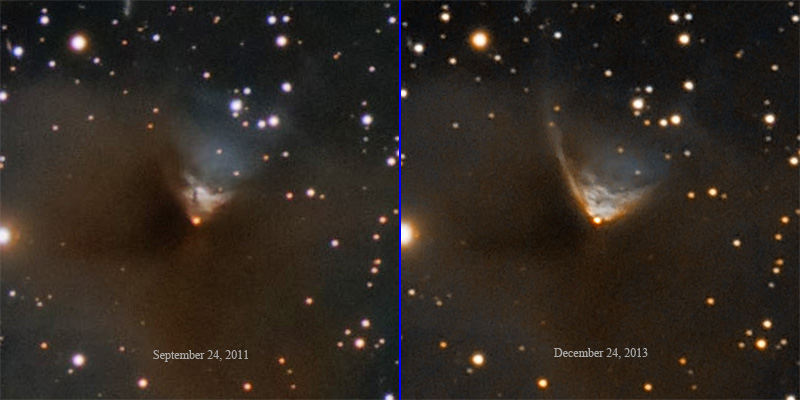