In my entry of NGC 3079, I mentioned a nearby twin quasar just out of the field. Einstein\'s concept of gravity is a warping of space-time by an object with mass says that if you have a great enough mass it can deflect light much like a lens can bend light. This is called a \"gravitational lens\". Astronomers searched for decades but didn\'t turn up much. As scopes could go farther and farther into space a few candidates turned up. Some were seen and not recognized. This is an image of one of these unrecognized gravitational lenses. The first picture shows NGC 3079 at the very bottom with a \"double star\" circled. This is no star, however.

The close up below shows the \"stars\" to be blue in color. Eventually, some astronomer noticed that these were variable stars. Their light output varied slightly. So slightly it was best seen in a spectroscope as a change in the spectral lines along with a slight brightness variation. The odd thing was the spectra of these two objects was almost but not exactly the same. This was a bit of a puzzle as the spectra were very different from that of a star. In fact, it didn\'t match any known star type. To have two so close together made no sense. Nor could any lines be identified to help give a distance in case this was a galaxy rather than a star. Eventually, it was realized these were quasars. Star like objects so redshifted their spectra made no sense to astronomers used to \"normal\" redshifts. After more study, they realized this was not two objects but was one. This is the first gravitational lens to be recognized. The spectra were virtually identical if you took time into account. One spectrum lagged about 430 days behind the other! This meant the light traveled 430 light days further to reach us than the light making up the \"other\" quasar. The announcement was first made in 1979, Hubble answered another puzzle. The spectra of the lower object also had lines in it that were to be expected of a much nearer galaxy. It turns out this galaxy is the lens and at my resolution of about 2.5\" of arc due to my local seeing it can\'t be seen. You need sub arc second resolution to separate the two. Something possible in space but not normally on earth at blue wavelengths. I see it only as the lower one being brighter as it is the light of both the lensed QSO and the galaxy. Hubble\'s image and a bit more on this guy can be seen at: http://www.astr.ua.edu/keel/agn/q0957.html
My exposure is very short due to clouds cutting me off and doesn\'t go very deep compared to most of my images. A nearby moon didn\'t help! Also, it is taken at 0.5\" per pixel compared to my more normal 1\" per pixel. The quasar images are 6\" of arc apart (a quarter seen nearly one kilometer away). The quasar QSO 0957+561 is about 8.85 billion light-years away light travel time. The path followed by the upper image is 430 days shorter than the lower image. 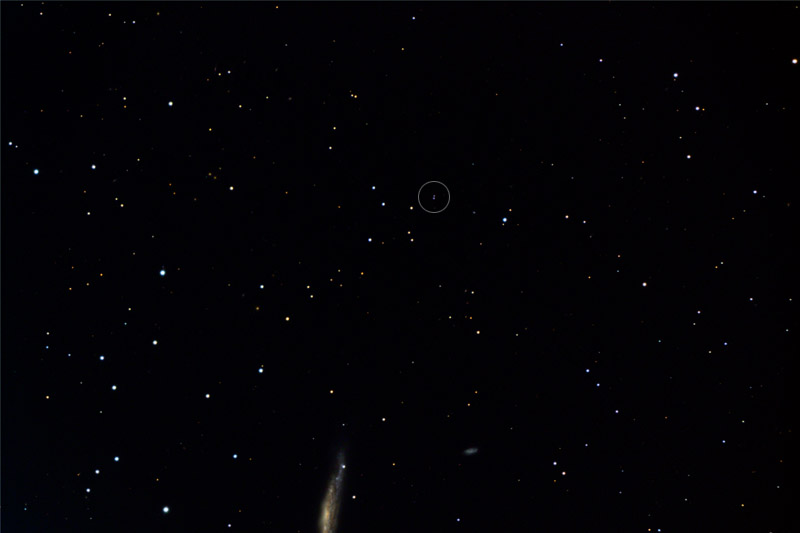 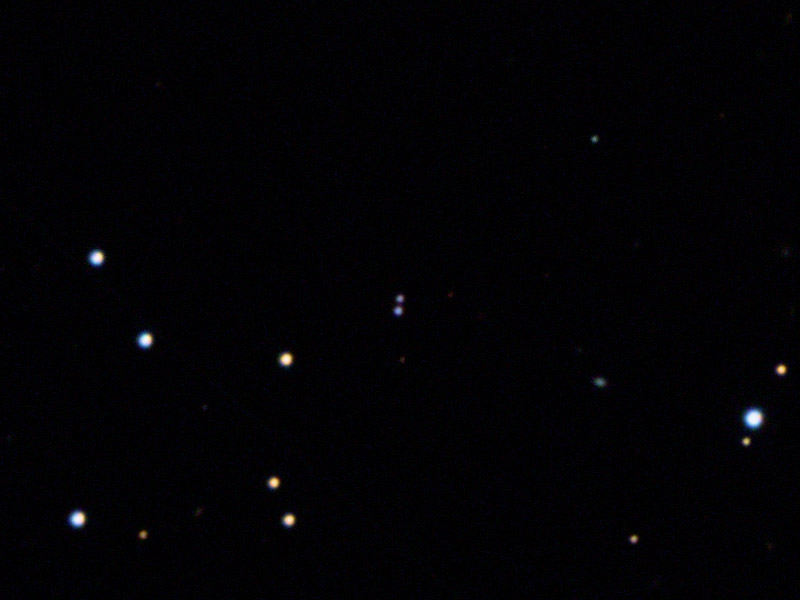