Sharpless 239 is a mostly reflection/dark nebula with several Herbig-Haro objects embedded in it -- the pink spots. It also contains a mystery I\'ve not been able to solve. Notice the three near star-like points in a triangle in its center. The POSS 1 and 2 plates show only two. The one at the lower left is missing! I\'ve tried to find out about it but so far with no luck. My first thought was a variable star though I couldn\'t find any listed for its position. Checking what few images of this object exist on the net I find all modern ones show the star-like object but those dating to the time of the POSS plates don\'t. I contacted an astronomer in Hawaii that was supposed to be an expert and was told it was on his narrow band image (great shot with a 2.5 meter scope) but he provided no date. Since it wasn\'t a \"new\" object he wasn\'t interested and told me that it was worthless to compare narrow-band images to the POSS plates, totally ignoring the fact my shot wasn\'t narrow-band! I wrote him back asking why it wasn\'t allowed to compare wide-band red images to red POSS plates and got no reply. Maybe my email didn\'t get through his filters. My original email was relayed by another astronomer who I didn\'t bother to relay my reply. Thus he will remain nameless here. It appears that sometime between the POSS plates and today this object has come out of the murky depths of the nebula for us to see. Though in doing so it didn\'t change the nebula much that I can see. I do see a slight brightening in this area on the POSS 2 plates so it may have just started to appear about that time. Or maybe it is a variable star everyone since has caught at near maximum. I just don\'t know.

Rather than type away as to what an HH (Herbig-Haro) object is I\'ll just refer to this link.
http://en.wikipedia.org/wiki/Herbig-Haro_object

They aren\'t necessarily pink (pink is due to ionized hydrogen gas) and in fact, the other two star-like objects carry HH designations and the \"new\" one may be another that is now showing as blocking dust moved out of our line of sight. I wanted to see it in IR light but couldn\'t find any images. I\'d hoped to find some by Spitzer. If anyone knows of any let me know.

I found no solid distance estimate for this object but if it is associated with the same dust cloud as T Tauri - which appears quite possible then it is a bit under 600 light years from us.

After I posted this image Adriano, an imager I\'ve exchanged posts with, made a movie using the POSS I and II images (both blue and red combined) and my image (color). It shows the star-like object coming out of the merk but to our surprise, it shows something else. The HH objects (not the star-like object) are moving! The movie covers from the mid 50\'s to about 2008 when my image was taken so covers about 50 years.

One explanation as to why they move is this is a light echo. Off-screen, to the northeast, a supernova apparently blue some time in the past. Its UV light is hitting the H2 in the HH objects. I\'m mostly seeing the H alpha as does the red POSS plates he used. The light of the supernova is traveling through space illuminating a piece of the HH objects but not all of them. As the light hits across the HH regions like a series of flashbulbs different parts are illuminated. Several pros I contacted say this is likely. But the movement covers 50 years of time. The entire nebula isn\'t that big let alone these tiny HH objects. I wrote back asking how an echo would need 50 years to move such a short distance? I got some answers but I\'m still lost. To me that UV source has to be constant over 50 years, not a flash bulb and the HH objects really moving. Pros don\'t agree. Maybe a reader can figure it out.

I was having issues with a strong red gradient and didn\'t have the tools back in 2008 to deal with that. Thus the nebula is likely redder than it appears in my image. I need to retake it as I found the source of the red gradient years ago and eliminated it. Since Adriano\'s movie uses my poor color image I haven\'t reprocessed it either. 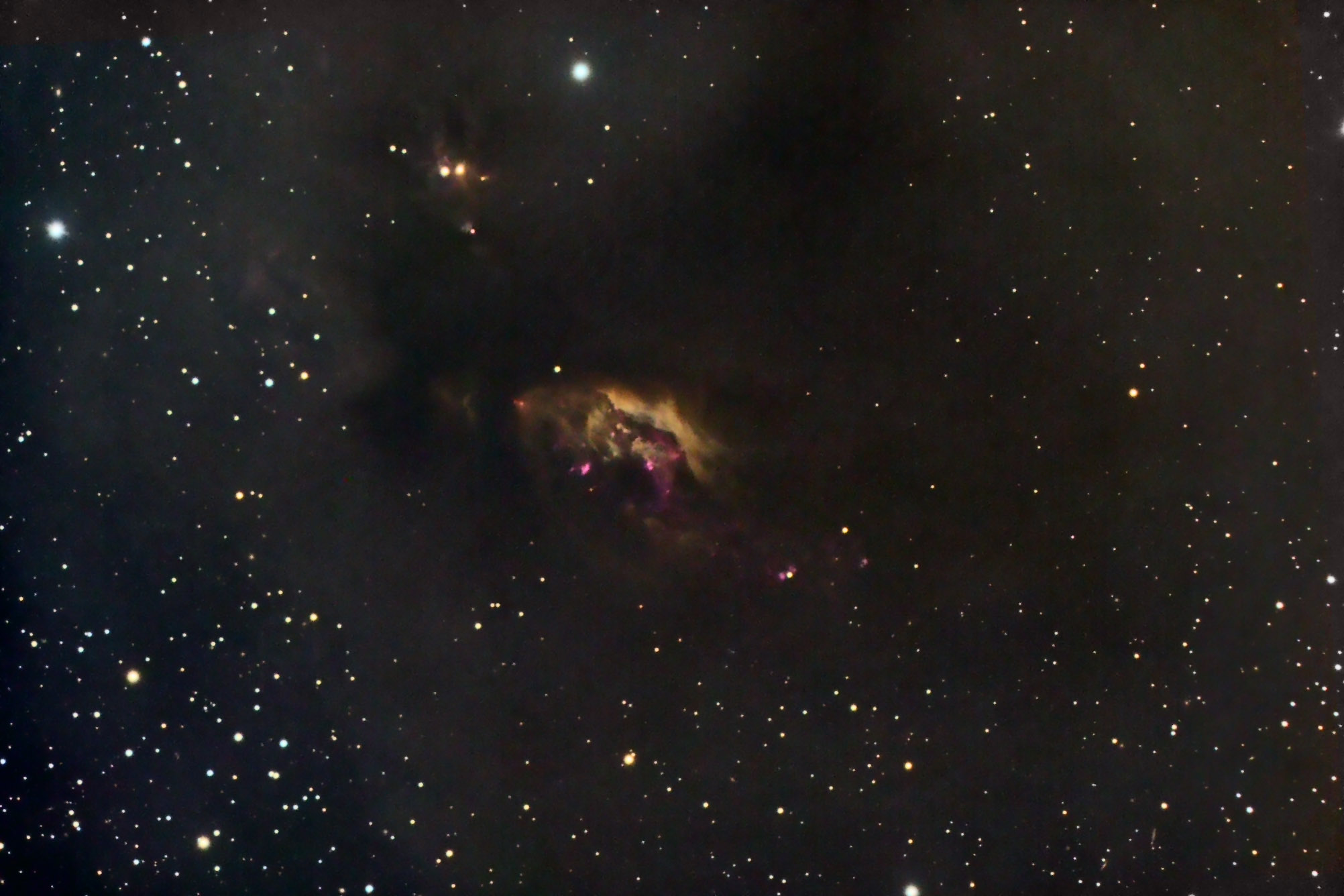